Well – after the briefest of brief hiatuses – I’m back!

Before I dive into what all I’ve been up to these last five days, can we just appreciate this for a moment: 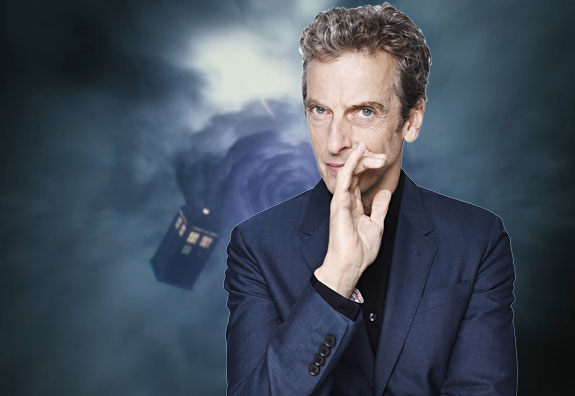 While I am slightly bummed that The IT Crowd‘s Richard Ayoade is not going to be 12, I must say I’m pretty damn excited for Peter Capaldi to take on the role of the newest Doctor. While I’m sad to see Matt Smith leave Doctor Who, he did have a pretty good run and I’m glad he’s not overstaying his welcome. I think Capaldi’s gonna be good though. He looks like he’s gonna bring back some of that Eccelston sass that I’ve been missing oh so much over the years. Plus he’s the most British looking person I think I’ve ever seen. Here’s hoping this Doctor wears a bowler hat and has a Corgi for a companion.

Anyway, moving on, let’s look at what I’ve been up to!

Kathleen and I wrapped up our stay in Rotorua yesterday and are now currently holed up in Napier, a lovely lil’ town on the New Zealand coastline.

Our stay in Rotorua was a good one, albeit rather different than the previous places. Unlike Auckland and Paihia, where we stayed in hostels, we did our first WWOOFing stint in Rotorua. For those of you who don’t know, WWOOFing is World Wide Opportunities on Organic Farms. How it works is simple. You show up at a person’s farm/home/business, work for them for a couple hours a day, and in return they feed you and give you lodgings. The amount of work and number of meals given varies from location to location, but basically all WWOOF places work in the same manner. 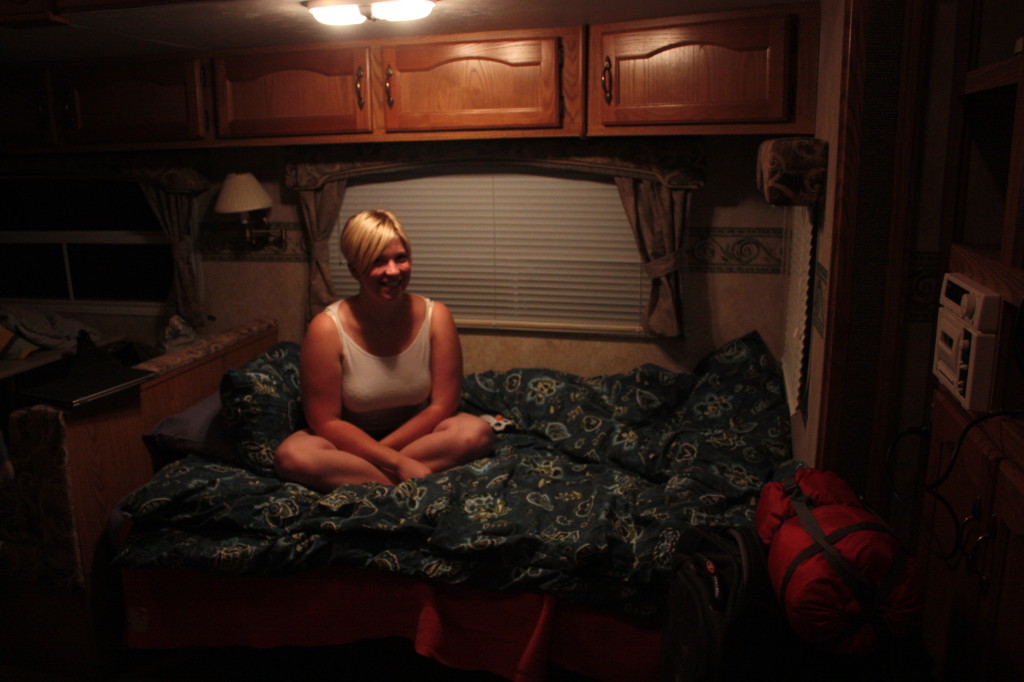 Saying an early goodbye to Paihia, Kathleen and myself took a super long bus ride south – which was quite the ride. Ignoring the child who spent all eight hours on the bus with us, screaming the entire time, there was one incident in Hamilton where four people got left behind at a stop. After the bus driver was made aware that he had stragglers left behind, he begrudgingly turned the bus around. When the forgotten passengers (angrily) climbed back aboard, the bus driver literally said the phrase: “I’m a bus driver, not a babysitter.” I had to try my best not to yell out that he was the Bones of New Zealand.

Dammit, Jim, don’t make me turn this bus around.

We were greeted by one of our two hosts at the Rotorua station. Our first WWOOF hosts were Gerry and Sally, a married couple from Europe who were excellent cooks and farmed bees and cows. Well, just cows, really. Gerry had been a bee farmer previously, but had retired that profession since he placed his ad in the WWOOF handbook. So we were, sadly, not covered in bees during this part of our trip… except maybe with dead bees.

Kathleen was not amused when we found a pile of dead bees hiding under a box.

For the most part, our WWOOF work included moving bee boxes and cleaning out two entire garages. While normally we would have only worked about four hours each day, instead Kathleen and I worked two full days and then had two days completely free. Though the work was grueling at times, there were certain things that made it substantially better. Kathleen and I passed the time by singing lots of Book of Mormon and Lonely Island songs, and there was a part in our first day of work where a possum definitely popped out of a box and made Kathleen scream. Best of all, we ended our last day of work by making a huge bonfire with all the trash we had collected, and then we got to stand on the bed of Gerry’s pickup truck while he drove super fast through their large field. It felt like an amusement park ride – only better.

Oh, and I also learned that I should never use the phrase “I have no upper body strength” as an excuse with a WWOOF host, because it pretty much guarantees that the host will then make me do all of the heaviest lifting. 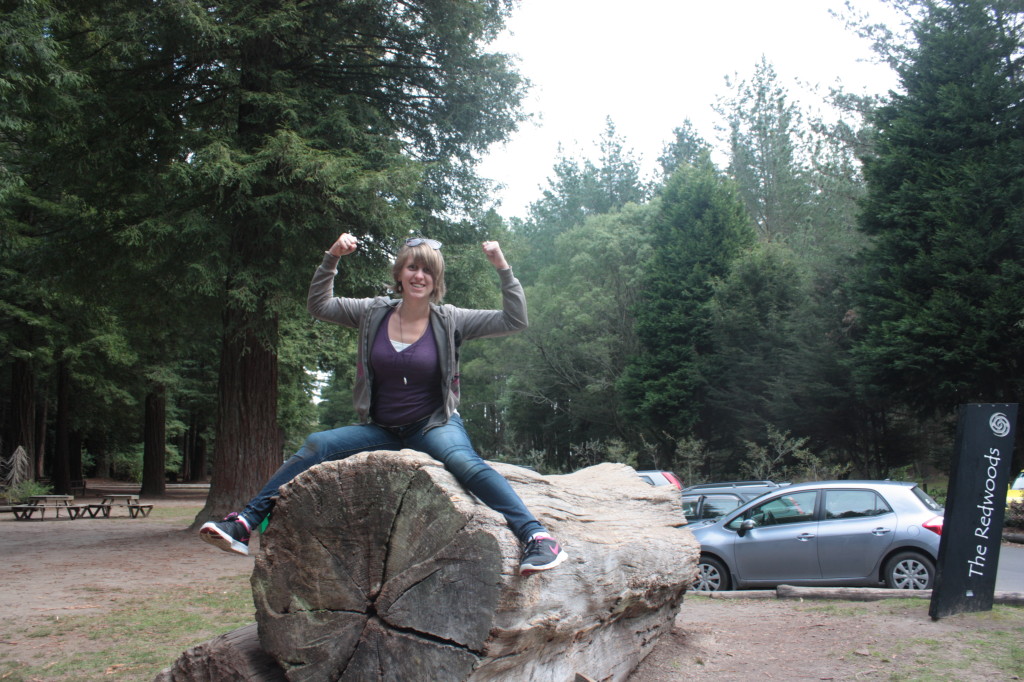 Those are not the arms of someone who can lift a wood saw on her own.

Also worth noting, Gerry and Sally owned quite a few of these guys: 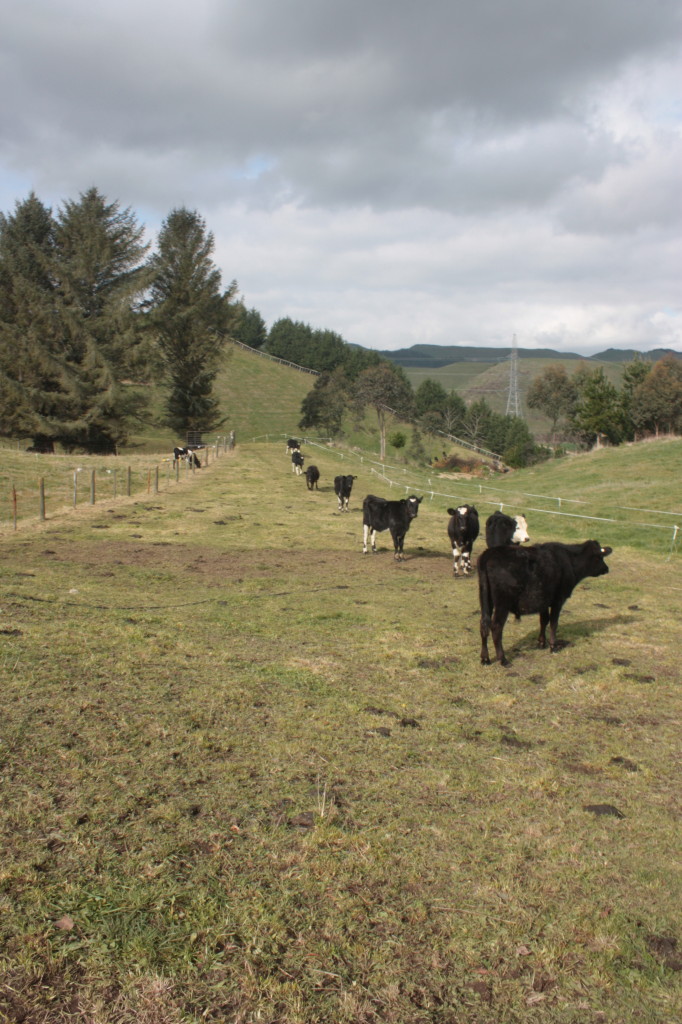 We mainly spent time with Daisy and three young calves. We had to make sure that Daisy would let the two calves that weren’t hers nurse and not kick/headbutt them away. I can now officially say I have wrangled a baby calf. Checking that one off my bucket list. 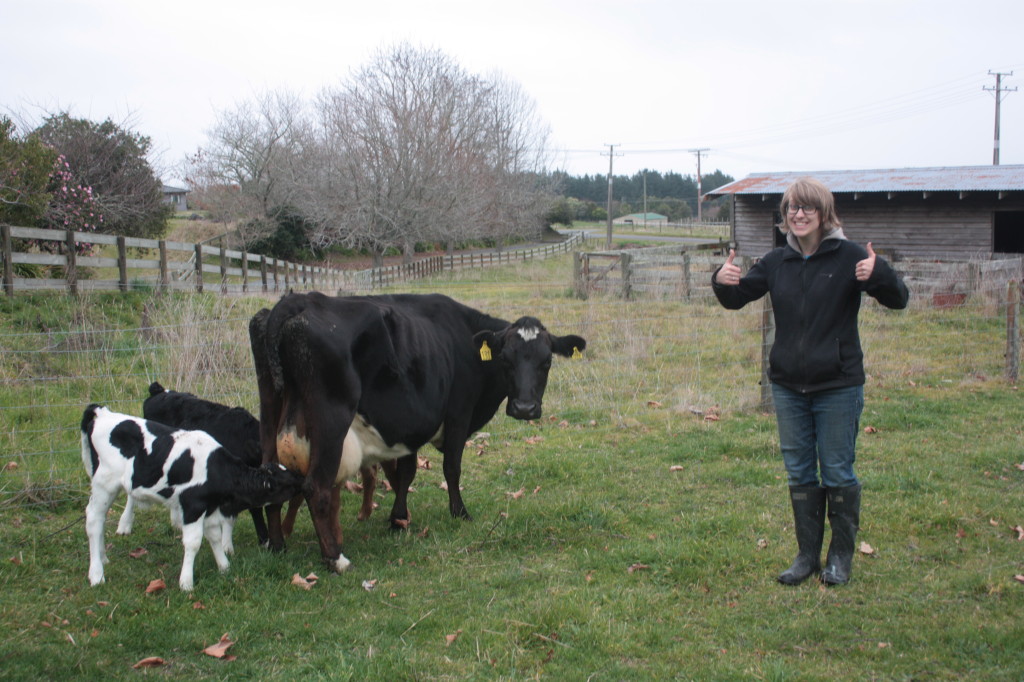 Our first day off of work we went into Rotorua’s downtown area. First we checked out their museum, which focused mainly on Maori culture and the history of Rotorua’s hot springs. Apparently back in the day it was thought that the hot springs there had magical healing abilities, so people came from all over the world to the Rotorua bath house to “take the cure.” While I doubt it actually had healing properties then, let alone now, it was still interesting to learn about. 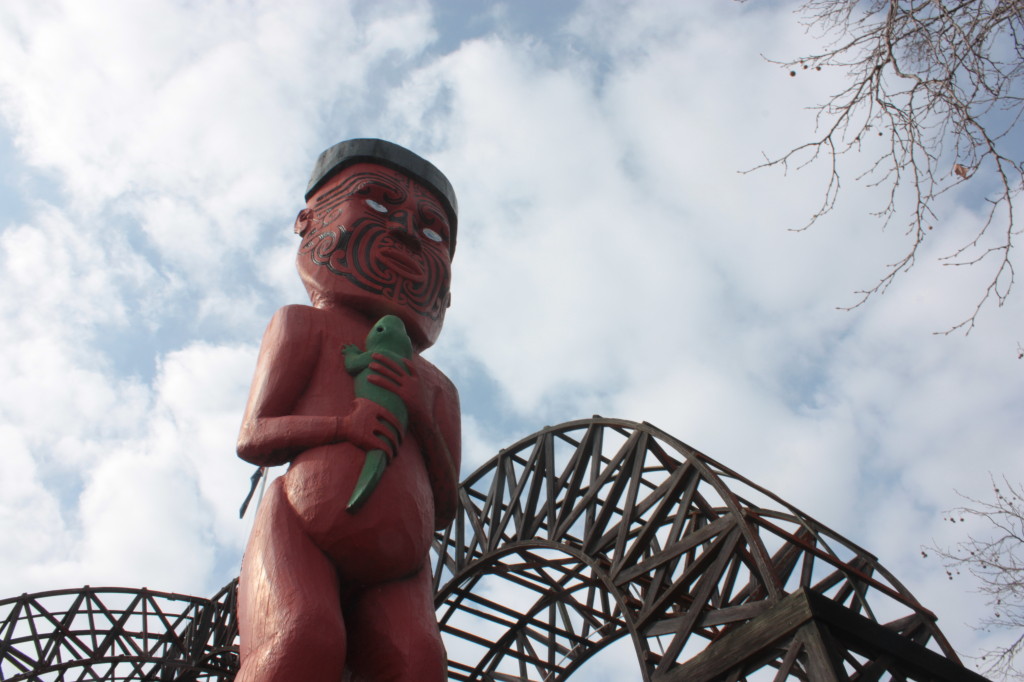 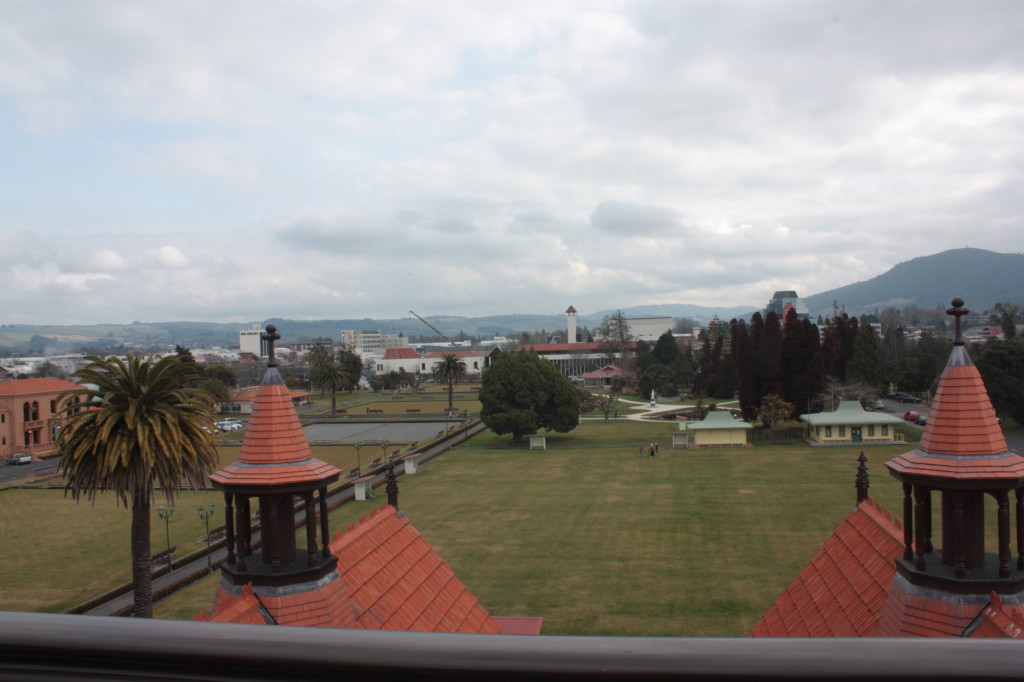 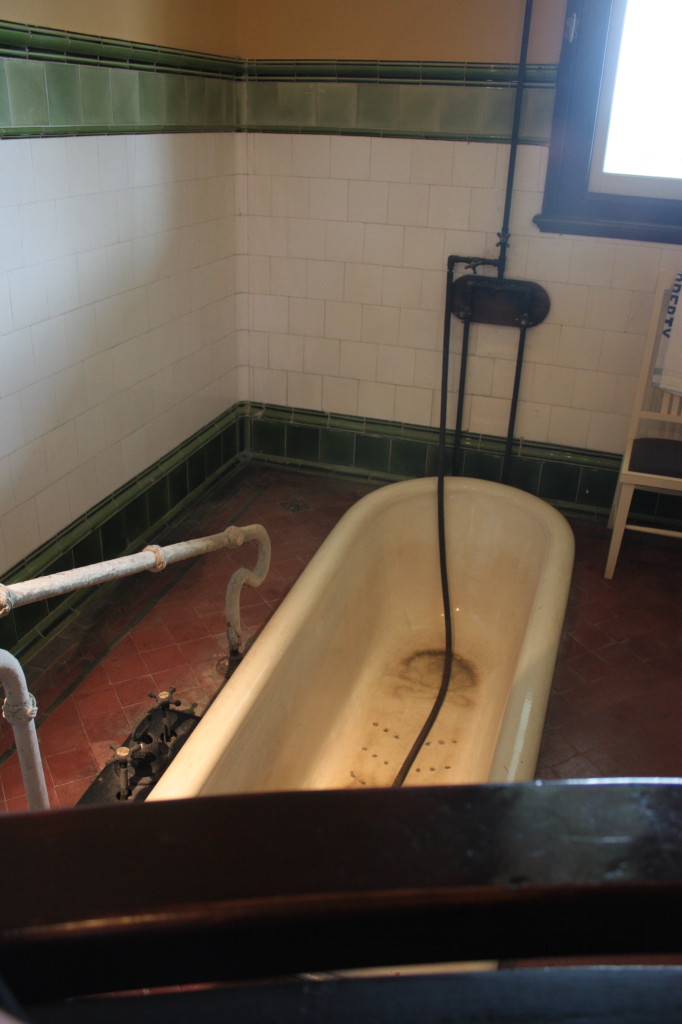 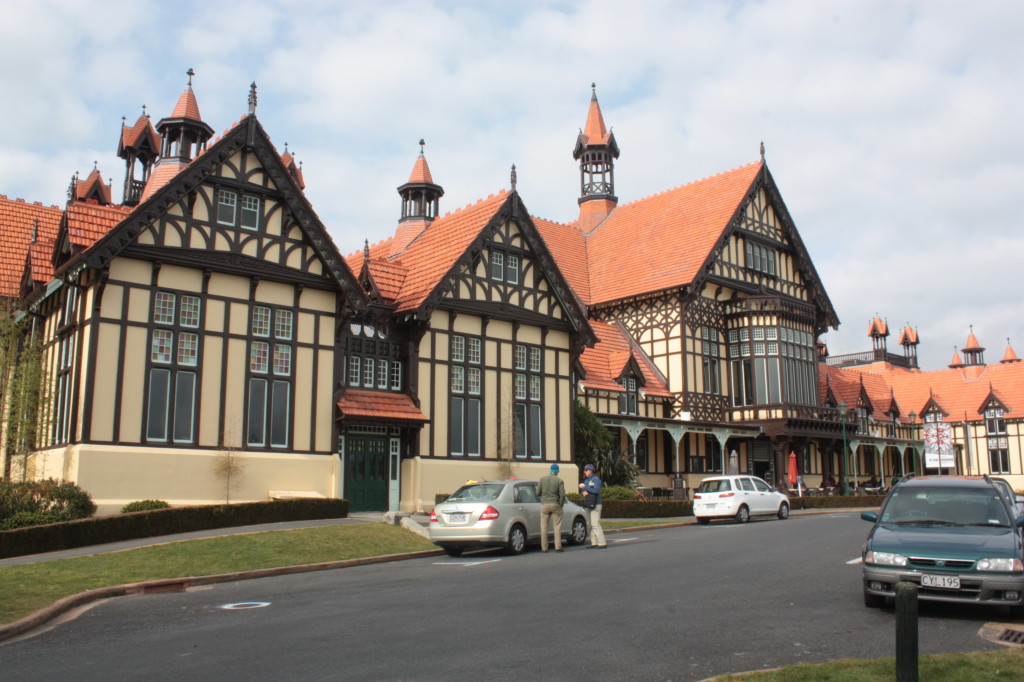 Plus the museum definitely had a short film which featured a devilishly young Bret McKenzie. What’s not to love about that? 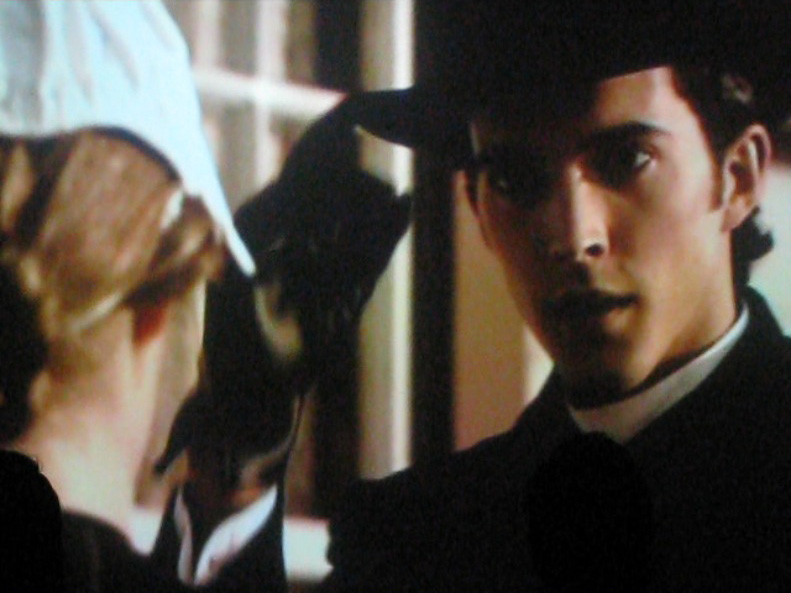 I was disappointed when Jemaine failed to appear as well.

After the museum, Kathleen and I headed over to these so called magical hot springs. Although people were all about jumping into the springs back in the day, nowadays they’re fenced off – and for good cause, seeing as they’re all boiling hot. It was still cool to see nonetheless, even though we couldn’t touch (and they all smelled like rotten eggs). We also saw a mud pool, which Kathleen was super jazzed about. 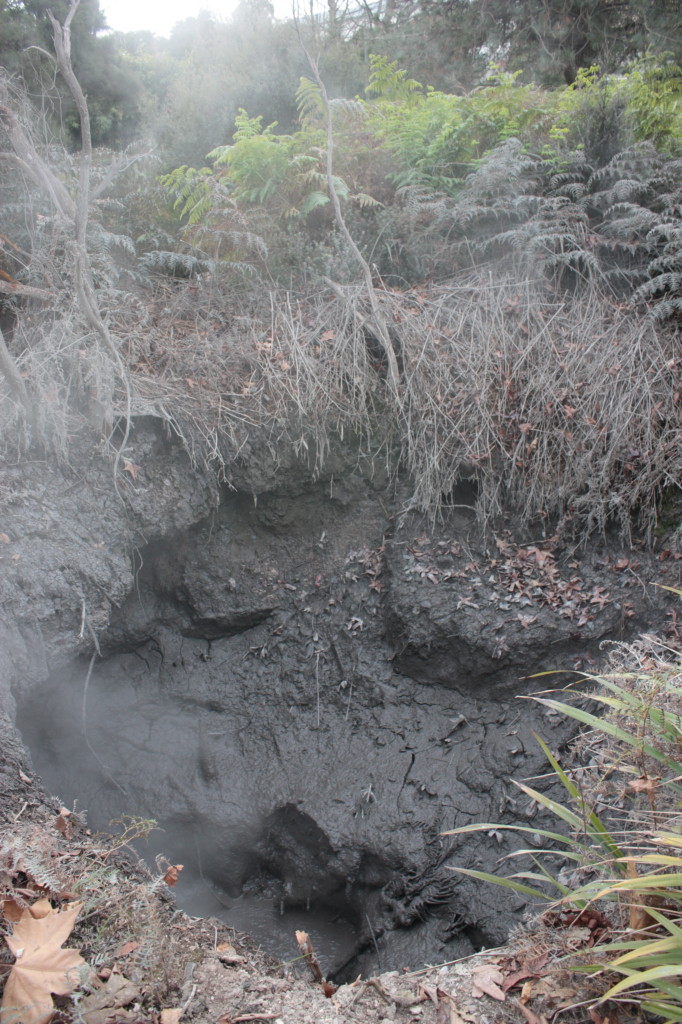 On our second free day we checked out the Redwood Forest. It felt just like we were back home. Except with more ferns. 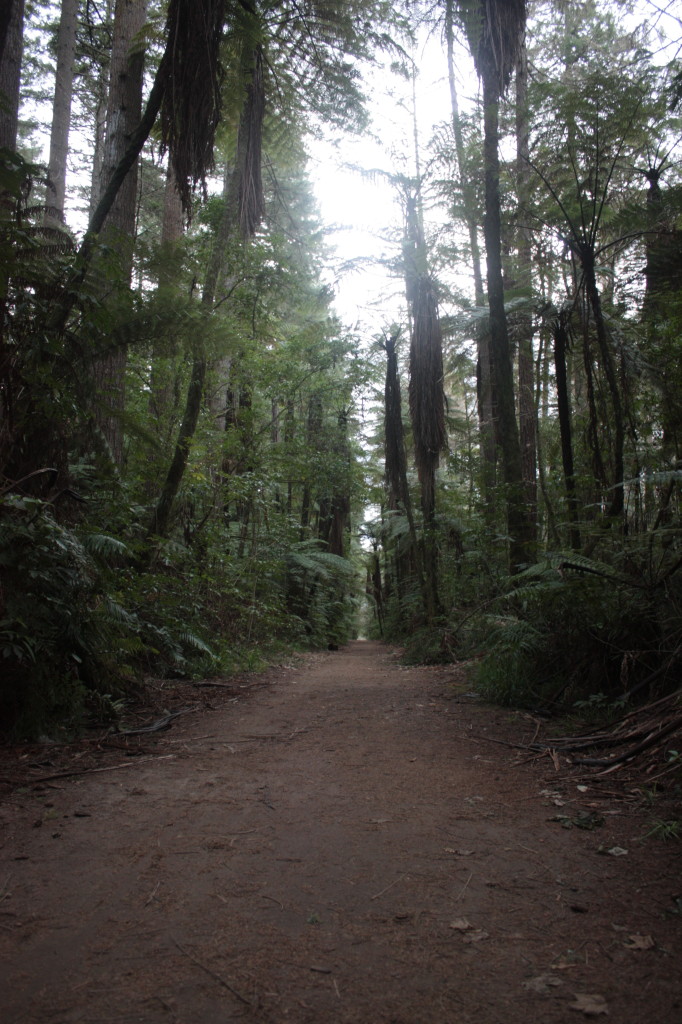 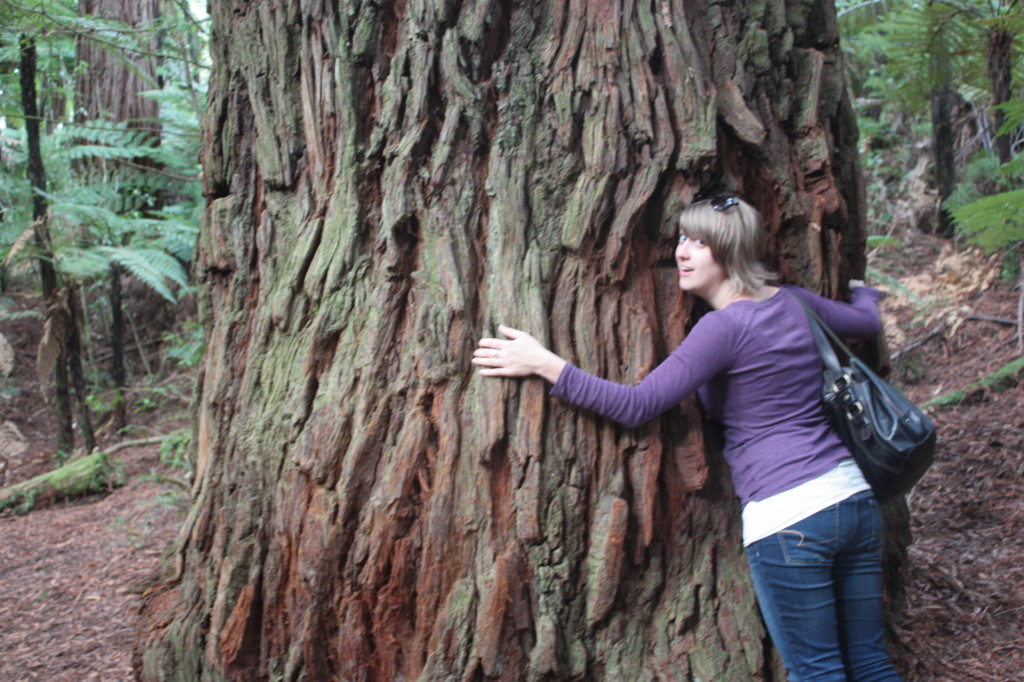 We also made plenty of friends during our walks around Rotorua. 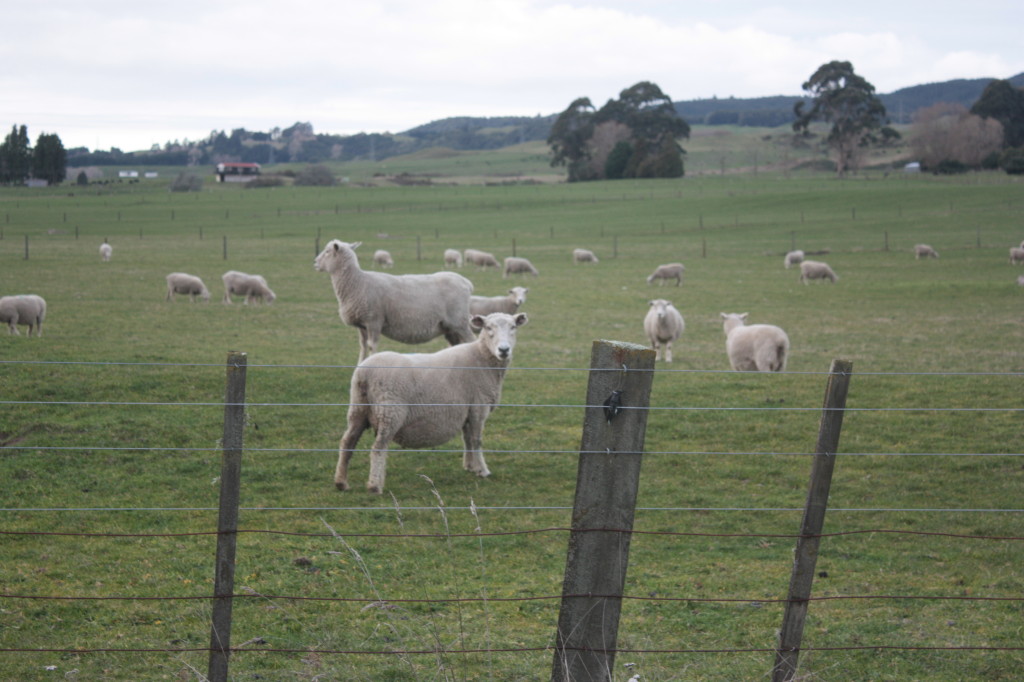 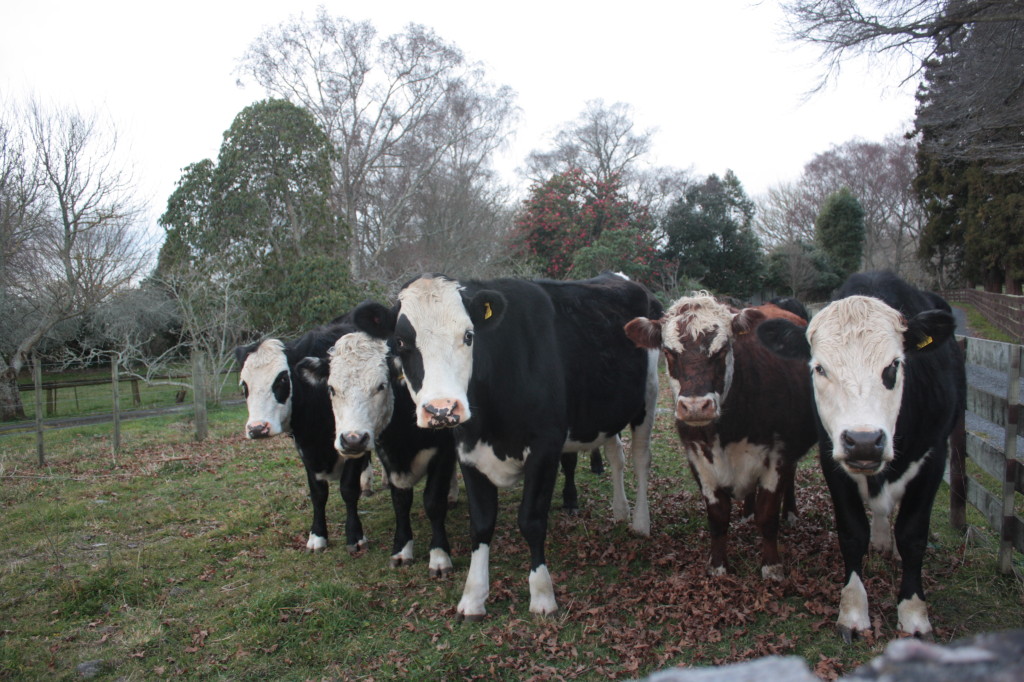 Rotorua as a whole seemed like a great town, and I’m eager to go back at some point during my travels. While our first WWOOFing experience was stellar and we’re eager to WWOOF some more, since we were a ways out of town I feel like I didn’t get a chance to see all of Rotorua – or, at least, as much as I would have liked to. I’m definitely bummed I missed out on the buried village and the thermal village. I don’t think Rotorua’s where I’ll settle when I get to that point in my journey, but it’s still worth a return visit.

Anyway, yesterday morning we arose bright and early to get prepare for our trip down to Napier. We got all packed up, cleaned up after ourselves, and were off. Our hosts gave us a ride down to the closest bus stop, which would then take us to our large InterCity bus to Napier. Kathleen and myself had meant to ask Gerry or Sally for a ride to our Napier bus, but for some reason hadn’t. While it seemed like an inconvenience at the time, we sort of just shrugged it off. Oh well, not much we could do. We’d just take the city bus there. Everything would be fine.

… Except that the city bus was late.

We were phoneless and had no way of contacting Gerry and Sally to come rescue us, and the InterCity bus stop was way too far away to walk to at that point. With only a half hour until our bus would leave Rotorua without us, I attempted something I never thought I would. 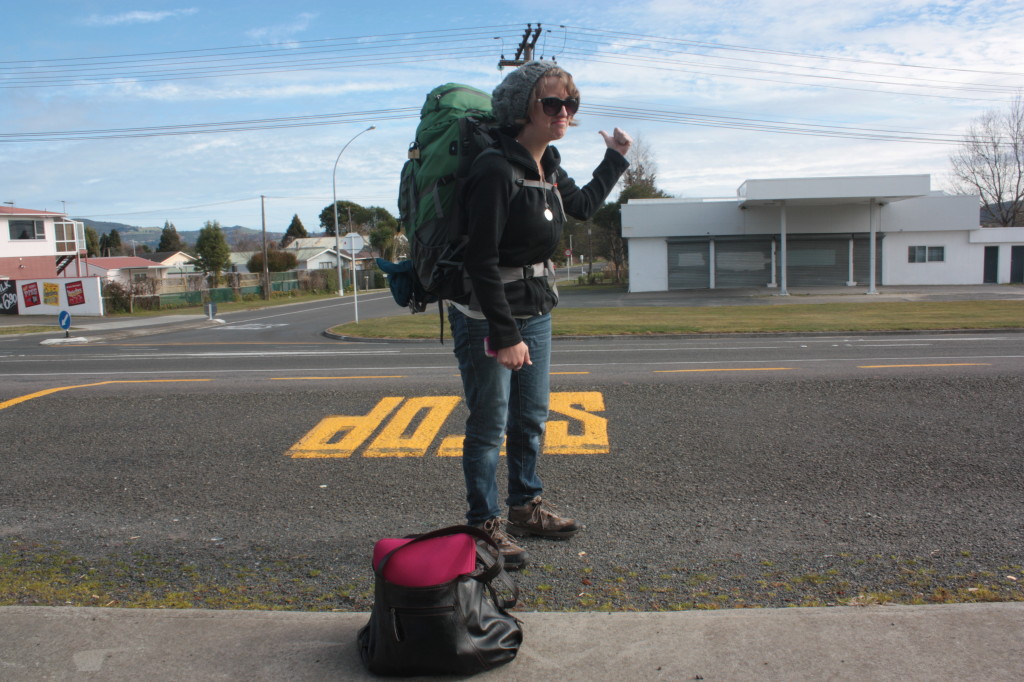 Two weeks in and already hitchhiking attempts have happened. This does not bode well.

I learned quickly that I’m a pretty awful hitchhiker. Not a single car pulled over for us – probably because of how god-awful grumpy I looked. It’s a good thing no one had their car windows rolled down as they drove by, or else they would’ve heard some not-so-nice things yelled in their direction (Gerry commented about how he’d bet that Kathleen and I “don’t know how to curse,” but if he had been there oh how I would have proved him wrong in so many ways). After a good ten minutes of waving my thumb in the air, lady luck finally smiled on us and our bus arrived. We managed to make it to our InterCity bus with ten minutes to spare.

I told Kathleen earlier today that, surprisingly enough, the bus rides are some of my favorite parts of our New Zealand travels. Whenever I’d take Greyhound in Oregon I’d spend the entire time reading or sleeping to make the time go by faster, but with InterCity buses here I find myself just continuously staring out the window. The scenery is just so goddamn beautiful. The humungous rolling hills. The miles upon miles of livestock. And damn is that grass green. 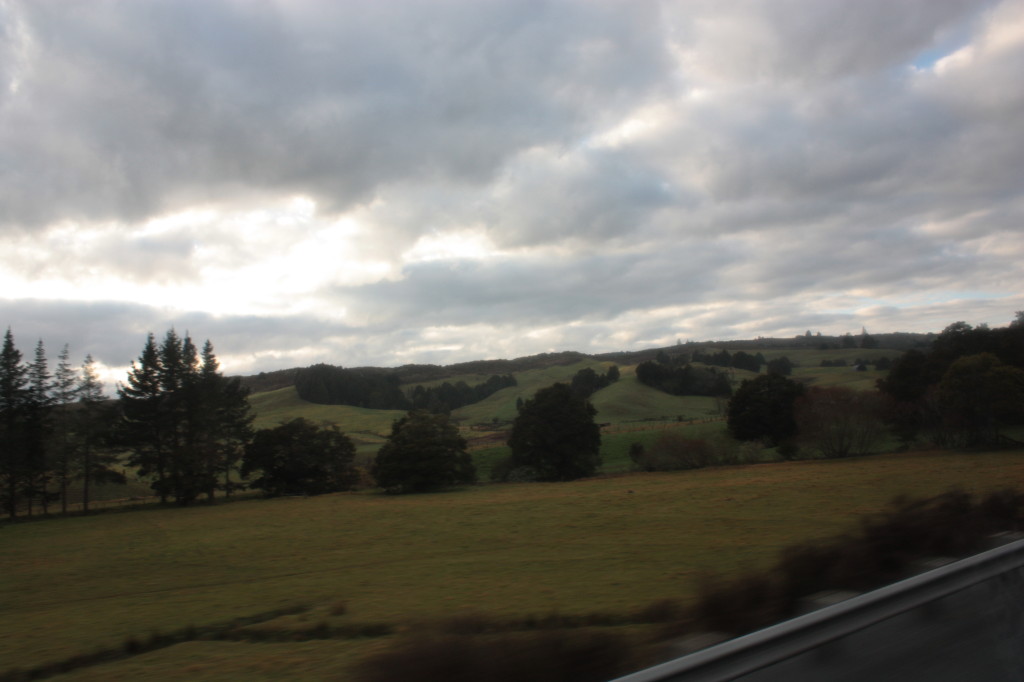 When we got into Napier yesterday it was raining, overcast, and incredibly foggy – so basically Oregon coast weather. We bummed around the beach and town, then went out to an American themed restaurant and had two pitchers of margaritas. The makings of a great evening. 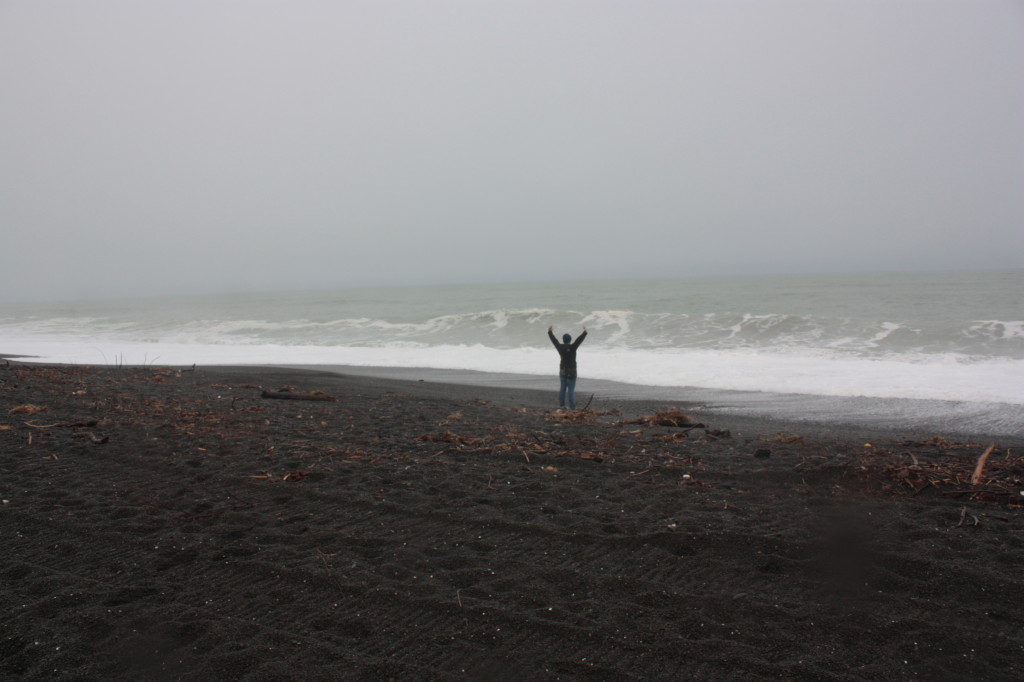 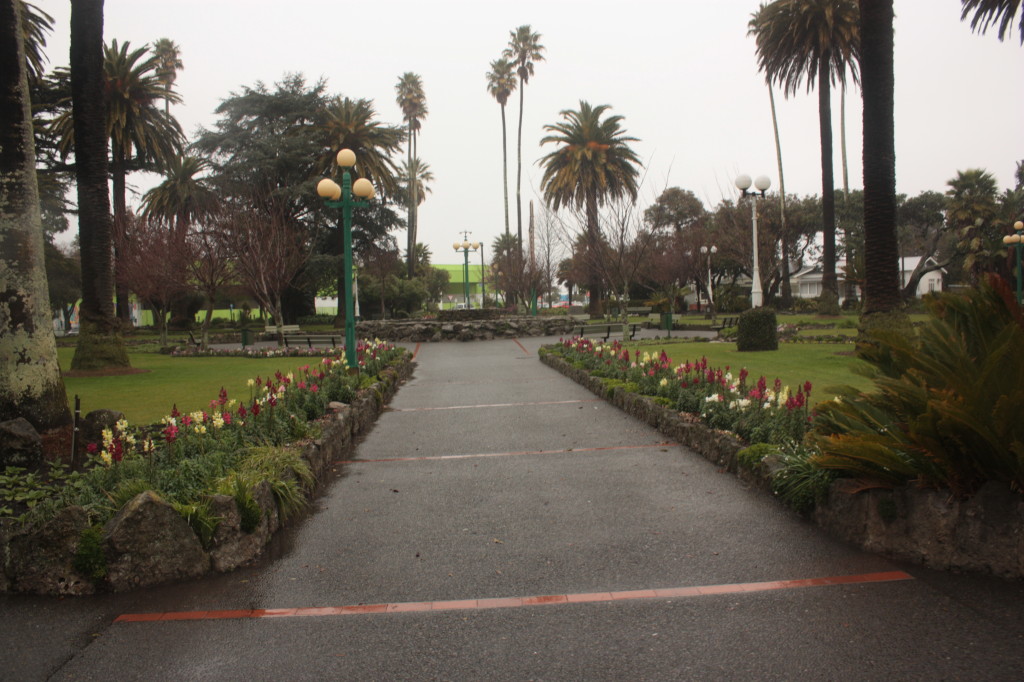 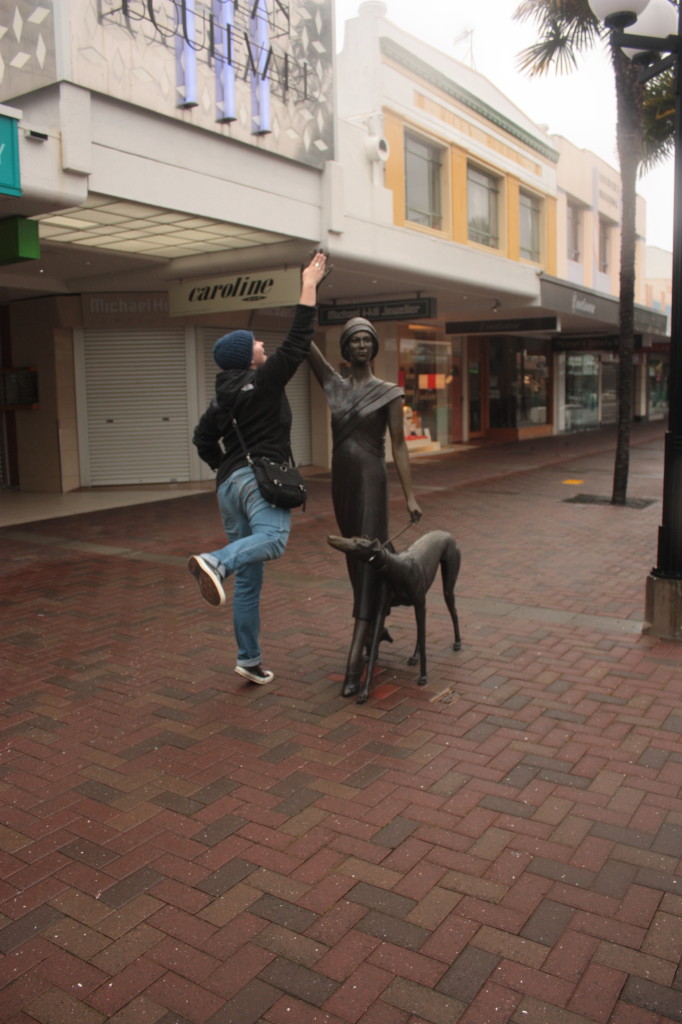 Today started out as an errand running day of sorts. We went to the local supermarket chain store, Pack n’ Save, to buy food to save some money, I finally bought a New Zealand phone, and I purchased a new tanktop to replace one I’d ripped (and, all right, maybe I caved and bought a hoodie because it was kind of super cute… ugh).

After that we headed to the National New Zealand Aquarium, where we witnessed sea turtles, seahorses, piranhas, sharks, and a really cute guy holding some really cute penguins. 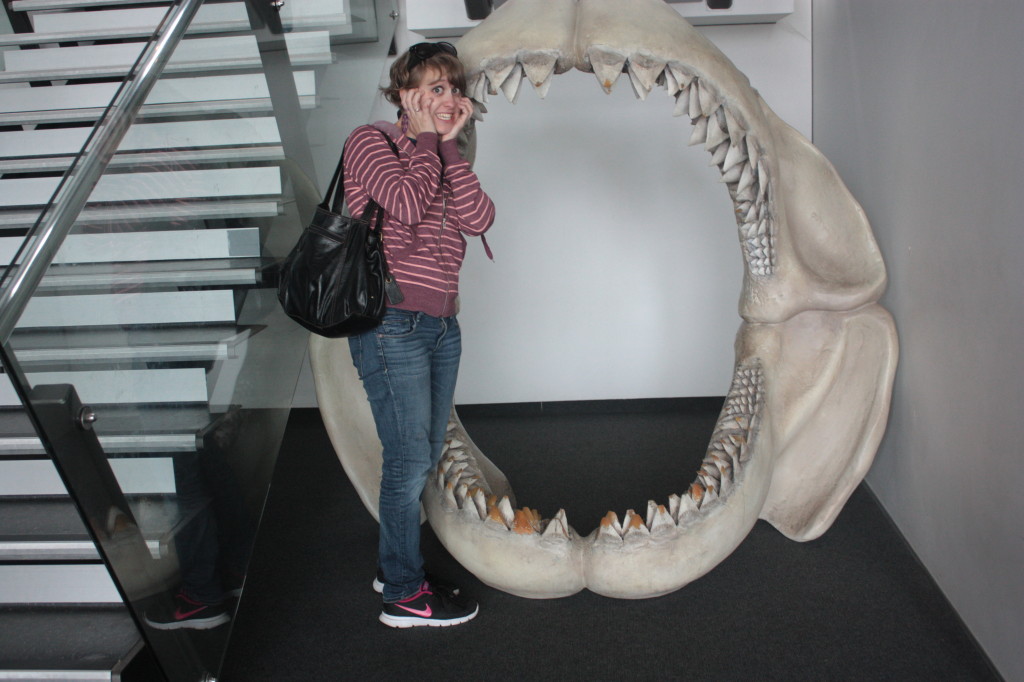 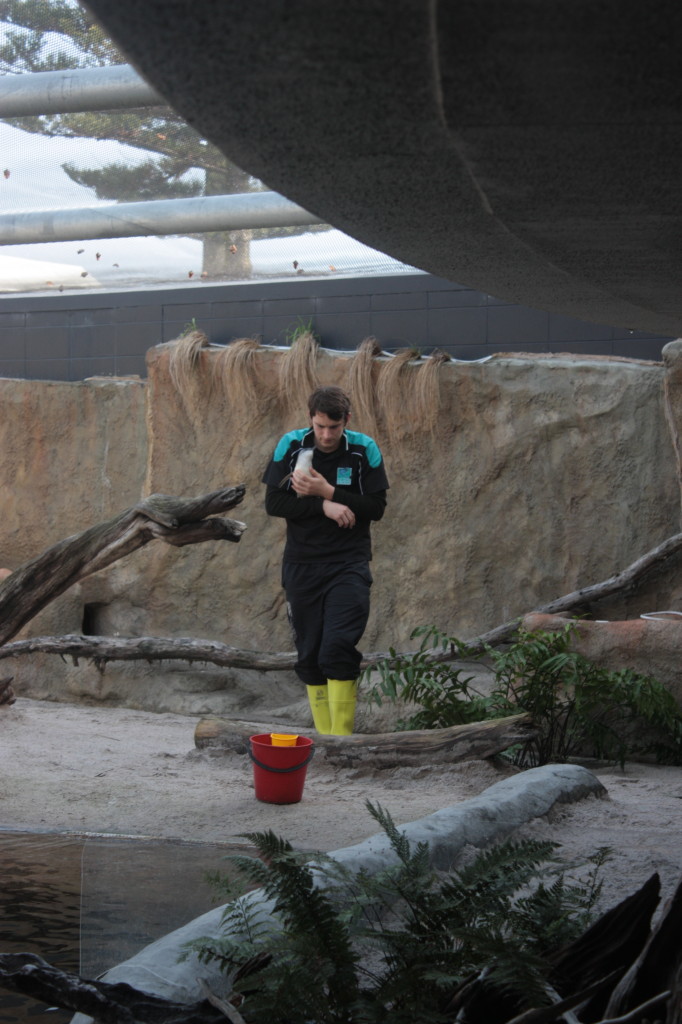 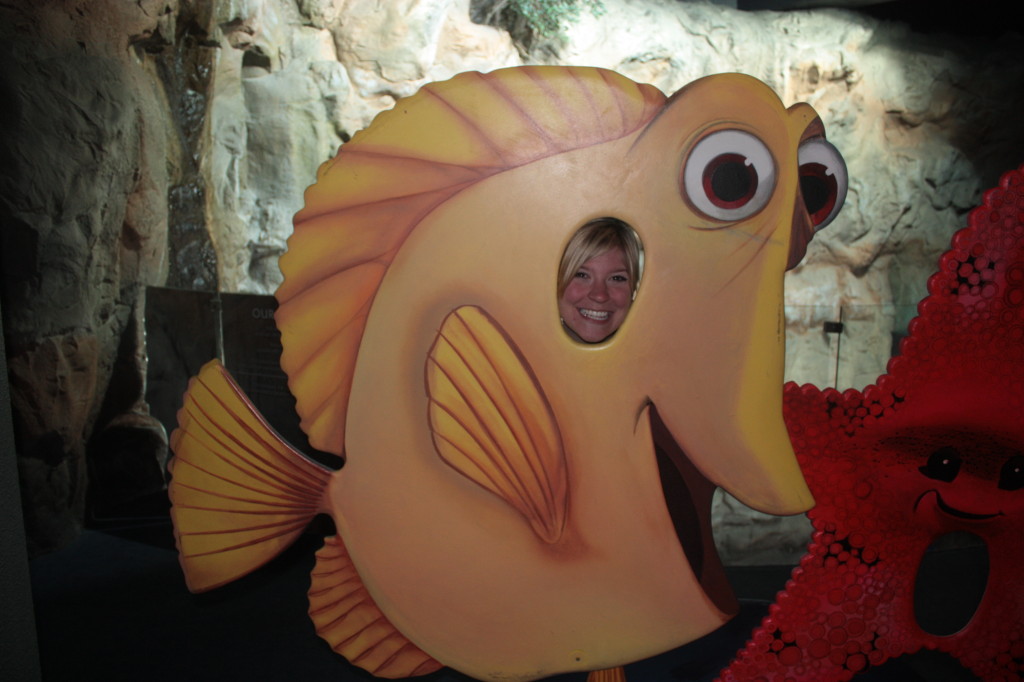 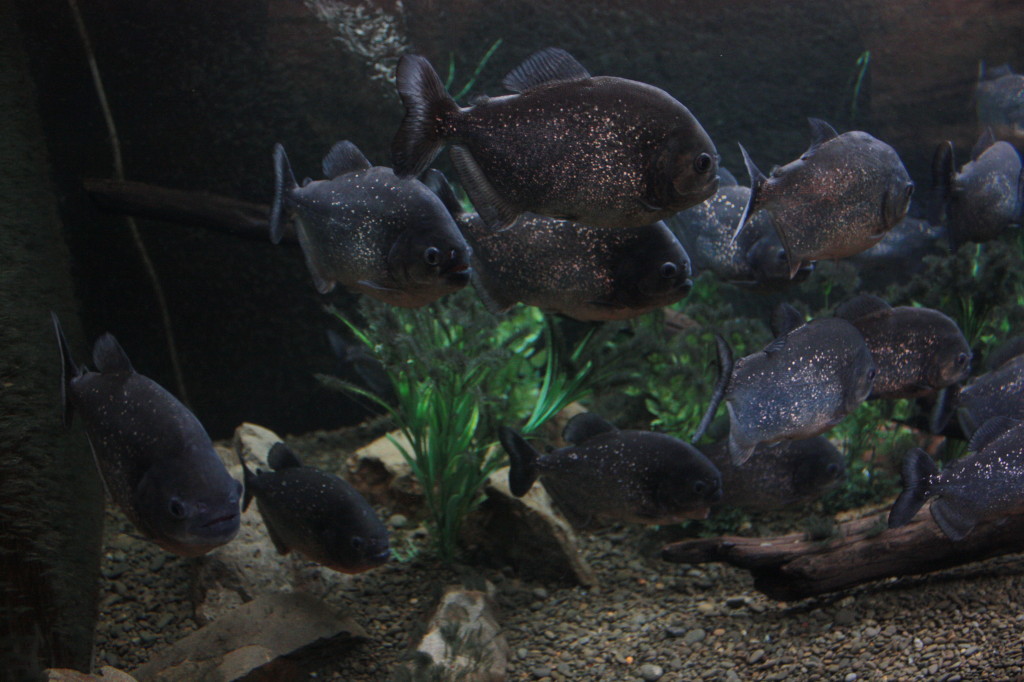 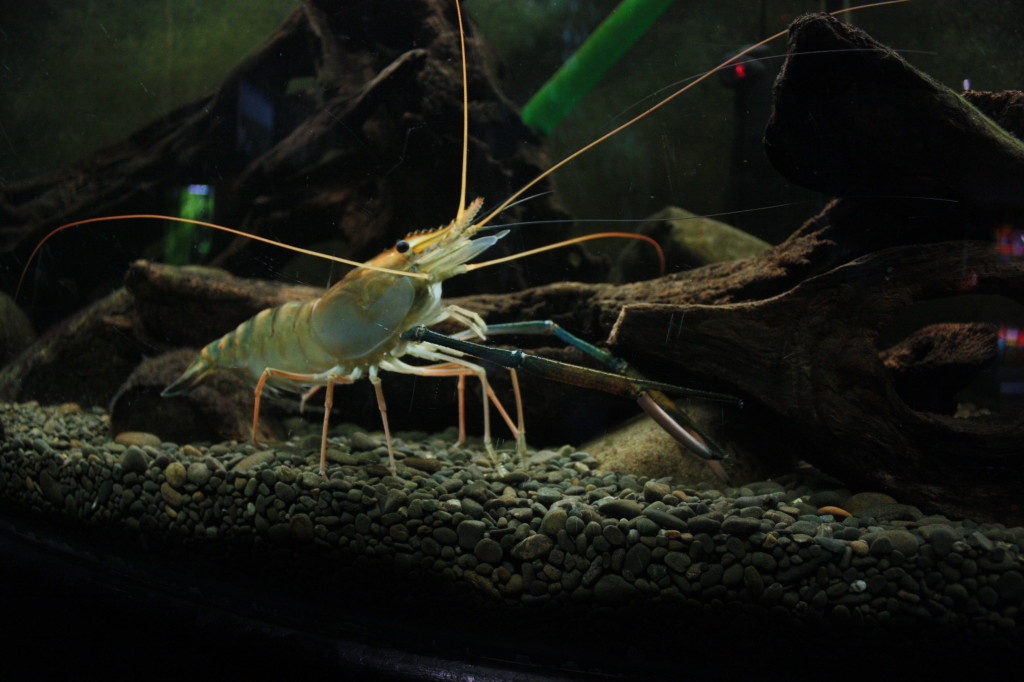 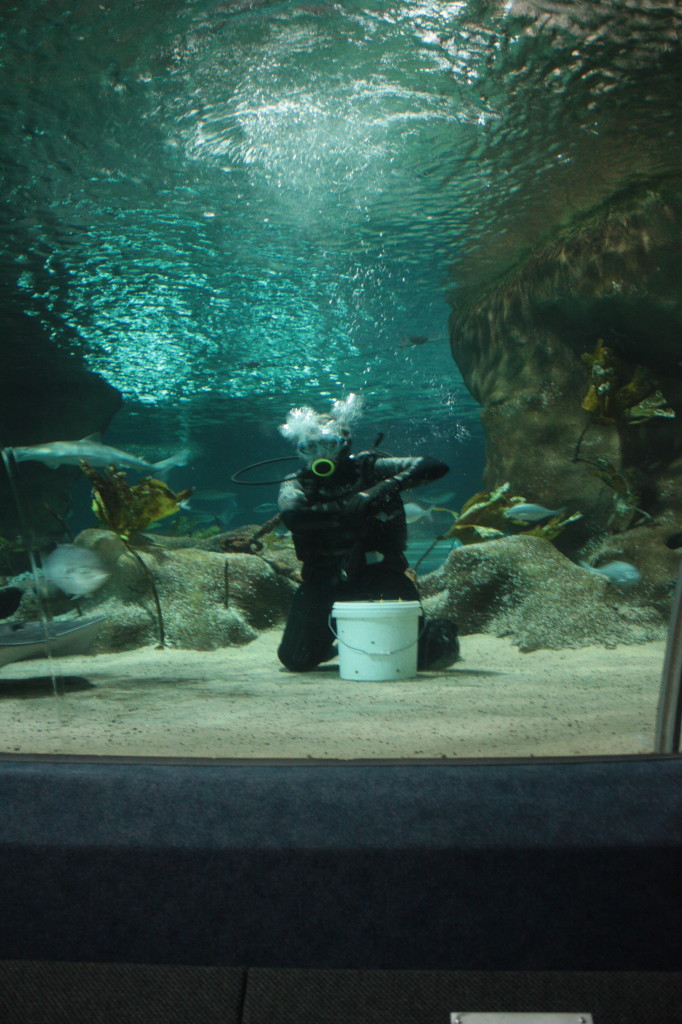 I’d love to have “shark feeding expert” on my resume too.

We also met a dude who worked in the Aquarium gift shop who friggen worked on the Hobbit films. He did some prop work for several weeks, and he’s met a ton of the Hobbit actors. When he told us he’s good friend with Jed Brophy I literally clutched my face and had to stop myself from screaming. The guy gave us some tips about certain Hobbit things to see and tours to take in New Zealand, which was just wonderful of him.

I will meet you someday, oh spry bastard.

And yes! That’s basically the blunt of what’s happened since my last entry. Kathleen and I spent the night in, eating delicious mac and cheese, drinking shitty wine, and watching Moulin Rouge. 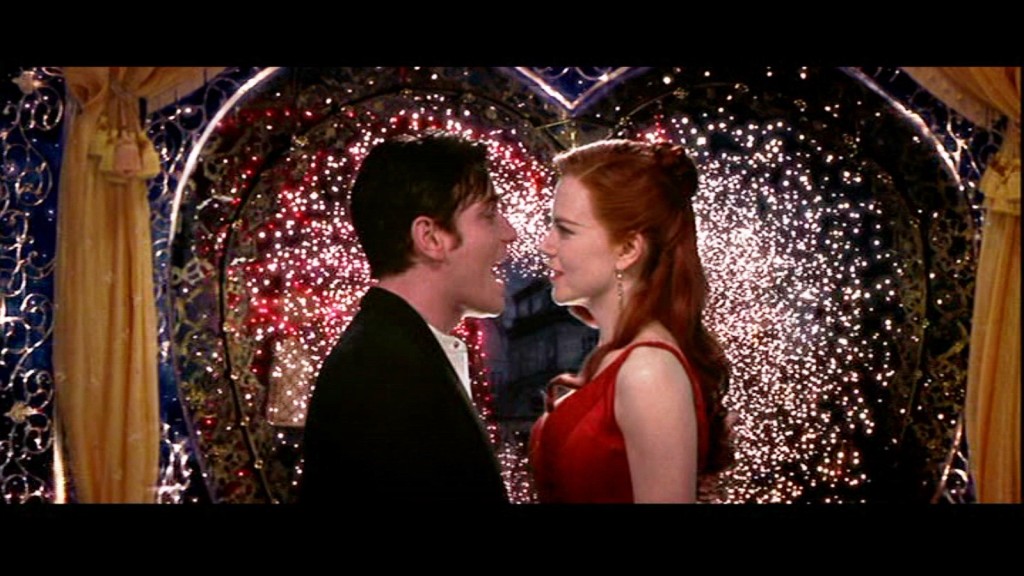 Cue the buckets of tears.

We’ve got one more full day in Napier, and then we’re going down to Wellington at long last. We potentially may have a WWOOF place to stay for the first few days in Wellington, but we’re still waiting to hear back to confirm the stint… so fingers crossed. Either way, we’ll definitely be on the south island at some point next week! 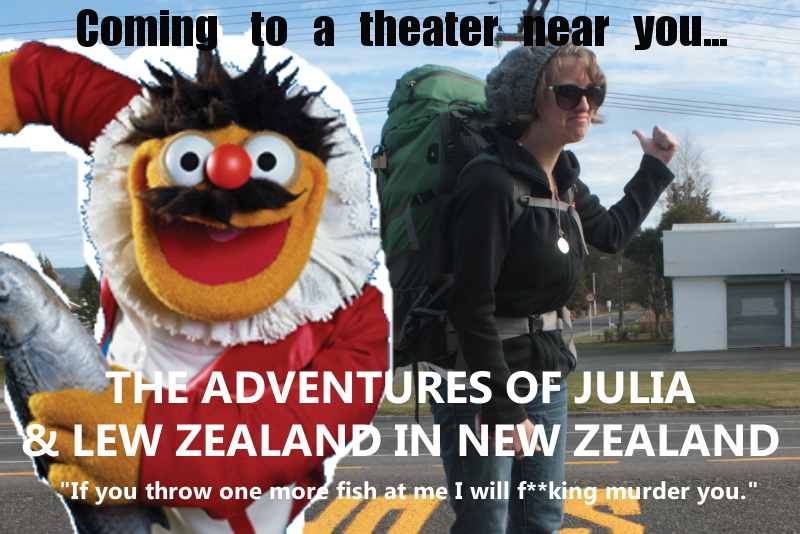