Sorry that I fell a bit off the band wagon this week (and by that I mean I missed two entries). I wish I could say it’s been a hectic week and that’s why I missed blogging on schedule, but it really had more to do with the fact that I was completely WiFi-less earlier this week. Anyway, let me now regale you with tales of WWOOFing and our time back in Wellington. 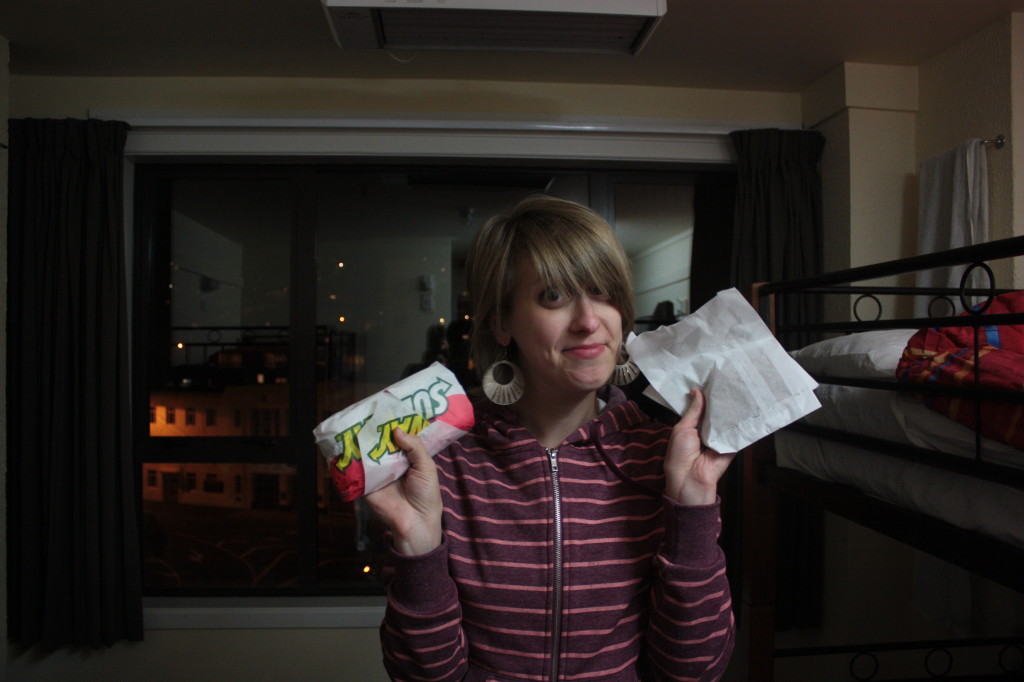 Me with some fine New Zealand cuisine. Delicious!

So Kathleen and I did our second WWOOFing gig this last weekend and earlier this week. We worked at a place called the Lodge, which was a nice place that specialized in hosting weddings, conferences, events, etc. etc. The plan was to catch a train out to Paramata, meet with our WWOOF Host, and then head on over for our stay.

We were running a little bit late the morning of, and only just barely made the train. I suppose I should mention that on the way to the train my entire water bottle spilled in my purse, all over my nice camera and my brand new New Zealand phone. This led to a lot of tears and frustration on my part. I’ll skip to five days later though and report that – thank goodness – the phone and camera ended up being all right. I left them off for the duration of the WWOOFing stint, and once I flipped them on again in Wellington they were good as gold. So thank goodness for not spending a ton of money on a new camera and phone!

Since my camera was out of service during our time WWOOFing I don’t have too many pictures of the place we stayed at; however, I did manage to snag some cell phone pictures. So there’s that at least.

YOU SHALL NOT PASS.

The work we did at the Lodge isn’t all too interesting to write about, so let’s just say there was a lot of raking, law mowing, weeding, more raking, pruning, moving logs, and even more raking. It was hard work – much harder than the place we stayed prior and WWOOFed at.

The most interesting part of our work days though? Our good friend, Umbridge.

Yes, Umbridge is a chicken. I’m sure she had another name, but we dubbed her with this new name. The name came about because we were listening to A Very Potter Sequel songs and she wouldn’t stop following us around, so we kept thinking of the “Did you get my text? Well you didn’t text me back” bit, thus Umbridge came about. She literally followed us everywhere.

Also, we were kind of obsessed with touching her butt? Don’t ask.

SHE TOUCHED THE BUTT.

There really wasn’t much to do in the Paramatat area. There was a little area with a convenience store and a cafe, but that was about it. We took a walk around a lake, which was absolutely beautiful, and all of the surrounding views at the Lodge were gorgeous. So, although we lacked WiFi, at least we were surrounded by a lot of beautiful landscape. (We also discovered that New Zealand candy is really goddamn tasty. Like, REALLY tasty. America needs to get on that.)

If you don’t love this movie then you can just GTFO.

The best part of the entire time we were WWOOFing was the first night, oddly enough. As our WWOOF Host, Peter, was driving us to the place, he mentioned his son was throwing a party that night. We were skeptical about what his definition of party was, so we resolved to just drop on by quickly and see what it was like.

We ended up staying till 3am.

Needless to say, it ended up being a lot of fun. We met a lot of really great people and made a friend or two. Dancing, drinking, slap threats, “I’M INTERESTING”, golf ball guesses, and a bear hat basically sums up the entire night.

Anyway, we’re back in Wellington now. We got back two days ago, and we’ve spent the last two nights watching Holy Musical B@tman and A Very Potter Musical. Basically, a lot of laughter has ensued.

But best of all? My camera – as already mentioned – ended up being fixed! 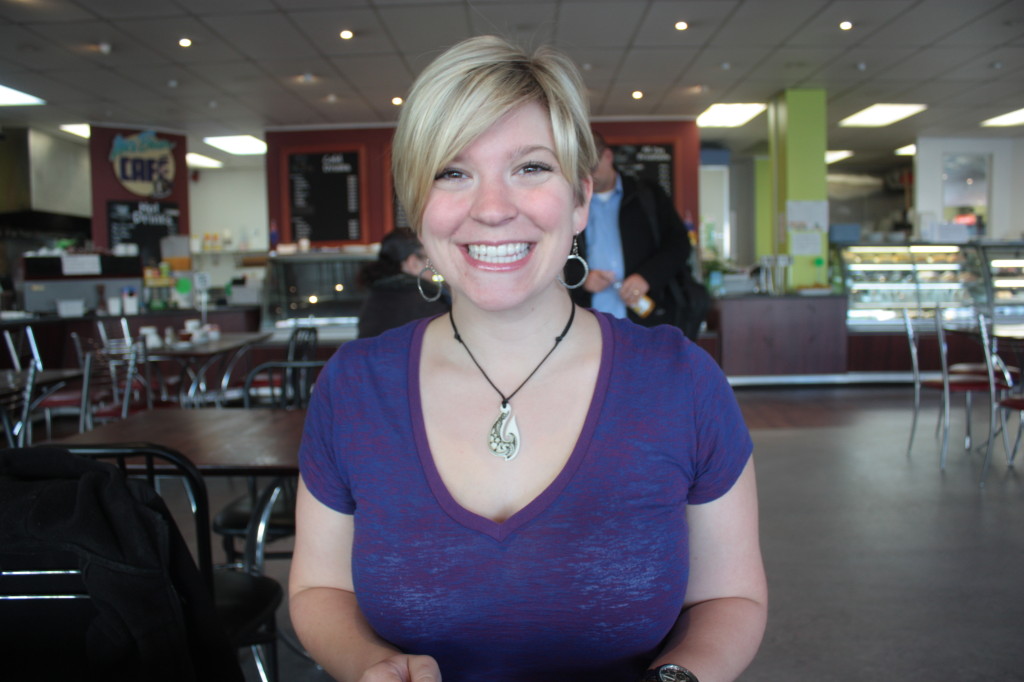 Yesterday we sort of just wandered around the city and had a lazy day. We went into a lot of shops on Cuba Street, which seems to be a great little area. I bought myself a cool chapbook that I found, which has gotten me thinking about trying to make another chapbook for all my poetry. We’ll see!

Today we attempted to be a bit more productive, but the Film Archives weren’t exactly as exciting/time consuming as we had hoped they’d be. We did manage to go up to Wellington’s Botanic Gardens and walk around for a good long while, then when taking the Cable Car back down we had to get out due to an earthquake that I definitely didn’t feel because I’m the least observant person in the world. So that’s something, yeah? 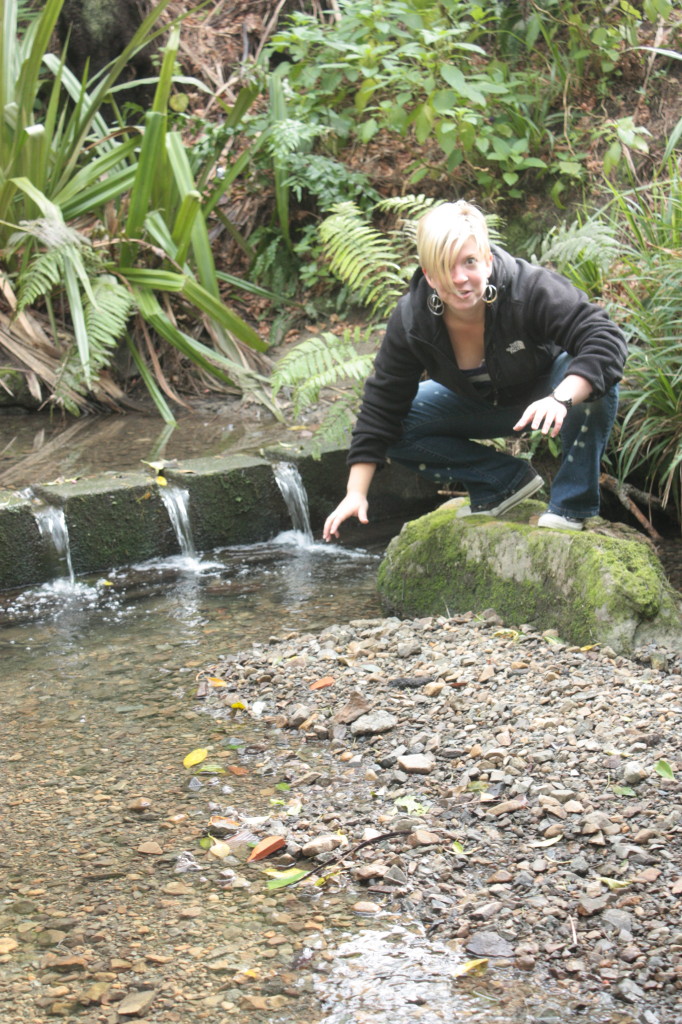 A Kathleen spotted in her natural habitat. 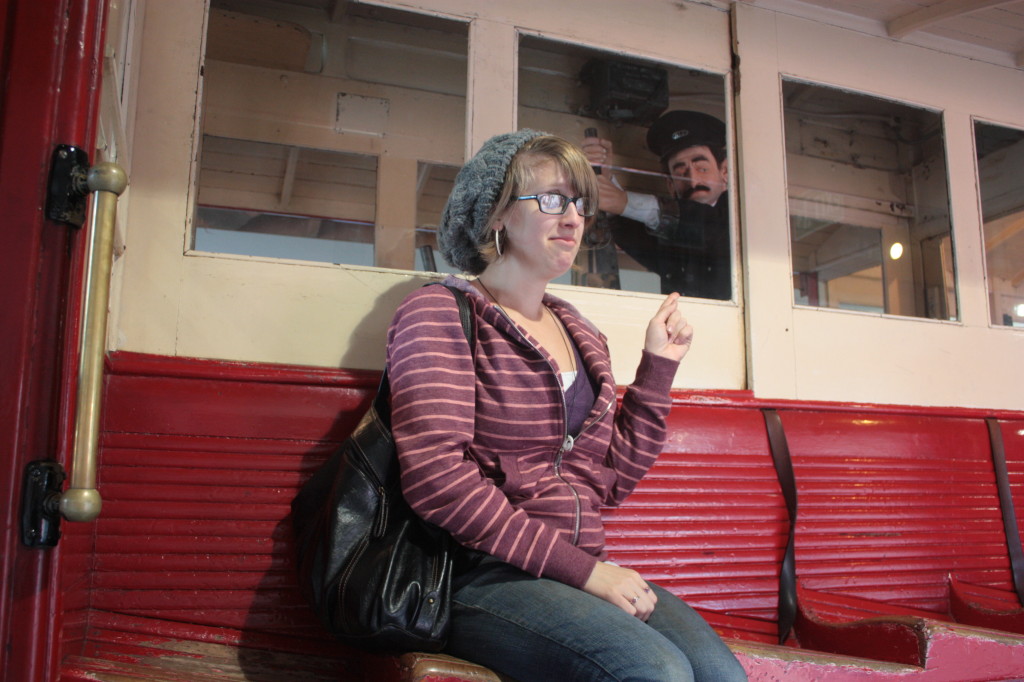 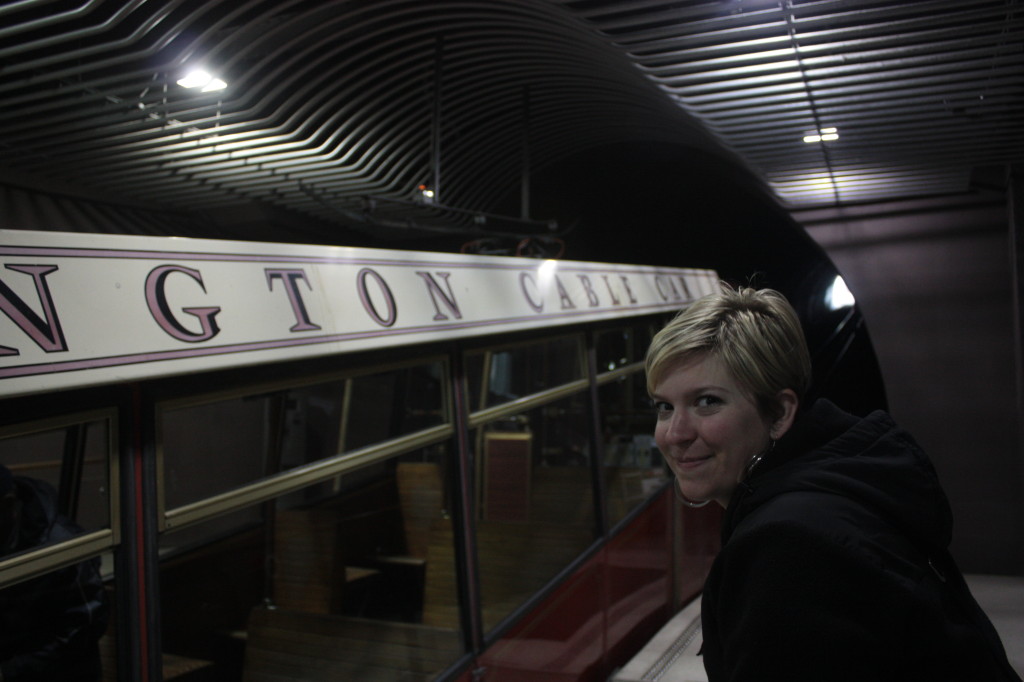 John Green is a higher seller than the Bible? I love it. 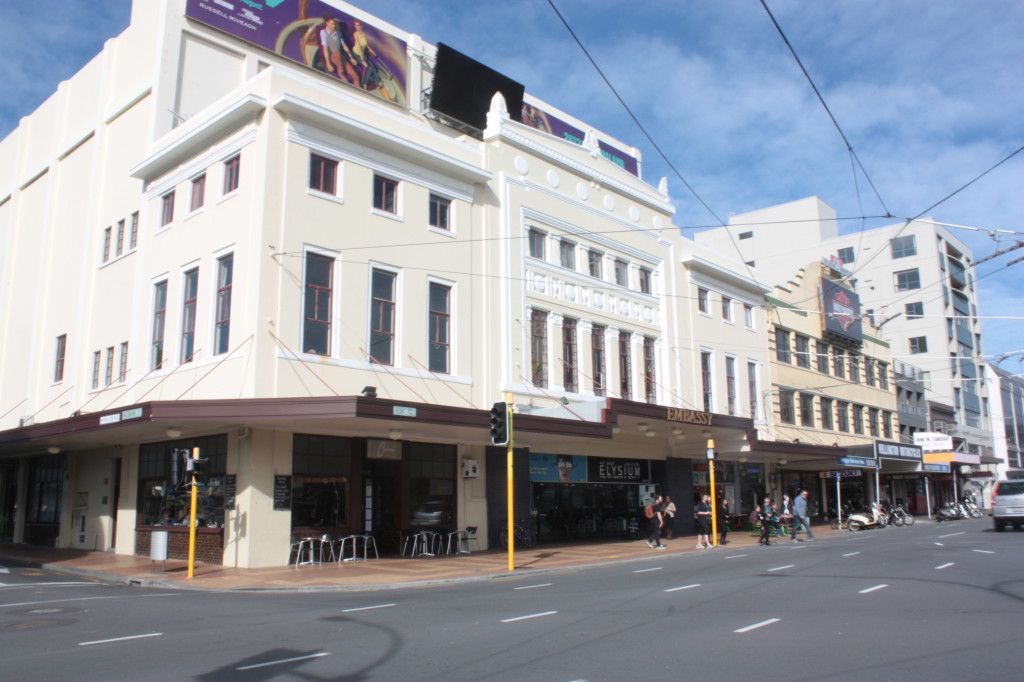 This is the Embassy, ie. the movie theater they premiered The Hobbit last year…!!! 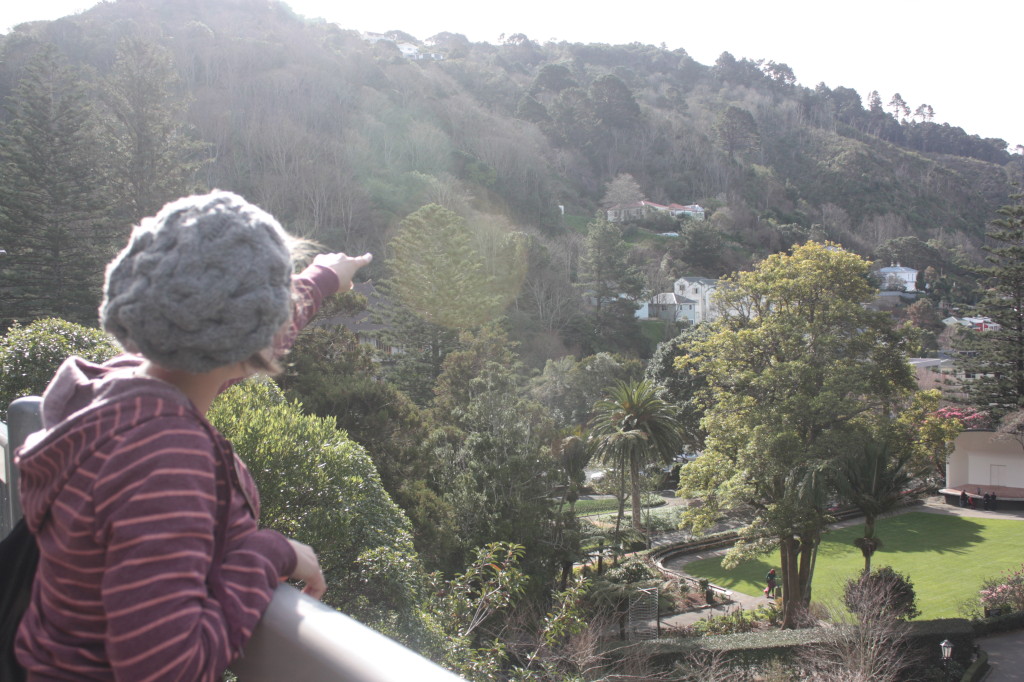 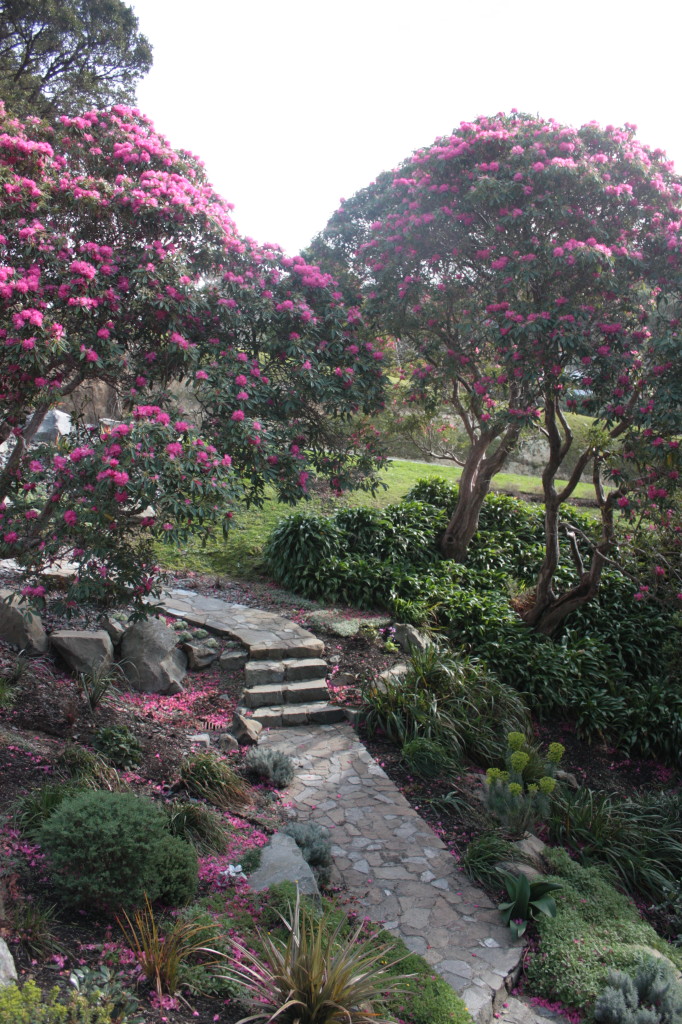 (I did feel my first earthquake though while I was in the shower. I know, I would, right?)

Anyway, we head down to Nelson in two days, but tomorrow we’re going on a Lord of the Rings filming location tour that we’re beyond excited for. Expect lots of pictures and geekery this upcoming Monday.

Heisenberg is stalking me.