Coming to New Zealand, I told myself not to get too wrapped up in the goings on of the addictive fiend that is the Interwebz. When I’m back in the States, chances are I’ll spend a third of my day scrolling through Tumblr, checking in on Facebook and Tough Pigs, and watching pointless videos on Youtube. Basically, I’m an expert at wasting a day. For the most part, I think I’ve done a fairly good job of not depending on Internet while I’ve been here. Oh sure, I check in with all the sites I frequent daily, but I feel I’m much better at going out and actually living for a change. The world wont end if I don’t scroll through my entire dash. Nothing’s going to implode if I don’t “like” a status. The world will keep spinning.

That being said, staying in WiFi-less locations has proved to be a bit of a challenge. Not impossible, but it does complicate things. The Internet is my one real way of contacting people back home. I start to get a bit homesick when I can’t email my dad or Viber Nick. I mean, it’s fair to say homesickness hasn’t been an issue for me at all so far – at all – I do miss people on occasion, and being without Internet tends to emphasize that.

Anyway, enough ranting. I’m now back in a place with WiFi and I can, at long last, update you all on what Kathleen and I have been up to as of late. 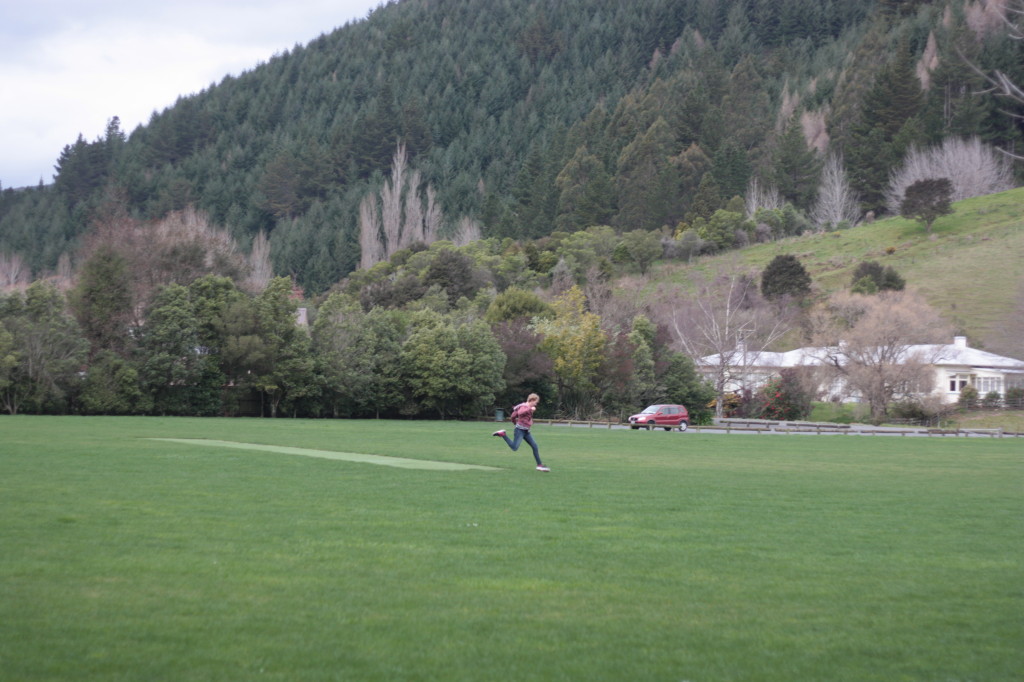 Let’s skip back to last week for a moment. I mentioned we were WWOOFing at a couple’s house in Nelson, but I didn’t speak too much of them.

The couple, Kirti and Sky, were absolutely wonderful people. They instantly made us feel right at home, offering us delicious food, comfortable accommodations, and wonderful conversations. They seemed genuinely interested in everything we liked and hoped to accomplish, and in turn they told us all about their fascinating lives. Kirti’s a funny, laid back guy who gave us a lot of insight on self-sufficient living and making sure your body is eating the right kinds of food. Sky is a gentle soul who loved introducing us to new things (music, art, etc.) and gabbing with us about anything and everything. I can’t emphasize enough how wonderful our stay with them was. Kathleen and I watched films with them, were introduced to musicians and poetry, and even learned how to play a new version of Rummy. We went into this WWOOFing gig thinking we’d stay for only three or four nights, and we ended up staying for the entire week. They were that lovely.

Plus they had a dog named Rusty who was the absolute sweetest. 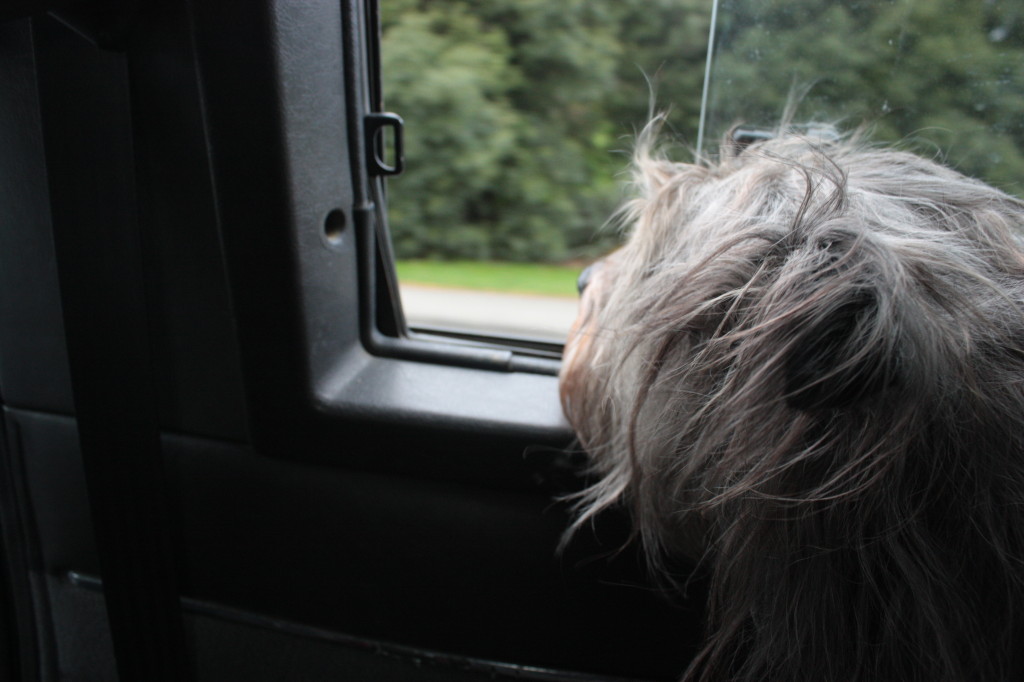 The WWOOF work was fairly easier than the previous two places we stayed. Essentially all we did was weed, and after heaving heavy logs, lawn mowing, raking and wheelbarrowing, and emptying out an entire garage, Kathleen and I were thankful for the change of pace.

When we weren’t WWOOFing, spending time with Kirti and Sky, or sitting in our room listening to Welcome to Night Vale, the two of us explored the outskirts of Nelson. 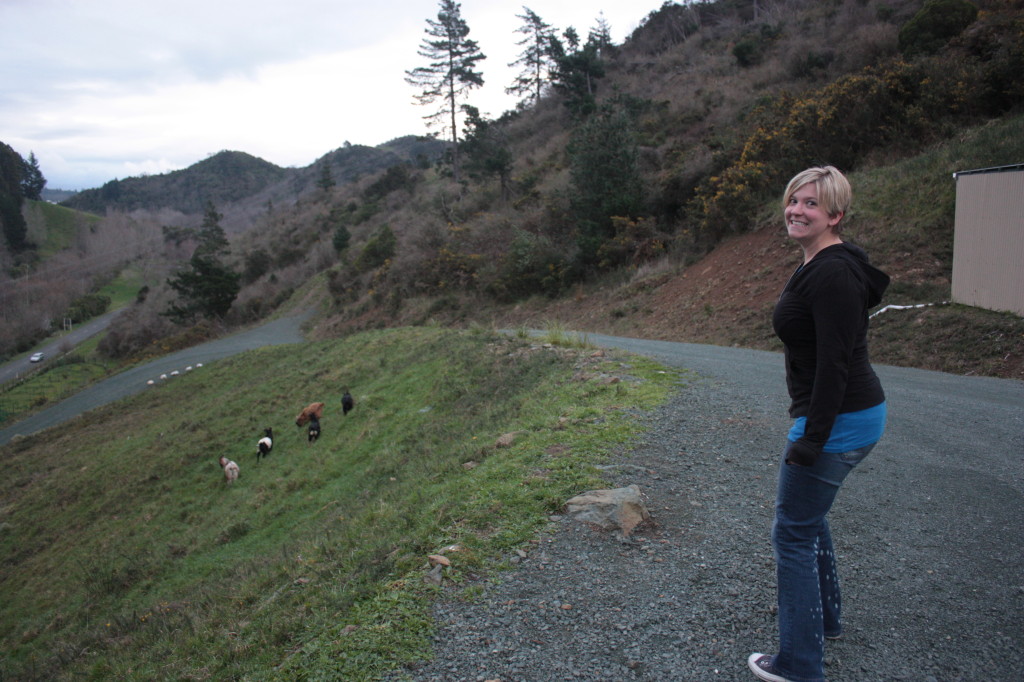 Kathleen’s excitement over the wild goats could not be contained. 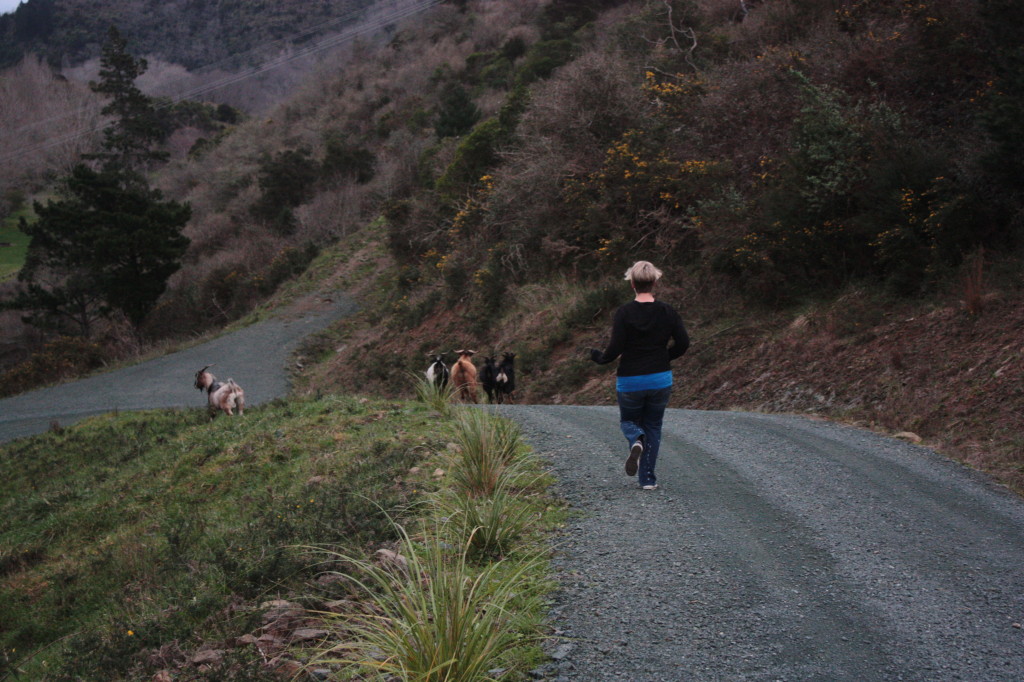 Fact: Goats don’t like it when you chase them. 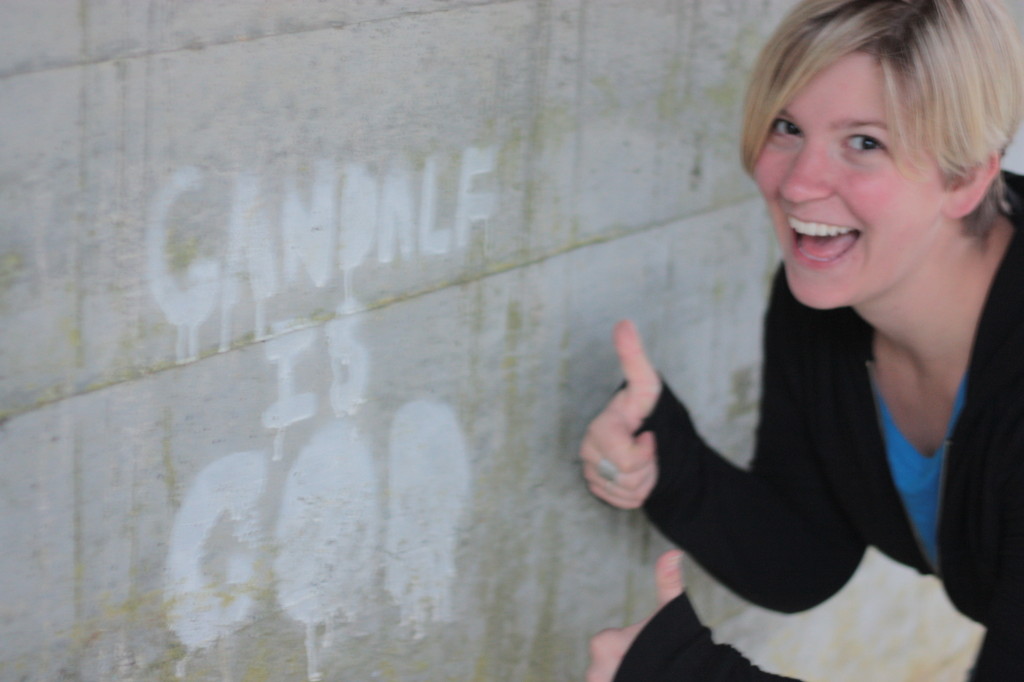 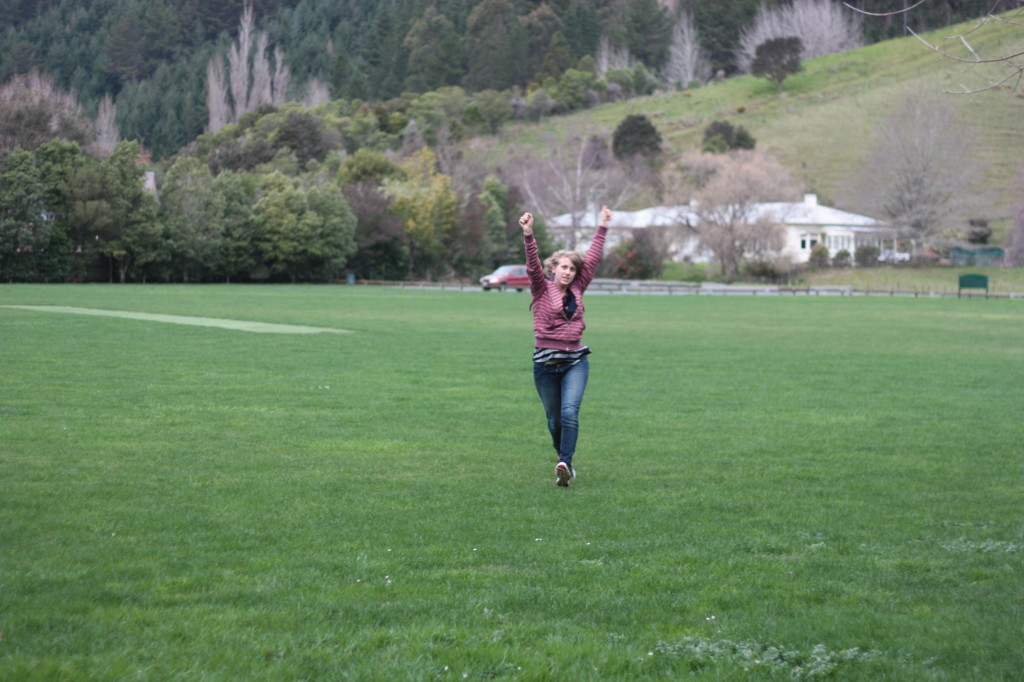 You can’t present me with a huge, beautiful, open field and not expect me to run through it. 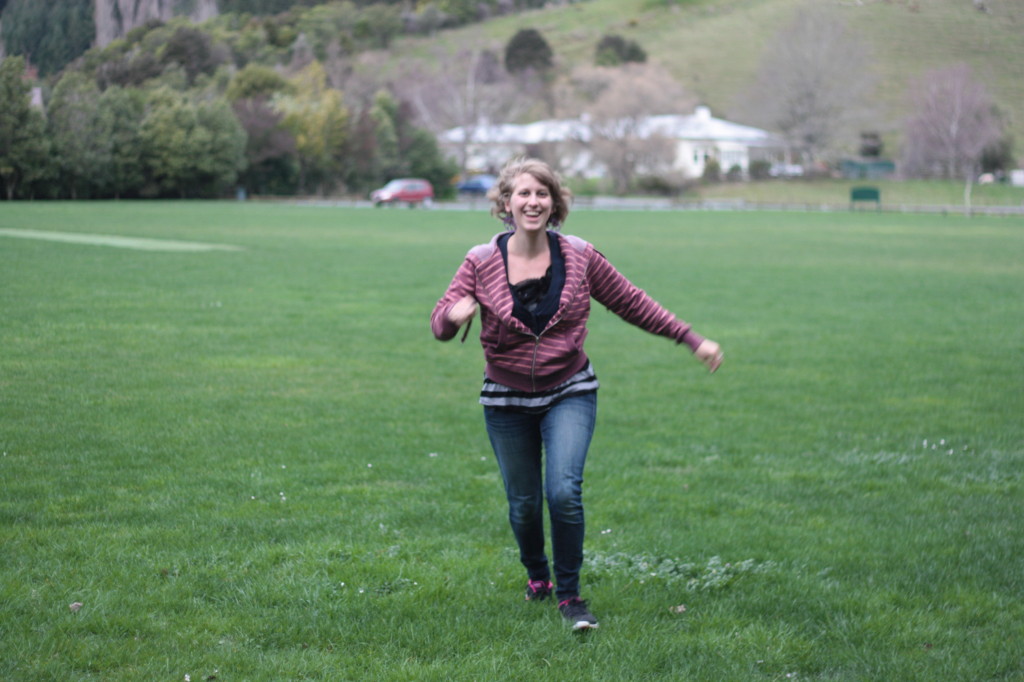 Kathleen and I tacked on a few extra hours of work to a couple of our WWOOFing days so we could take last Saturday off – which ended up being such a lovely day.

First we started off by wandering around Nelson’s Saturday Market. Think Portland’s Saturday Market, but much smaller. There were a lot of wonderful little stalls that sold food, clothing, jewelry, accessories, etc. We were mainly tempted by the food stalls, but somehow managed to resist. 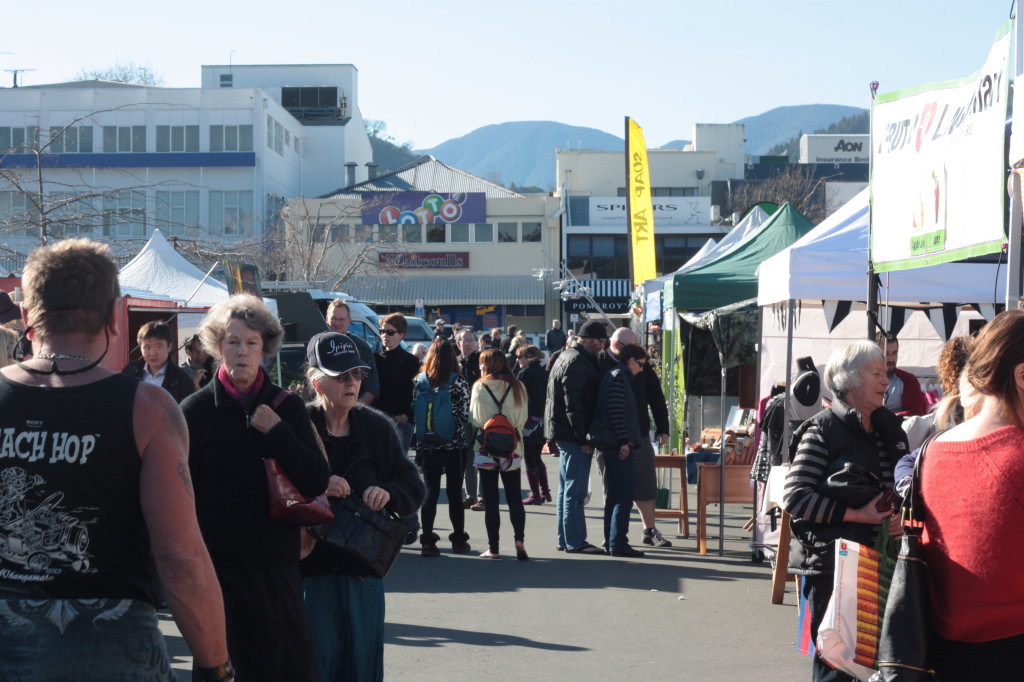 We also visited the jewelry shop that made the One Ring for the Lord of the Rings films. 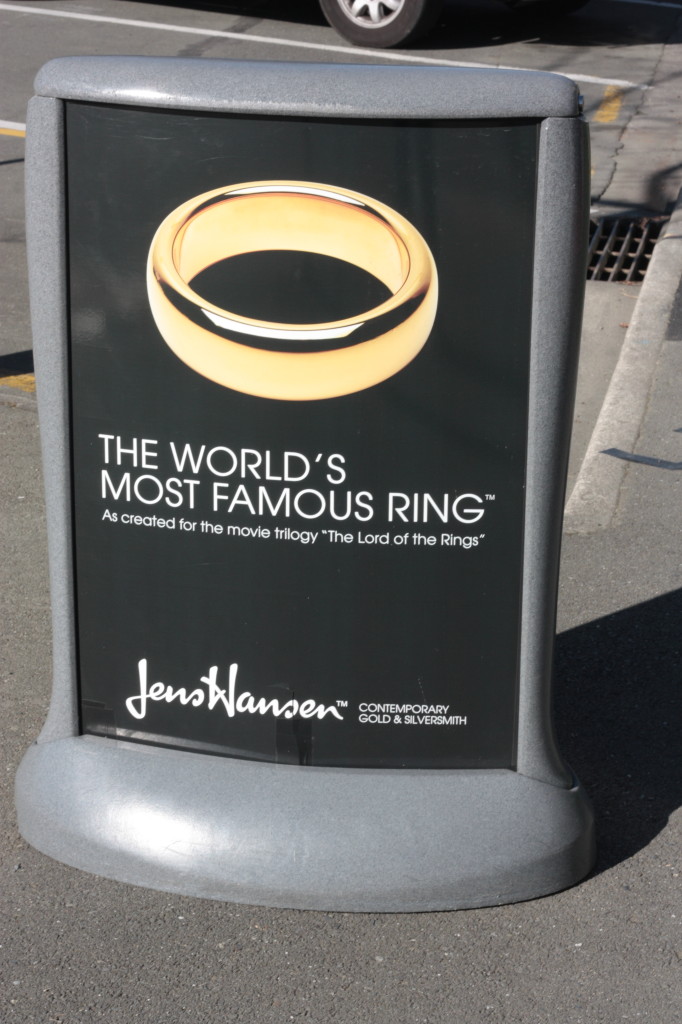 Then, after a hearty lunch, it was off to the World of Wearable Art (Wow) Museum. No pictures were allowed inside, but man, what a fascinating place. The museum showcases artwork designed in the form of clothing, all of which have been modeled in shows and up on stages.

They were all insanely innovative and astounding. Check out the web-site if you don’t believe me. 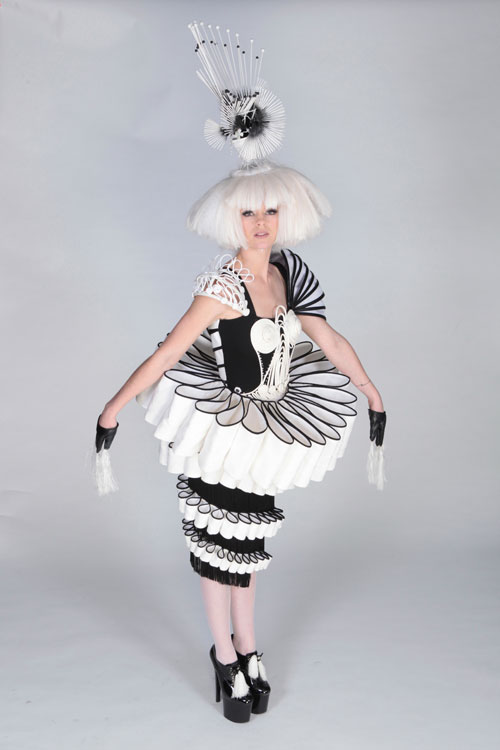 There was also a car show in the WOW museum that was pretty nifty. I’m not much of a car person, but I can recognize a stellar automobile when I see one. 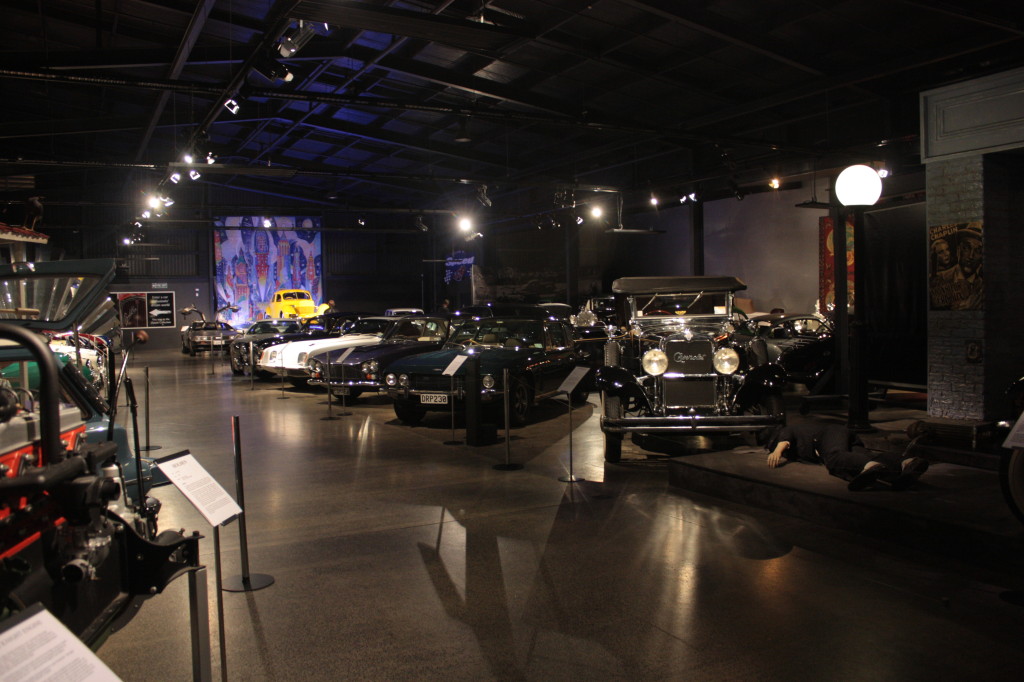 Finally, we did a hike up to the Center of New Zealand. It wasn’t a long trek, and the top had such amazing views. A perfect end to our day. 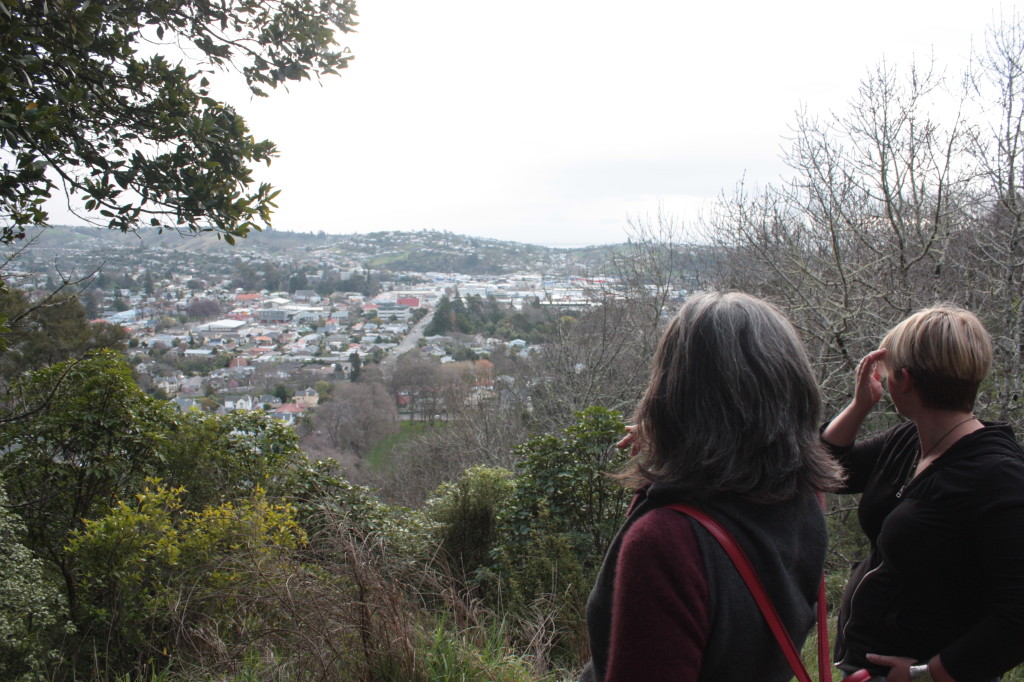 My only picture of Sky and it’s the back of her head. 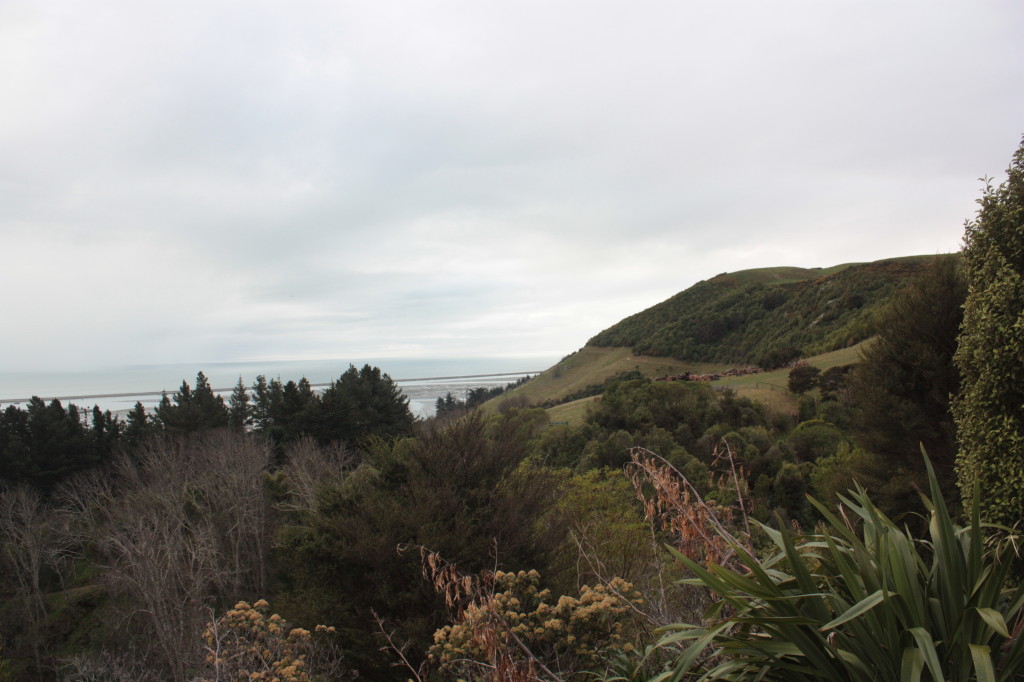 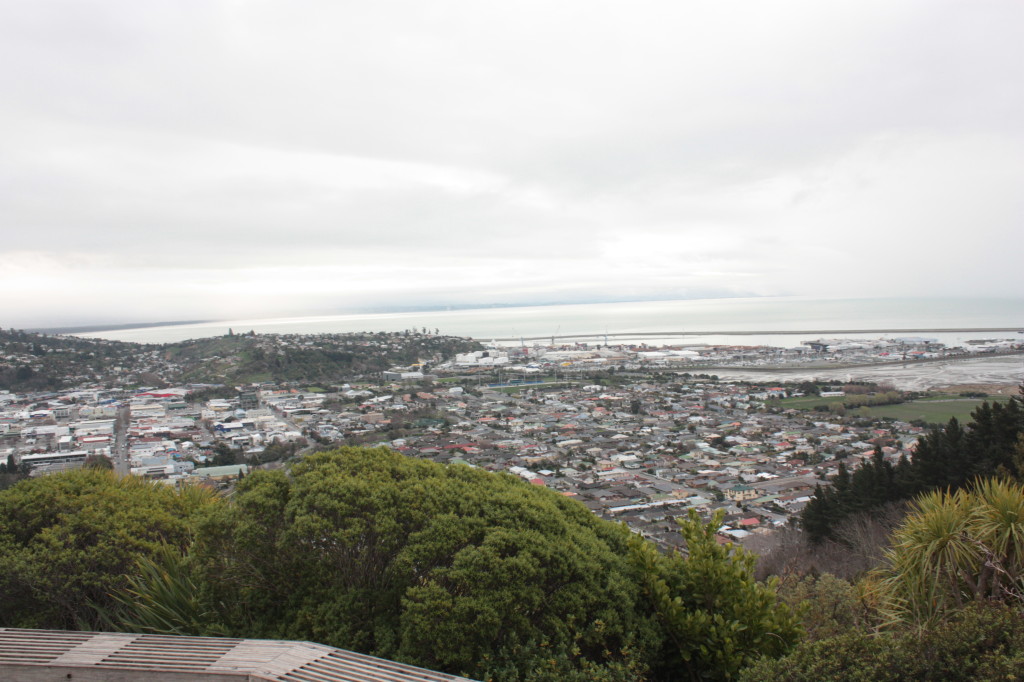 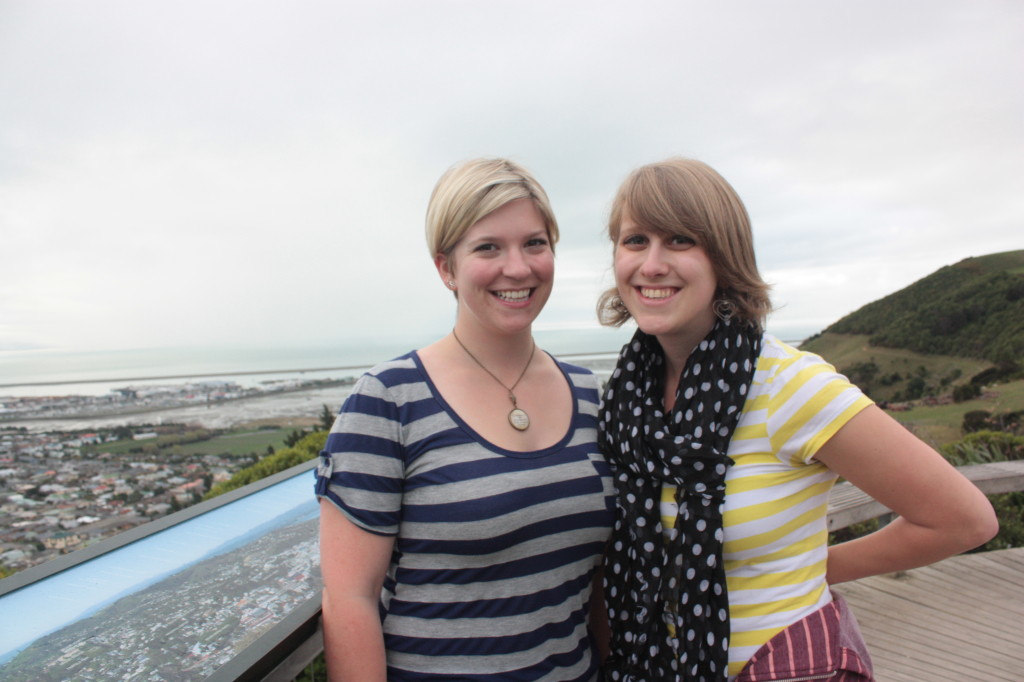 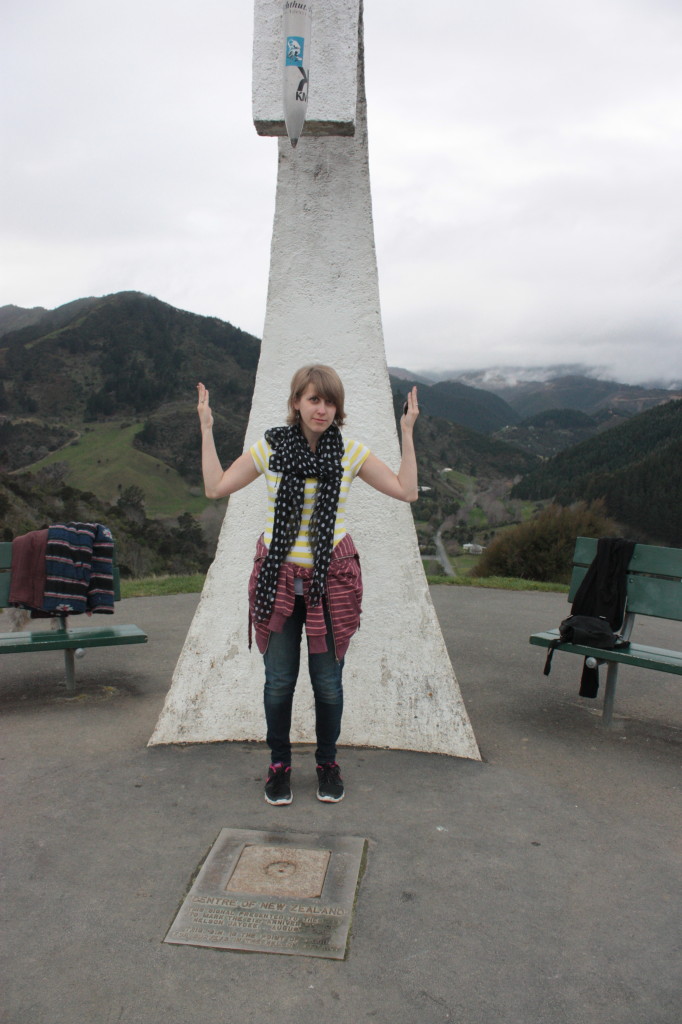 And the World’s Best Clashing Outfit goes to… 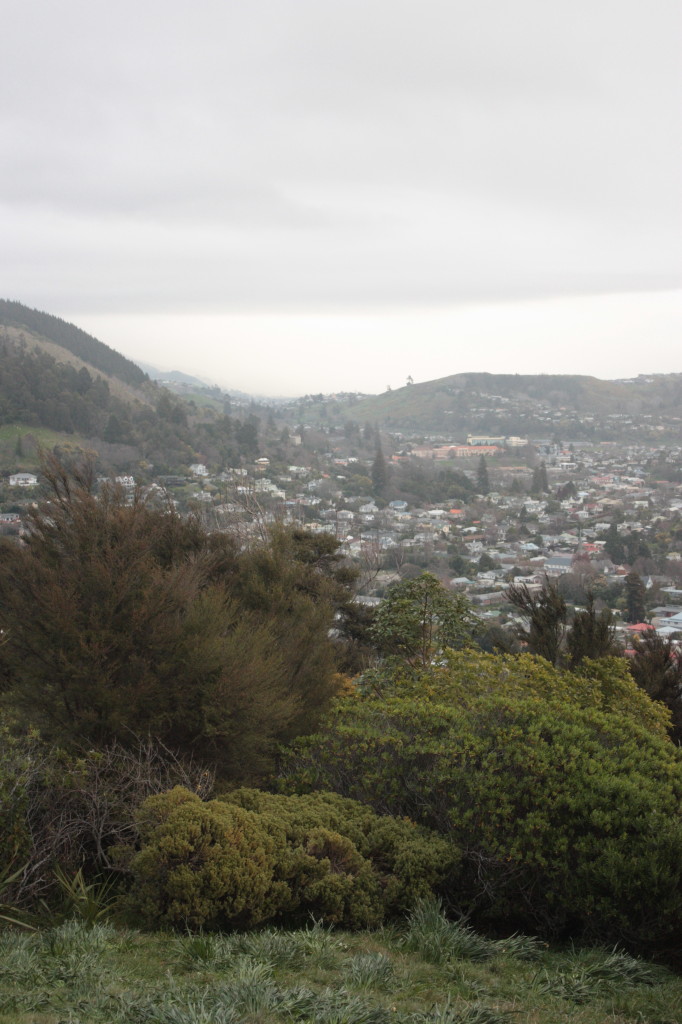 Come a week after our arrival, it was time to say good bye to Kirti and Sky (and Rusty). Reluctantly, we hopped on our next bus and headed down to Christchurch.

Now we hadn’t heard word of any places between Nelson and Christchurch worth stopping in, so we thought going straight there was the best option. As the bus is driving along, Kathleen and I get a glance out the window, and holy hell, it is beautiful. There are snow-covered, gorgeous mountains to our right, and a clear, rich ocean to our left. We literally did not know where to look because it was all too beautiful to take in. Not to mention we saw hundreds of seals lazing around on rocks as we drove by…!!

The bus stopped in a small town called Kokorua for our half hour lunch break. Town-wise? Kokorua doesn’t have much going for it. But damn if it isn’t the most gorgeous place we’ve seen this entire trip. 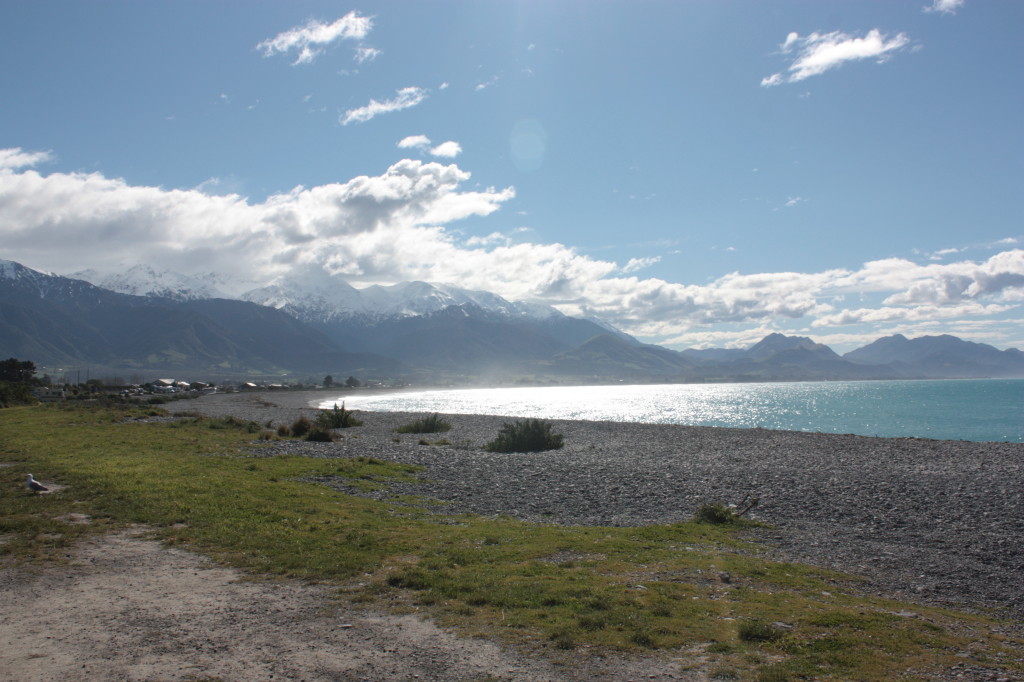 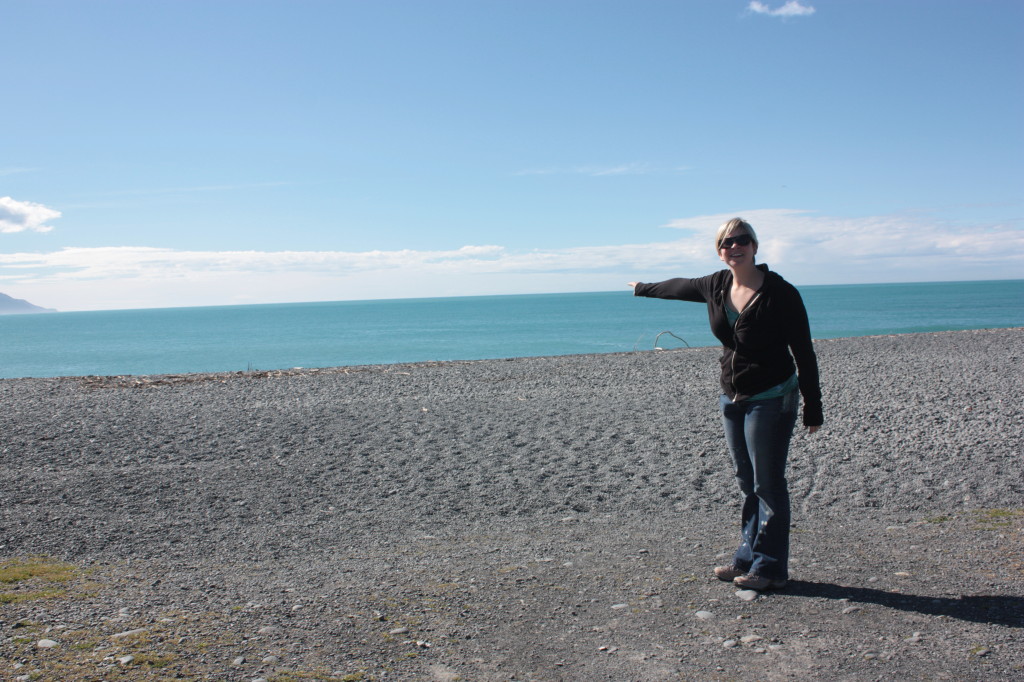 “HOW IS THIS PLACE REAL??” should be the town’s catchphrase. 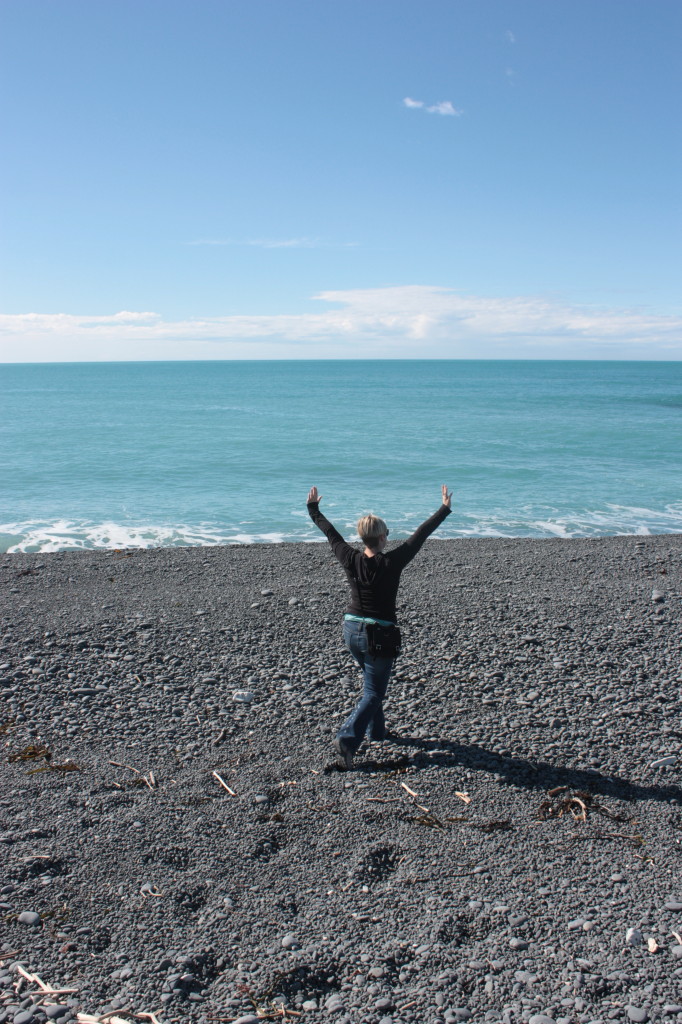 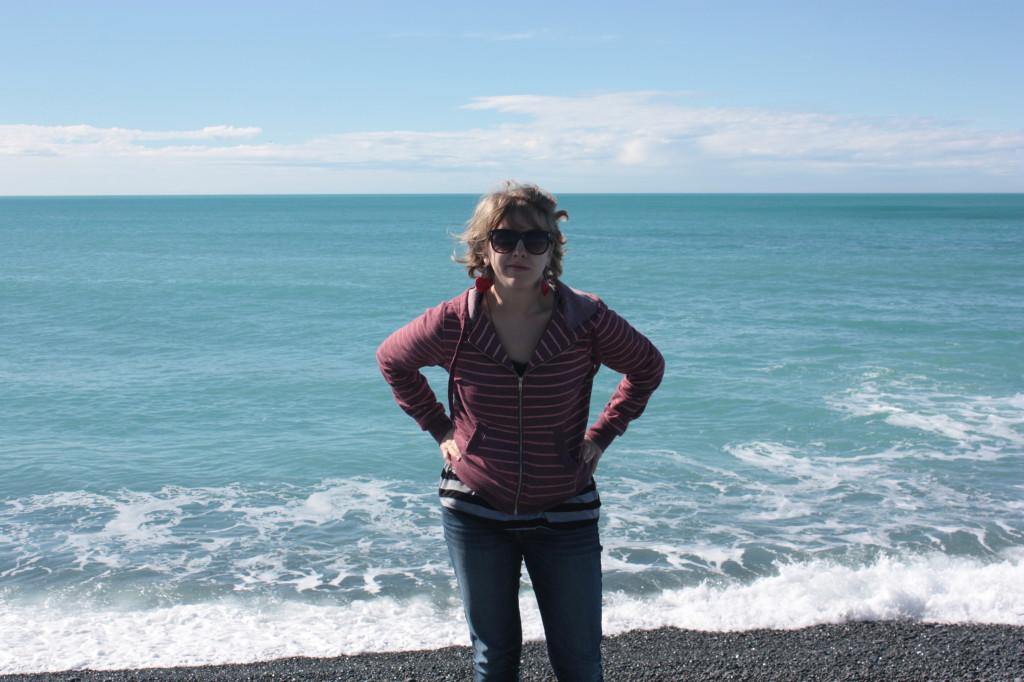 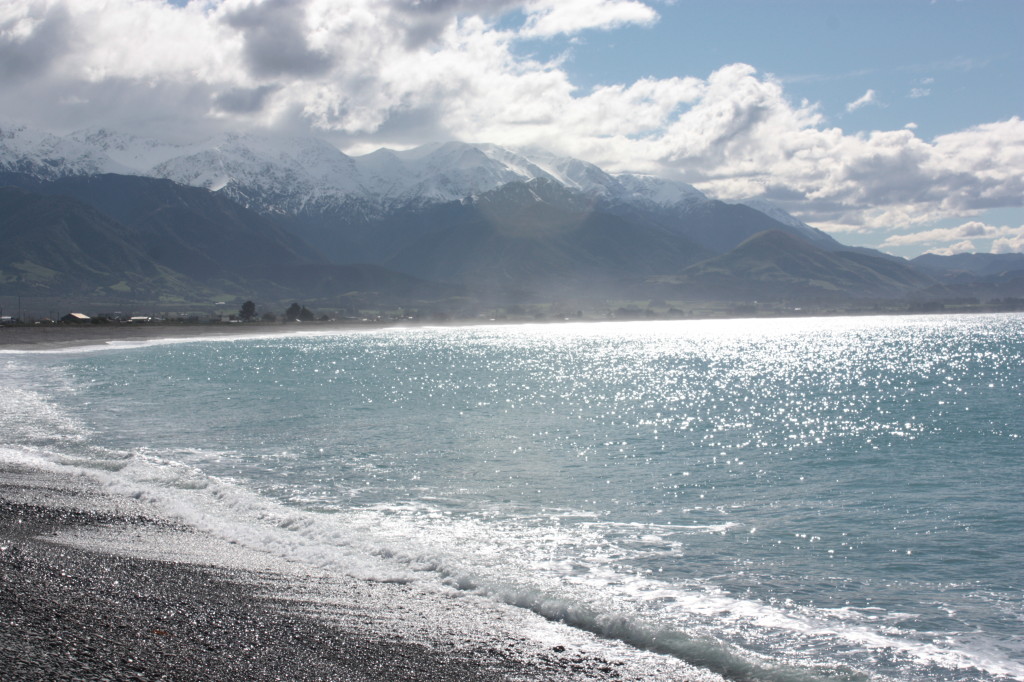 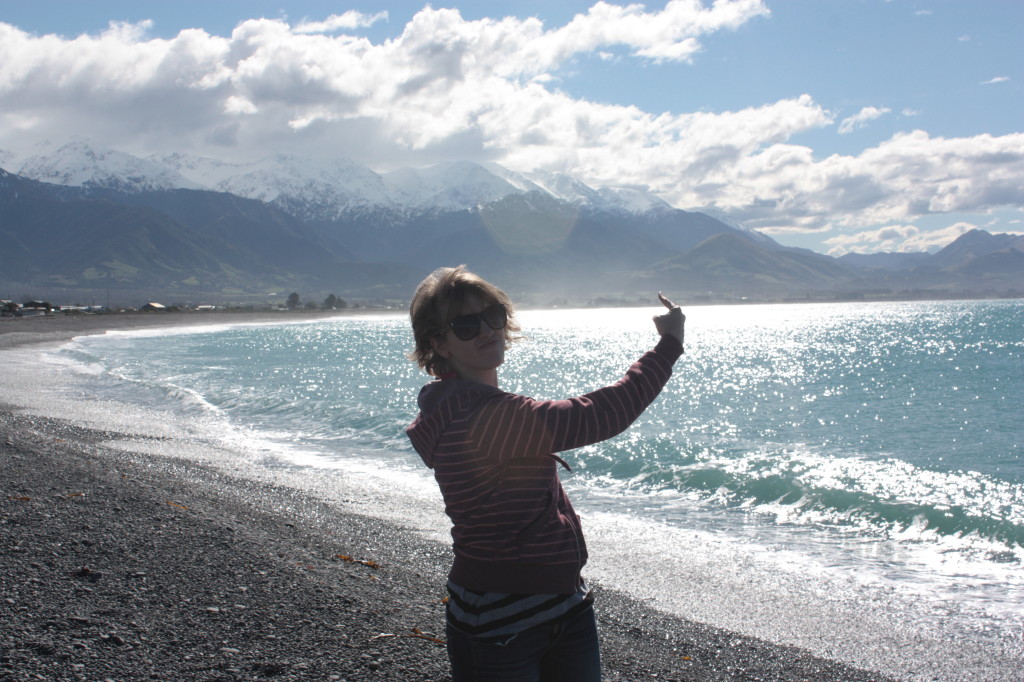 In Christchurch we met up with my bud James to stay at his place. I met James almost a year and a half ago through the magic of Muppets. He liked the article I wrote on Steve Whitmire’s hair for Tough Pigs – which was the first thing I ever wrote for them – and we struck up a friendship after that through Facebook. Coming to New Zealand he was one of three people I knew, and when he offered to let us crash at his place, well, we couldn’t say no.

It was a lot of fun staying with not only James, but his four awesome kids as well. We got to spend a lot of time with all of them while we were there, and I was reminded of how much I like being around kids. They’re unabashedly silly and love sharing their interests with you. I didn’t take any pictures of them, but here’s one I snagged from James’s Facebook of them with my someday-future-best-friend Jed Brophy.

We spent a lot of our time watching awesome movies with James and the kids (Prince of Egypt, Tintin, Muppet Treasure Island, etc.), and I finally got to watch more Flight of the Conchords. James also got us into a showing of Elysium, which was better than I expected.

Plus James is a fellow Muppet fanatic. In case you’re not aware, there are two spots in the Nicest People On Earth category:

Seeing as James falls into both categories, he’s an exceptionally rad guy. He had plenty of Muppet memorabilia for me to drool over, we listened to Muppet music almost every night, and I could make Muppet references and people actually understood them. Not to mention one of his kids told me, “I like your Muppet tattoo,” which marks the first time ever that someone acknowledged my tattoo was a reference to The Great Muppet Caper without me having to tell them. I was extremely pleased.

Oh. Did I mention James had a giant cardboard cut out of a shirtless Hugh Jackman?

Because that was definitely a thing. 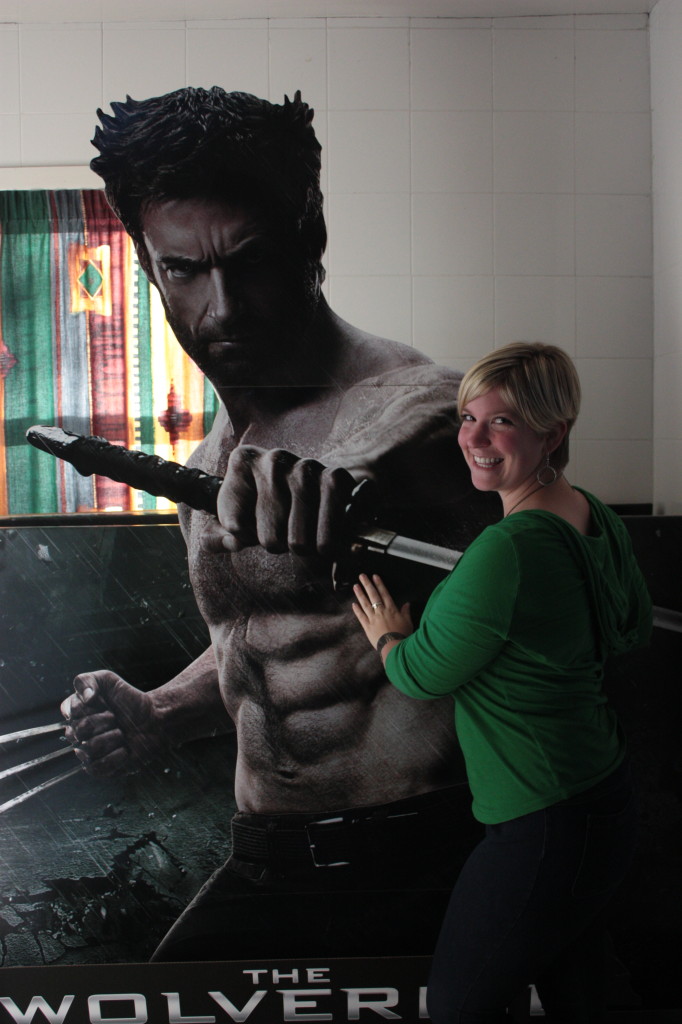 Also while in Christchurch, Kathleen and I had the pleasure of meeting Christopher, a friend of a friend of mine. He invited us over to his house, which involved a long bus trek that we, surprisingly, didn’t get lost during. Chistopher has a lovely home that, unfortunately, has seen its fair share of damage due to the earthquakes that hit Christchurch a couple years back. He also has two beautiful cats: Mister and Madame Brown.

On our first day together, Christopher drove us around and showed us Christchurch and a lot of the surrounding sub-cities. While he did show us some buildings, such as Christ College and the hospital, most of our tour involved viewing the leftover wreckage from the Christchurch quakes. It was a harrowing experience; one that can only be compared to my time spent in New Orleans after Hurricane Katrina. Seeing the leftover rubble, the shattered buildings, and the empty lots, it broke my heart. I can’t even fathom what it’d be like if something akin to the Christchurch tragedy happened to Portland, or perhaps I can but just don’t wish to imagine it.

Even though it was an emotionally draining day, we saw a lot of construction going on as well, so it’s good to know the city is on its way to getting back on its feet. Plus Christopher showed us some absolutely beautiful spots in Christchurch. 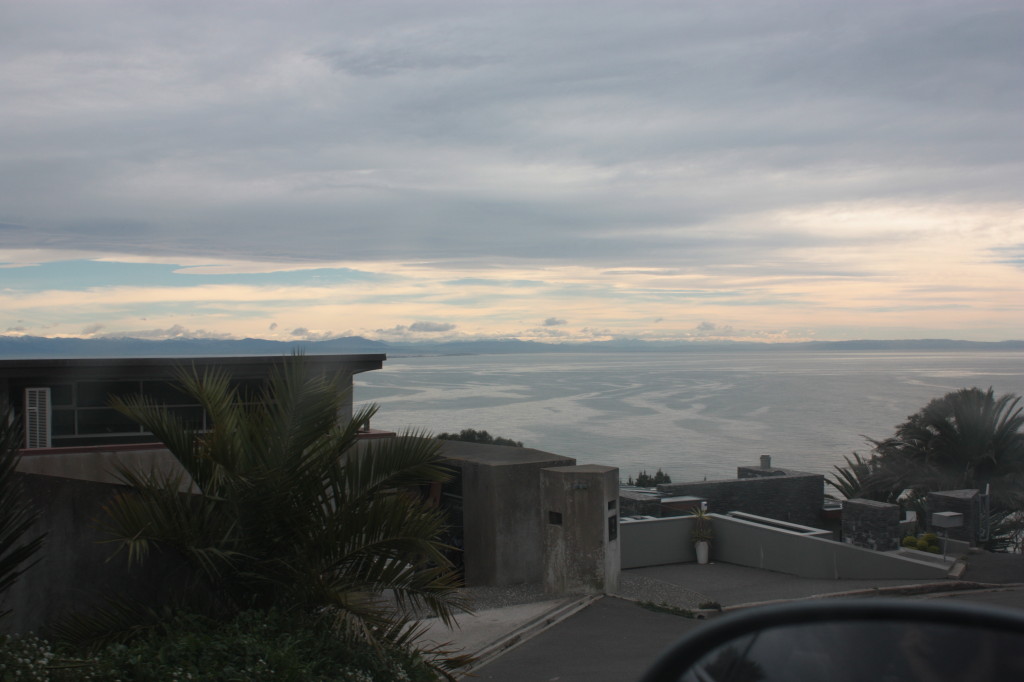 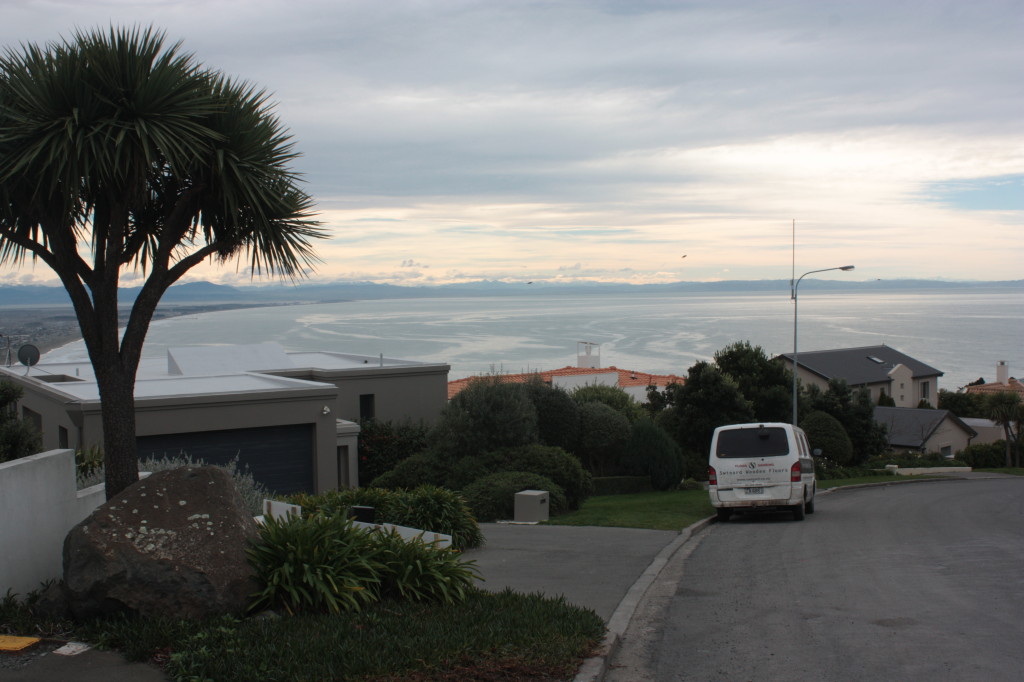 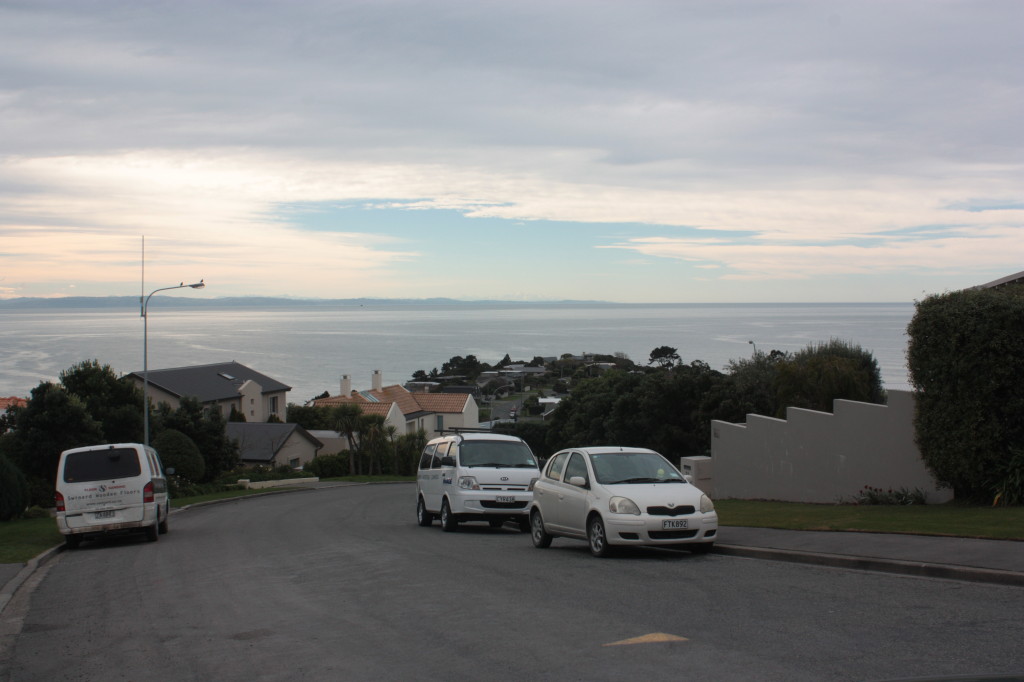 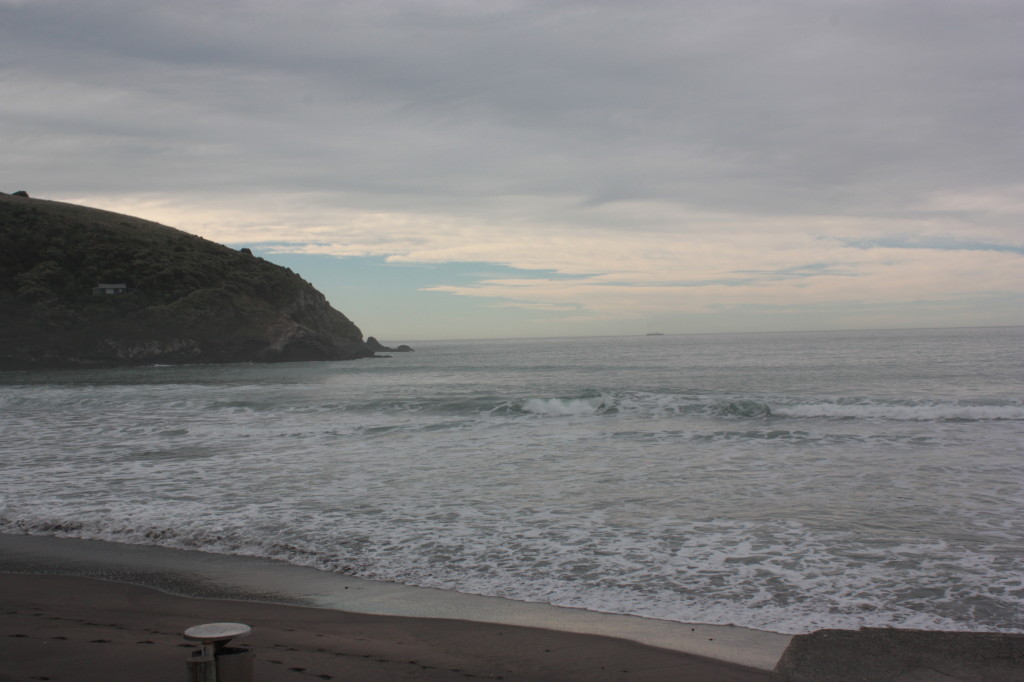 We enjoyed spending time with Christopher so much that the next day we went back over to his house for lunch and Life of Pi. Good food, good film, and good company; the perfect way to spend a day.

And now we’re in Oamaru. The bus ride here consisted of me thinking I could read the last third of The Fault in Our Stars in public and not make a mockery of myself, only to then prove myself horribly wrong. (I’m fairly certain that everyone across the aisle saw me crying. But only fairly.)

On Monday I’ll tell you guys all about penguins, steampunk, and Carol. Oh man. Get excited for learning about Carol.

We found love in a Kiwi place.