Yesterday marked Kathleen and my six week anniversary in New Zealand. It seems like only yesterday I was sitting in my TV room back in Portland, trying to figure out what the hell I wanted to do with myself after graduation, only to have it dawn on me that there was a place I always wanted to travel. Kathleen has just under a month left, but I’ve still got about ten a half months to go. I’ve started to formulate a plan of attack for when I’m on my own here, but it’s still very early in the planning process. I’m thinking about trying to find a more long term WWOOFing stint up in either Paihia or the Bay of Islands, then hopefully finding work and a shared flat somewhere in Wellington. Again, it’s still early on and plans could always change, so fingers crossed that it’ll work out.

But enough about that! Time to talk about the awesome time we had in Oamaru and why Dunedin is (thus far) my least favorite place we’ve visited. 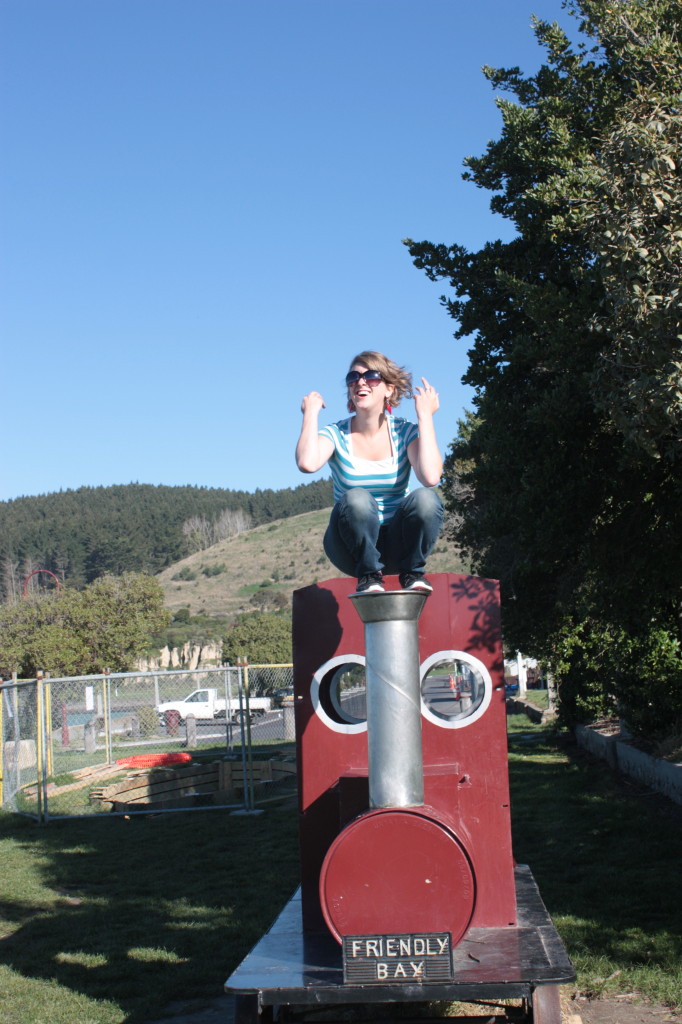 So we arrived in Oamaru last Friday, and what was the first thing we did upon arrival? Get lost.

Well, okay, fine, we weren’t really lost. We were walking the wrong way down a street and we would have surely put two-and-two together soon enough, but we certainly looked lost. Suddenly a car pulls over in front of us. The window rolls down and inside we see a tiny old lady. “Where are you trying to get to?” We tell her the YHA, then she shakes her head and says, “You’re going the wrong way. I’ll drive you there.”

After years of being told “don’t get into cars with strangers”, Kathleen and I did it anyway. I mean, she was a tiny, sweet old lady. So unless she had discovered the best cover for her serial killing shenanigans, we weren’t really worried. We learned that her name was Carol and that she was an Oamaru native. She told us that we had to see the limestone quarry while we were there, and then, upon dropping us off at our hostel, suggested driving us to the quarry the next day. Now I’ve never thought of a rock quarry as somewhere interesting to visit, but we were eager to spend more time with Carol and readily agreed. So we exchanged numbers and went our separate ways.

There was already a girl sleeping in our hostel room when we got there, so we decided to wander around the town for a bit. To be honest, neither of us were really taken with Oamaru right away. It didn’t seem very interesting, and there didn’t appear to be very much to do. Considering that the local hang out for the Oamaru teenagers was the KFC, we were glad we only decided to stay for two nights.

When we got back to the hostel we discovered there was a slice of cake sitting on my bed. After asking the now awake roommate if it was hers – it wasn’t – we decided to go ahead and eat the mysterious cake. Sure, it could’ve been poisoned or roofied… but… I mean… It was cake. It’s impossible to say no to cake. At least it would’ve been a delicious death.

We then hung out in the lounge with two French people, who gave us lots of tips of where we should/shouldn’t visit on the south island. Then we all watched The Bachelorette and made fun of the contestants. Good times.

Skip to the next morning, Carol comes to pick us up from out front of the hostel. Unfortunately the limestone quarry was closed that day, but she then suggested just showing us around Oamaru instead. So she took us to a beautiful garden and some fantastic look out points. We also learned the cake was from her, making her my favorit3e person on the entire planet. 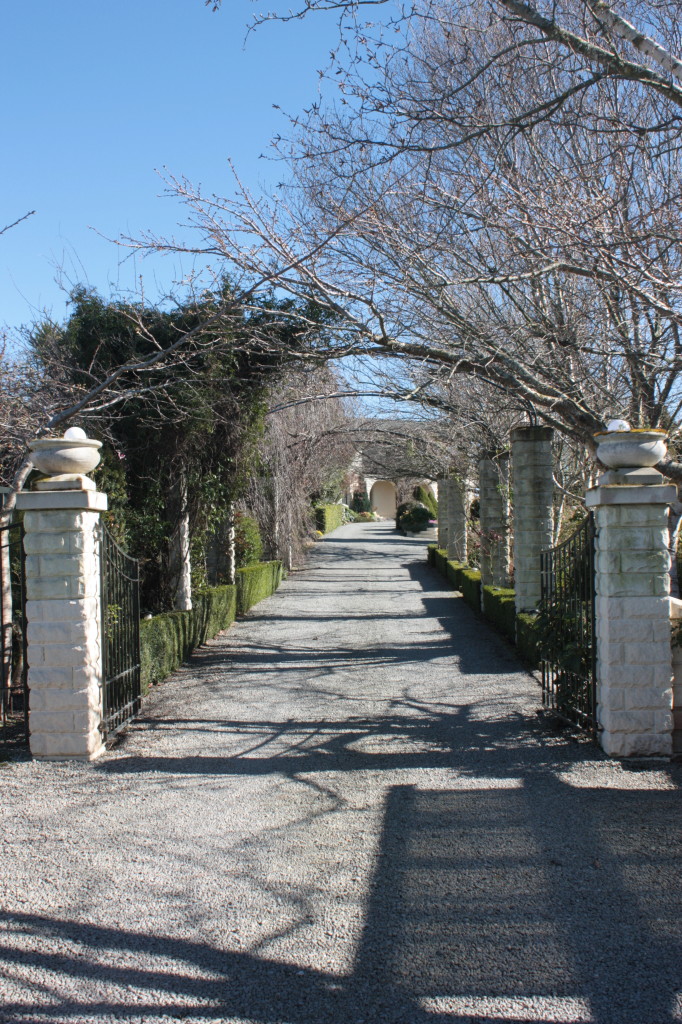 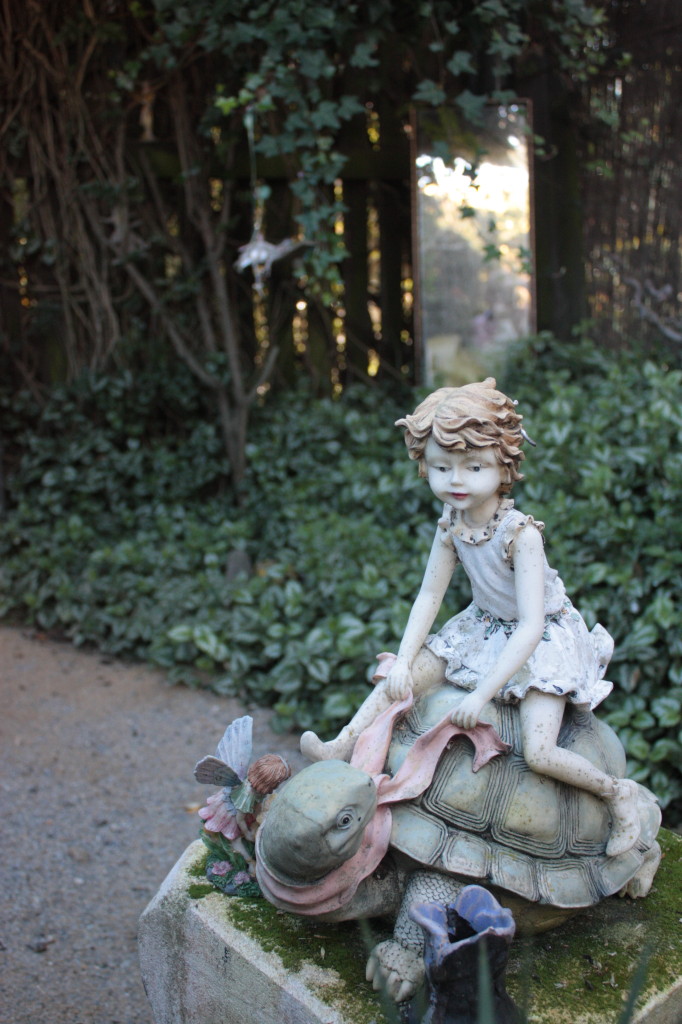 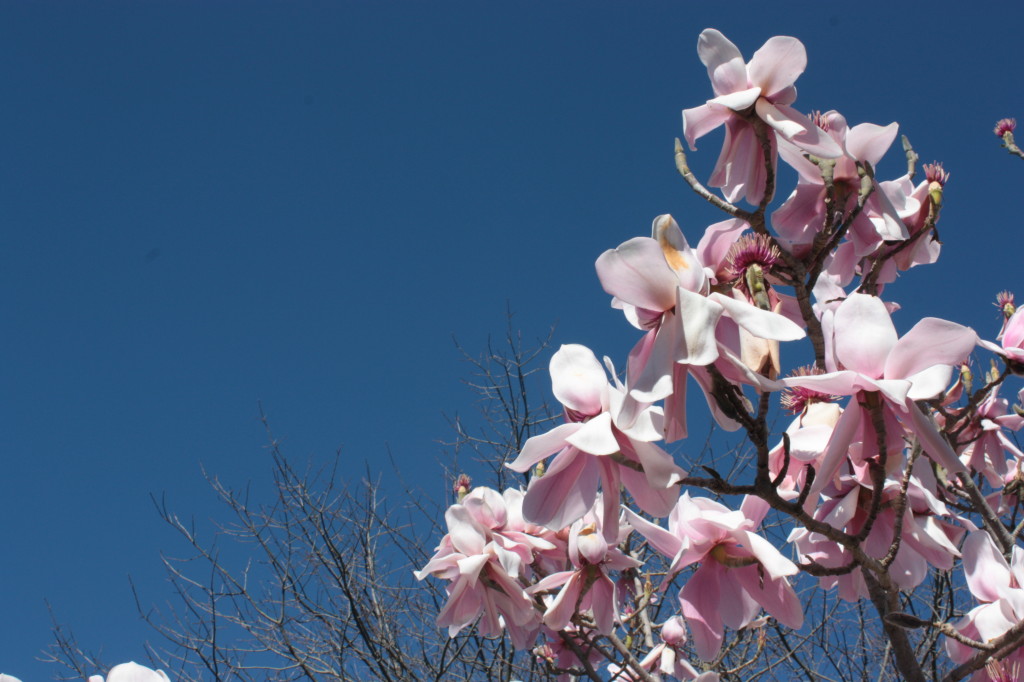 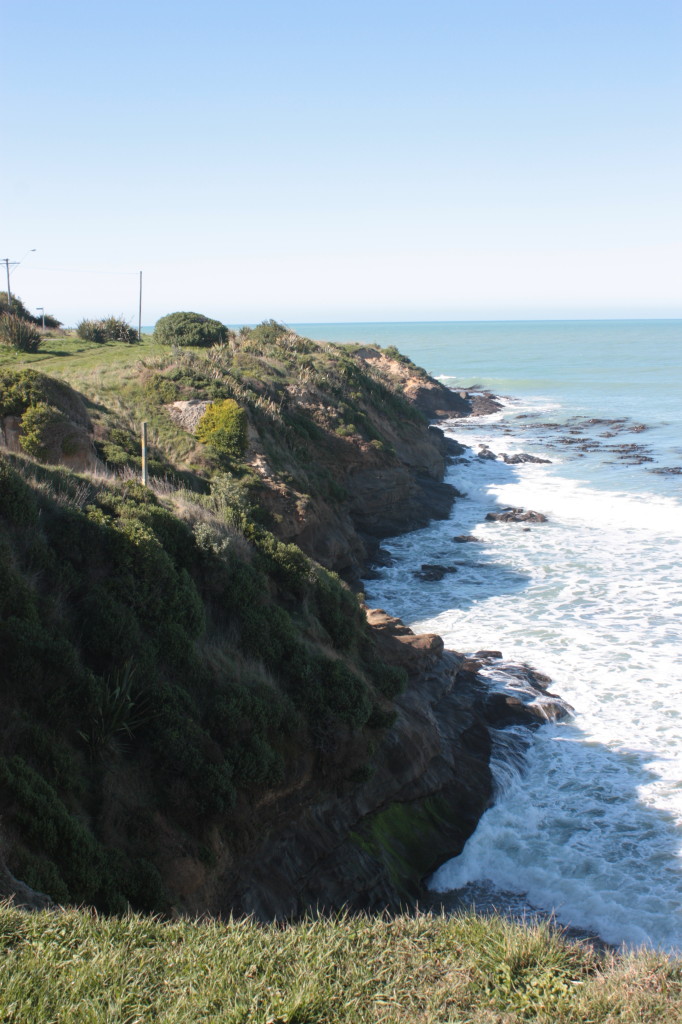 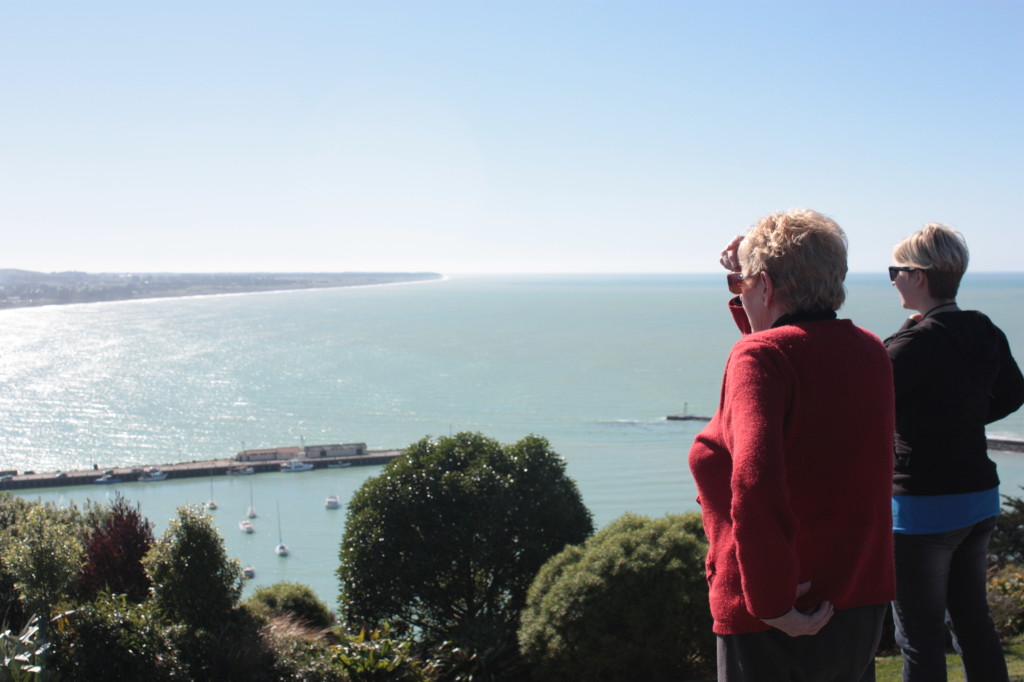 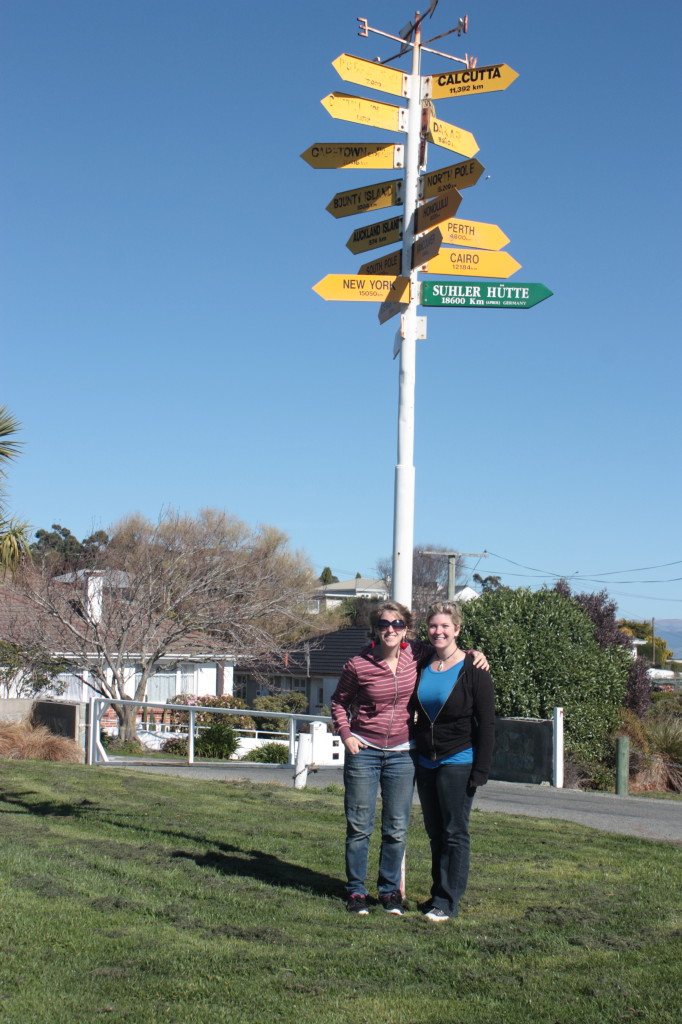 The rest of our day in Oamaru was fairly laid back. We discovered a cool art gallery and poked around that for a while. We also stumbled across a bad ass playground right next to the beach. We basically transformed from twenty-three year old women into five year old girls. 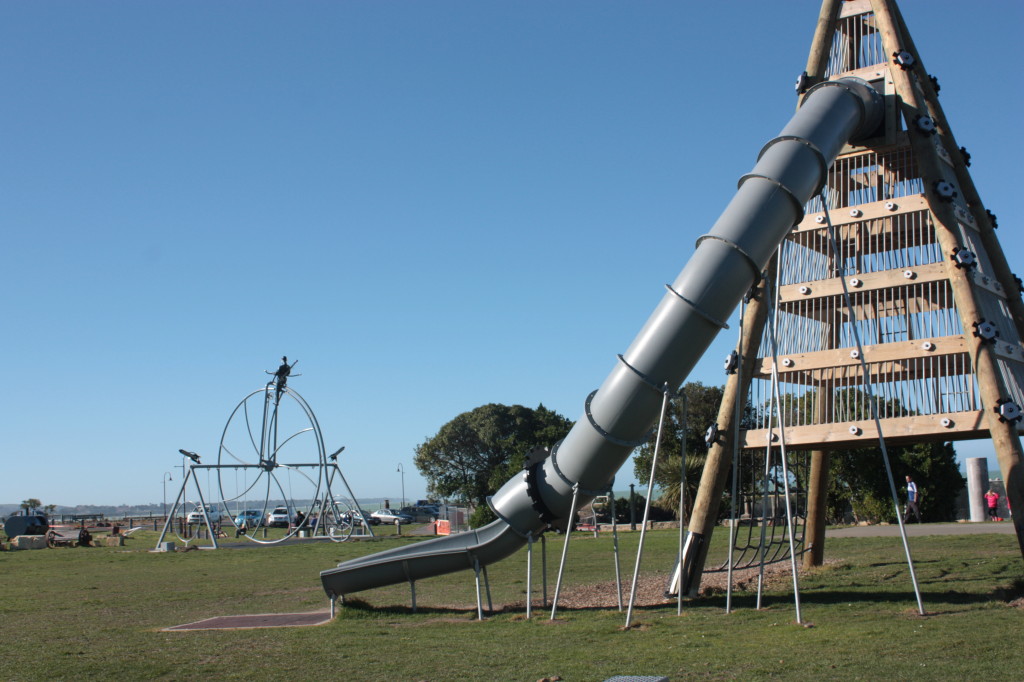 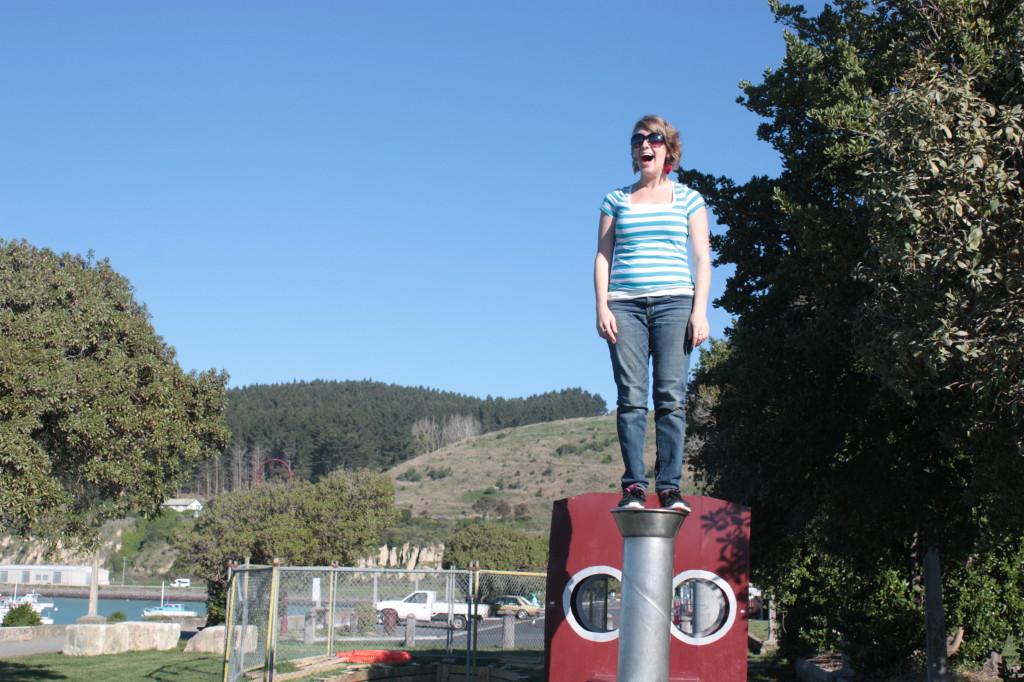 I have no idea what I’m doing here. 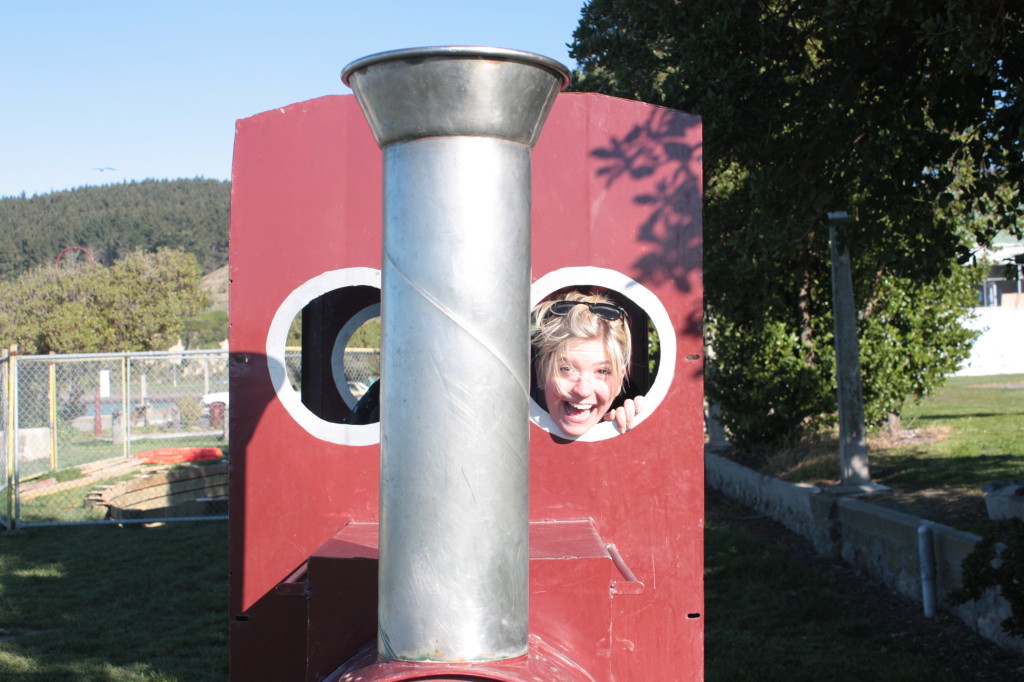 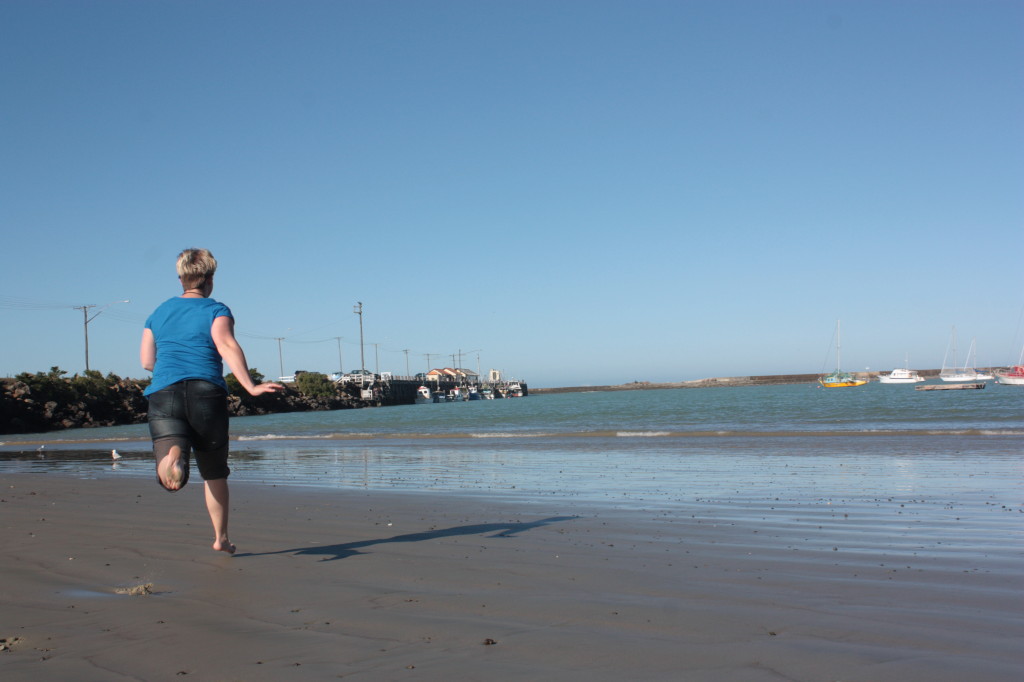 That night we went back out to the beach for some penguin sightings. We did see a couple far off in the distance, but weren’t able to get close enough for pictures. We also stumbled upon one inside of a hole in a brick wall, and it was the cutest little thing I’ve ever seen.

Oh, and I finally watched A Very Potter Senior Year. At long last!

The next day we had to transfer to a different Oamaru hostel, due to the fact that both Dunedin and Oamaru YHA hostels were all booked up that night. We ended up at the Empire, which was a pleasant place. The owner of the Empire invited us to her birthday barbeque that afternoon, where we met a lot of nice people and got to talk about our time in New Zealand. Plus free food.

Most of the morning we explored a little area of town that Carol told us about, as well as the Sunday market. 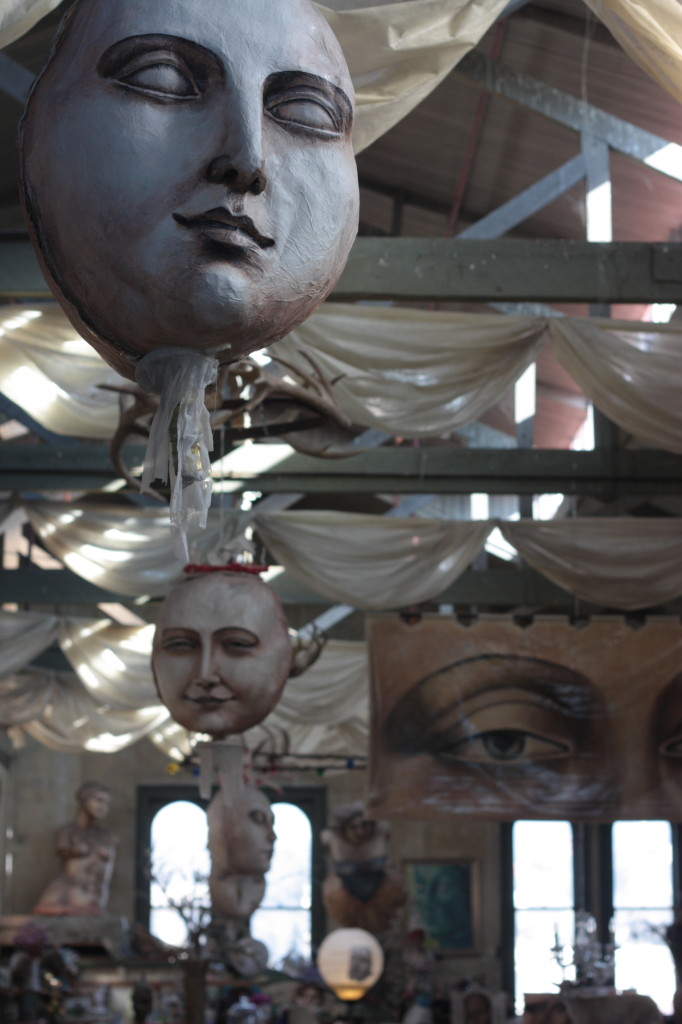 Another awesome art gallery we found. 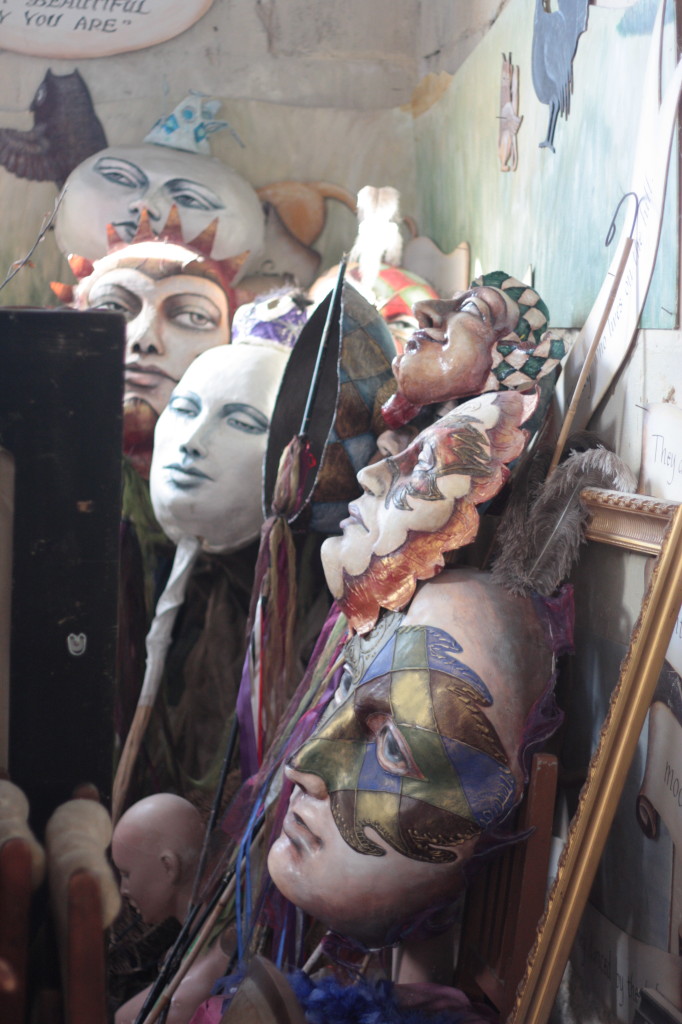 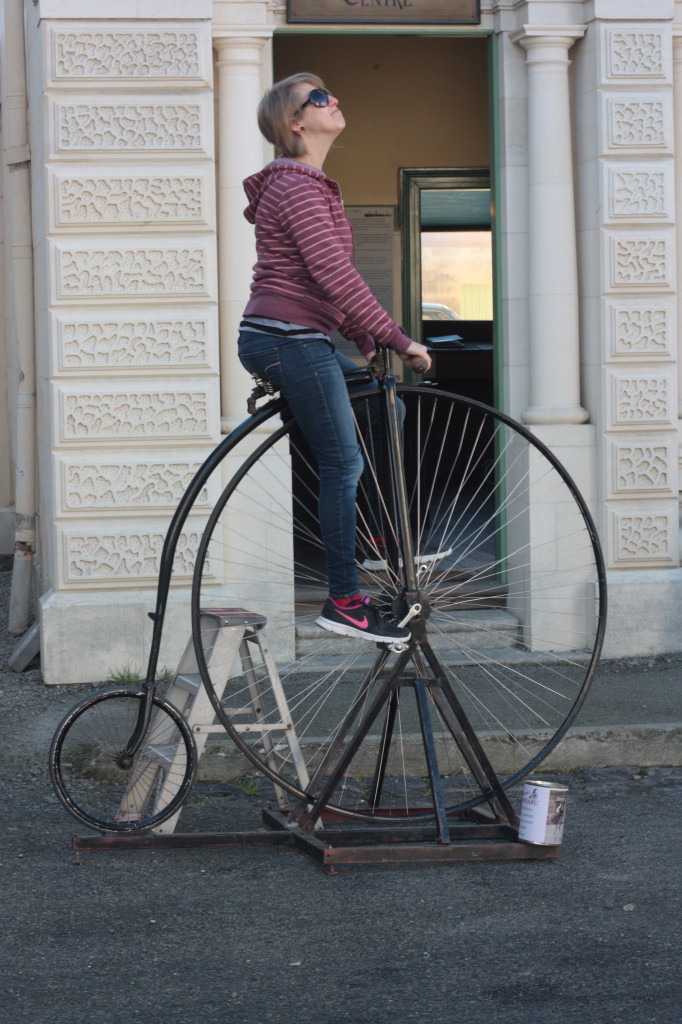 Can’t get much better than this.

In the afternoon we visited the Steampunk muesum that Oamaru is well known for. It was very different than what I was expecting, but it was still rather cool. When I think Steampunk I usually think goggles, vests, top hats, and pocket watches, but the museum was more like a horror house meets trains meets science fiction. Plus we got in for half price since the guy working there, Rapo, took a real shine to us. 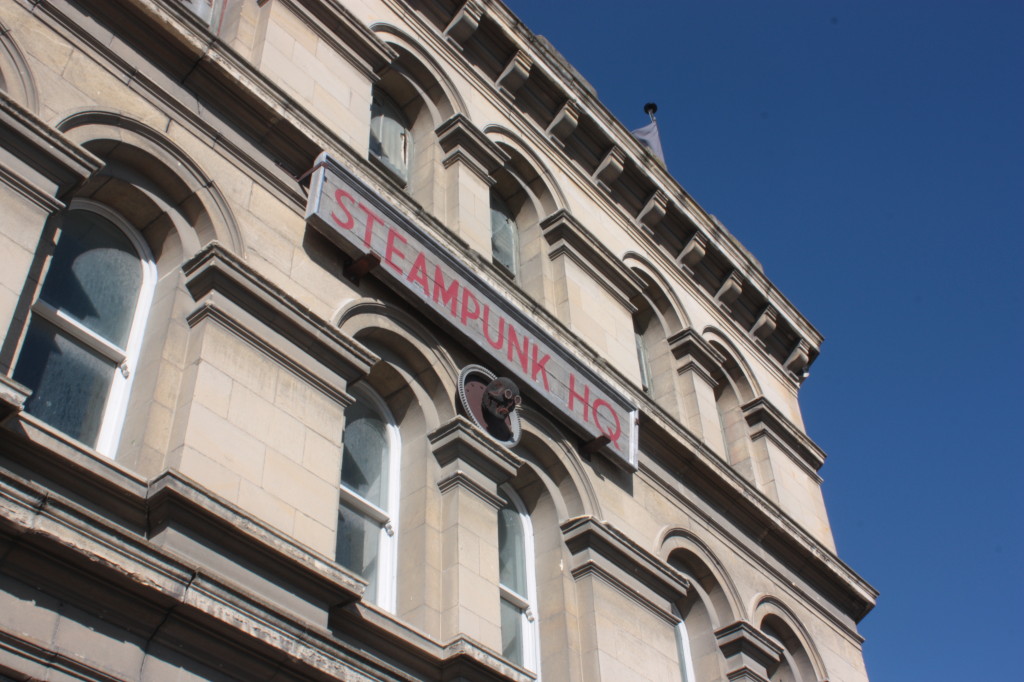 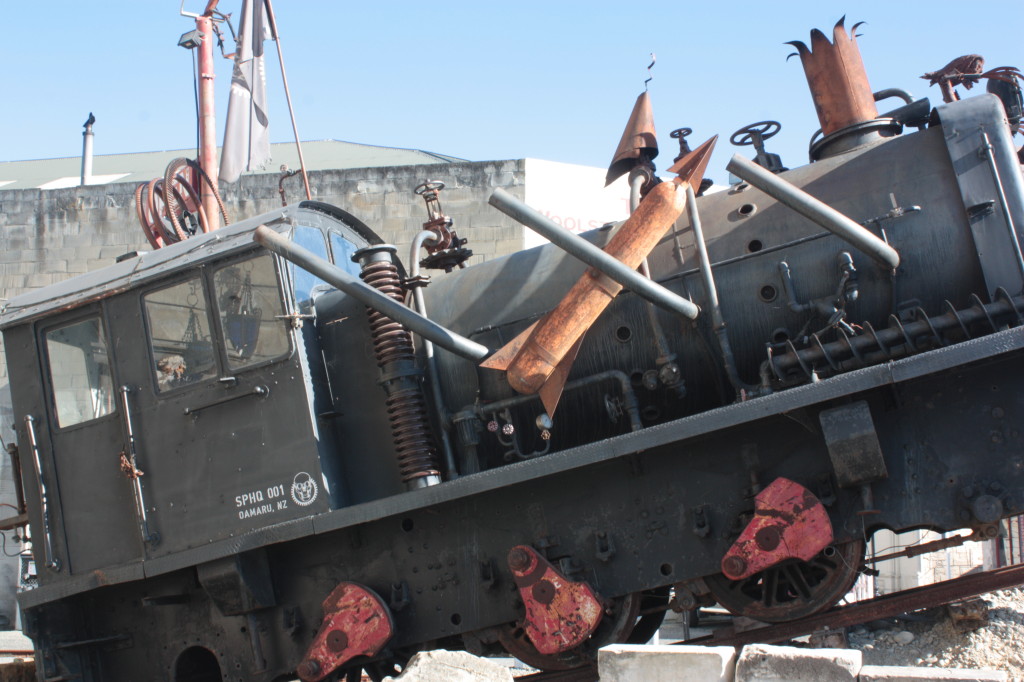 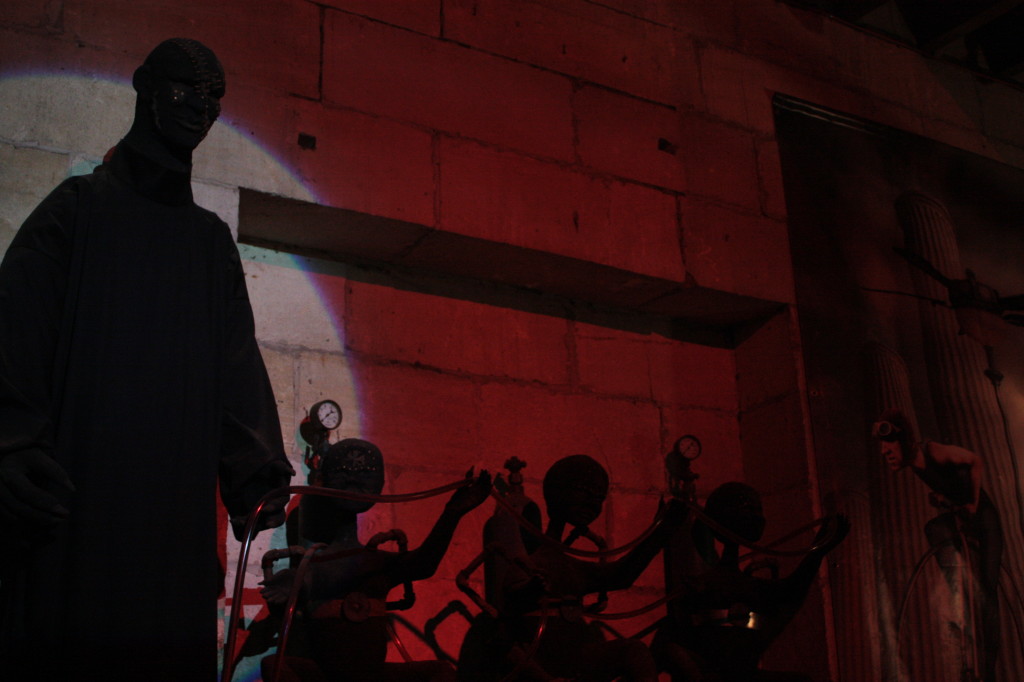 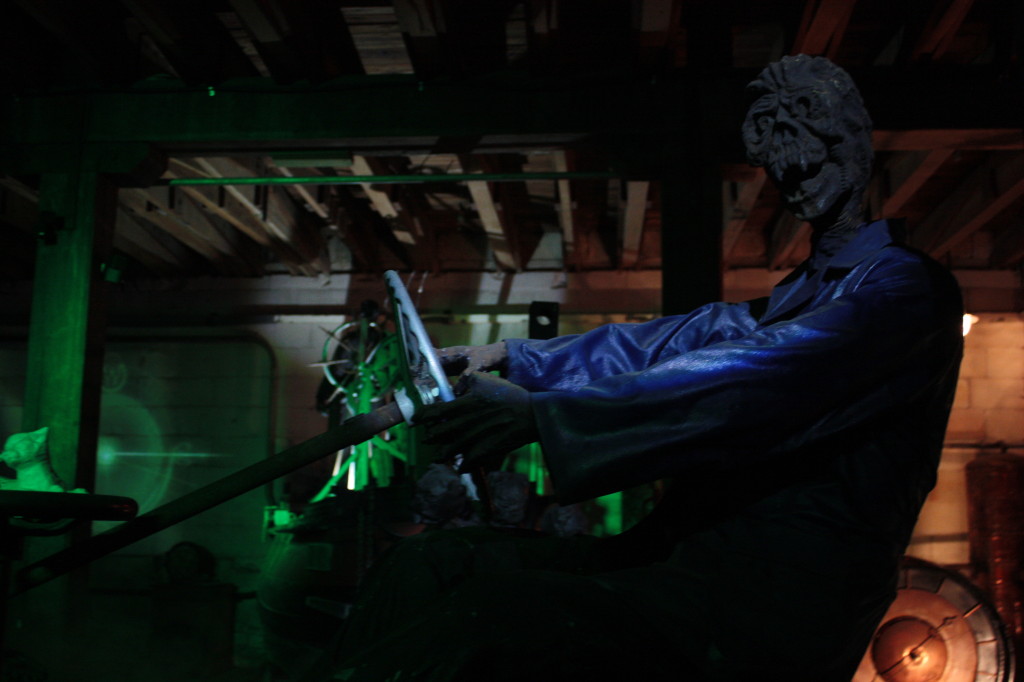 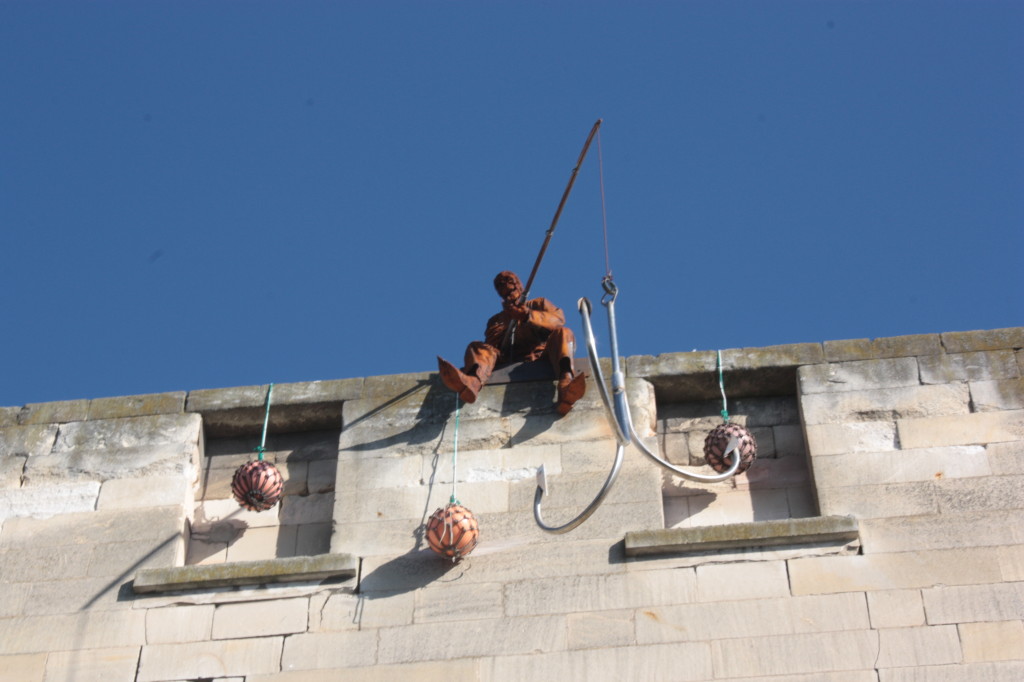 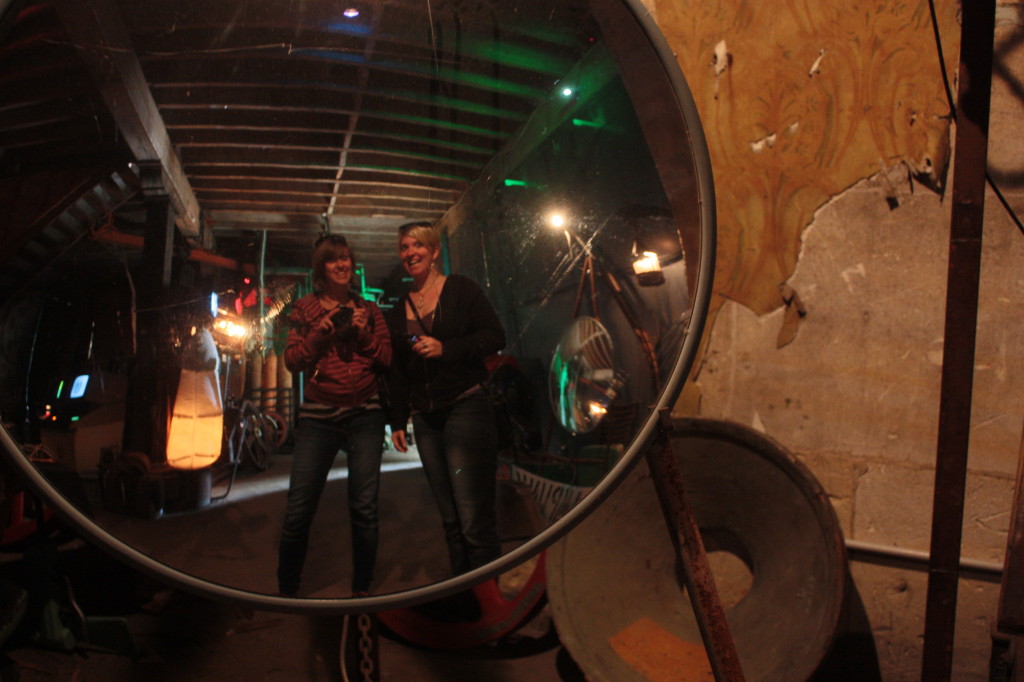 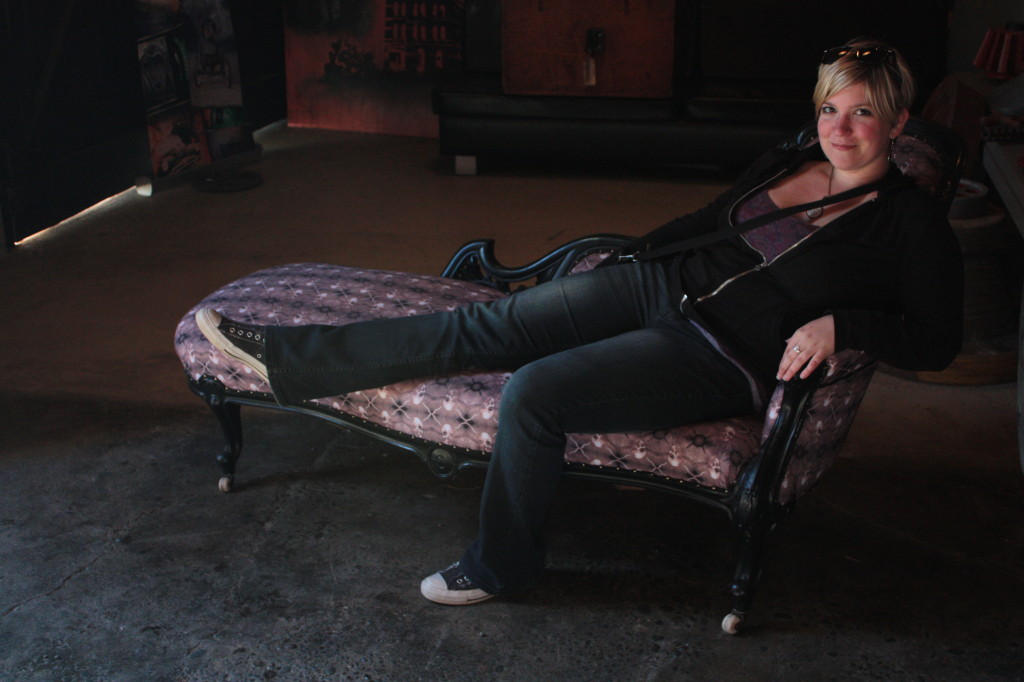 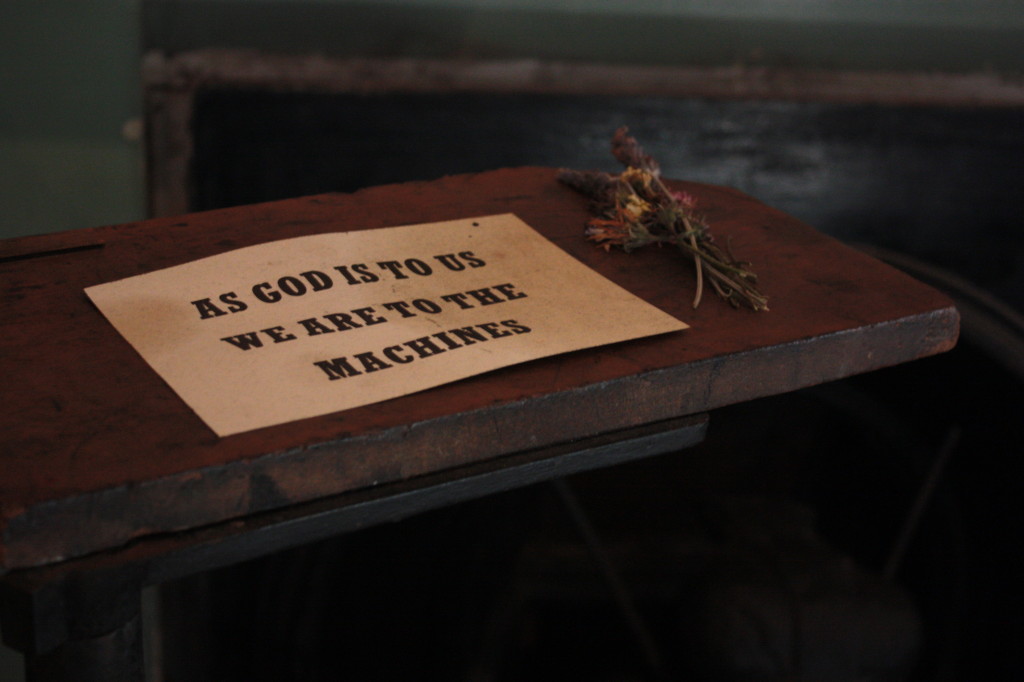 Basically we went into Oamaru thinking there’d be nothing to do and that we’d be bored the entire time, when in fact we ended up having a marvelous time and fell absolutely in love with the city. A definite must visit for anyone traveling through New Zealand.

The following day we hoped the bus to Dunedin. Here’s the only picture I have uploaded from Dunedin thus far: 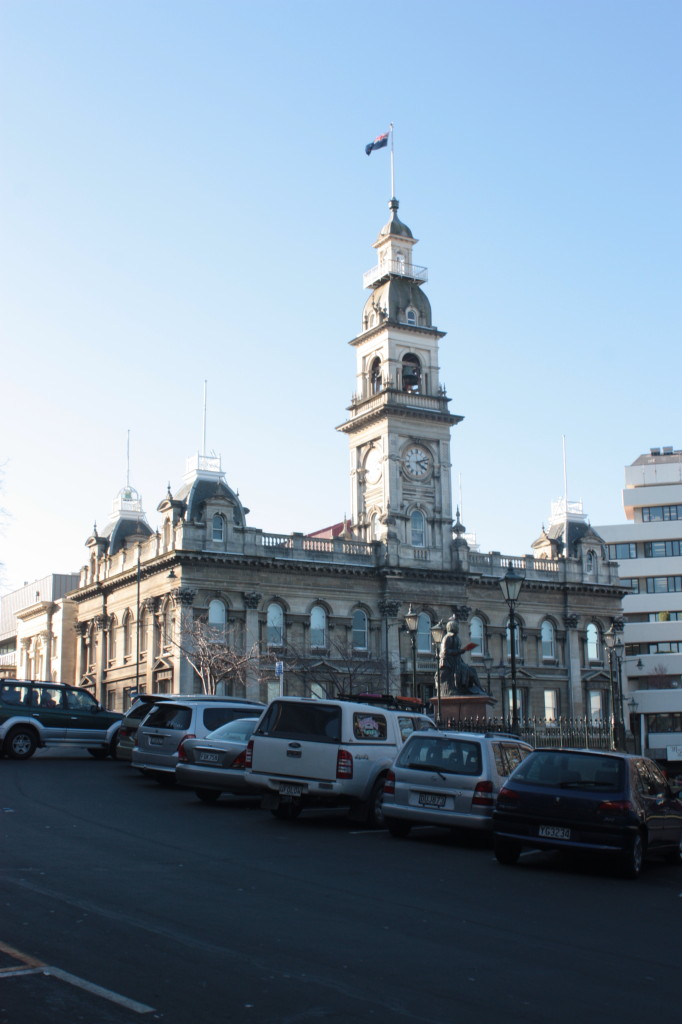 Dunedin is… all right?

Kathleen and I can’t put our finger on it, but Dunedin is just rubbing us the wrong way. Maybe it’s because we just came from Oamaru, where everyone was super friendly and would strike up conversations, whereas Dunedin’s more of a city and everyone’s rushing around. It’s a college town, so you’d think there’d be more to do? We’re also not fond of the YHA hostel here, but that probably has more to do with the two groups of high school students staying there that have woken us up both mornings at 6am because they are so goddamn loud.

There’s also not very much to do here. We saw a cool cathedral and the botanic gardens yesterday, but that’s been it. Not gonna lie, most of our time here has been spent at the library (stealing WiFi), watching Orphan Black, and listening to Welcome to Night Vale. We might check out a museum tomorrow… maybe? We’re kind of super looking forward to getting out of here.

Also, last night we were hanging out with an incredibly inebriated Irish guy named Chris at our hostel. The two of us had been killing the remainder of a bottle of wine out on the deck when he approached us, and the three of us got to talking. He told us about a lot of the places he’s traveled to and why he’s not a huge fan of American politics (but, really, who is?). Eventually, he asked Kathleen and myself if we were a lesbian couple. We told him we weren’t, but were curious as to why he thought that we might be a couple. His response? “You’re just so… happy.” That made us smile. Even though we’re not a couple, the fact that someone can see how obviously happy we are together is just nice to hear. Kathleen’s been such a wonderful travel companion, and the fact that she’s leaving in a month makes me quite sad. It’s been a treat to have her with me this entire time.

Next on the roster is Invercargill tomorrow to WWOOF for a couple days, followed by a quick stint in Te Anau and Milford Sound, and then over to Queenstown. Until next time.

3 thoughts on “Wednesday: Overzelous in Oamaru. Disappointed in Dunedin.”