I’ve been diligently trying to keep a catalog of all my favorite and least favorite places in New Zealand stored in the back of my mind. I’m well aware Wellington, Paihia, and Nelson rank near the top and that Dunedin’s dwindling at the very bottom, and then everywhere else is sort of floating around in the middle. I’m hoping to compile an actual list at some point, probably after Kathleen takes off.

Anyway, these last several days have been spent in Queenstown and it has been, hands down, one of the prettiest places I’ve ever been. It may very well be tied with Wellington for my favorite New Zealand city thus far. 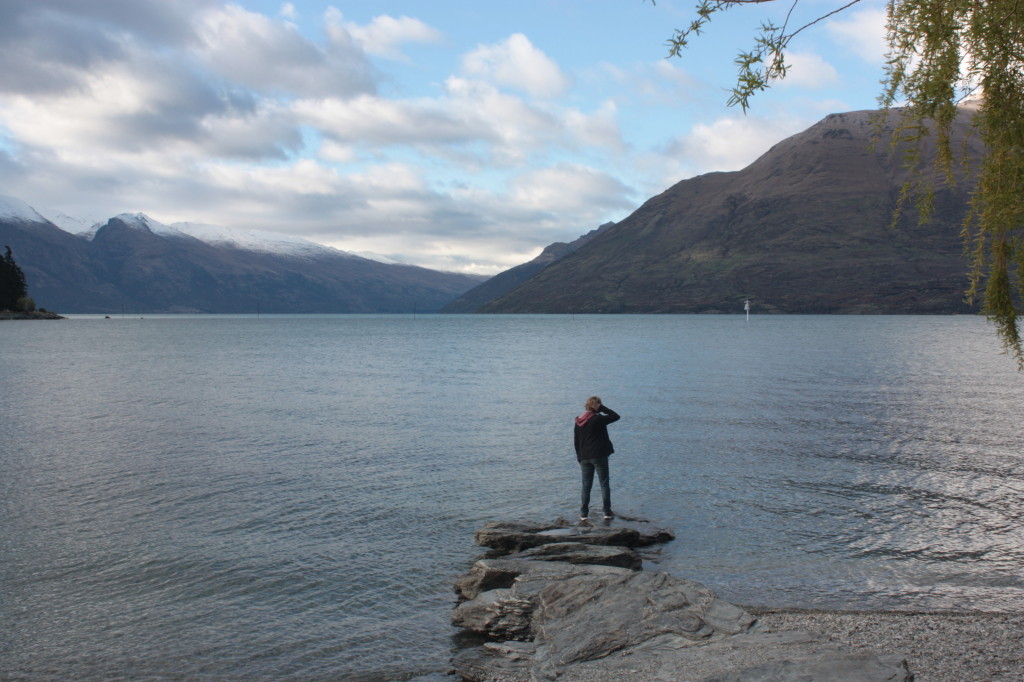 We got in Thursday fairly late, so we kept our goals for the night low. We checked into the hostel, dumped our stuff, and then went out for some delicious pizza. It wasn’t much longer before we were back in our room and already fast asleep.

The next morning we woke up to our first real look at Queenstown, as it had been too dark when we first arrived. Here’s how best to describe Queenstown: Bridgeport mall surrounded by Middle Earth. The downtown area has that Bridgeport feel with both the architecture and amount of cute stores… 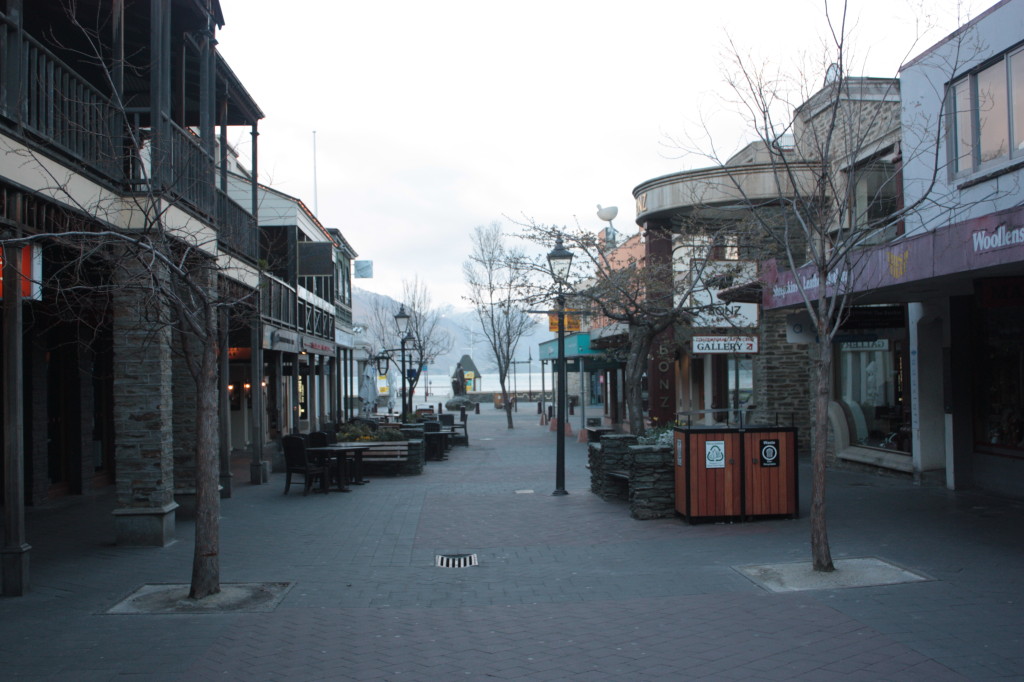 … but at the same time it’s surrounded by all of this: 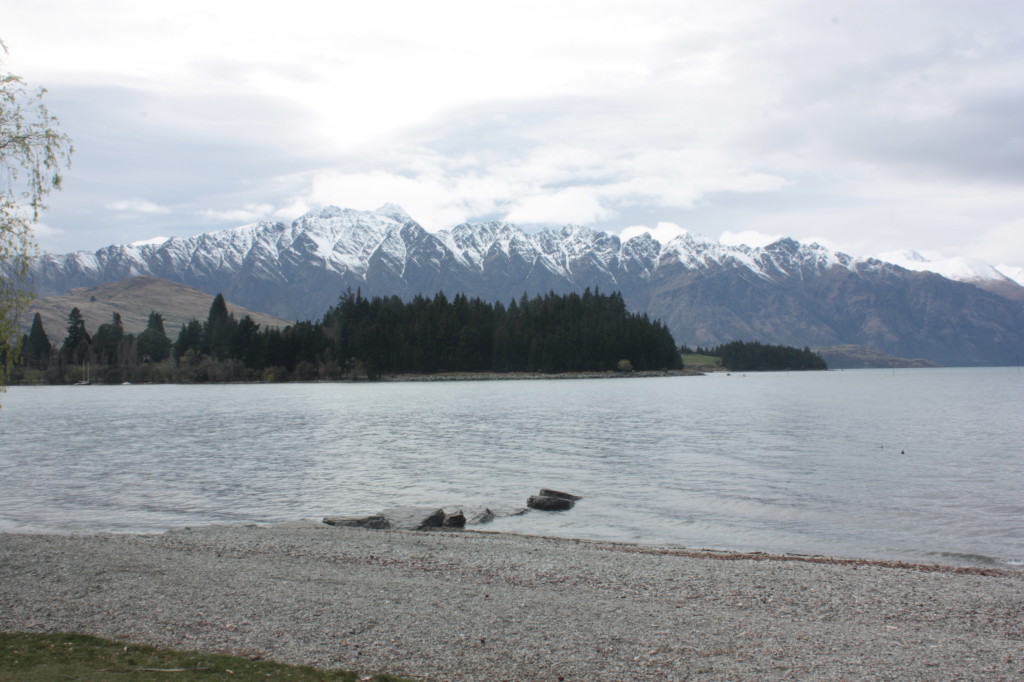 All we’re missing is a drowning Sam.

We spent a good portion of our first day exploring the town and poking around shops. Eventually we ended up back on the water front though and attempted some more jumping photographs.

Jumping photos are obviously not our forte.

We then happened upon the Queenstown Gardens, which – despite being out of season – were absolutely beautiful. 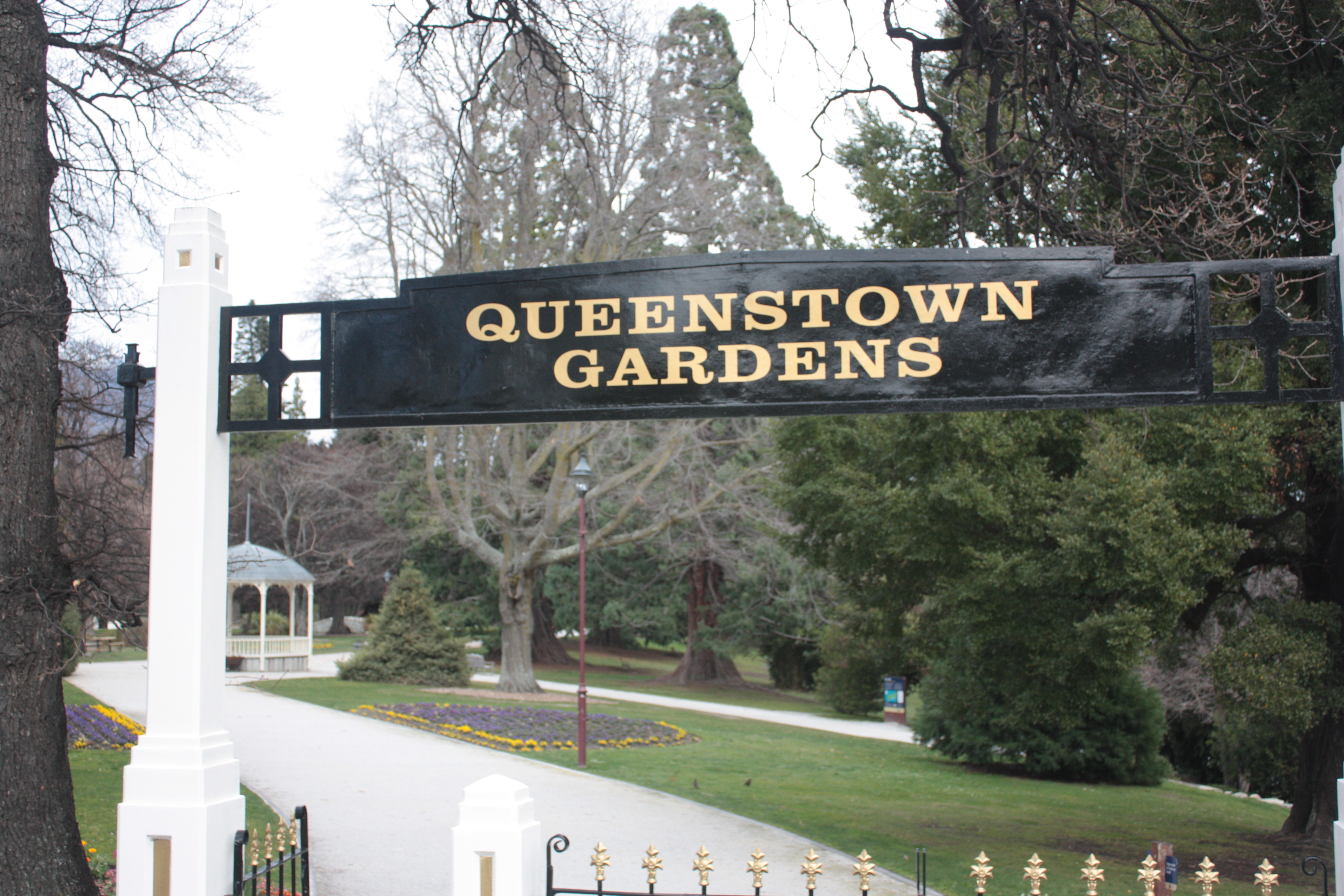 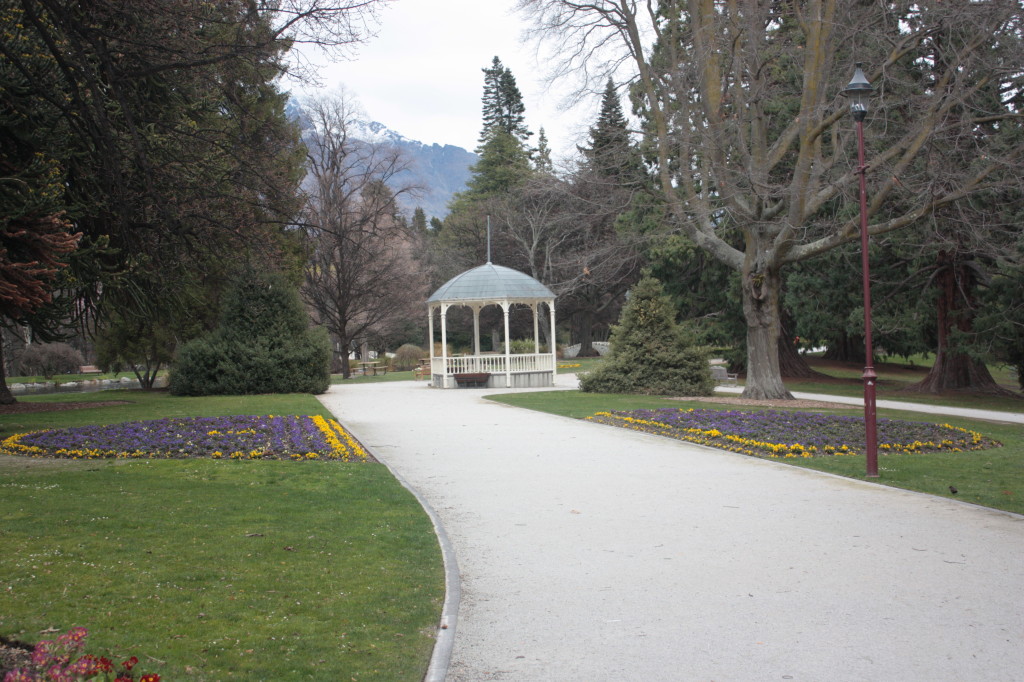 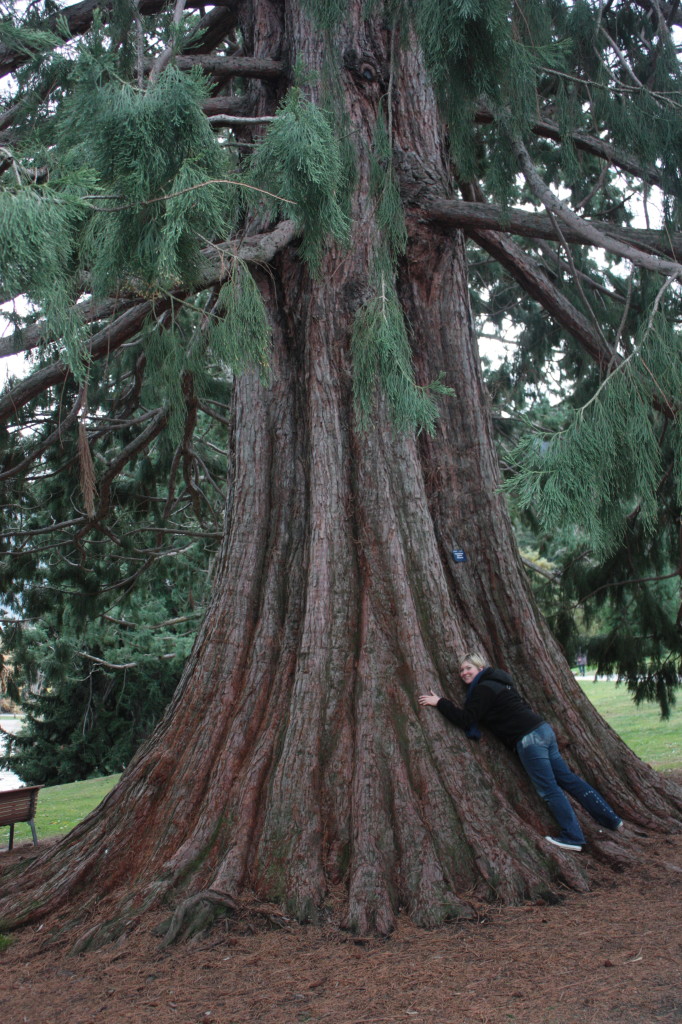 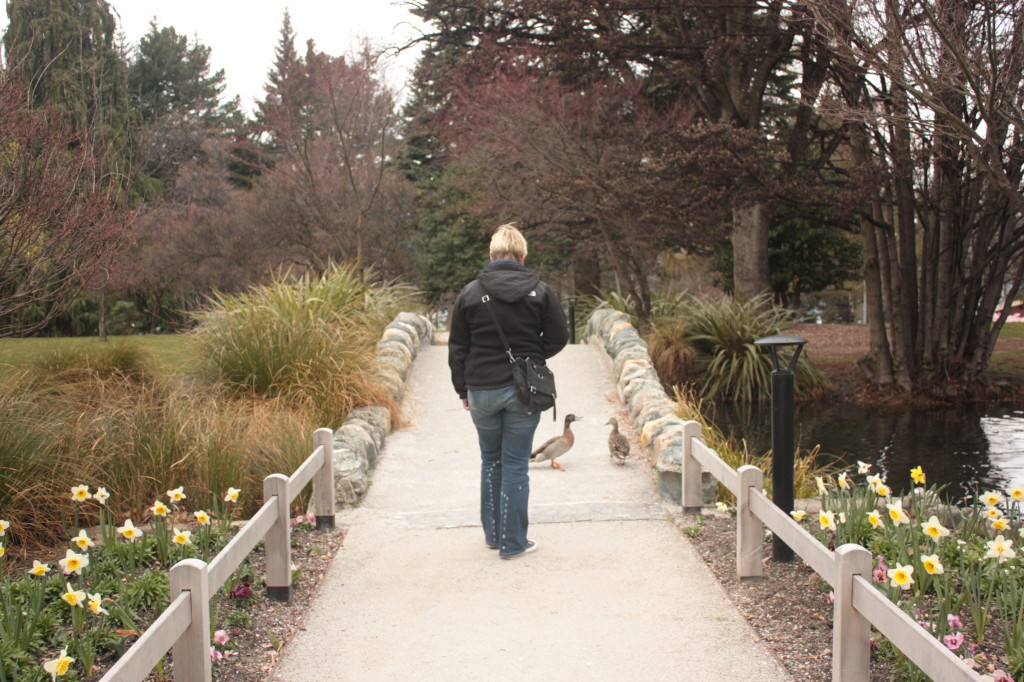 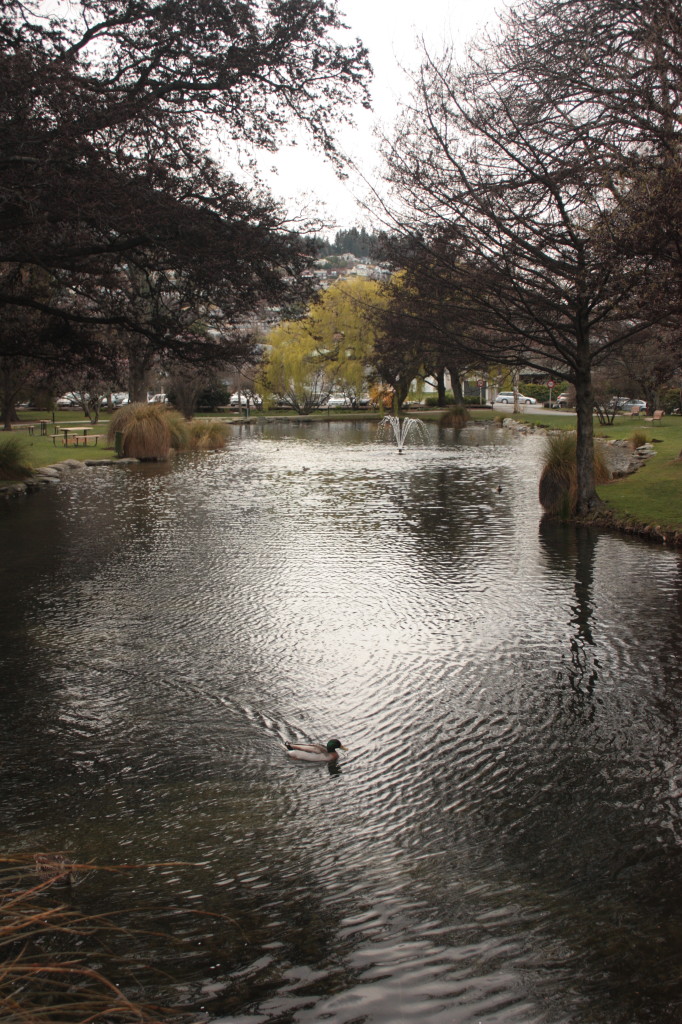 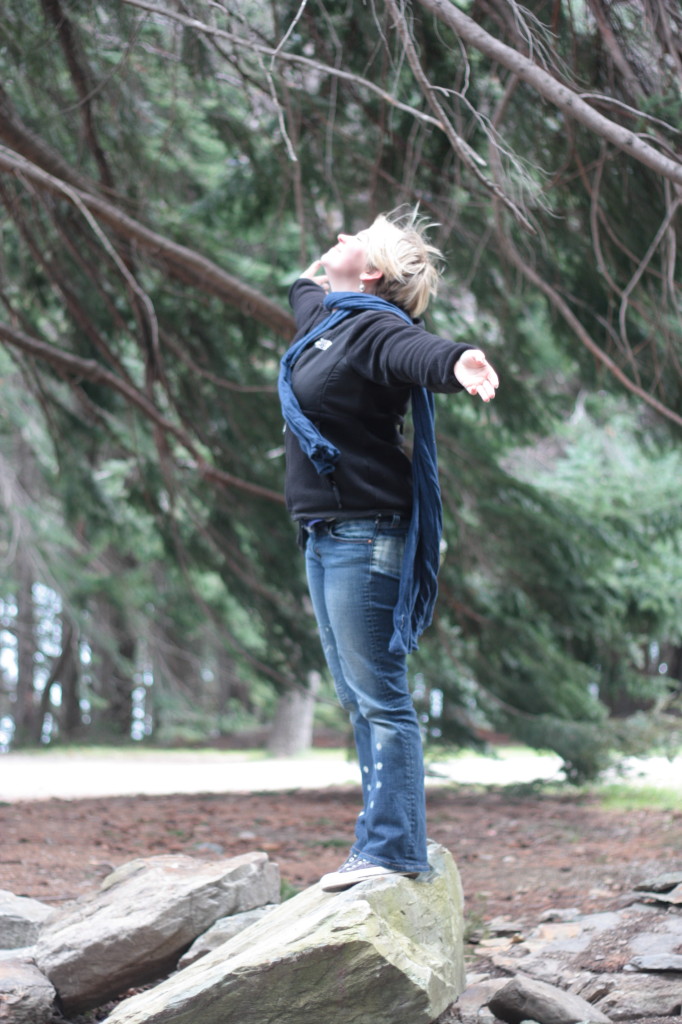 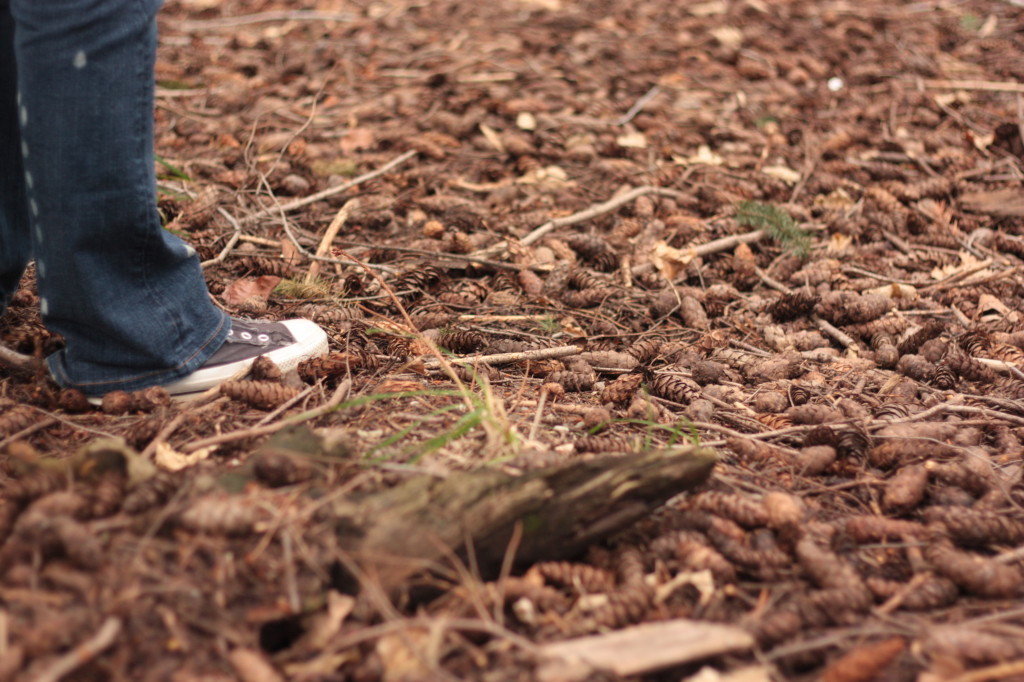 We came back to the water front while we wandered through the gardens, and we absolutely had our breaths taken away. The surrounding scenic views were beyond spectacular. Kathleen spent the entire time giggling like mad while I gawped and snapped over three hundred pictures – none of which do the beauty of the lake and mountains justice. I just couldn’t believe that what I was seeing was actually real. I felt like I had walked into a painting. 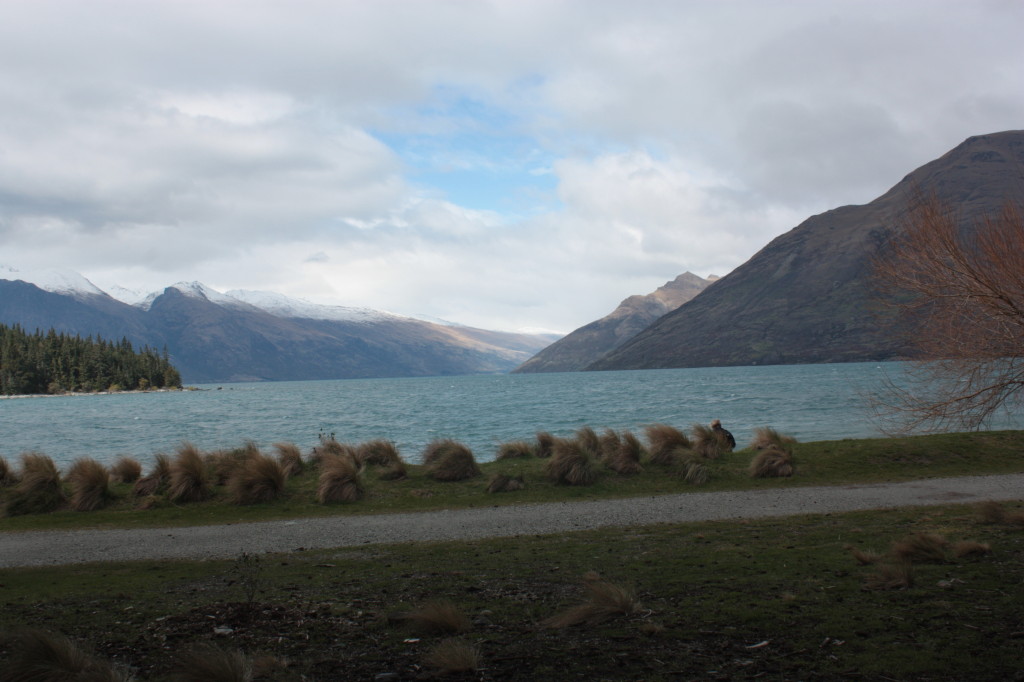 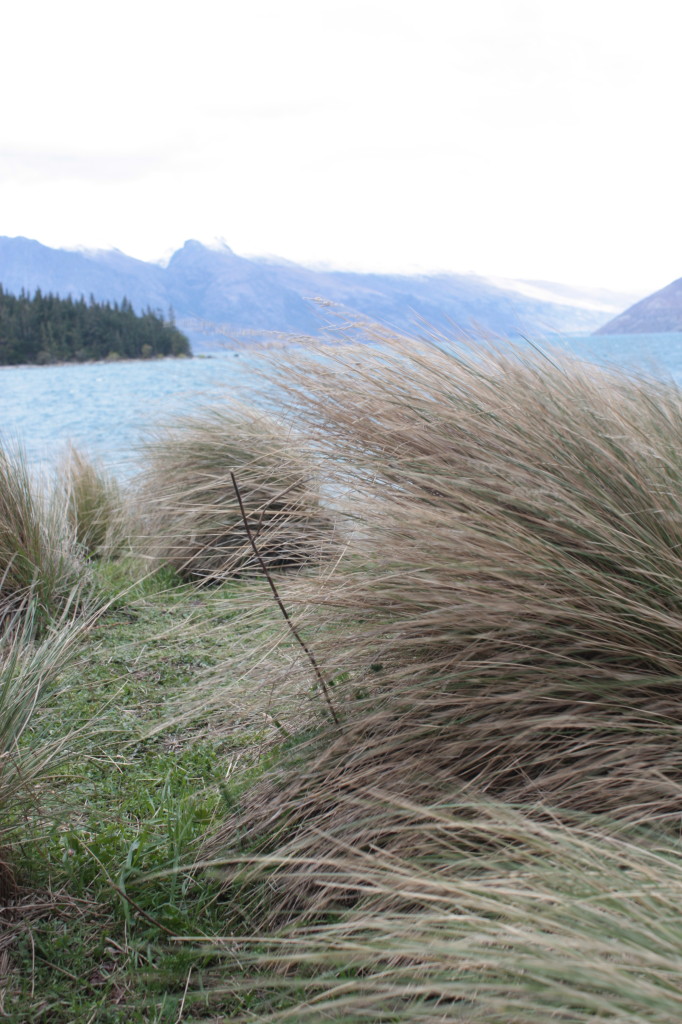 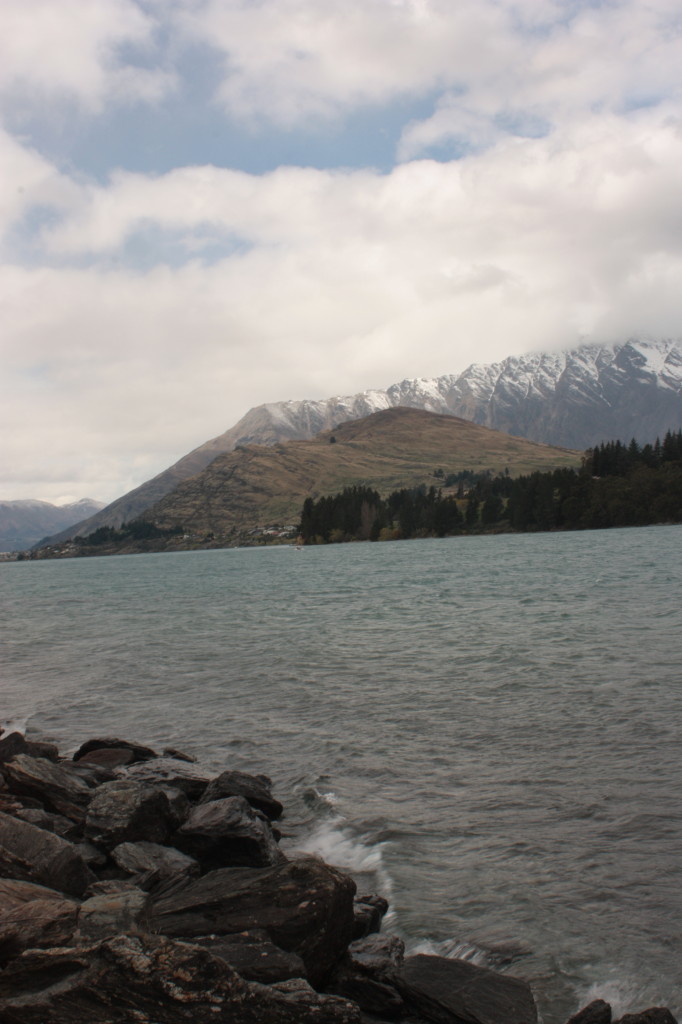 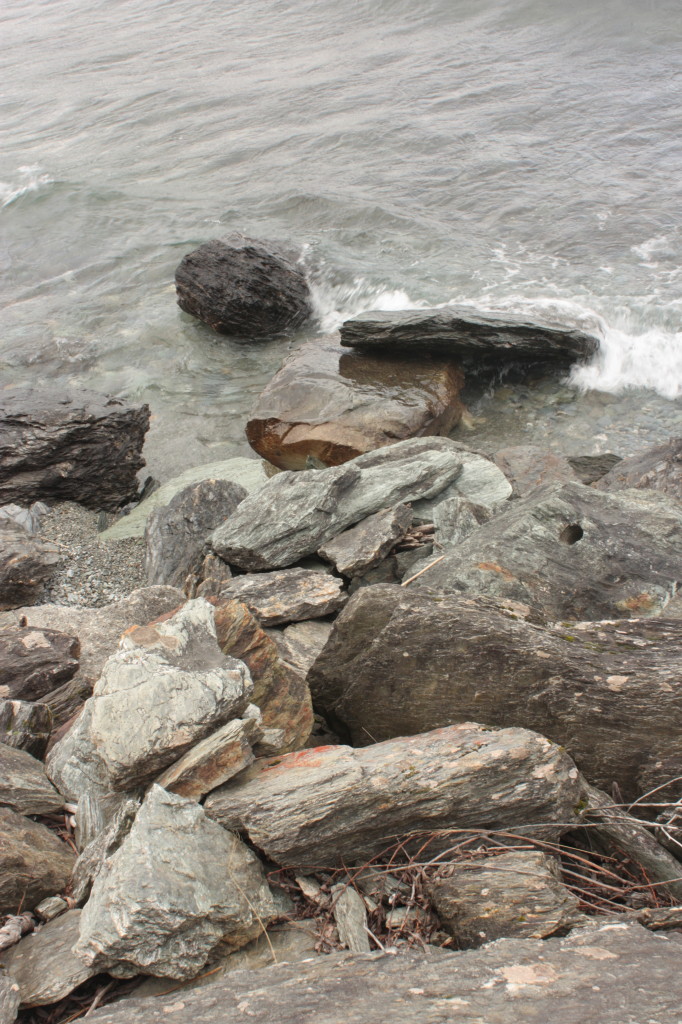 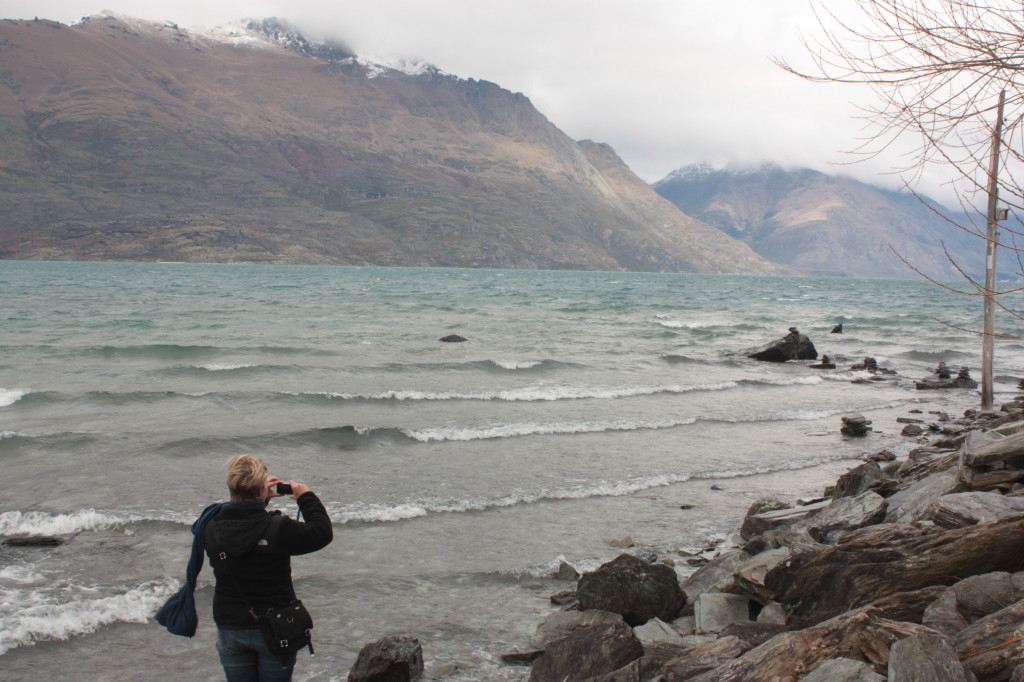 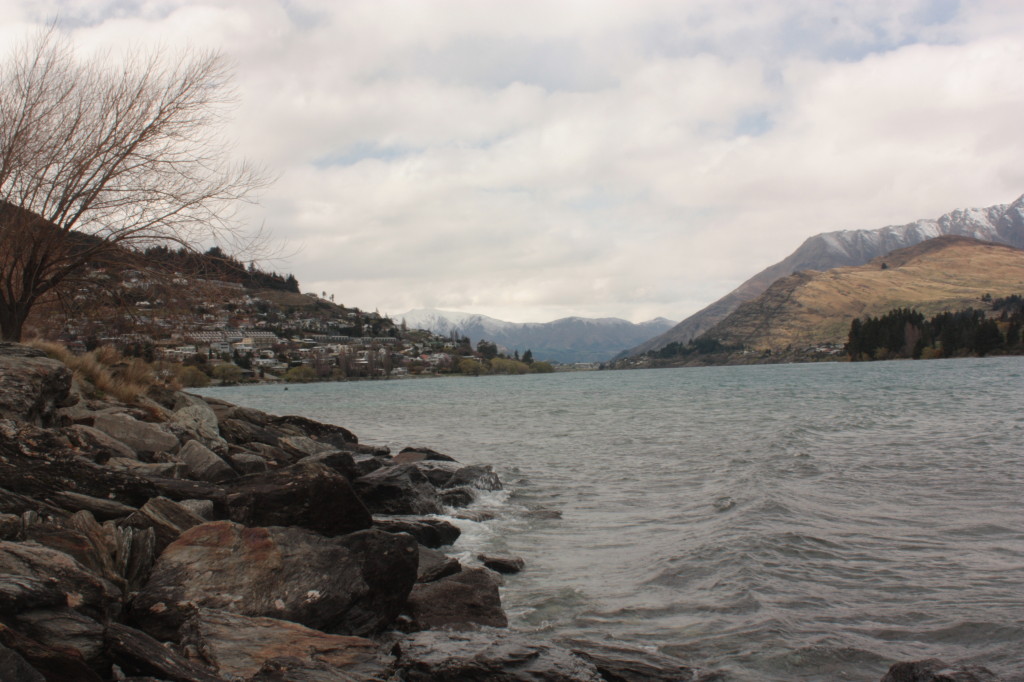 After gawping at the lake for a good long while, we went back into town and tried the infamous Ferg Burger everyone had raved to us about. While certainly a delicious burger, Kathleen and I do think it was a little overhyped. Again, great burger, but people kept telling us beforehand that it was the best burger they’d ever tasted. (Sorry, Kiwis, but Ferg Burger ain’t got nothing on the once-was establishment called Hot Spot.)

That night we ended up hitting a pub for dinner and drinks, and ended the night with dancing to a live band’s music (when a band is playing Mr. Brightside and Mrs. Robinson you can’t not get up and dance). It ended up being one of the most fun nights I’ve had in New Zealand; just kicking back, letting loose, and having fun with my good friend. Can’t get much better than that.

Next Saturday rolled around, which was the day of our rescheduled Milford Sound tour. Up until this morning everyone we had talked to had told us it was doubtful the roads would be cleared by this time and that we shouldn’t bother getting our hopes up. Our hopes stayed reasonably dismal, but we went to the pick up location bright and early nonetheless. We knew that if we didn’t show up then of course the tour would still be on. Murphy’s Law is quite a bitch, isn’t it?

In the end, the tour was canceled. Since we were already up we opted to just get an early breakfast, but not before I seized a photo opportunity. 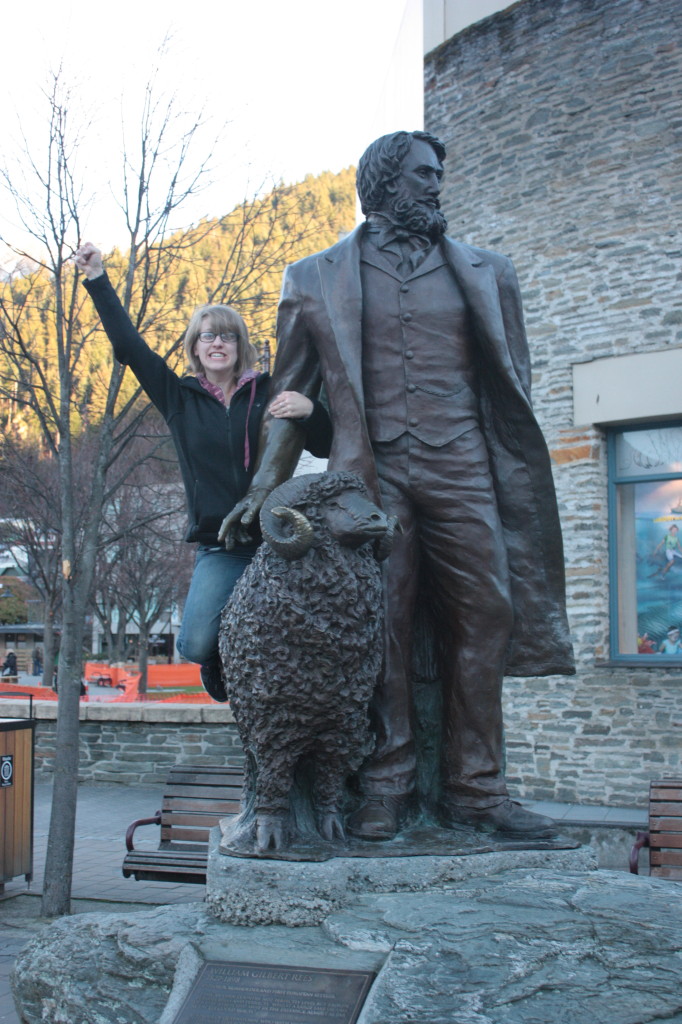 This sums up everything I wanted from my NZ travels.

After breakfast, we headed back to the hostel where we spent the majority of the day being lazy bums and dicking around on Tumblr.

Eventually we decided to stop being such lazy bums and figured we’d check out the town’s Luge. I had never ridden a Luge before and was pretty well convinced I was going to die going down one of the slopes. Or at least crash. Then there really wouldn’t be a point of ever getting my driver’s license, would there?

The gondola ride up the Luge was pretty spectacular. 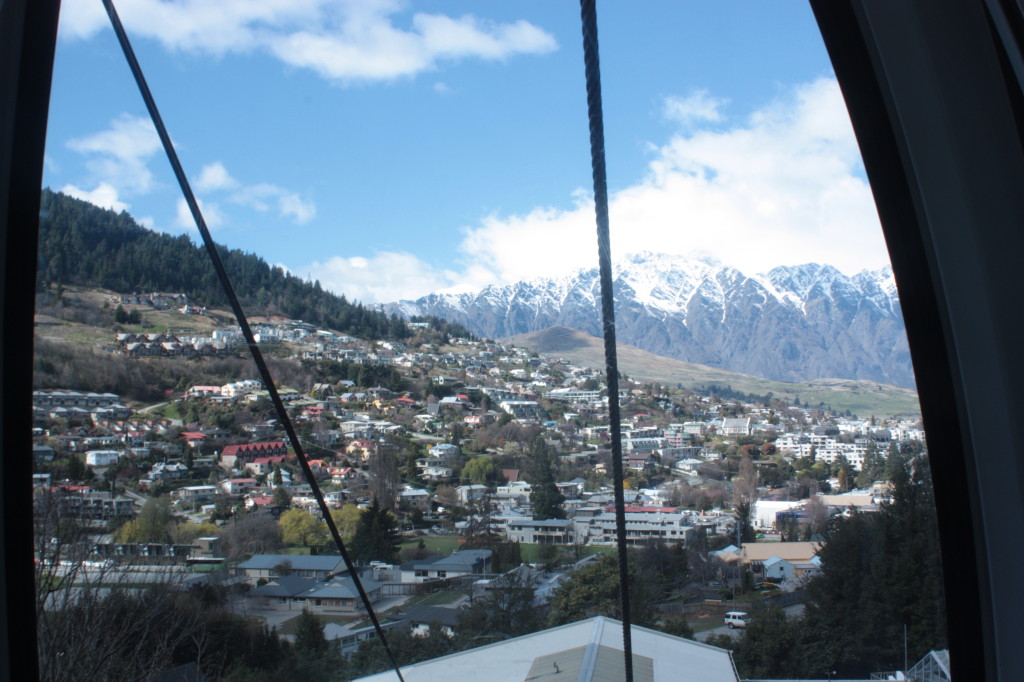 And the view from the top look out deck was even better.

Sadly, I do not have any pictures of Kathleen or myself riding on the Luge carts. We could’ve bought pictures but, as usual, they were all ridiculously overpriced and not quite worth the purchase. I can report that we rode the Lude five times: twice on the “easy” track, and three times on the more difficult one. The first two times I was endlessly nervous and over-braked a lot, but then I began to grow more and more cocky. On the fourth time I almost capsized my cart on a turn, and on the last ride I did one better and ran smack into a wall because I was going way too fast for my own good. I was all right, though a bit sore, and got right back on and rode to the bottom. Besides completely eating it, the Luge ended up being a really fun way to spend the afternoon.

Oh, and we saw more wild goats. They were just hanging out near the road.

Sunday was another big day for us: we were doing Ride of the Rings – which is exactly what it sounds like. This tour, unlike Milford, thankfully did not cancel on us and by 8:30am we were off to go see some Lord of the Rings sites.

The nice driver lady stopped on the way to the stables to snap this picture of us.

The stable required us to wear a lot of gear, which made sense for the most part, though the jackets were kind of overkill. 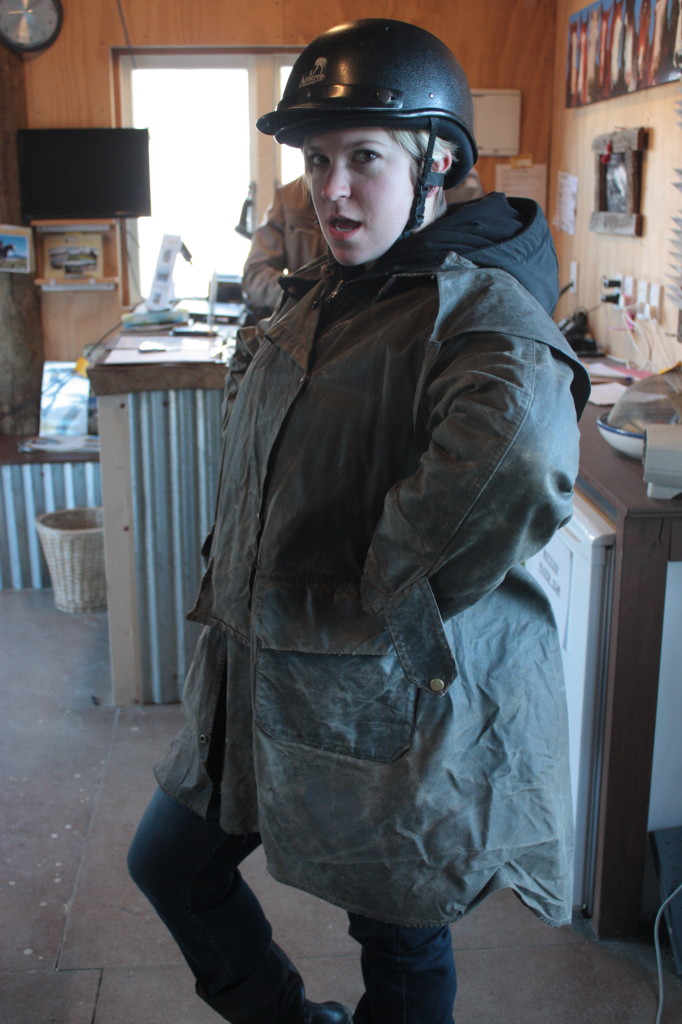 She’s sexy and she knows it.

Once we were all geared up, we went out to meet our horses. Kathleen rode a big guy named Sully and I took a stallion named Chester. Chester was a fat, old, stubborn dude who was both obsessed with Sully and loathsome of the horse behind him (Pippin). I had to give him more than a few swift kicks on the tour to get him to go up hills or across muddy parts, but for the most part he and I got on reasonably well.

It had been forever since I last rode a horse and, even though we were only walking in a straight line, this tour made me realize how much I miss horseback riding. I took lessons for two years back in middle school and had always been disappointed that the lessons stopped. I’ve always had an affinity for horses and, quite honestly, still hope to one day own a horse. Because, hah, nope, I never did grow out of my “I want a pony” stage. I’m also hoping to potentially find WWOOFing work that gets me up close and personal (and possibly on their backs) with horses. 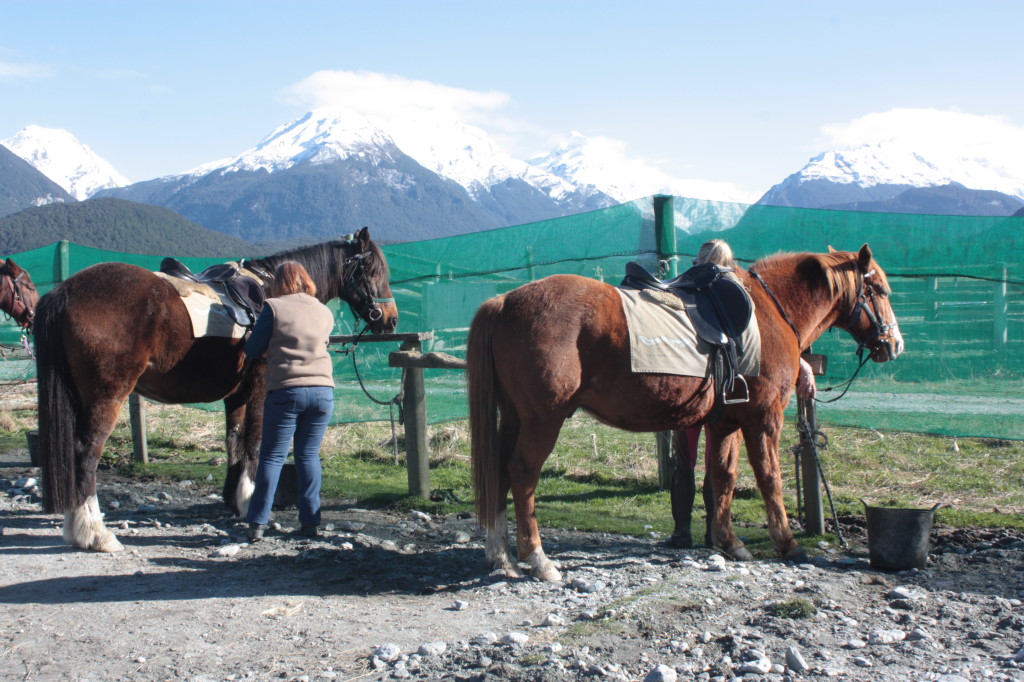 Chester’s the short, fat one.

The tour was beautiful, but I feel like that goes without saying at this point. 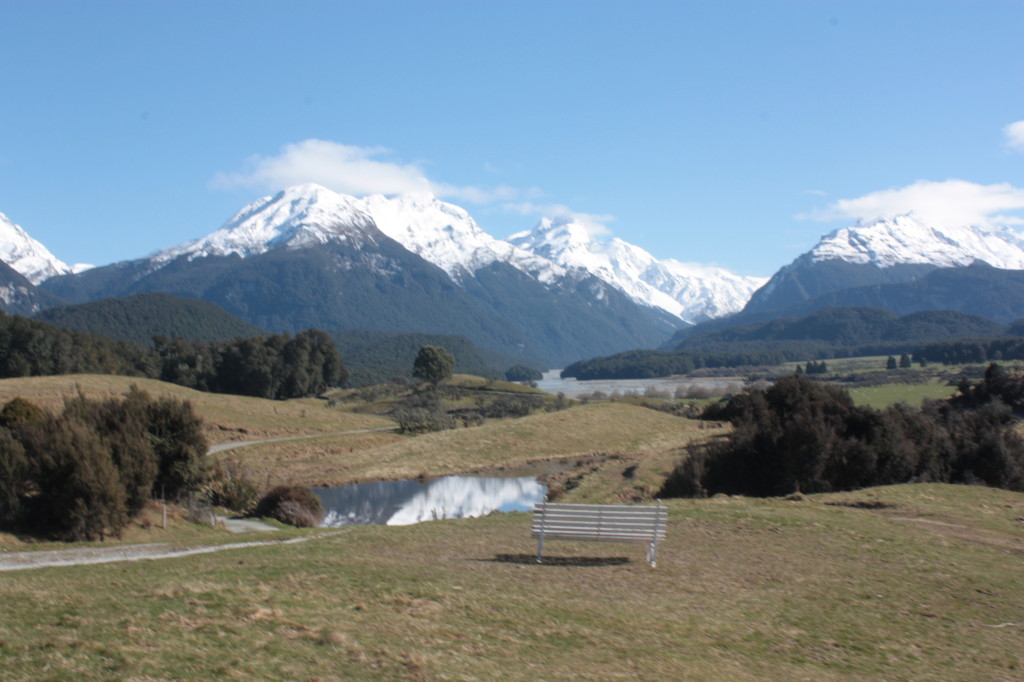 We saw a lot of sights on this tour. Unfortunately, since we were on horseback the entire time, meaning I had to maneuver my camera while still keeping hold of the reins, not all of my pictures turned out well on this one. 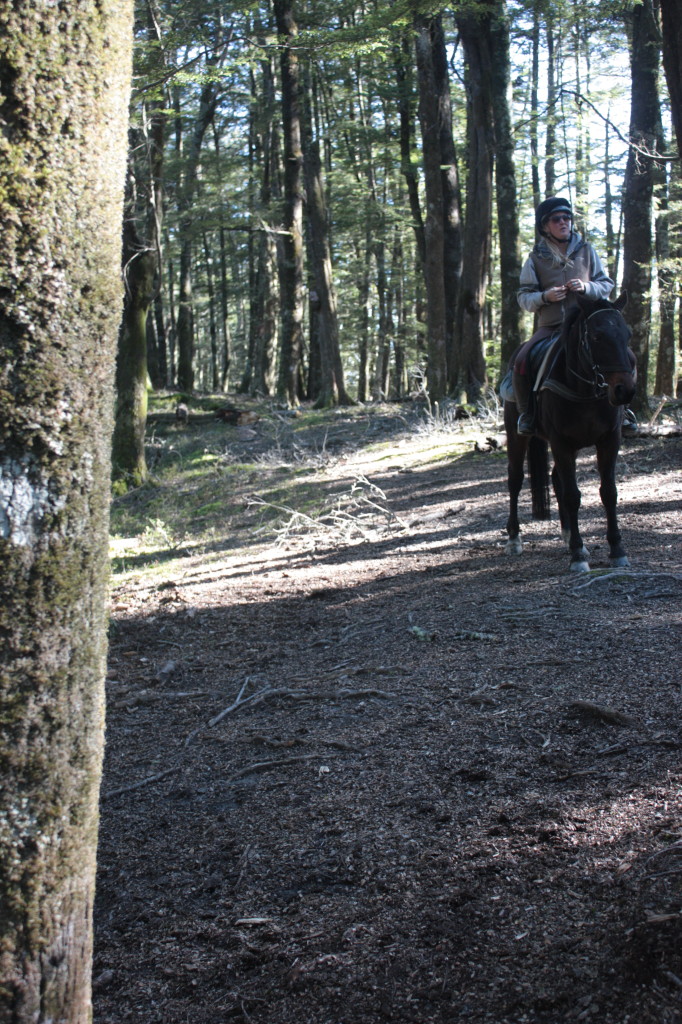 Where the Lothlorien elves snuck up on the Fellowship.

The tree Lurtz pinned Aragorn with his shield. 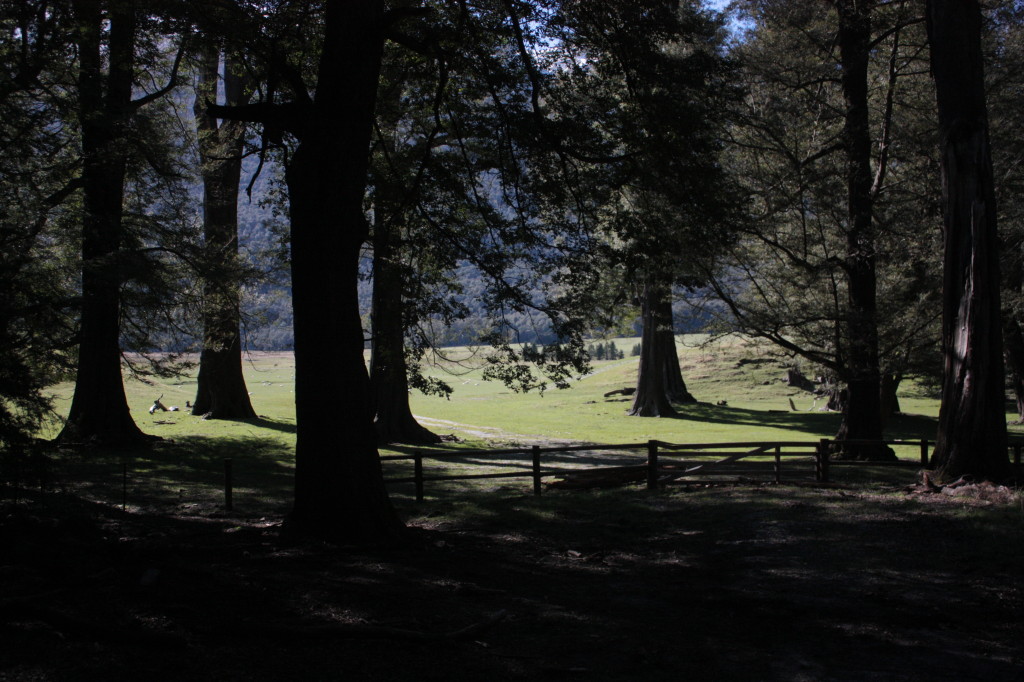 Where Beorn’s home was built for The Hobbit. 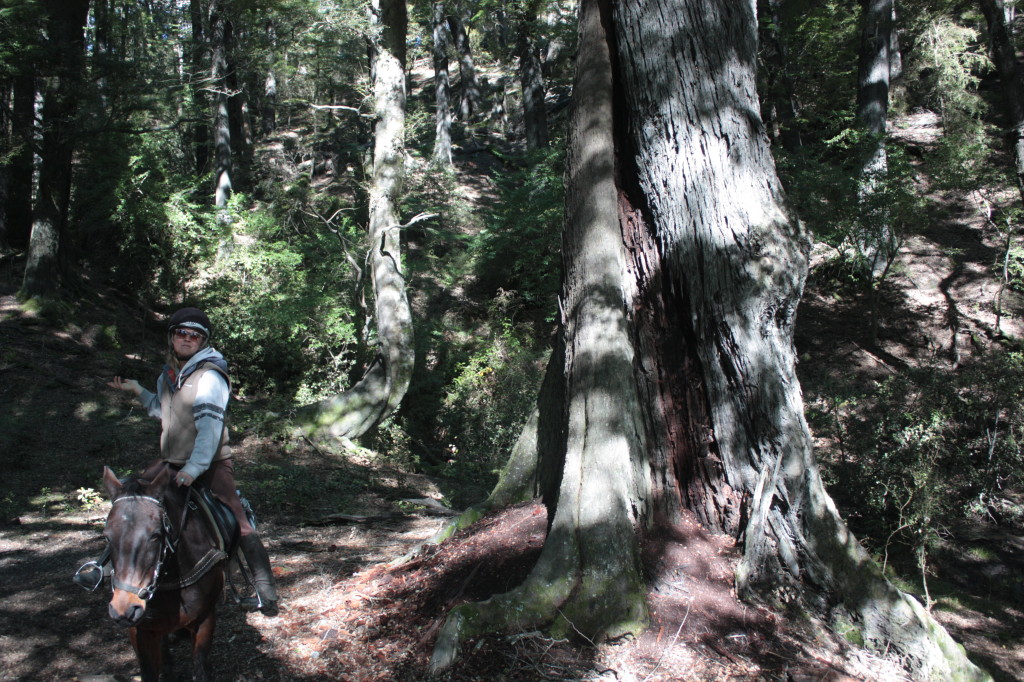 The tree Boromir died beneath.

Kind of a bastard, but I loved him anyway.

Monday rolled around this morning, which meant that we sadly had to leave Queenstown. Both Kathleen and I were sad to see it go, but were still excited for all the things we had left to see and do on the south island. Our next stop was Fox Glacier, which we had heard wonderful things about.

As we boarded the bus this morning, the bus driver let us all know that there had been an avalanche earlier that day on the road, but that it was most likely going to be cleared off by the time we got to that part of the trip. This should have been concerning right off the bat, but the bus driver seemed so optimistic about the whole situation that we thought we had nothing to worry about. So I shoved my headphones on, turned on Aida, and stared out the window while zoning out and occasionally dozing.

It shouldn’t come as a surprise that the roads were closed and we had to turn the bus around.

Today was kind of a waste, in the sense that we sat on a bus all day long and didn’t do anything besides listen to music and play games on our phones. I suppose we did get to see some beautiful areas though. 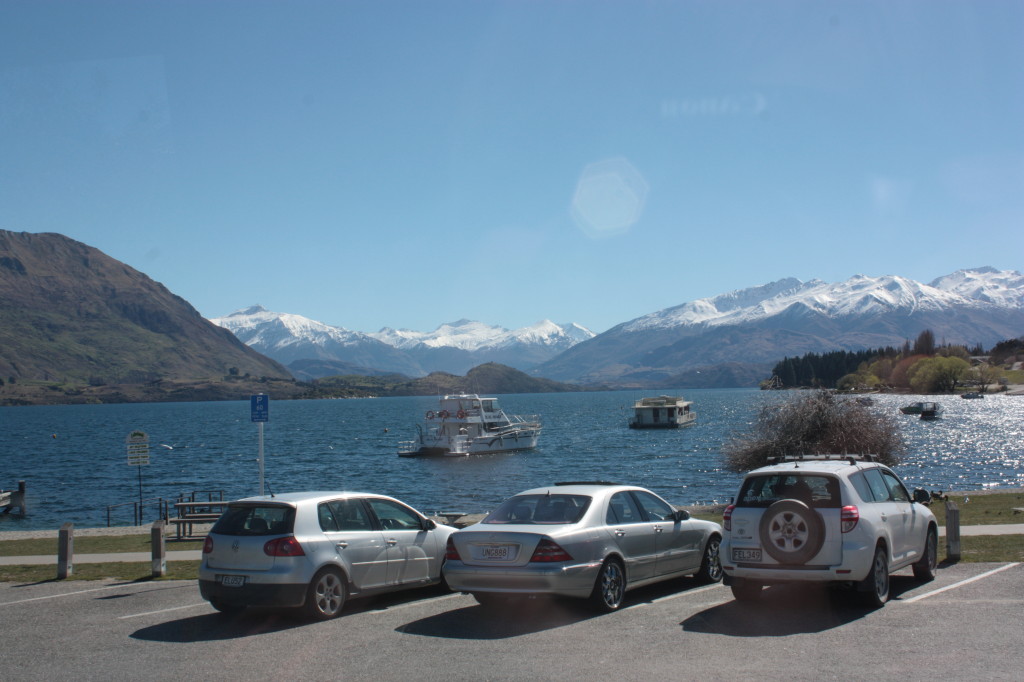 Plus we had a one hour pit stop in Wanaka and managed to have quite a bit of fun. 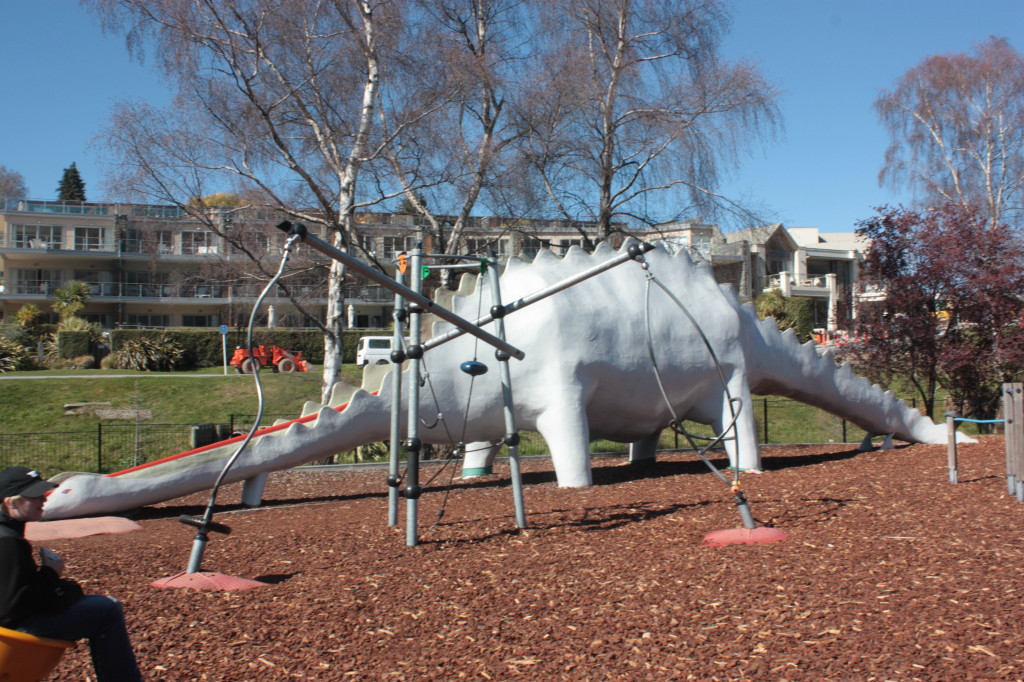 A stegosaurus slide? That’s it. I can go home. Nothing is gonna top this. 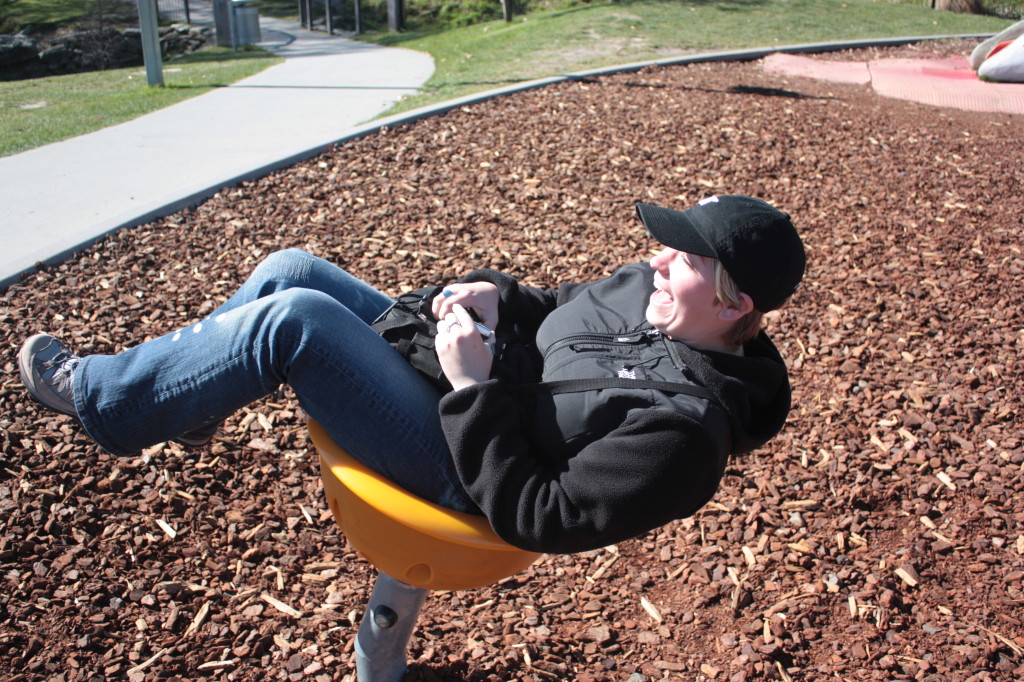 Kathleen discovers the joys of the spinny yellow bowl. 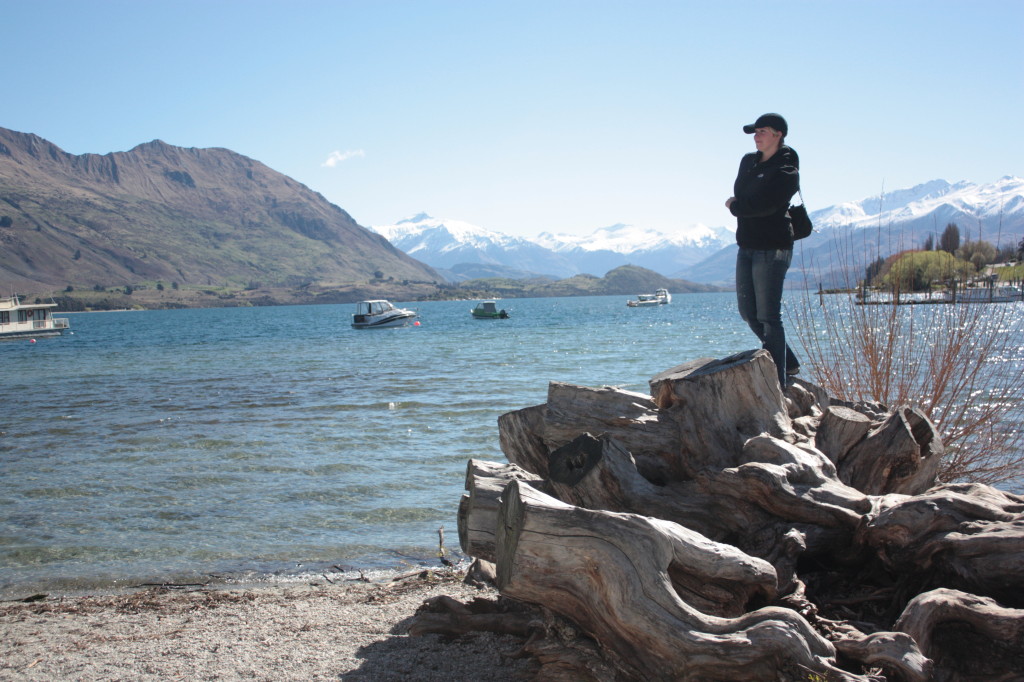 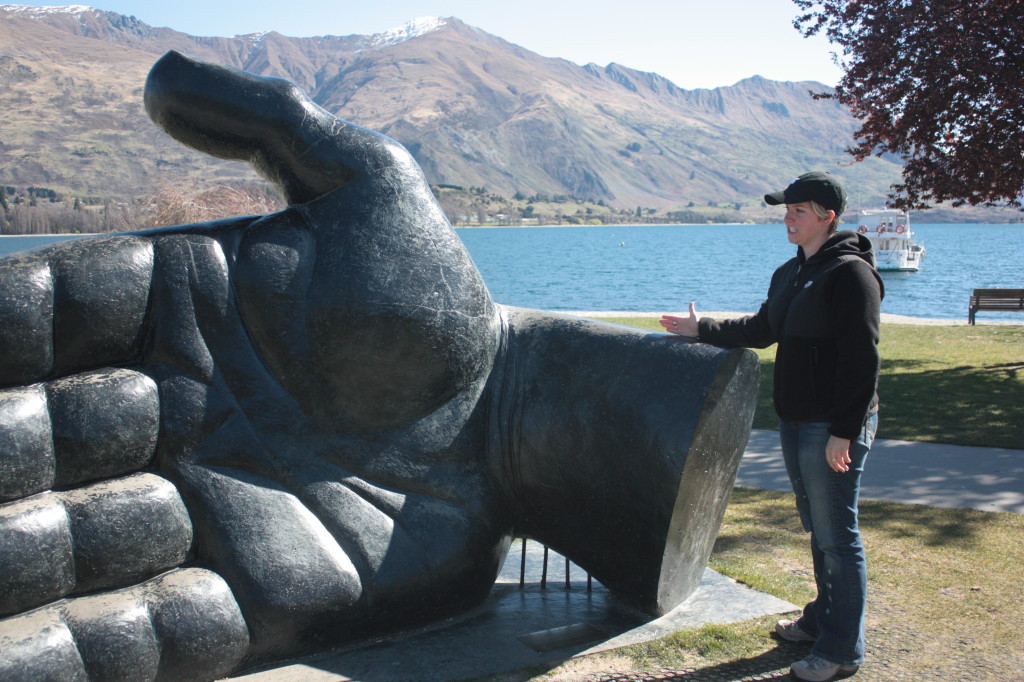 So we’re back in Queenstown for another night. We grabbed dinner with our new pal, Cheryl, who told us all about her time at Milford today.

We’re flying to Wellington tomorrow, which is something we didn’t think we were going to have to do during our journey. The thing is, the road is closed for the next two or three days, so the only other option besides waiting it out would be to trek all the way back to the other side of the island and go up in that direction. Basically, both those options are pretty time consuming and, the thing is, we don’t have that much time to spare. Kathleen’s leaving the country in fifteen days, so we’re trying to get in as much as we can during that time. We still have Hamilton, Taupo, Matamata, and New Plymouth to hit up, after all. So we’re doing three nights back in Wellington (cause we’ve missed it) and then we’re going from there.

It’s sad we’re missing out on Milford, Mount Cook, Fox Glacier, and all the other beautiful parts of the south island’s west coast, but I’m more than hopeful that I’ll make it back down at some point to see it all. I’ve got ten months. I think I’ll manage.