Kathleen and I celebrated our two month travel anniversary just a couple days back – hard to believe so much time has gone by already, right?

It’s been one hell of a trip so far. I’m starting to get a bit nervous because – heh – money’s slowly becoming more and more tight. I’m heading up to Paihia with Cheryl, I’m fairly certain, after Kathleen takes off, but I’m pretty sure once I’m up there I’m gonna need to find either a WWOOF or Workaway gig – possibly a short term, part time job that actually pays me money. Then I’ve gotta make my way south back to Wellington to hopefully find myself a full time job and someplace to live for a while.

Anyway, enough of that. Remember Alison, that lovely woman I sat next to on the flight to New Zealand who offered to let us come stay with her during our travels? 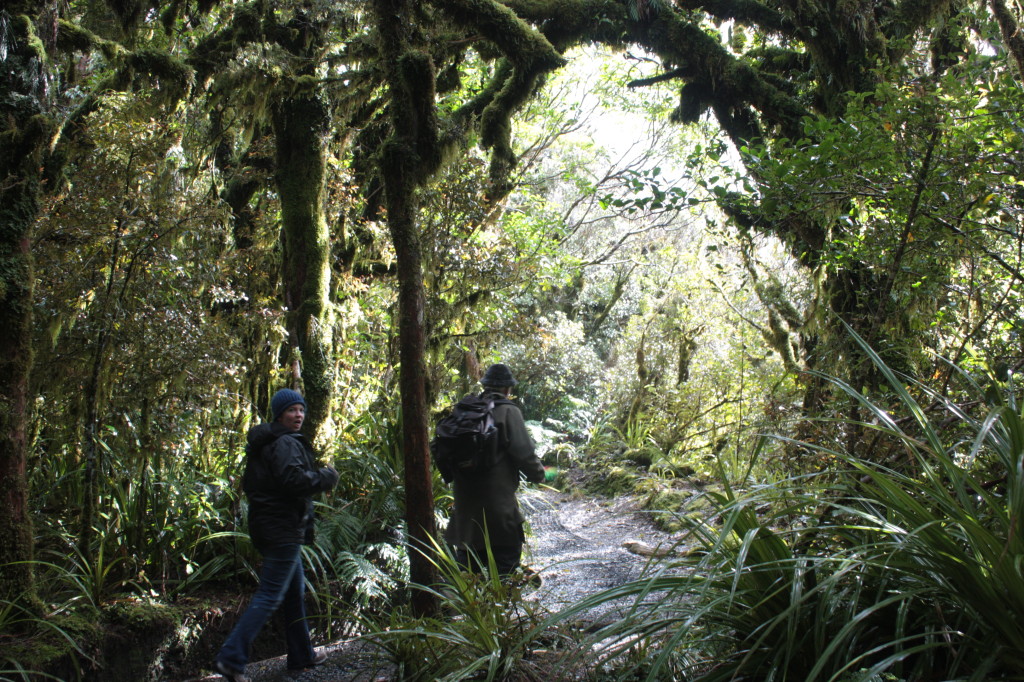 We stayed at Alison’s house for three nights with her and her husband Phil. Our stay with them was reminiscent of our time with Sky and Kirti. The house was lovely, the food delicious, and the stay enlightening. Plus Phil and Alison were just a wonderful older couple who seemed interested in where we are in life and everything we think of the world, and they had plenty of stories to share with us. Basically, it was just an awesome couple days with them. 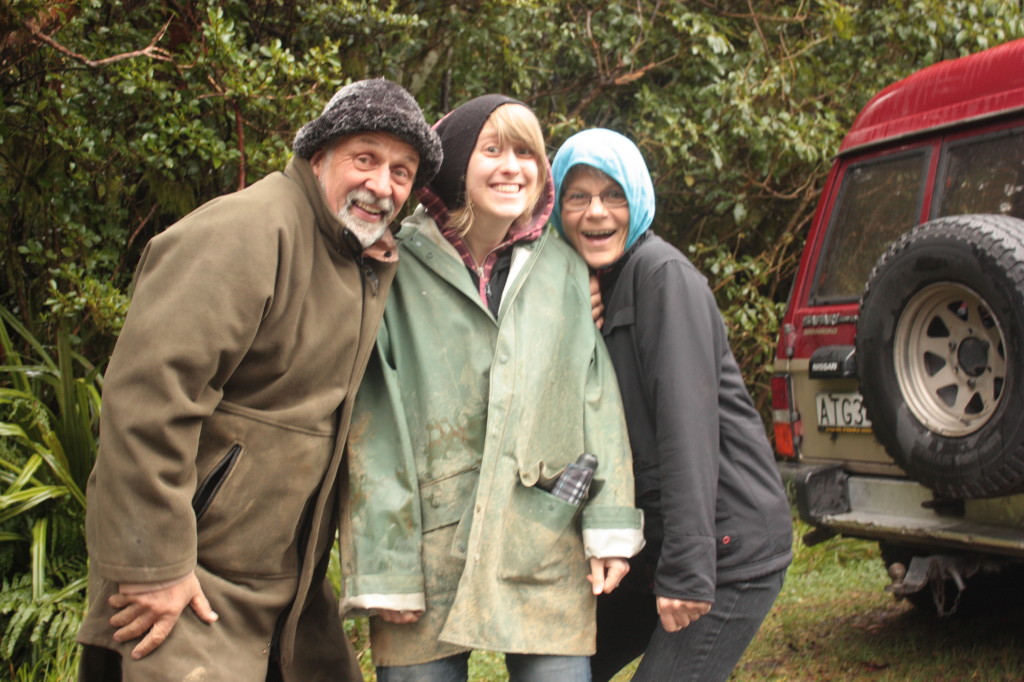 Our first night we stayed up till 11pm having a nice long chat with some Cognac by their fireplace. We talked about everything you can think of – school, religion, sports, film, dating, family, pets, you name it. Kathleen and I then retired to their guest house, which we got all to ourselves. I spent the rest of my evening watching Ratatouille on the tiny black and white TV in my room and listening to the rain fall. It was quite picturesque.

The next day we were up bright and early for a hike with Phil. The weather was less than ideal, but Kathleen and I sucked it up and didn’t complain about it once. Phil thought the hike was only a half hour long, but we soon realized that it was actually closer to two hours. Lucky for us the hike was beyond beautiful. 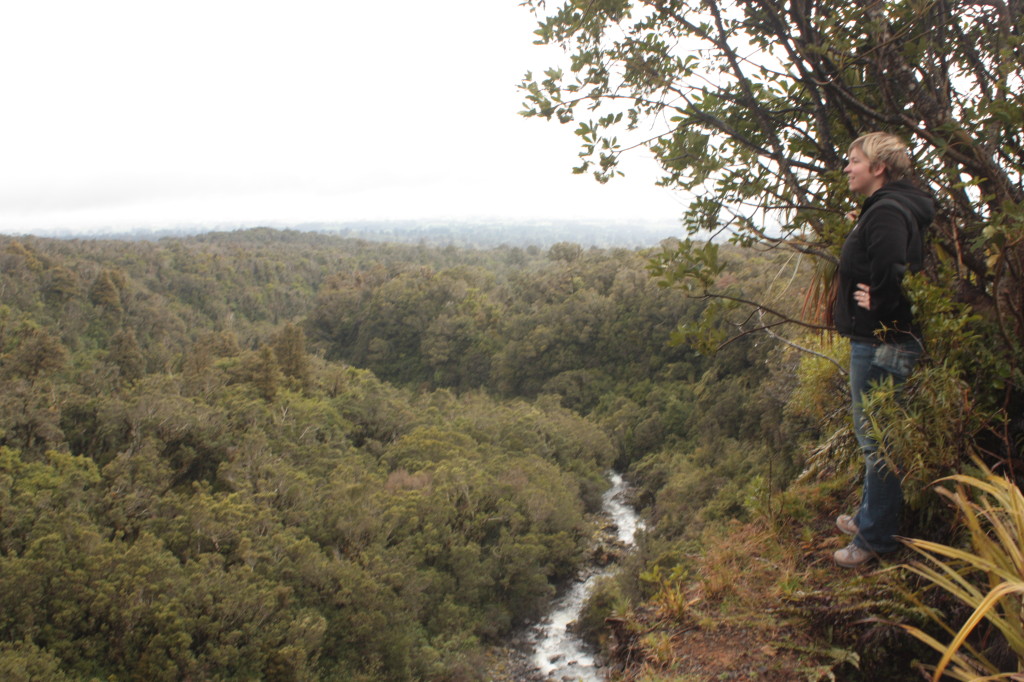 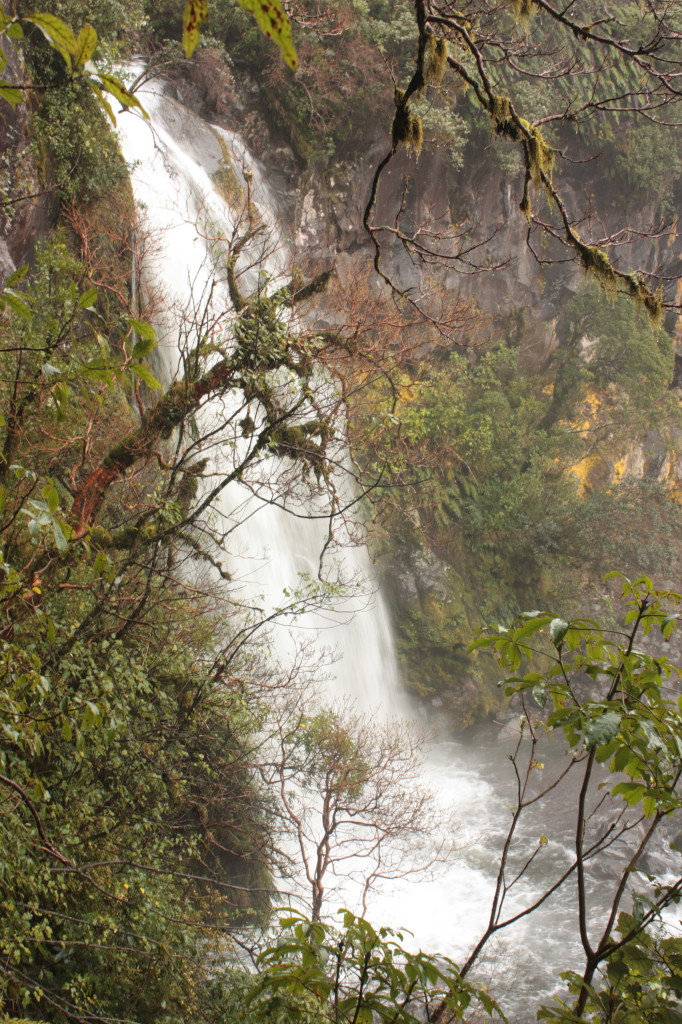 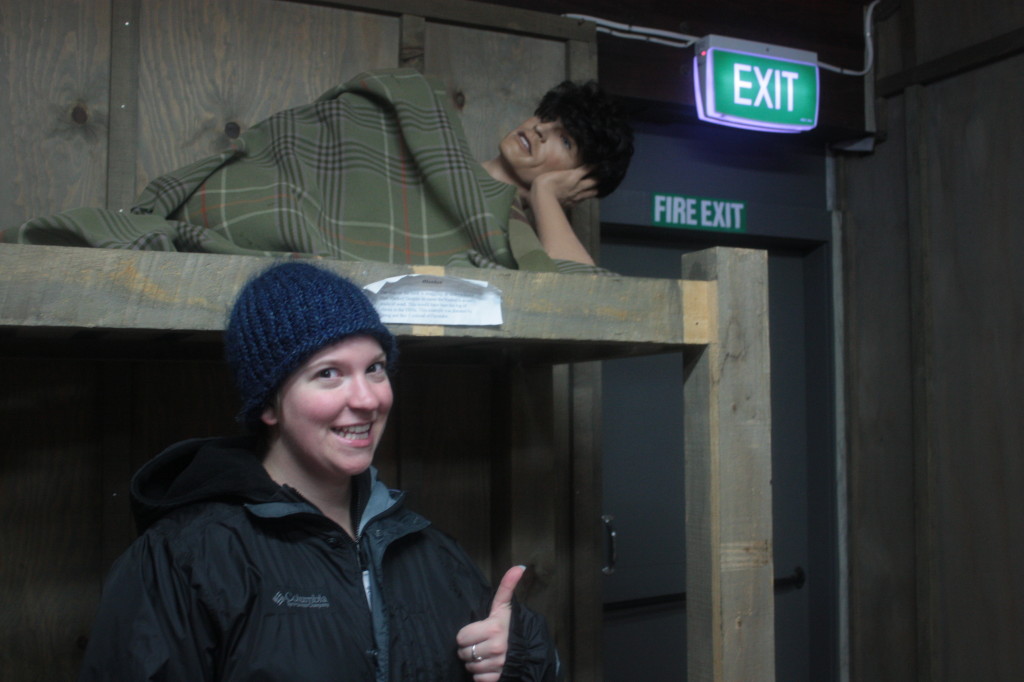 Kathleen made a friend in the visitor’s center. 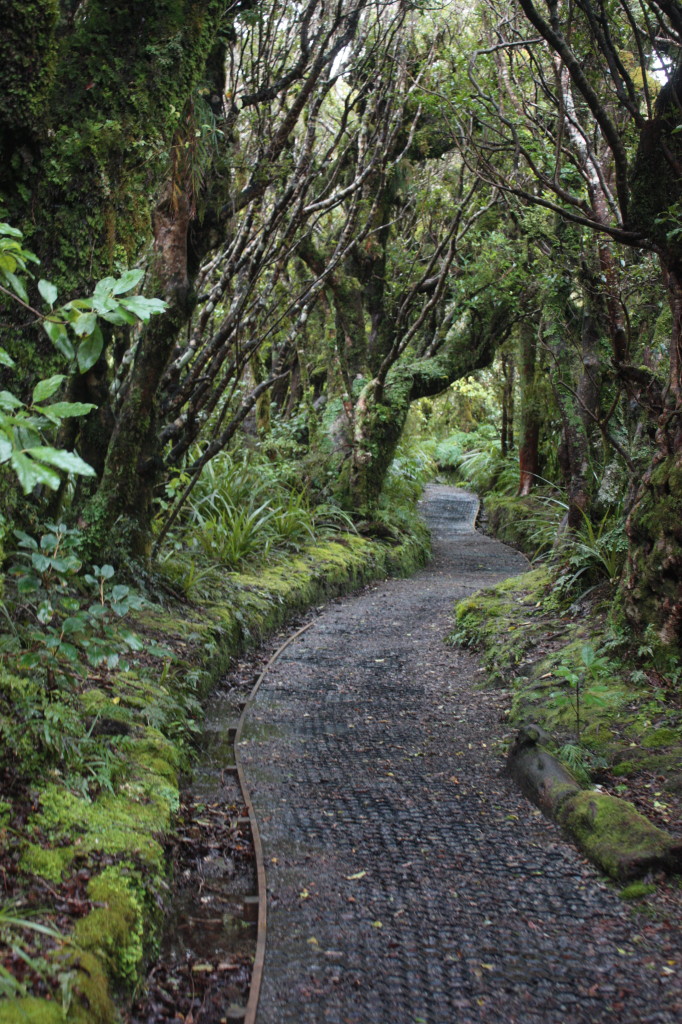 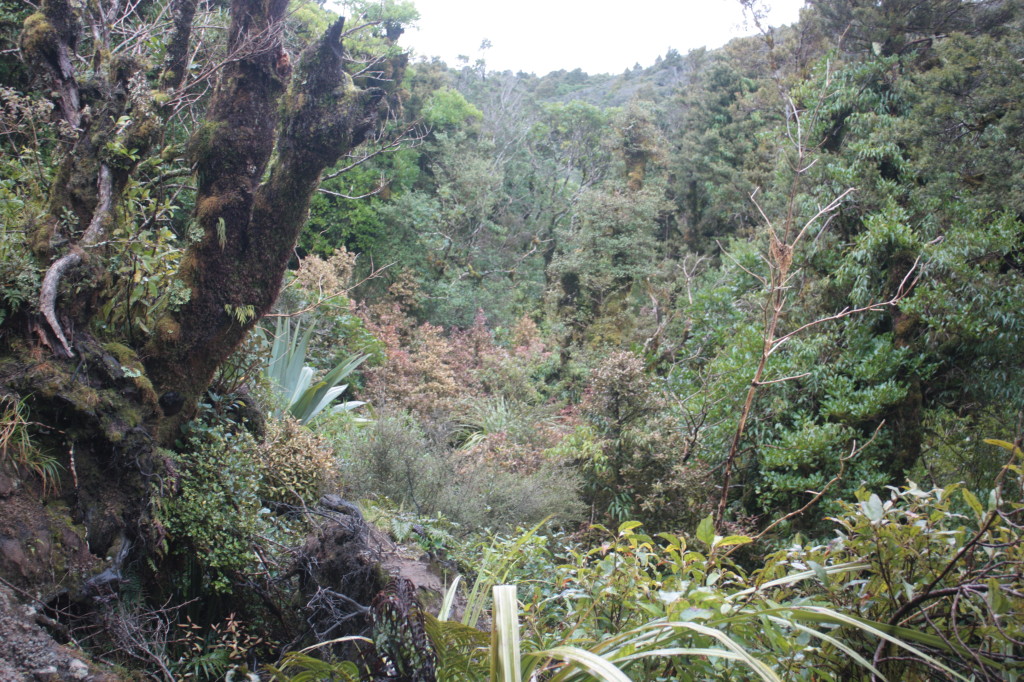 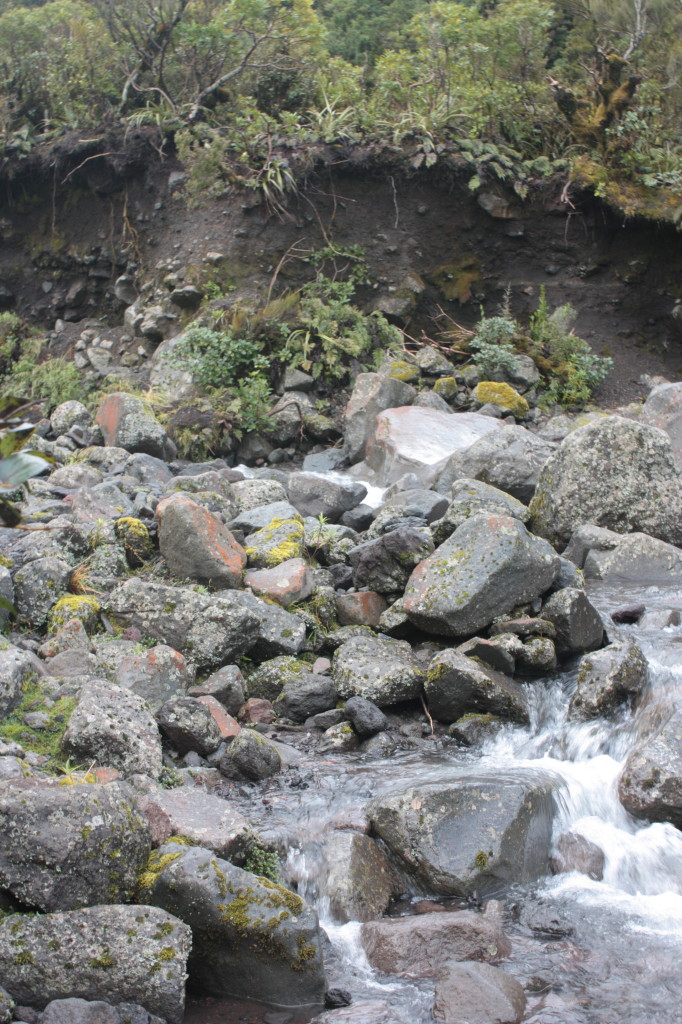 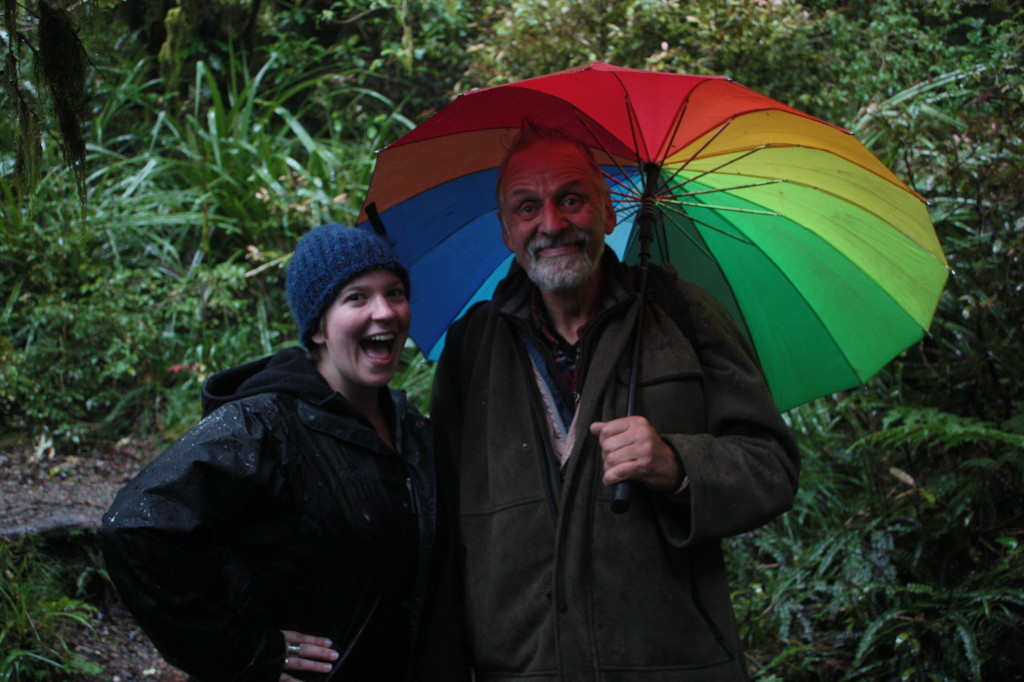 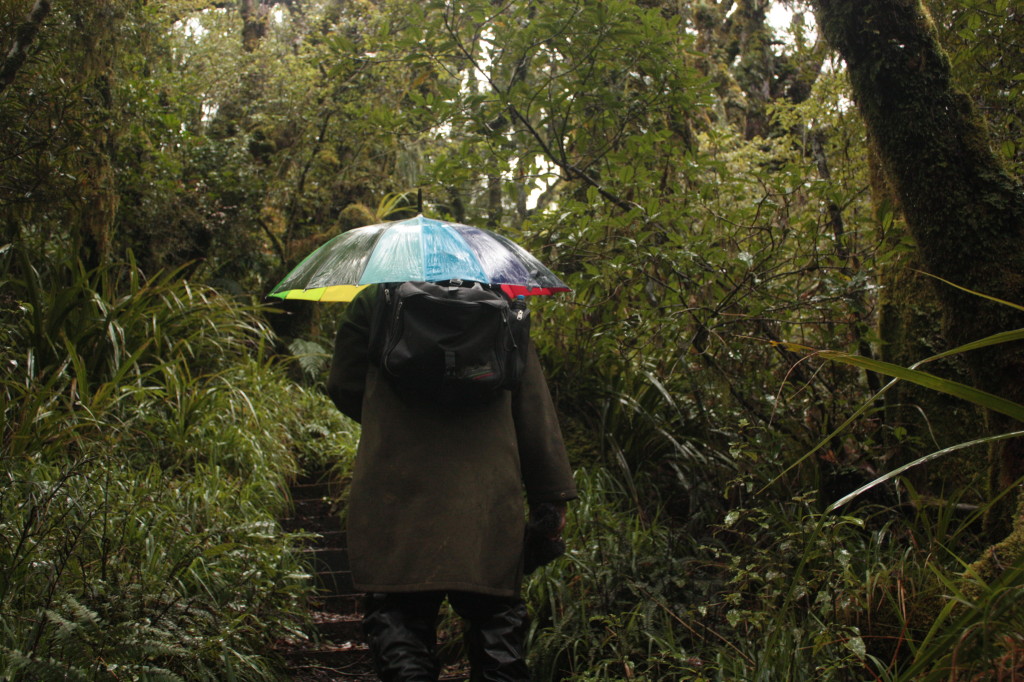 We also went on another hike that afternoon, but unfortunately all the pictures I took are stored on my phone. Let me put it like this: the second hike we did, while it took a considerably shorter amount of time to complete, was a million times more tiring. We basically walked up a bunch of stairs, then walked up the steepest rock face I’ve ever encountered while holding onto a provided chain.

My legs still have not forgiven me for doing both those hikes in a single day.

We also visited the Puke Ariki with Alison and Phil after the second hike (again, all the photos I took are on my phone). We only got the chance to see the first two floors, but what we were able to see was absolutely fabulous. The bottom floor had some amazing Maori inspired artwork, including some gorgeous wardrobe pieces woven from flax, and the top floor had a large sum of antiques and objects from Taranaki’s past.

The following day we started the morning with helping Phil clean up a bit around the house, and also doing some outdoor work. I drove a tractor/cart/thing and almost ran it into a fence. Good times! After that, the three of us piled into his car and went for a little drive around Taranaki.

Our first stop was at the side of the road. Phil pulled over, had us get out of his car, then follow him over a fence. I was a little skeptical at first as to whether or not we should be climbing it, but once we got to the top of the hill I could see why he had brought us there. 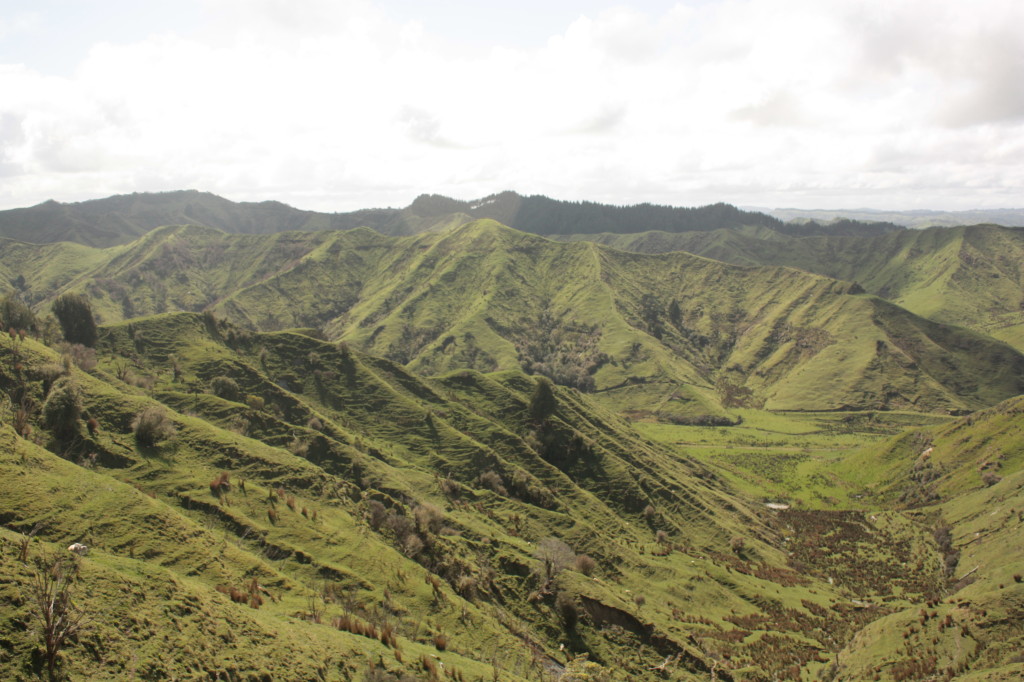 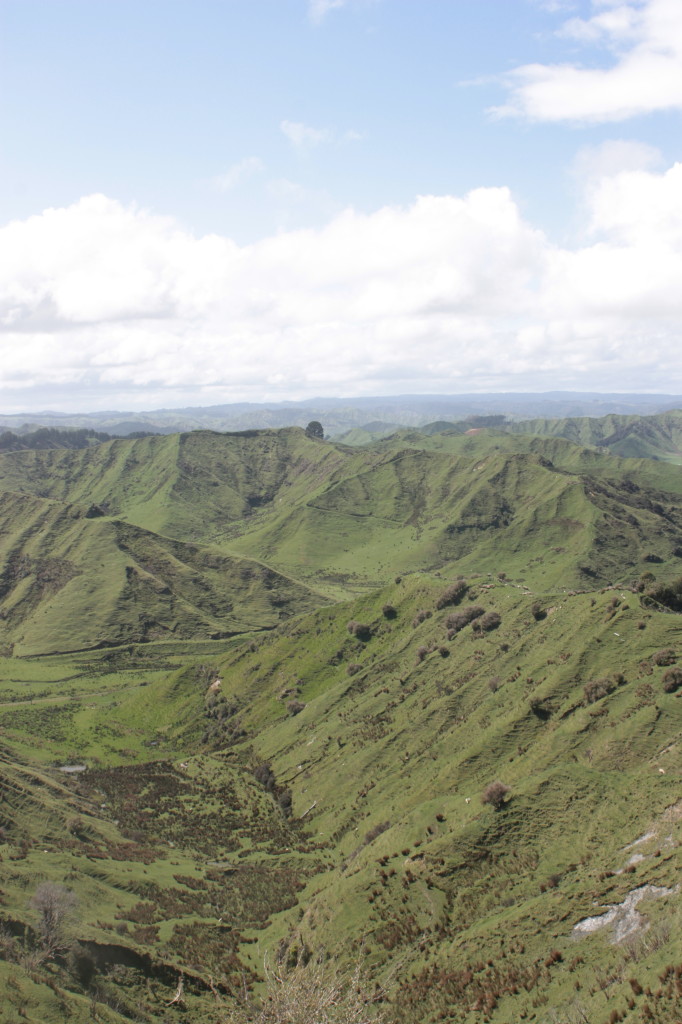 Next we drove to a sort of lodge/bed and breakfast type place. Phil had never been there before, but wanted us to see the beautiful view, so he waltzed right in and introduced himself to the owner of the place. The woman instantly offered us coffee and then showed us around the entire property. (Have I mentioned that Kiwis are the nicest people ever? Cause let me reiterate: SO DAMN NICE.) 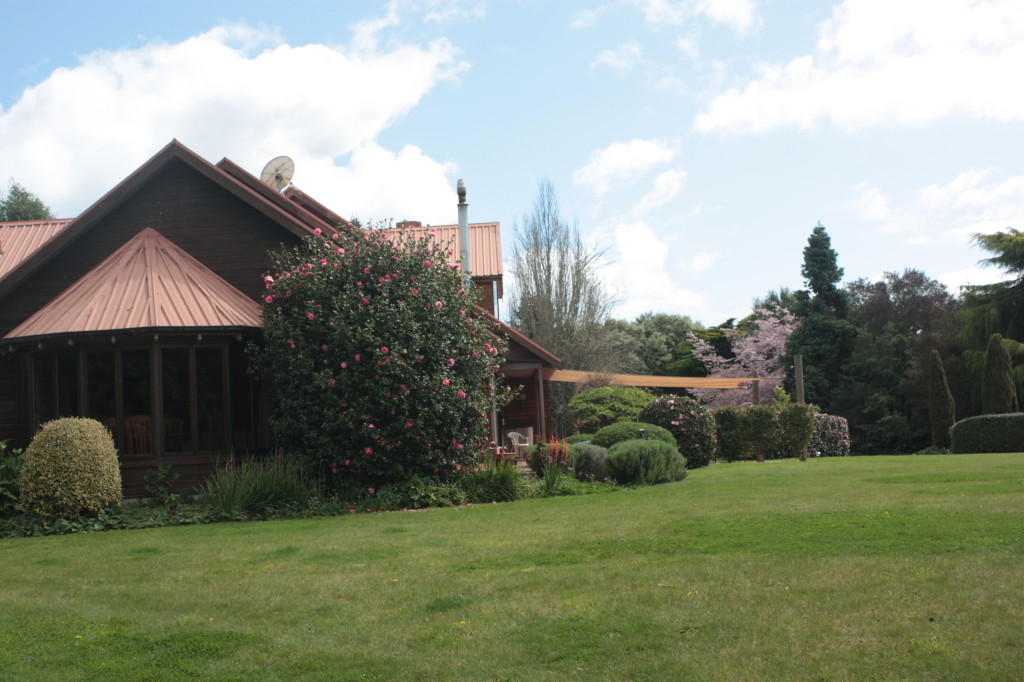 Then we saw some turkeys on the side of the road. Phil and Kathleen attempted to catch said turkeys so we could eat one for dinner. Their efforts were, unfortunately for us but fortunately for the turkeys, unsuccessful. 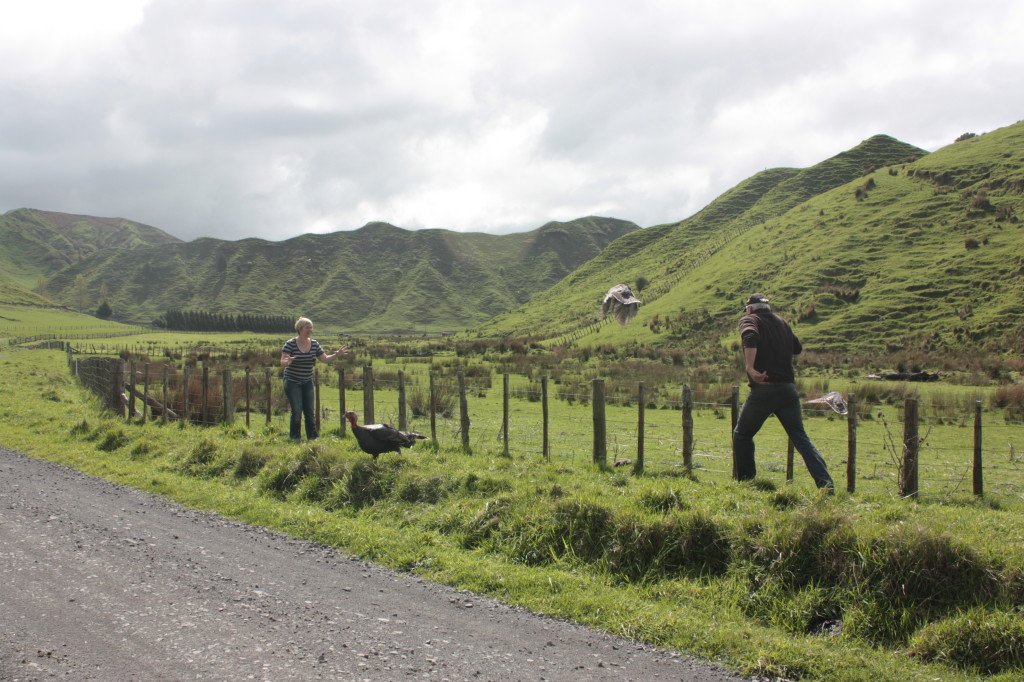 We drove around a bit more, then stopped back by the house for a bit of lunch. After that we were taken to the Tawhiti Museum which was filled with a ton of old tractors and mannequins.

We then proceeded to have some fun with the mannequins. 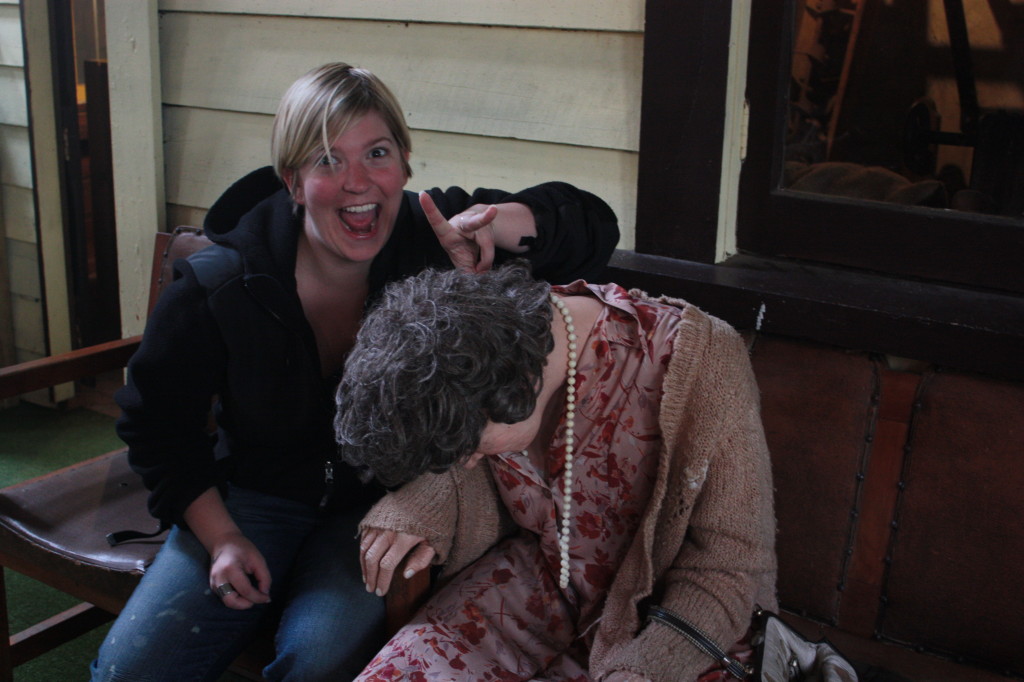 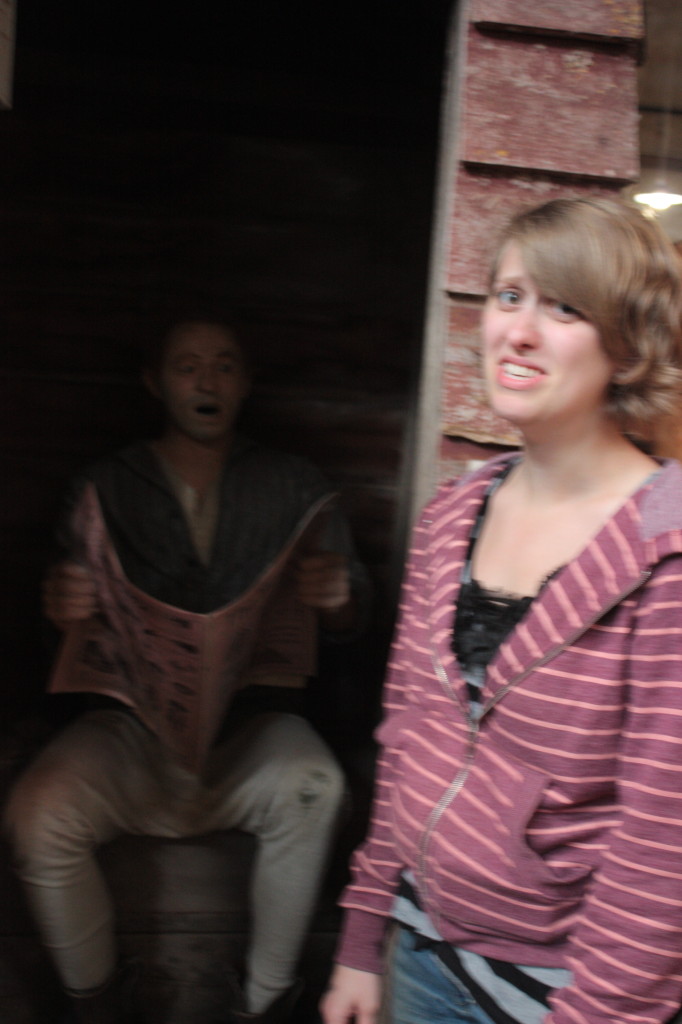 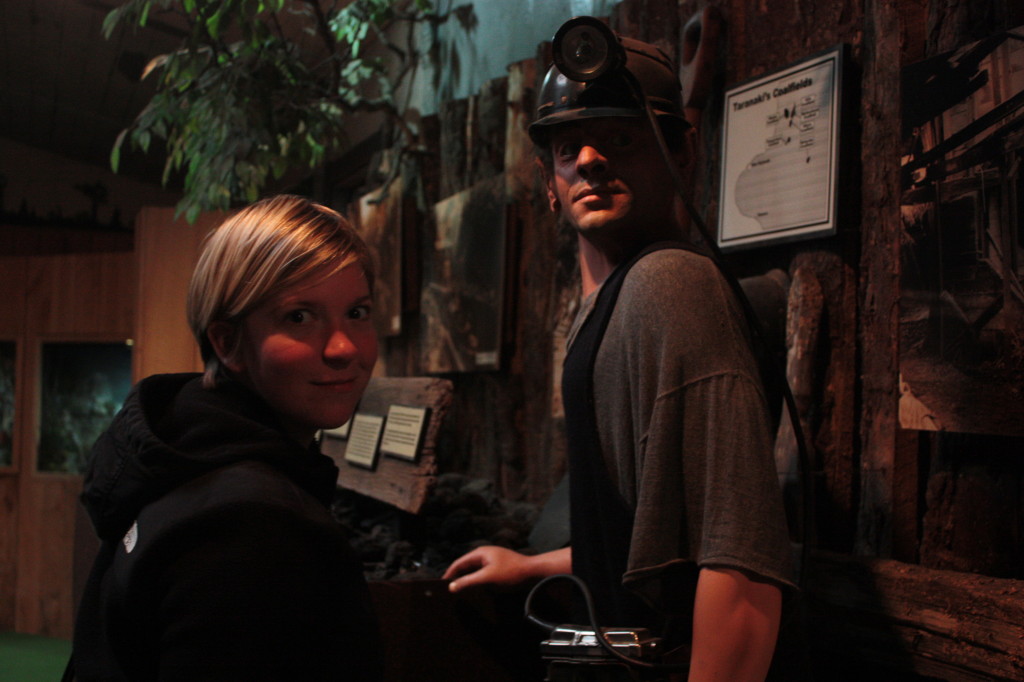 Our final stop of the trip was a dairy farm. Phil was acquainted with the owners and told one of them that he’d like to show us around a bit. 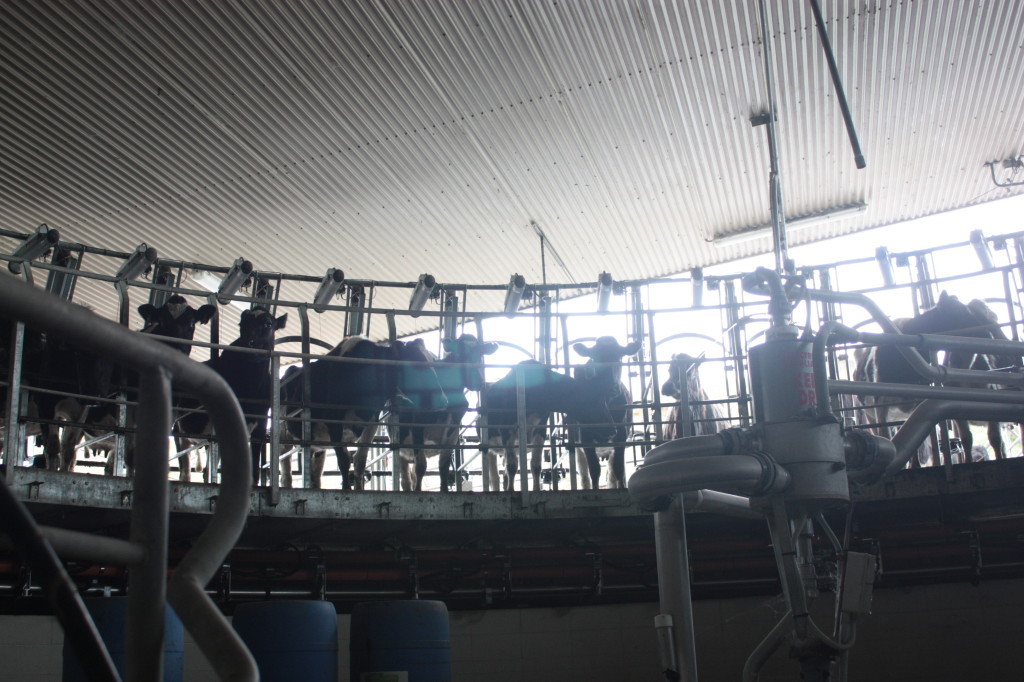 I’ll admit, I’ve never been to a dairy factory, so it was kind of a fascinating process. The cows were basically hooked up to the milking machine and rotated in a giant circle. It didn’t exactly make me want to throw my liberal arts degree away and run off to farm some cows, but I definitely would not mind finding some WWOOF work on a farm or something in the near future. 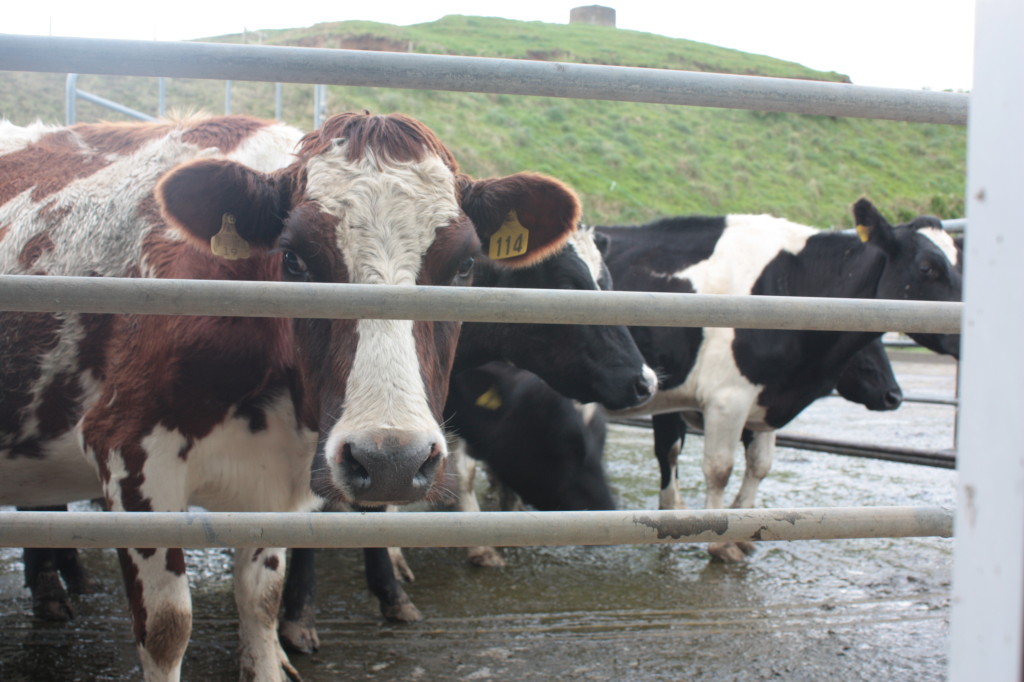 The last thing of the day we did was a night walk. The three of us trudged through a dark hike trail late at night, listening to all the different night life – including Kiwis! Kiwis are rather skittish birds, so the mere fact that we got to hear them conversing with one another is astounding to me.

Also, at some point during our stay we saw three guys on the side of the road wrestling a pig. It was weird and amazing all at once. 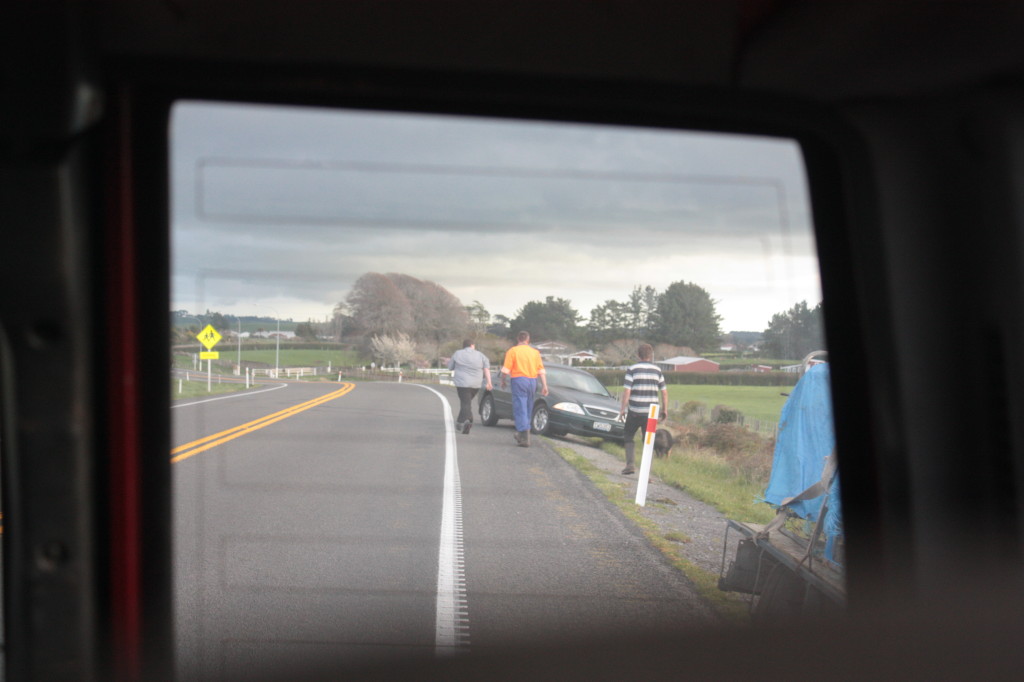 A big, special thanks to Alison and Phil for housing us for three nights and being such wonderful hosts. They told me I was welcome back at any time, and I have a funny feeling they’ll be finding me on their doorstep sometime next January.

Kathleen and I are now in Taupo. We came to Taupo for one specific reason: skydiving. So far two things have happened in Taupo:

We leave Taupo tomorrow for Hamilton and we attempted to rebook our skydive adventure for tomorrow morning, so fingers crossed the weather’s improved by the time we wake up.

As for the circus, it was pretty rad. It was much smaller than the circuses I’ve seen back home and it didn’t have quite the same level of spectacle I’m used to, but it did have a whole lot of heart. There were some funny clown-ish bits, lots of balancing on top of chairs/poles, lots more balancing chairs/poles/pots filled with little children, leaping through rings, etc. etc. The final act involved rigging up this huge figure eight shaped metal structure and watching two guys run on it as it circled through the air. I’ve never seen anything like it in my entire life.

As already mentioned, we head for Hamilton tomorrow. We’re hitting Hobbiton and the Glow Worm caves while we’re there; the two things I think I’ve been most excited for on this trip.

With two months gone, I find myself sad that already a sixth of my journey here has ended, but what a journey it has been so far. Drunken conversations with Irish men about designing airplanes. Mr. Brightside dance parties. Nick Lang as Gollum impressions. Geeking out with Scotty. Lovely, wonderful Carol and her mysterious cake. Walking through the redwoods forest. Partying in Paramata. Helpful bus drivers. Dr. Seuss art galleries. Breaking toilet lids. I could go on.

While I’m sad that two months have already gone, I’m thankful for the ten remaining months I have left. Even though I’m gonna need to get a job soon and settle someplace for a while, I so look forward to heading back out through New Zealand to revisit certain places and see even more new locations. I’m ready for whatever comes my way. 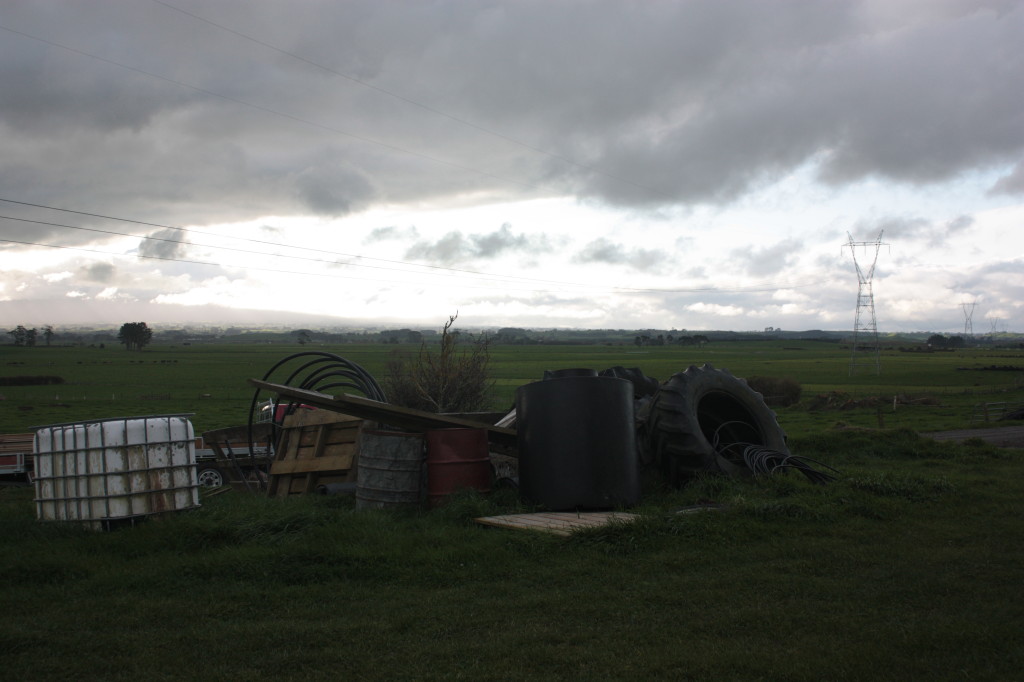 2 thoughts on “Wednesday: Our Stay in Stratford.”