So it’s been a while, and I figured I’d update on some of the writing-oriented stuff that’s been going on in my life. I mean, there’s nothing much else of interest going on, so why not?

…Okay, that’s not entirely true. I’ve got cool friends, a cool boyfriend, and I just traveled down to the Bay Area for the first time ever – wherein I went to Oakland, San Francisco, and San Luis Obispo. I’m also moving out of my house and in with Stephen and his roommates at the start of July, which will be wonderful.

San Fran is beautiful, but those hills are killer.

END_OF_DOCUMENT_TOKEN_TO_BE_REPLACED

One day I’ll figure out what to use this blog for.

Using this blog was easy for the first year. There was a purpose: a catalog for my excursions. I had pictures, information, stories, y’know.

I keep slipping away from this blog, but it still lingers in the back of my mind; a persistent itch. It no longer befits a diary of my adventures, as I’m currently not on any adventures, but I want it to be used for something. On the one hand, I feel like life’s at a standstill; so utterly dull, filled with nothing but work, television, and sleep. On the other hand, I feel like my writing’s growing stronger everyday, I’m in love and it’s absurdly wonderful, and I’m making so many amazing friends. It’s a strange period of my life.

Despite feeling like everything’s at a standstill, I have done things since my last entry, especially in the poetry department. I traveled to Olympia and Spokane where I took second and first place (respectively) at their slams. I took first place, and a cash prize, at a Valentine’s Day slam that happened here in Portland. I went to Albuquerque for the Women of the World Poetry Slam, where I didn’t compete but still had an eye opening experience and a huge journey of self discovery as to my goals as a poet (I meant to write a longer entry about my time there, in fact, so maybe that’ll be a thing…). Most recently, Stephen and I traveled to Boise for my first ever co-feature, where I was paid to do poetry at the Boise Final Grand Slam.

Hopefully I’ll have some idea where to take this blog soon. For now, I hope you enjoy my poetry. 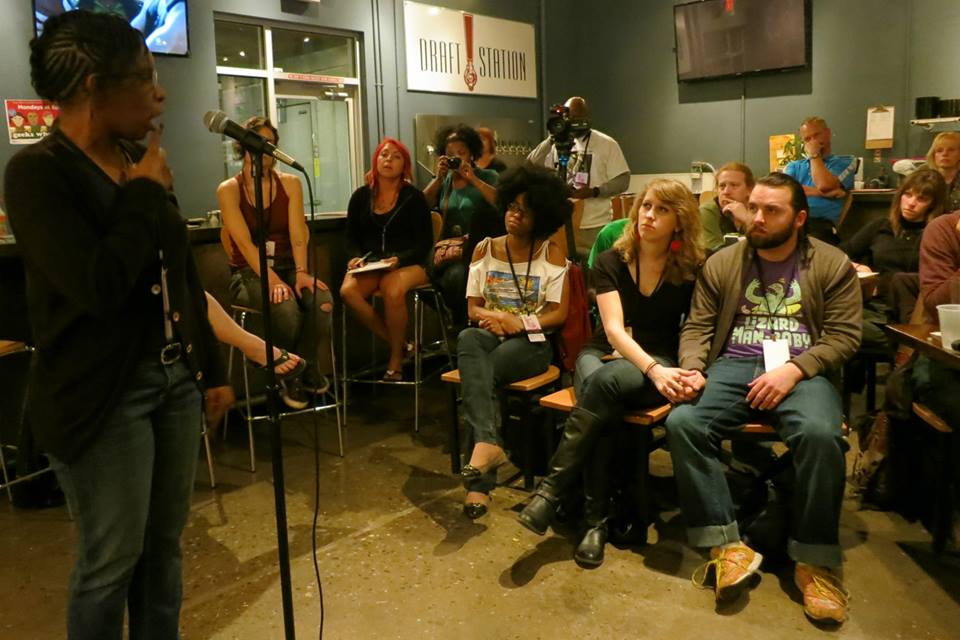 Stephen and I watching some great poetry at WOWPS in Albuquerque.

END_OF_DOCUMENT_TOKEN_TO_BE_REPLACED

Well guys, we’re down to the wire. Six days until take off.

Subtly taking pictures of myself in the Woodstock library. Classy.

Today I initially planned on writing about why I chose to travel to New Zealand for a year, until I realized that I had pretty much covered that in my entry last Wednesday. Whoops. Got a bit ahead of myself there.

I then contemplated writing about the process of getting ready for New Zealand, or maybe what I’ve been up to since I got back to Portland. None of that really seemed interesting to me though. Oh being back in Portland has been fun, what with LeakyCon and garage sales and catching up with friends, but I figured it’s not of much interest to anyone but myself. As for prepping for this trip, well, I might write something along those lines later on, but I’ll probably wait until I’ve actually done a bit of traveling first. I also don’t really have anything of interest to contemplatively write about today. I’m actually pretty brain dead at the moment. I just emailed my college adviser the final draft of my Theatre Arts capstone, ie. the last college paper I ever have to write. While I’m overjoyed, I am also exhausted. I’d take an impromptu nap right now except, y’know, doing so in a public library filled with children probably wouldn’t be the best idea.

This is a series of poems I’ve been working on since the start of the year. The title of each poem represents how many more months I have left to go until I leave for New Zealand. Each one reflects what was happening in my life during the time I wrote it, as well as what was going on in my mind in relation to this upcoming trip. They’re not my best work, but I still like how most of them turned out. I hope you do as well.

I realize poetry isn’t the most interesting thing to share on a blog mostly dedicated to travels, but writing poetry has become such a big part of my life over the last couple years that it was bound to happen at some point anyway. Might as well make it now.