Hey. Remember when I said at the start of the year that I was gonna write more blog entries and be more involved with people about what I’ve been up to in New Zealand and be more responsible for what I write?

To be fair, not much has happened this the start of the year. I mean, yes, things have happened. Relationships have changed. Friends have been gained and lost. Work’s been going on. I met two Hobbit actors. I caught up on The Walking Dead. I’m officially starting a podcast. Of course things have happened. But nothing to write home about, y’know? I just haven’t felt compelled to write a blog entry in a long while. (Well, except maybe about the Hobbit actors.)

To make up for my absence, I come bearing tales of new adventures and photographs galore! Let me tell you about the week Beckah came to visit! 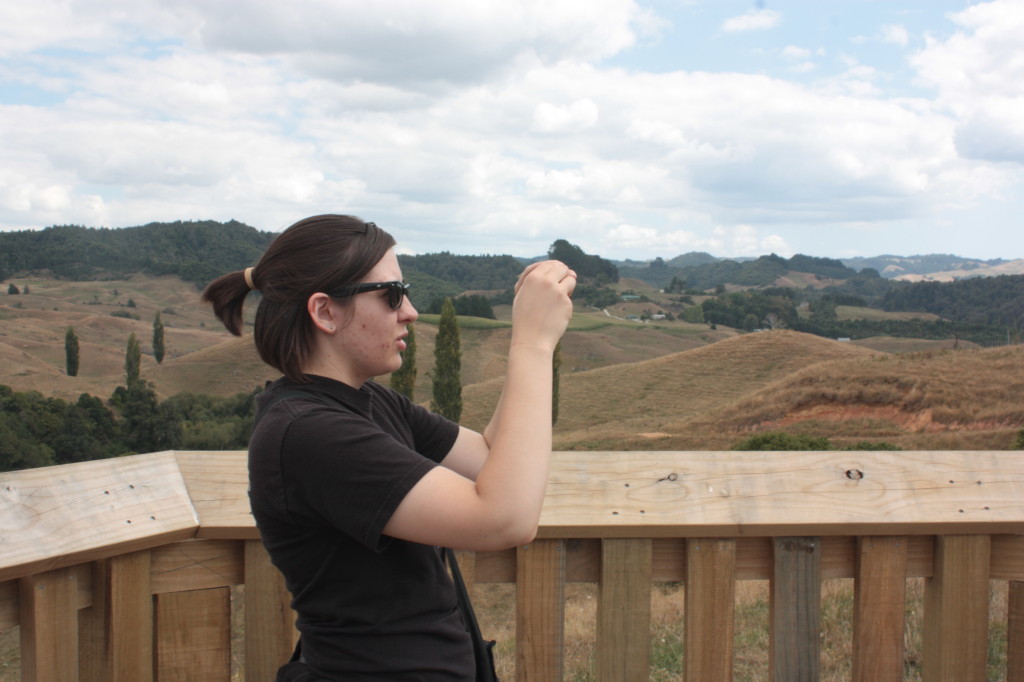 And this one crazy-awesome chick.

END_OF_DOCUMENT_TOKEN_TO_BE_REPLACED

Yesterday I did something I swore I’d never do; something that was never in the stars for me.

I’m not a huge fan of heights. I mean, as long as I’m securely fastened into a high up object (airplane, roller coaster, etc.) I’m usually all right, but I can’t look over the edge of a building or climb really high up trees because I know there’s nothing tethering me to safety. Hence why I never thought I’d skydive. I mean, what’s scarier than falling several thousand feet in the air towards the ground? Absolutely nothing.

But Kathleen suggested it a couple months back, during the initial planning portion of our trip, and for some reason I had agreed to it. Yeah, I had thought, Why not? If I’m in New Zealand, a place known for it’s extreme sports, why shouldn’t I jump? So we did some research, decided skydiving in Taupo would be the best, and that was that. I then proceeded to bury the idea of jumping out of a plane in the back of my mind. My way of coping, y’know?

We got into Taupo last Monday and still I wasn’t nervous. I continued to not be nervous because, the following day, we learned skydiving was off. The weather was just not working with us. So we rescheduled for the next morning and, as already mentioned in my previous blog, we went to the circus instead – which was pretty damn rad.

The next morning the weather looked similar, ie. too shitty to skydive. Despite kind of being disappointed that the main reason we came to Taupo was all for naught, I was kind of okay with it at the time. Partially because jumping out of a plane is terrifying, but also because money is slowly becoming more and more tight. I was okay with not spending $400+ on the potential of dying.

Then we got a call saying that skydiving was a go.

Kathleen and I loaded into a shuttle with two Asian girls, an English girl, a Candian girl, a German guy, and one excited Kiwi skydiver driving the car. I was silent most of the way to the skydiving place, seeing as I had read over the contract we had to sign and the terms had included the words “possible injury or death.” Honestly, I spent most of the ride thinking to myself, This is it. This is how I am going to die.

And yet, I went through with it. There were several instances where I thought about chickening out, but for some reason I never did. Maybe it was because Tim, my awesome tandem partner, had been skydiving for fourteen years and he seemed very much alive. Or perhaps because everyone working there seemed so enthusiastic. Or because I didn’t want to embarrass myself by going “No, sorry, I can’t do this.” Pride isn’t much of a deal for me usually, but sometimes my stubbornness can get in the way.

Our “holy shit we’re about to skydive” faces.

Eventually I was loaded into the plane, donning a red jumpsuit, a cap, and goggles. As I watched as the plane rise off the ground, I knew the only way back to the ground was by jumping.

I watched Tim’s altitude watch as we climbed higher and higher in the air. I watched as we passed the halfway point, and eventually the 10,000 feet mark. I was oddly calm, I realized. It was just all so surreal, y’know? I kept looking out the window and thinking, Nah. There’s no way I’m gonna jump. That’s not possible. That isn’t a thing. It’s all good. I guess denial is one of my stronger defense mechanisms. It also helped that my camera guy and Kathleen’s camera guys were sitting right next to me, and both of them kept goofing around with each other and with me. I think they knew how nervous I was, and they did a marvelous job keeping me distracted.

Then suddenly my camera guy was opening the airplane door and I realized what was gonna happen next.

I was the first jumper. Kathleen and the other two girls in our plane were gonna go up to 15,000 feet, but I had opted for 12,000 because of money (I only saved $70, but that’s three nights in a hostel versus fifteen extra seconds of free fall, so I think I made a wise decision). On the one hand, going first was probably the better option. I didn’t have to sit at the back, watching everyone else go before me, worrying my pants off about my fate.

Even so, in that moment, I became fucking terrified.

I was tethered to Tim now, and he shifted me towards the door. He had instructed me to hold onto my harness, and to bend my head and legs back once were on the edge of the plane. I, of course, made the horrible life decision of looking down once my legs began to dangle. I’m pretty sure I’ve never said the word “fuck” as much as I did in that instant.

Tim had be look back at the camera set up to take my exit photo, but it barely even registered with me. It felt like I was sitting there for an eternity, my heart pounding through my chest. Why weren’t we jumping? Why were we just sitting there? Fuck, fuck, fuck, what am I doing? I thought. Maybe it’s not too late. Maybe I can get out of this. Maybe I –

And then we were falling.

I’ve never screamed the way I did in those first ten seconds. I felt like one of the passengers falling out of the plane in Iron Man 3. We fell head first, and I watched (briefly, though it didn’t feel that way) as the plane grew further and further away. I screamed and screamed and screamed. In the words of the Bluth family, I made a huge mistake.

Then suddenly Tim turned me over, and all I saw was the ground. The rapidly approaching ground. If you watch the video below, you’ll notice for the first four or five seconds I am just staring at the ground, screaming. Mainly profanity, really, but also just screaming. But then there’s a shift. Here, watch the video and you’ll see what I mean:

Skydiving like nothing I have ever experienced and I don’t know how to even put it in words – which I realize is a cliche to say, but I mean, it’s really true. Nothing can match those first couple seconds; it’s like you left your stomach up on the plane and your heart is trying to escape from your chest. But then you feel like… like you’re flying. It’s just the most surreal thing I’ve ever gone through. It was just impossible to believe it’s actually happening. The change from terrified to amazingly enthusiastic happened so fast for me. That huge grin you see on my face in the video is legit. It occurred to me quickly that I was gonna be okay. Tim knew what he was doing and my camera guy was also there and – dear god – I was twelve thousand feet in the air and it was goddamn amazing. You can barely catch your breath while it’s happening, and it goes by so fast but at the same time everything feels like it’s happening in slow motion. It was fucking incredible.

Once the parachute was pulled, it took about six or seven minutes to get back to the ground. Tim flew us in rapid circles at one point, which was great, and the views were breathtakingly spectacular.

Skydiving was something I never anticipated enjoying, but holy Henson did I ever. I’d love the opprotunity to do it again, if I’m ever at the point where I can afford it again. It’s a feeling I think everyone should experience.

That feeling where you feel so very mortal but so very invincible all at once.

A feeling that cannot be beat.