When we last left our heroes, Kathleen and Julia were anxiously waiting to board their flight to New Zealand. Thirteen cheddar cheese packets. four Milano cookies, and six hours later, the girls headed to their gate.

We did have a bit of a scare at this point. Y’see, Kathleen didn’t print out her holiday-work visa prior to our travels, but both of us had figured this would be okay because we assumed our visas were electronically connected to our passports. Makes sense, right? However, some guy working at the San Fransisco airport, who from this point on will be referred to as Liarface McGee, told us that there was a very likely chance Kathleen could be sent back to the USA due to not having a physical copy of her visa. Thinking Liarface McGee was accurate in saying this, we were put in a bit of a panic. We did our best to gather up all her necessary information, even signing onto her visa account on my phone and screenshoting her visa just in case. After doing all we could, we boarded the plane, praying to the universe that she would be allowed into the country. (Spoiler alert: she was allowed into the country)

Still a little shaken by this (totally false) information from Liarface McGee – Kathleen worrying about being sent home prematurely while I freaked out about the thought of being in New Zealand on my own – we boarded our flight. 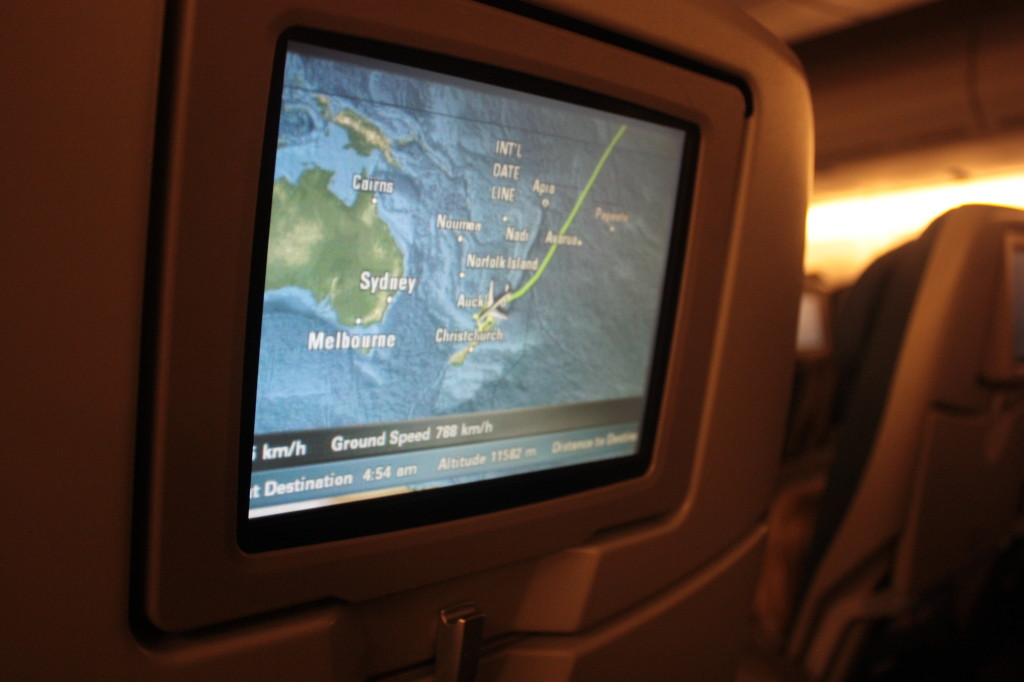 Despite that this was a twelve and a half hour flight, it went fairly smoothly. The food was decent, I got to watch Seven Psychopaths and Louis CK’s Oh My God, and I managed to catch a couple hours of shut eye. The turbulence wasn’t awful, but there definitely was a point during it where I remembered the person who flew out of their seat and hit the ceiling on LOST, making me immediately buckle my seat belt.

Best of all, Kathleen and I met a woman named Alison who had the window seat next to us. She was a really sweet New Zealand native from New Plymoth. She told us about her family and how she had just traveled to America for her son’s wedding. She gave us some advice on traveling around New Zealand, and even coached us a bit on New Zealand slang (Kia ora, sweet-as, shot, etc.). By the end of the long flight, we had exchanged contact information and she had offered us a place to stay in September. Here’s hoping we’ll make it out to see her! 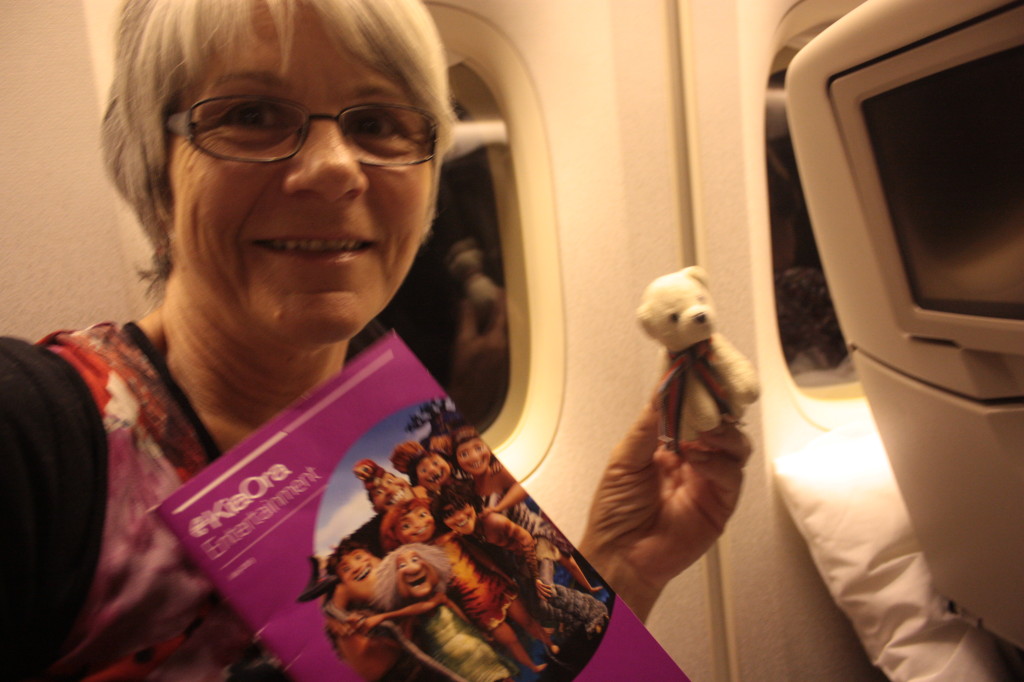 As we were descending on Auckland, I stared out the window, biting down on my thumb. There it was. The place I had dreamed about visiting for over half a year. From the sky it looked just like any other city, but I knew that it wasn’t. That’s when it really hit me; the moment I fully realized I was here to stay for an entire year. The realization was heavy, but I was too excited for it to knock me down just yet.

When the plane finally landed, the two of us made our way to customs (we walked with Alison for a bit, but lost her when she stopped to buy her husband a bottle of whiskey from the Duty Free shop). We both got called up together in the customs line, and after the guy began asking us about our travels, which led into a brief discussion of high school and work, it became abundantly clear that no one was going to be sending Kathleen home. The second I realized he wasn’t going to ask for our physical visas, I slowly retracted my own visa off the counter and out of the man’s line of vision. No need to bring attention to the matter.

After he stamped our passports, we walked on through, gripping each other with ridiculous grins on our faces. We had done it! We were in! 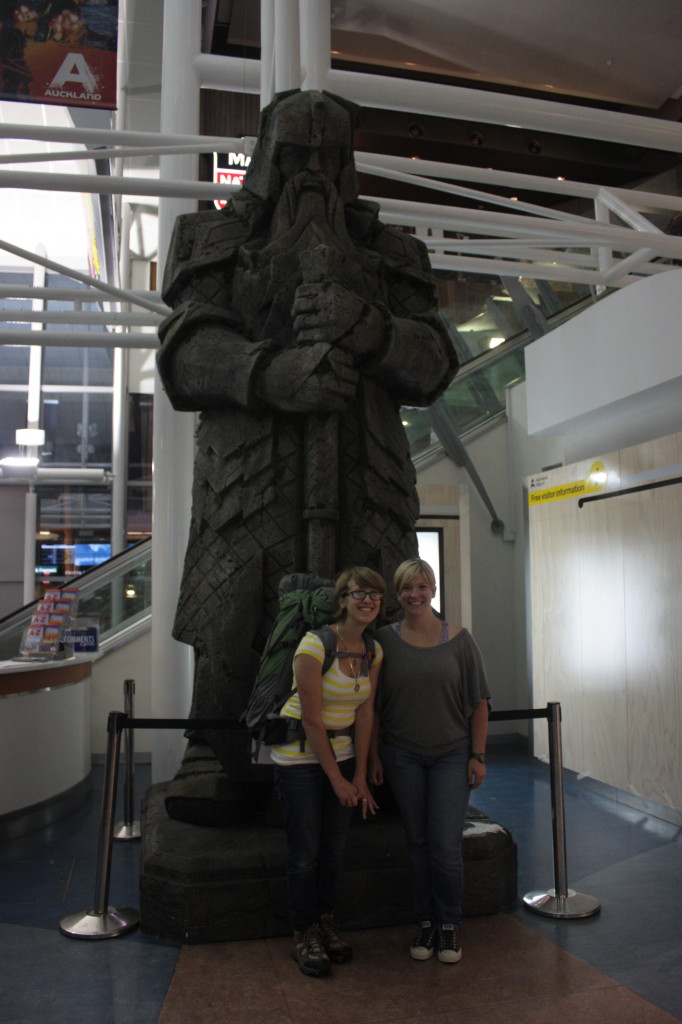 I find it very fitting that there was a giant dwarf in the NZ airport.

We basically spent the entire bus ride freaking out about the fact that we were in NZ, still wearing those ridiculous grins of ours. I was in a bit of a daze as I watched Auckland go by. The building’s architecture was so different! The weather so similar to Portland’s! And damn was that grass green! 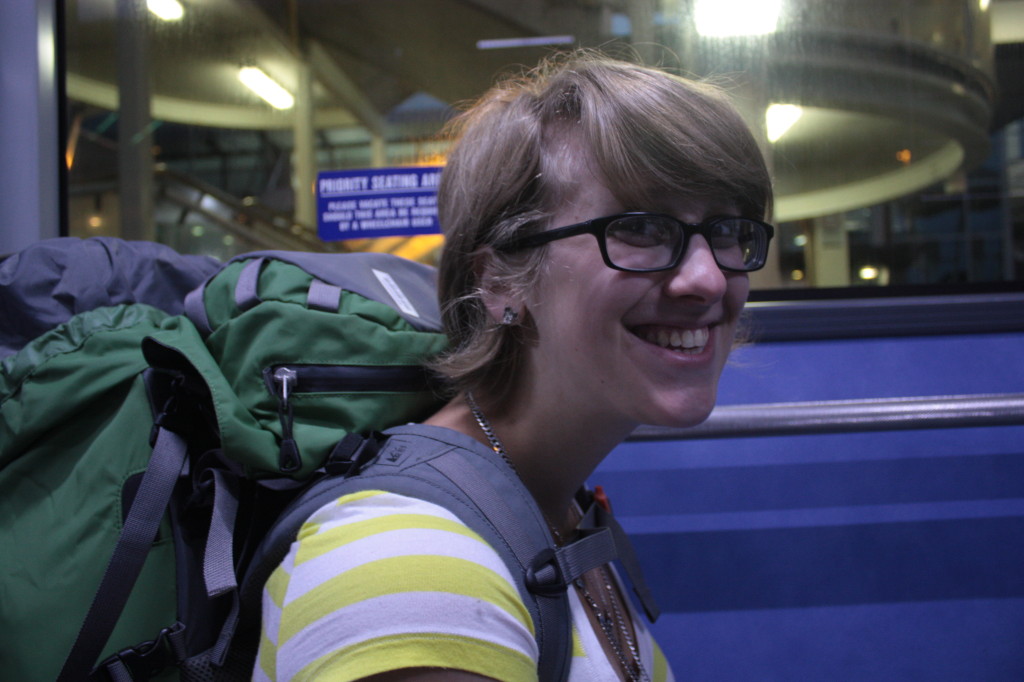 My “so tired but so happy to be here” face.

We went to our hostel to sign up for the YHA memberships and to drop off our bags. Check in time wasn’t until 2pm and we arrived at about 8am. We decided to walk around and get acquainted with the city. But first? COFFEE.

We ended up in a Starbucks because: A) it was the first coffee place we could find, B) we knew they had free wifi there, and C) okay, whatever, I love Starbucks, shut up, don’t judge me. 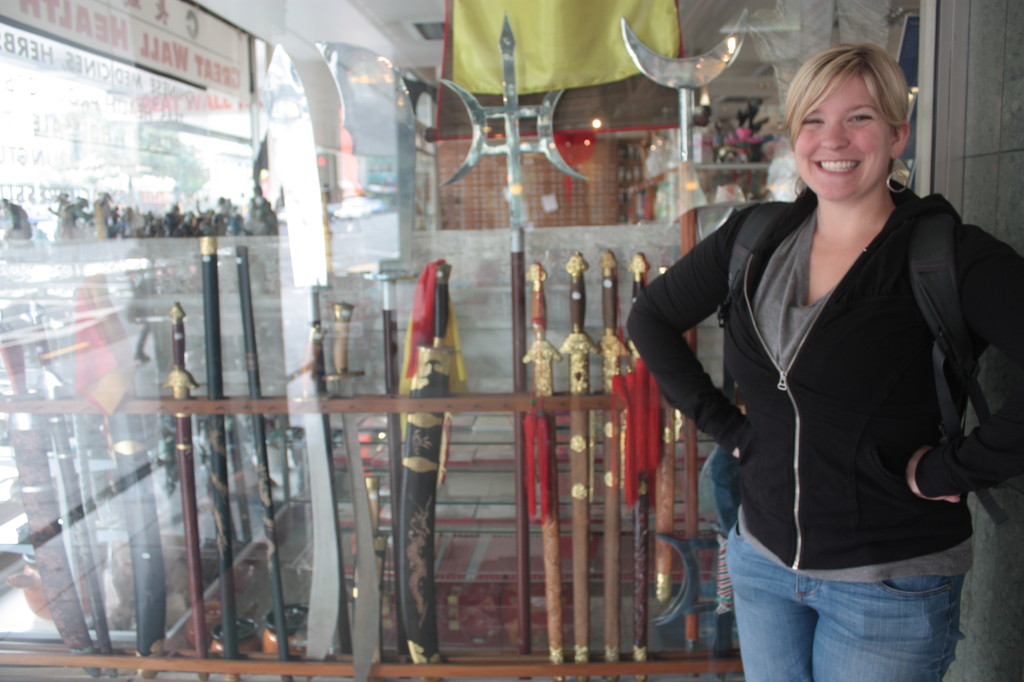 This was right next door to the Starbucks cause, y’know, you can never have too many katanas.

We walked around for a good long while, mainly getting to know Queens Street and going to an office to get signed up for WWOOFing. We also (sort of) took a look at the Auckland University campus and found a nifty little park. On our way back to the hostel we had lunch and grabbed a microwavable soup bowl for dinner. After all that, we headed to the hostel to finally check in.

Keep in mind, Kathleen and I had been traveling for a long time. A REALLY long time. We’re talking getting up at seven in the morning Portland time and landing in Auckland at 5:30am. Factoring in the time change, that’s more than twenty-four hours of travel right there and we were only running on a few hours of airplane-sleep. Needless to say, we were exhausted by this point. I remember Kathleen saying, “Wow, it’s only twelve o’clock,” and I burst out laughing because I had thought it was 4:00pm. The whole day went by so slowly, especially seeing as after we were able to check in we pretty much just hung around our hostel room the rest of the day. We were just so physically and mentally tired. Considering the amount of time/distance we traveled and how much of the city we’d already seen in that first day, I think we were granted a little leeway in just lying around and being lazy bums.

(Wait, but I totally did manage to go on a fifteen minute run, part of which involved running up/down the fucking steepest hill I have ever encountered, so props to me for that.)

After a night of basically using a lot of our free wifi, watching The Daily Show, and doing diddly squat all night, we passed out at 9pm.

Day two was a bit more productive. We got an early start in our day and headed down to the wharfs. We sort of just wandered around, observing all the boats and buildings (and seagulls). 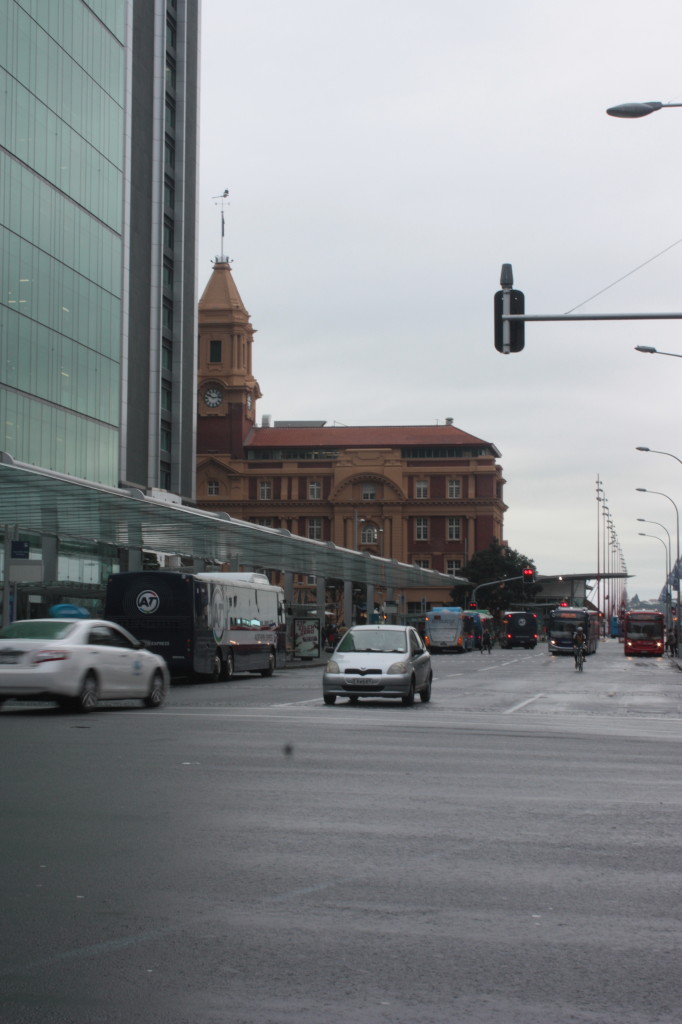 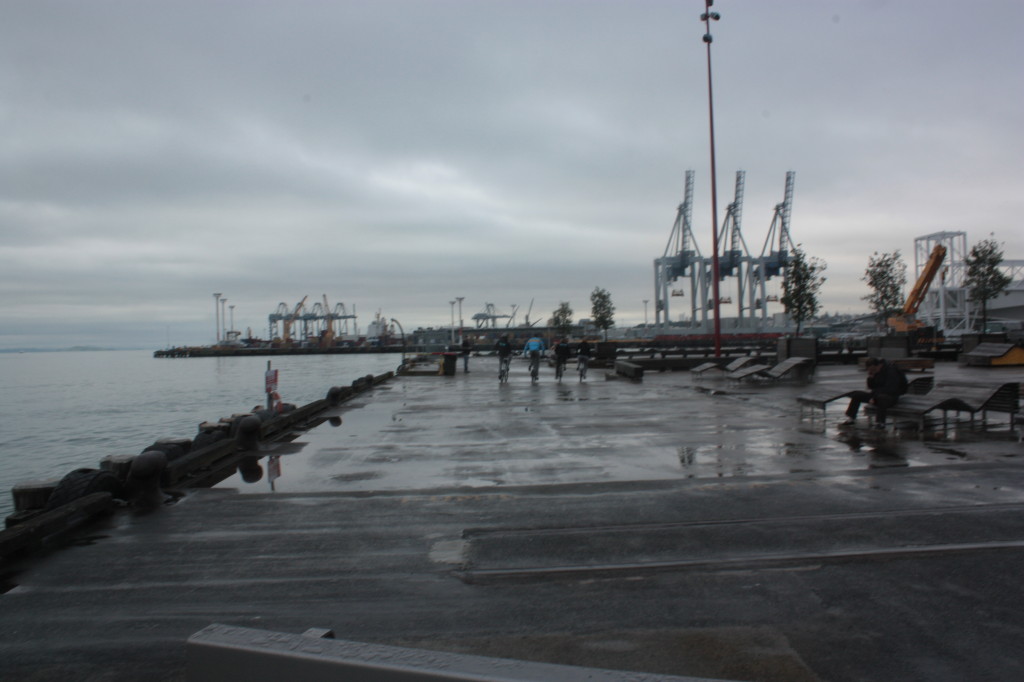 We also stopped at a Kathmandu to get Kathleen new boots and Mrs. Higgins for the most delicious cookies I will probably ever encounter in my lifetime. 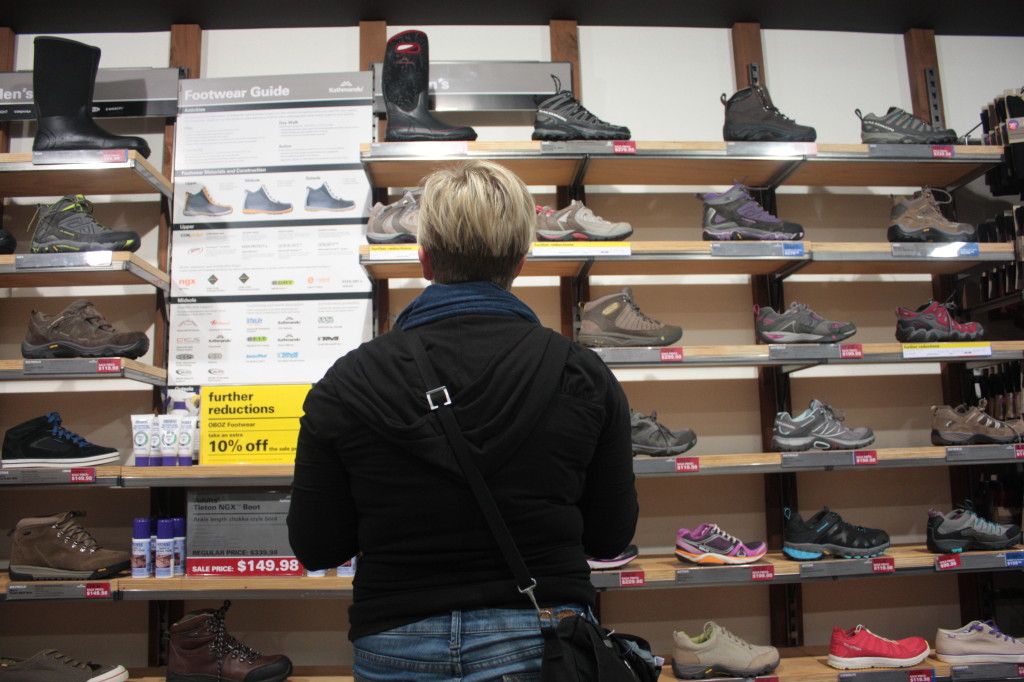 After going back to the hostel for some TLC and lunch, we walked over to the Domain, which is essentially a humongous park/garden/field/museum/oh my god there is so much there. It was all just really beautiful and a lot of fun to take in. Lots of communing with nature to be had. 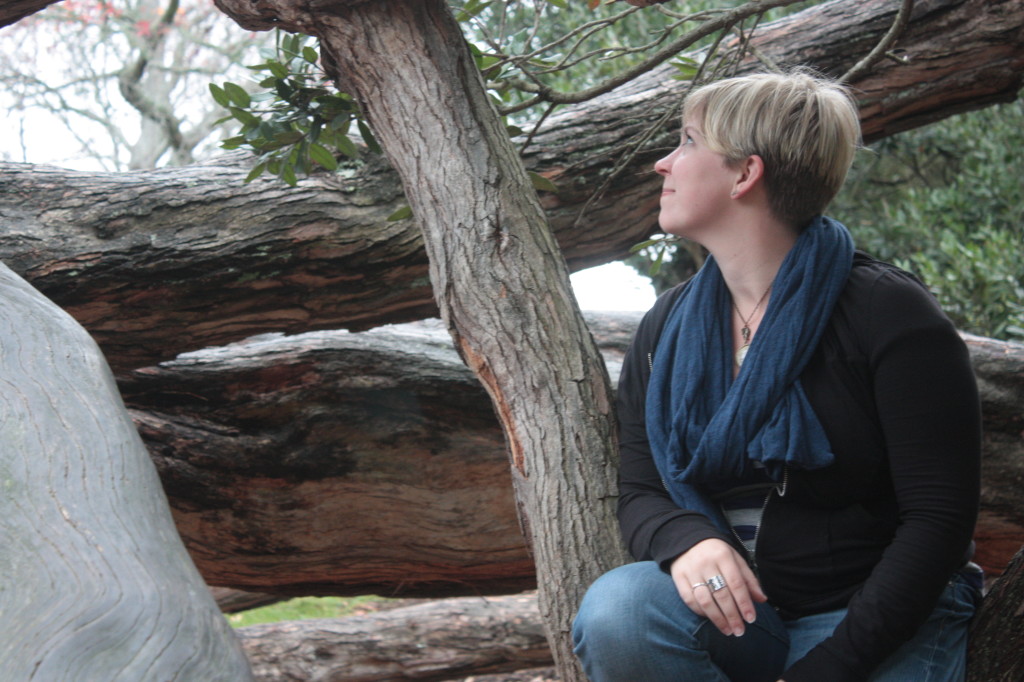 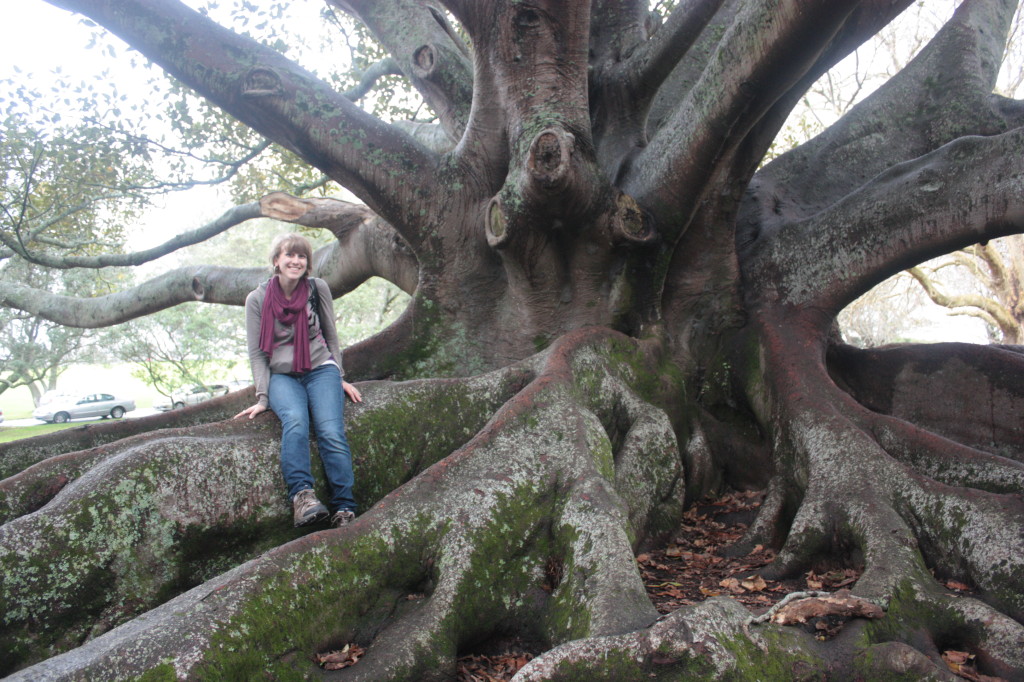 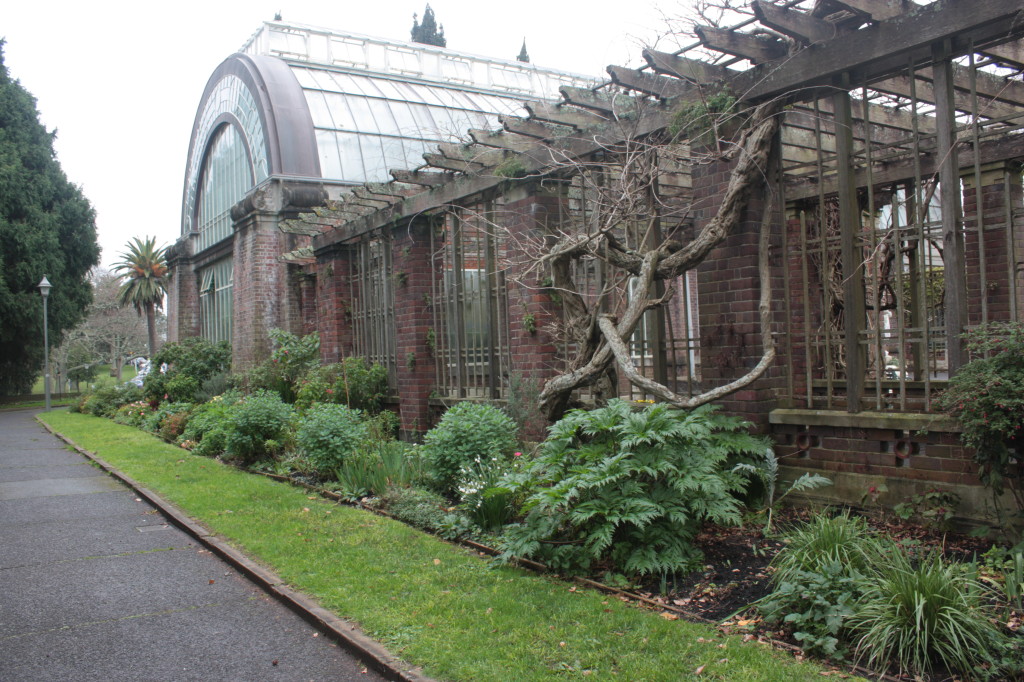 I kept waiting for Poison Ivy to make her grand entrance. 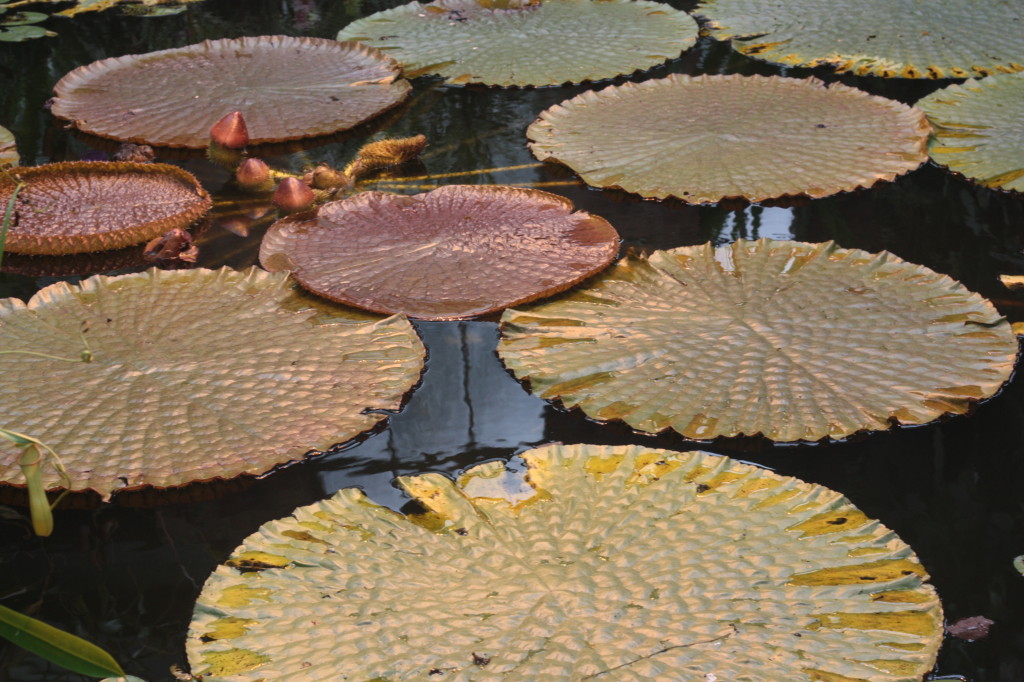 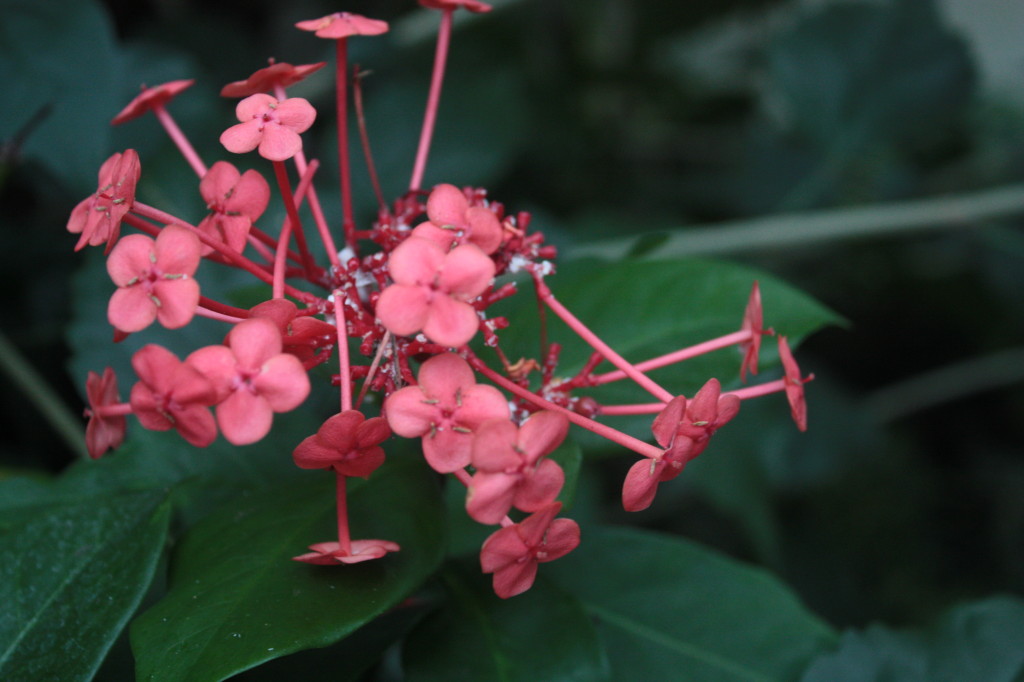 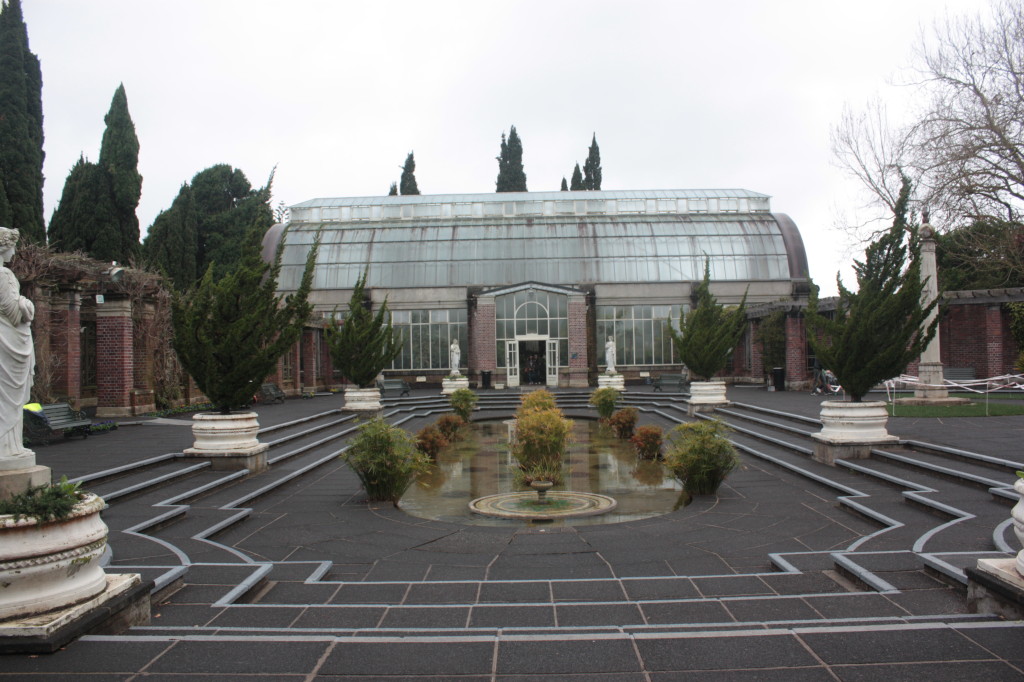 Seriously though, where was my Poison Ivy boss level?

And they had a Fernery. Called Fernz Fernery – founded by the Fernz Company. Did you know that a Fernery was a thing. Well you do now. YOU’RE WELCOME. 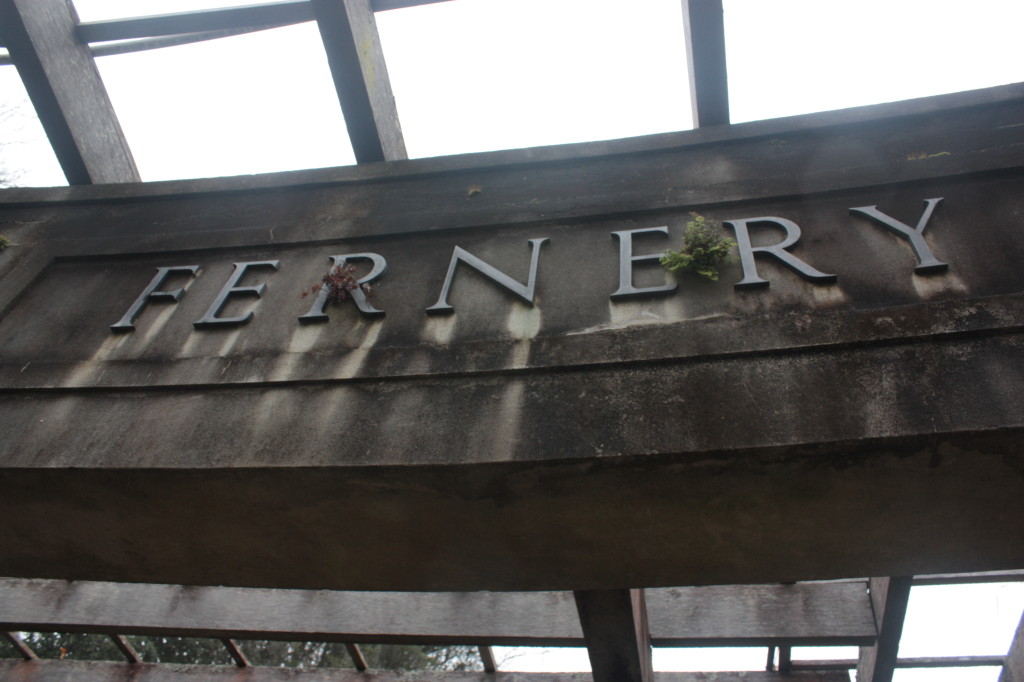 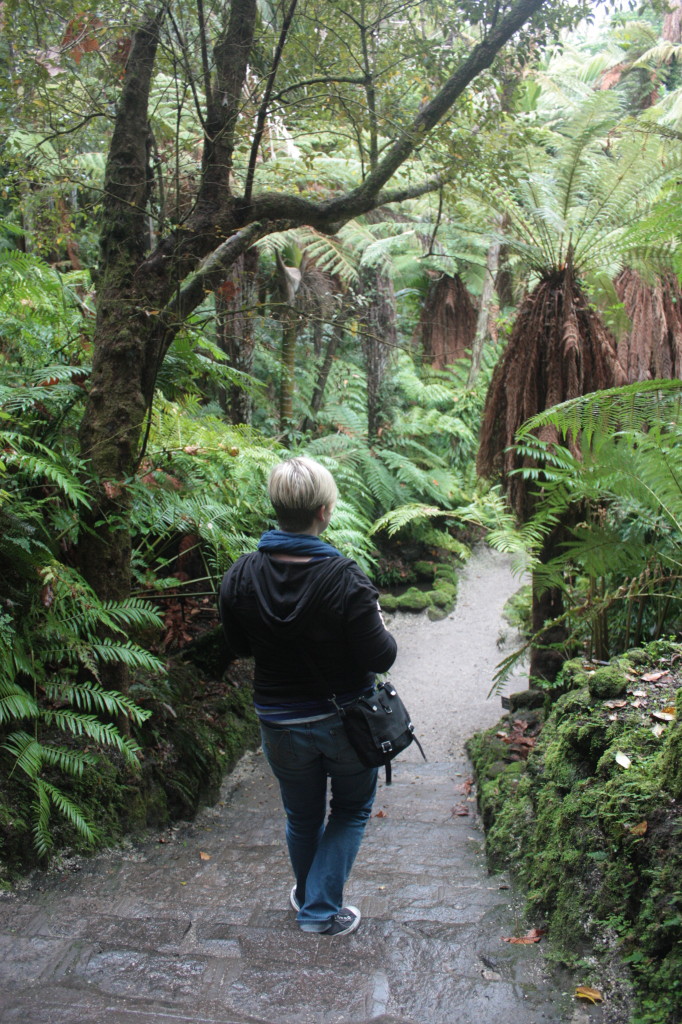 Next we headed to Parnell street, which is a quaint little area with cute, chic shops – all of which out of our price range. Sarah, our pal who studied abroad in Auckland, recommended we check out a Chocolate Boutique in the Parnell area, and so we did. 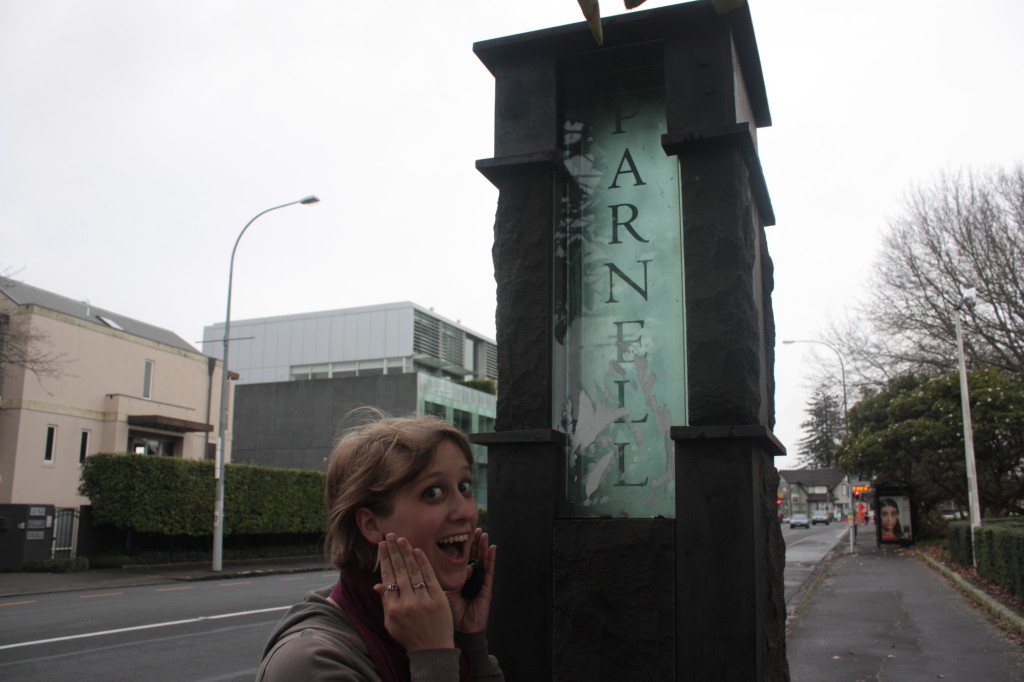 The chocolate there looked crazy delicious but was crazy expensive, so we ended up buying one decently-sized bar of chocolate to split (half of which has already been devoured). We then walked through some awesome pathways in the Domain before heading back to the hostel.

We thusly ended our day with pizza and hanging out in our hostel bedroom.

Here are some random highlights/realizations of the trip thus far: 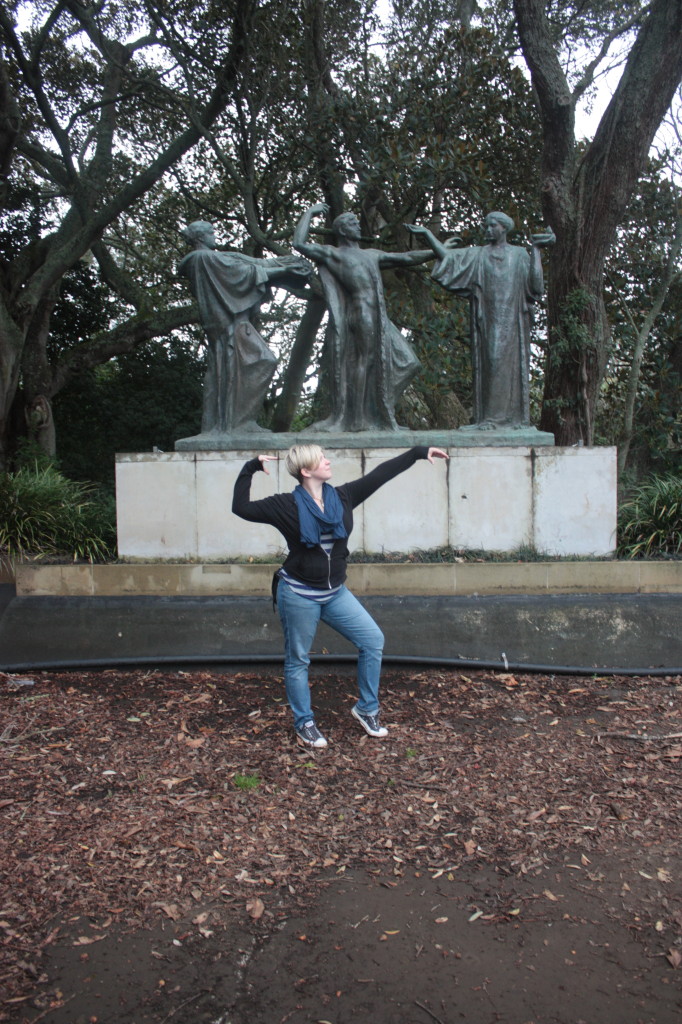 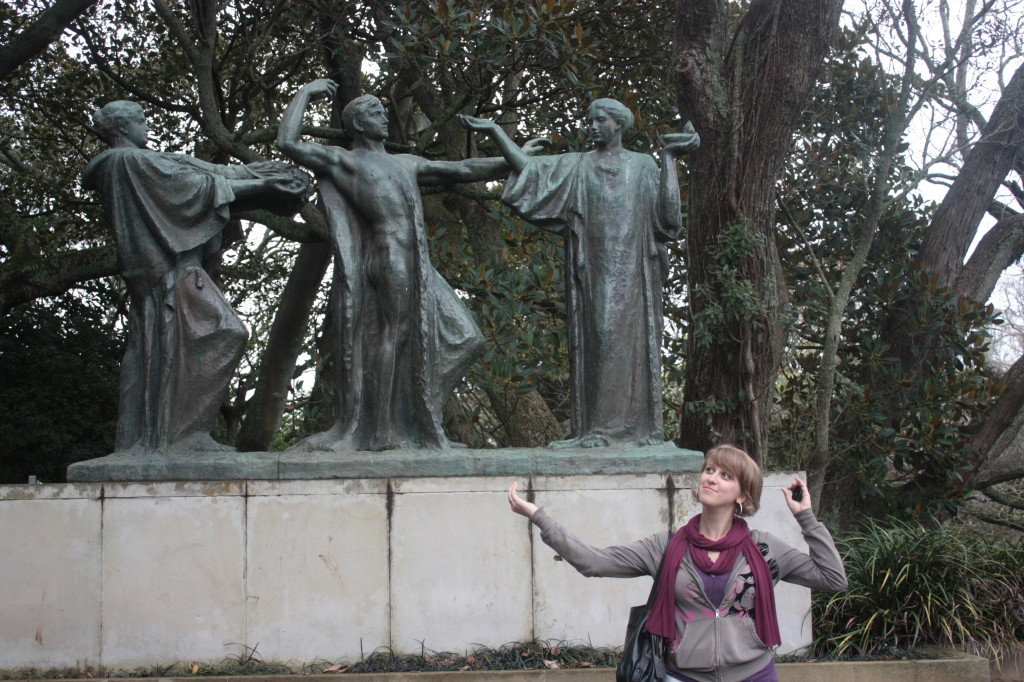