It’s been two days since Kathleen took off, and so far I’m still in one piece. I haven’t managed to get hit by a car just yet (despite always forgetting they drive on the opposite side of the street here). I haven’t gotten robbed or mugged. I haven’t gotten dreadfully lost or missed a bus or checked out/in at the wrong time of a hostel. So far, I’ve been golden.

Lacking in conversation and camaraderie, sure, but hey, I haven’t accidentally killed myself, and that’s gotta count for something. 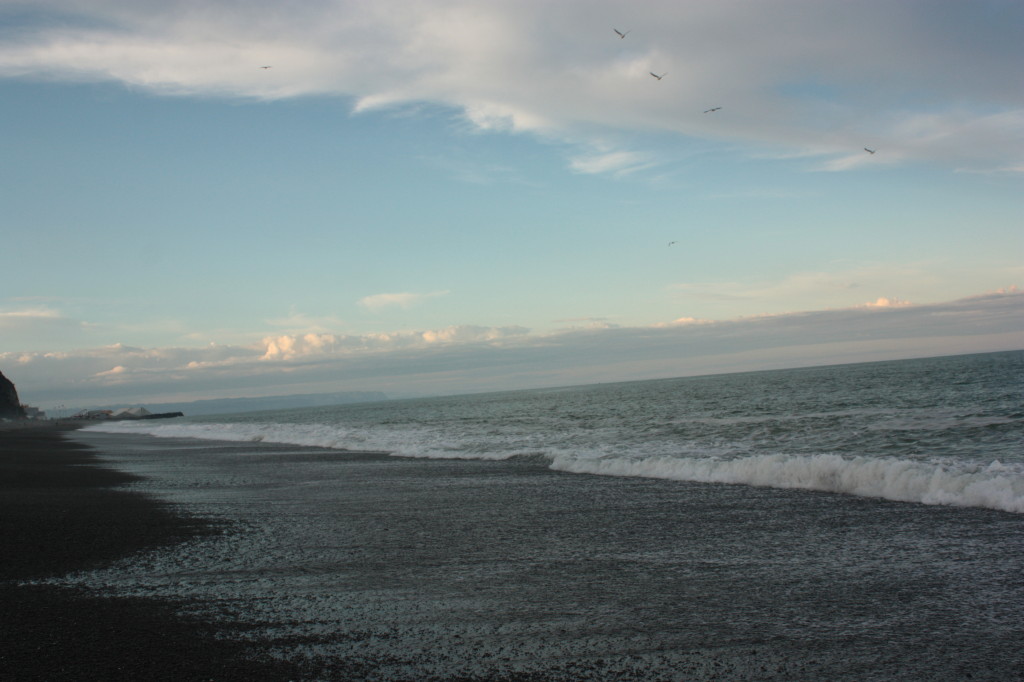 Thursday morning I decided I wanted to tackle Rangitoto, a small volcanic island off the coast of Auckland. Knowing that I’d have to take a ferry in order to get there, I strode down to the wharf (first stopping at Starbucks for some good ol’ fashioned coffee and WiFi) and purchased my ticket. Unfortunately I then had an hour’s wait, which I passed by playing Plants vs. Zombies, listening to my New Zealand playlist, and taking creepy pictures of strangers. 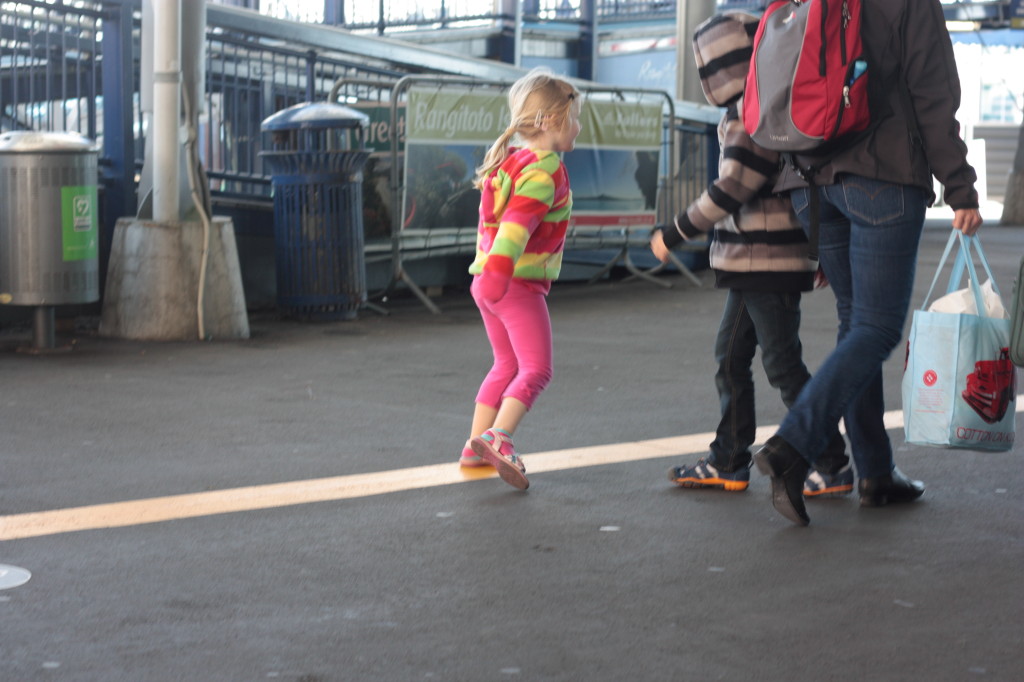 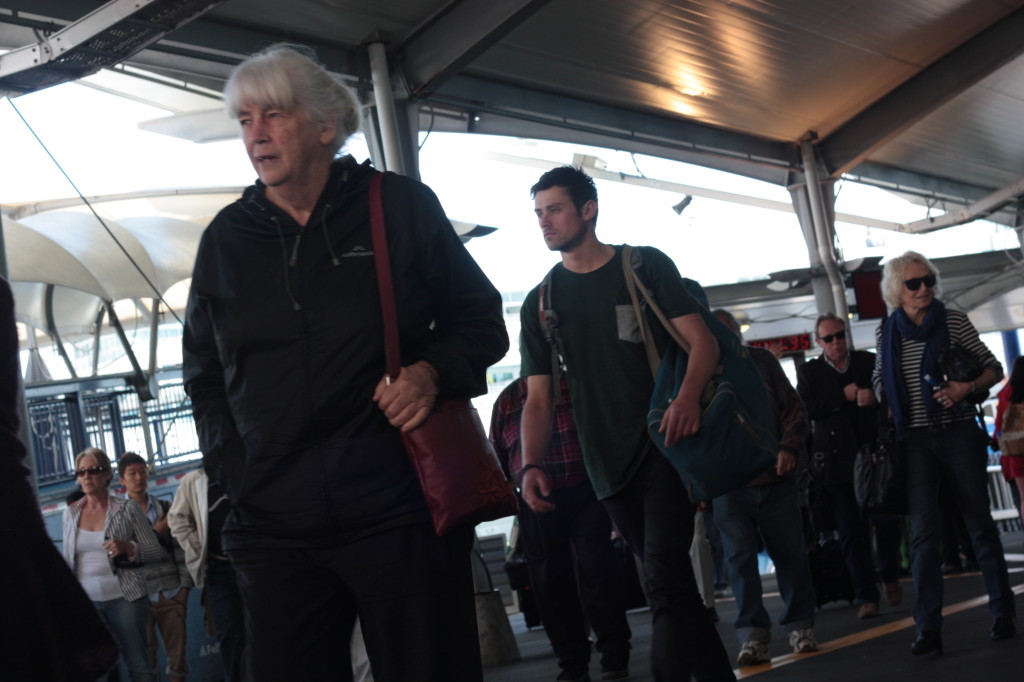 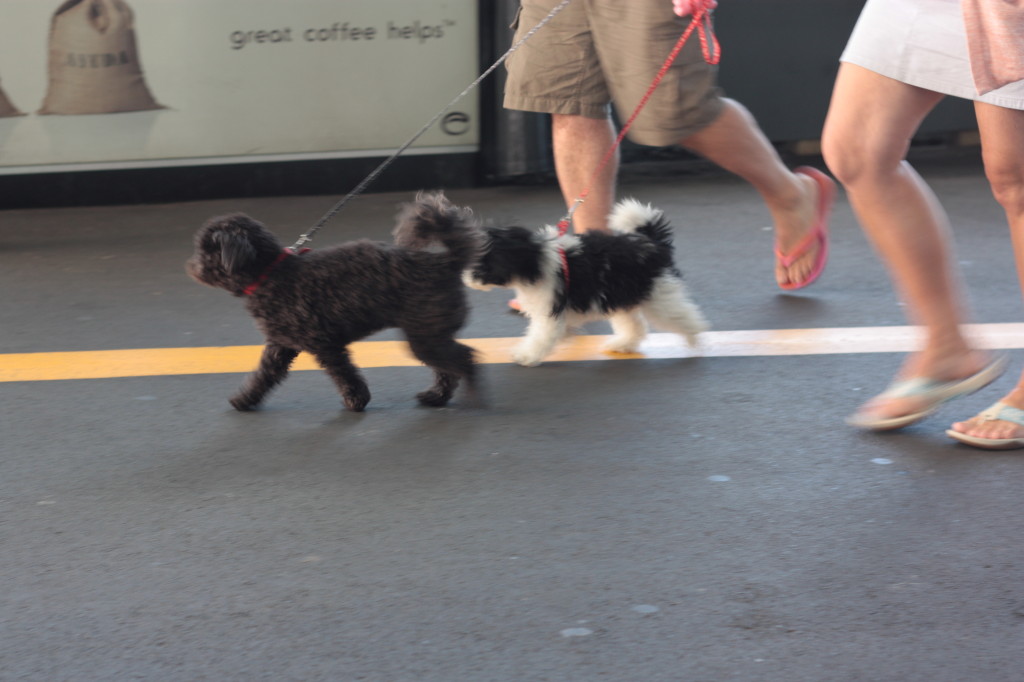 Soon enough, the boat arrived. The top deck was crowded with people, but I was determined to get a good view for the trip. Auckland may not be my favorite place in New Zealand, but damn does it look picturesque from far away. 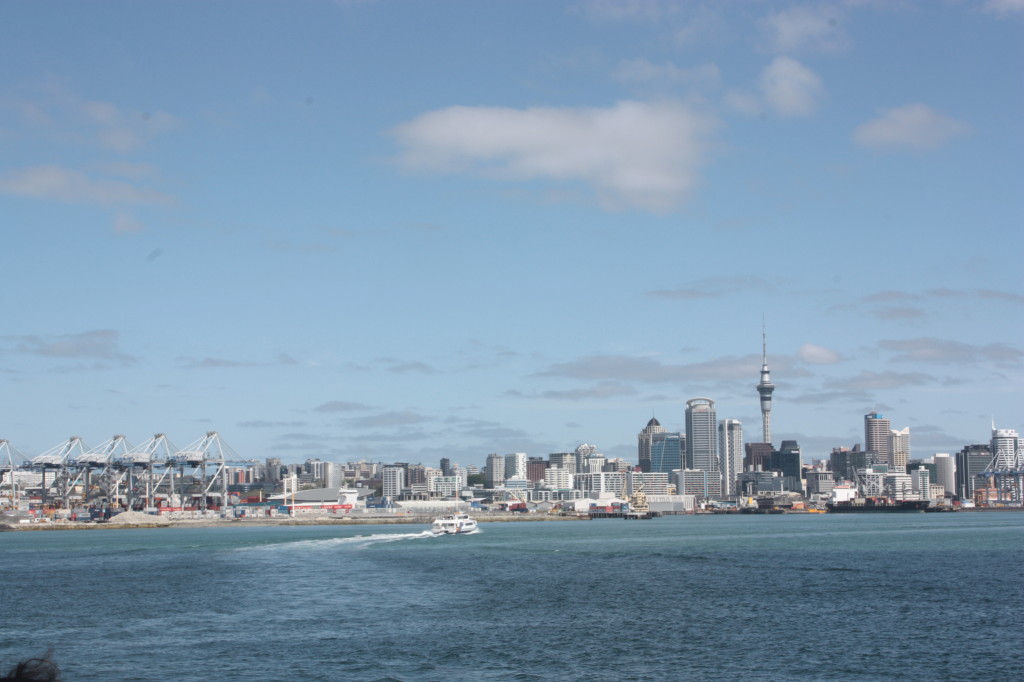 After about a half hour or so, we came up to the island.

The hike as a whole was great. I had kind of hoped I’d find someone to walk with, seeing as there were quite a few people around the island in my age bracket, but that didn’t happen, and that was okay. It’s fair to say that hiking’s a little less fun on your own, but even so still a worthwhile experience (though it did make me miss Kathleen – but what doesn’t?). I walked the Rangitoto Summit trail, and during the hike I learned the following things about myself and hiking solo:

Besides those little tidbits, it really was an amazing hike. I purposefully didn’t bring headphones with me, so I got to think over a lot of things (mainly the trip thus far and an upcoming podcast I’m working on with Lara) and just admire the beautiful scenery. 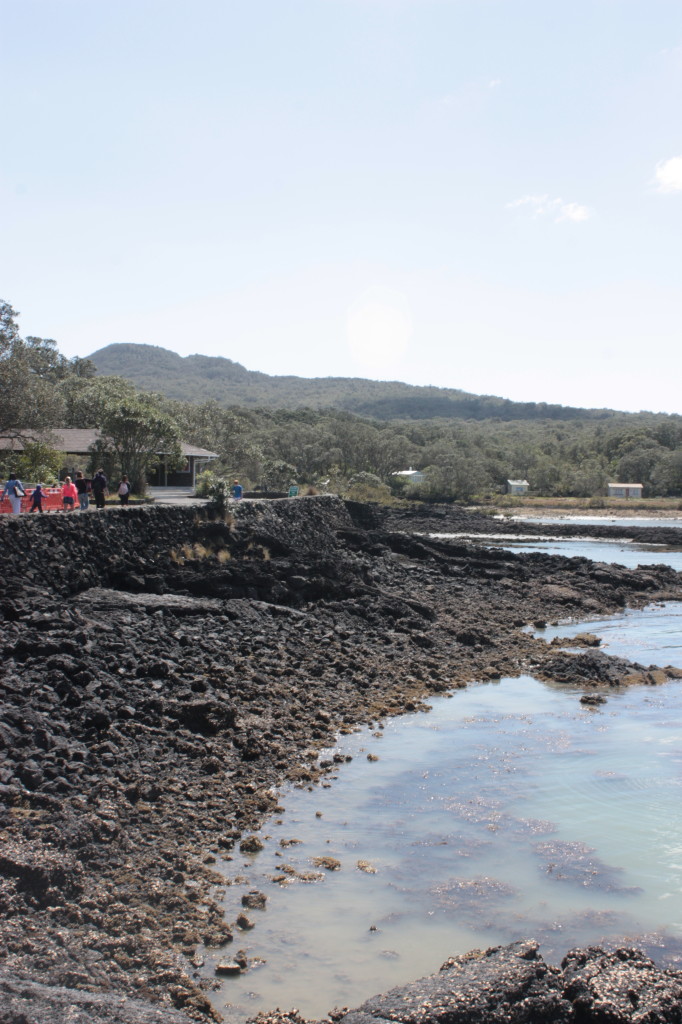 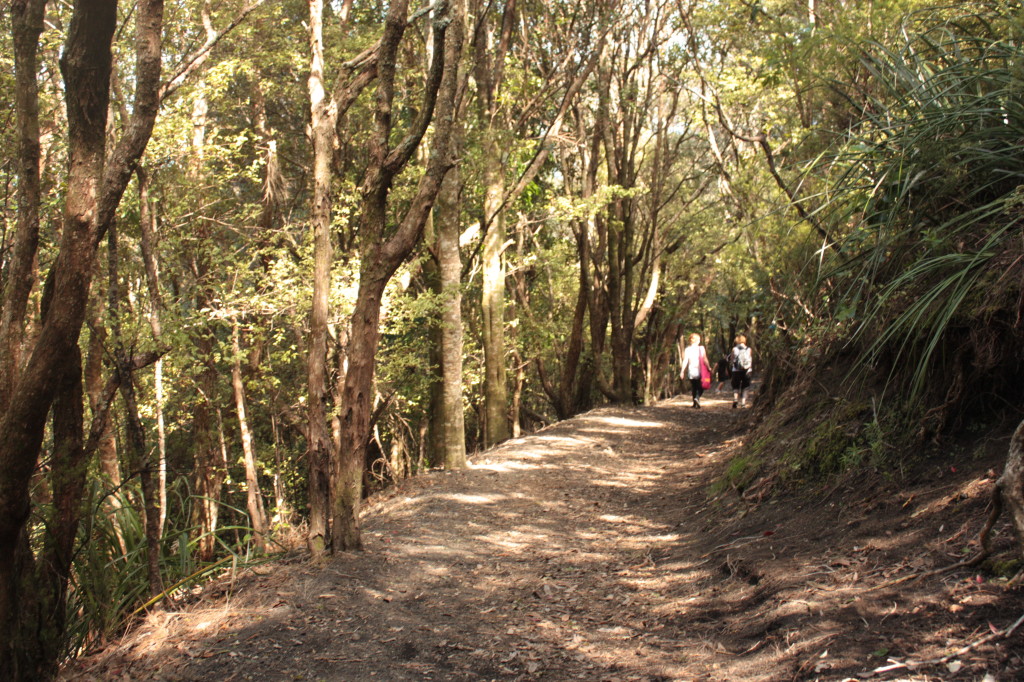 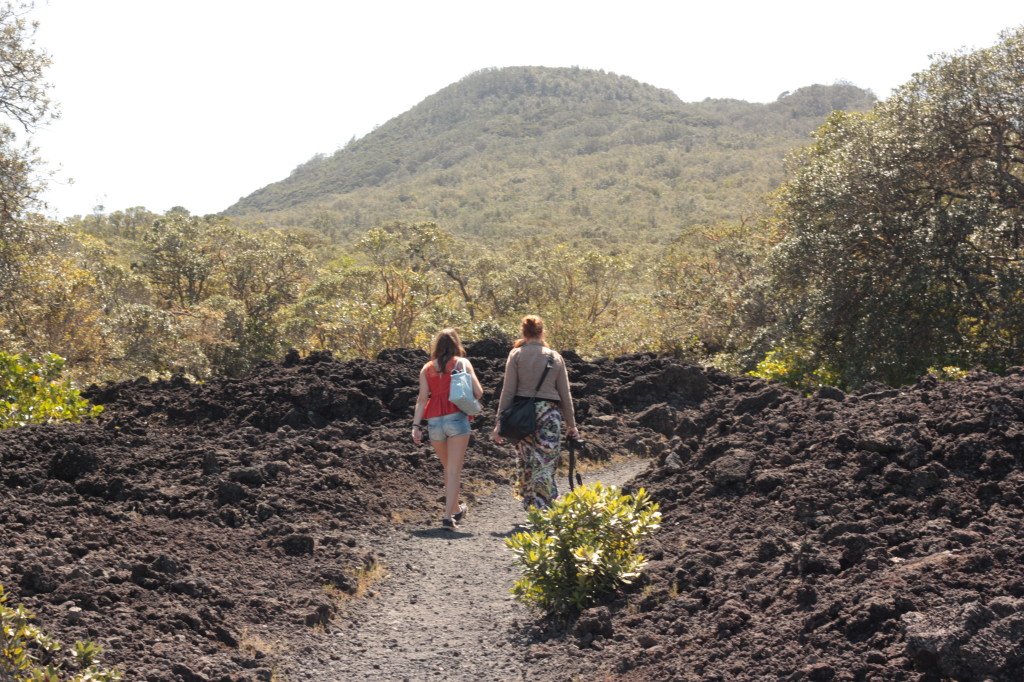 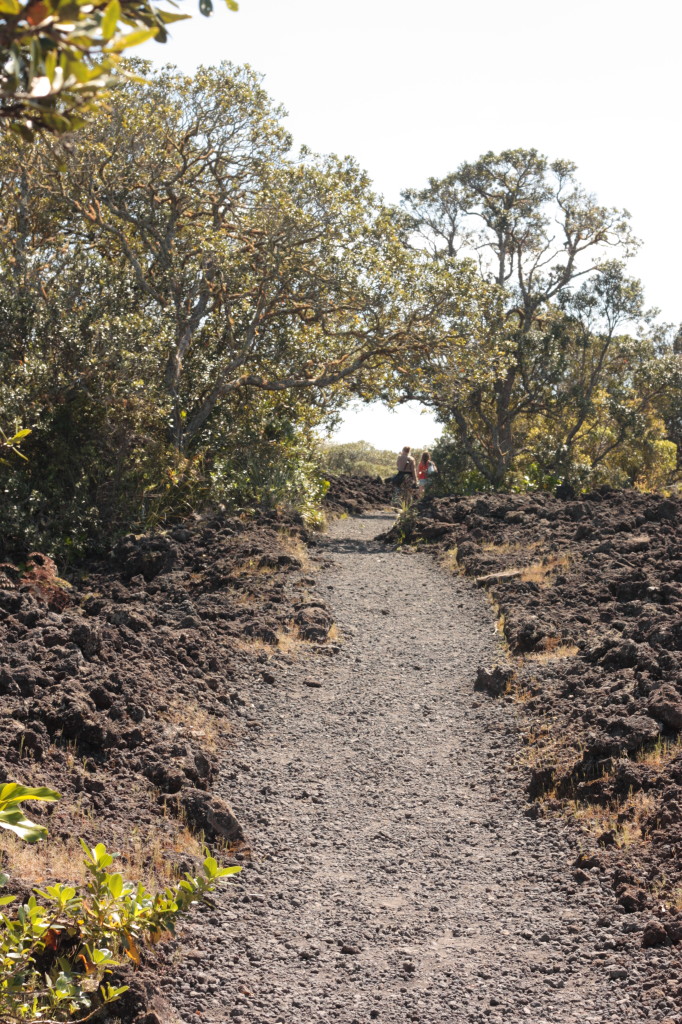 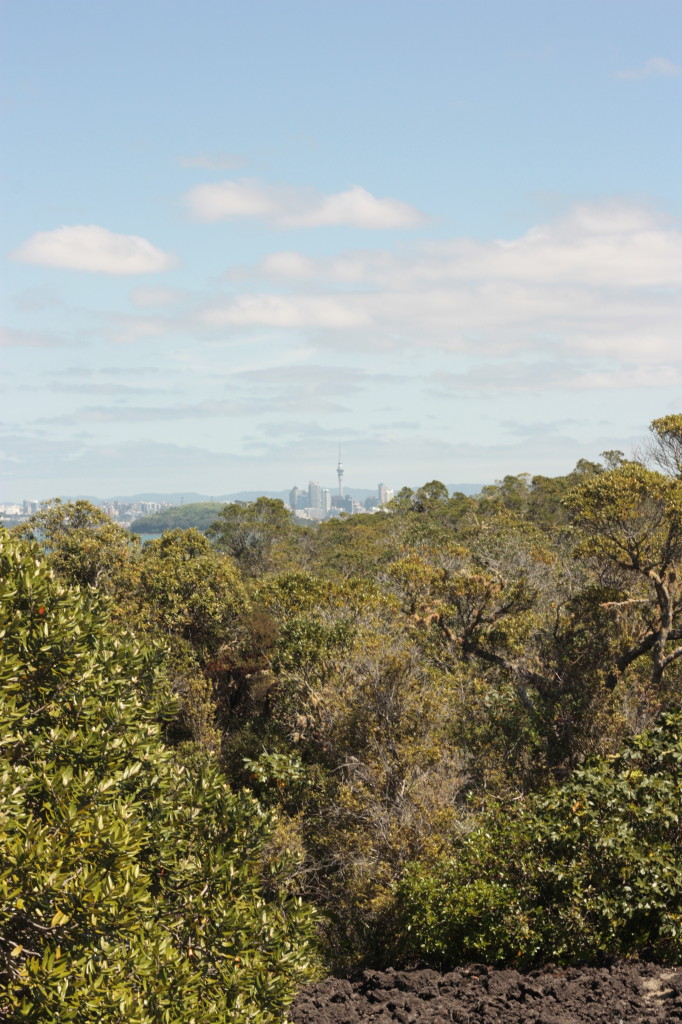 I made it to the top drenched in sweat and a big, goofy smile on my face. Hikes are really much more satisfying when there’s an awesome lookout point at the end, aren’t they? It’s like, “Oh, you just walked up hill for ninety minutes and you now smell like moldy cheese? Here, have a seat, drink some water, and look at this bitchin’ view.” I mean, look at that view. 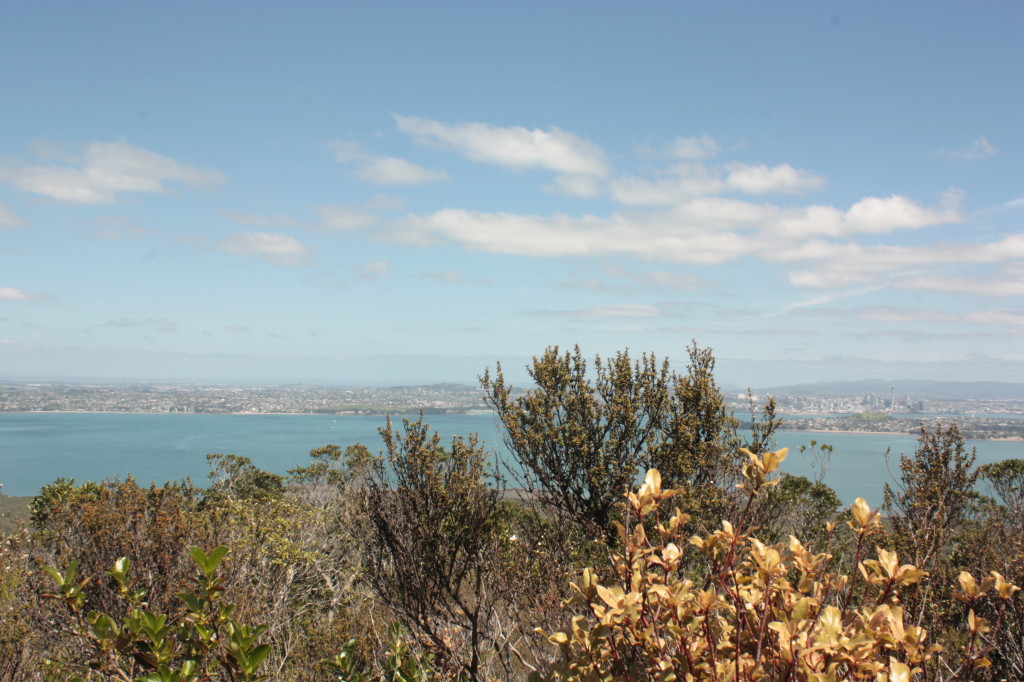 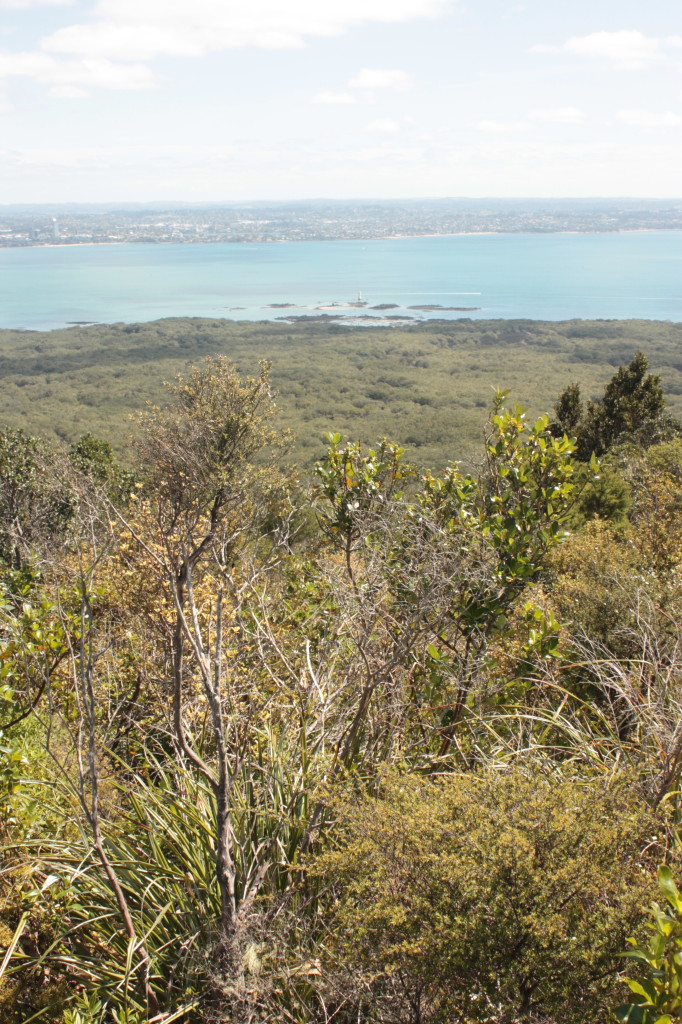 The warrior after she ferociously conquered her hike.

For my last night in Auckland, I attempted to go out. I’ve never really been out drinking on my own before, so I thought I’d give it a go. Unfortunately the town was pretty dead… or maybe I just didn’t stay out long enough. Anyway, I did get to have an awesome drink at least. Wicked is playing in Auckland right now, and the bar connected to the theatre was serving Wicked themed drinks, so naturally I jumped right on that.

So have another drink of Green Elixir and we’ll have ourselves a little mixer.

This morning I was up bright and early to catch my bus. A 7:45am bus to be exact. Who the hell decides that buses should run that early? Delusional, morning people, that’s who. Ugh. They’re the worst.

The bus ride was… uneventful. Incredibly so. There was a screaming baby and I ate lunch at McDonalds. There. That’s everything that happened during my eight hour bus trip. Oh. I also listened to this song fifty-seven times in a row. I shit you not. Fifty-seven times. The only reason I stopped was because my computer died.

The bus brought me back to – drum roll please – Napier. I’m only staying here for one night, as I’m heading down to Wellington tomorrow to start the – ‘nother drum roll – apartment hunt. I contemplated doing the trip from Auckland to Wellington in one day, but it’s a thirteen hour trip, and the idea of spending thirteen hours on a bus makes me want to chuck myself off a building. So I thought I’d half the time for two days and do a stop over in Napier, a town Kathleen and I visited back at the beginning of August. I enjoyed my stay well enough last time, so coming back for a seventeen hour stay seemed reasonable enough.

I got checked into the hostel, then decided to go on a run. Word of advice: if you’re a regular runner and then stop for, oh, say, an entire month, your body is going to hate you. A lot.

After apologizing to my body with a nice, hot shower, I hit up my favorite part of Napier: the beach! 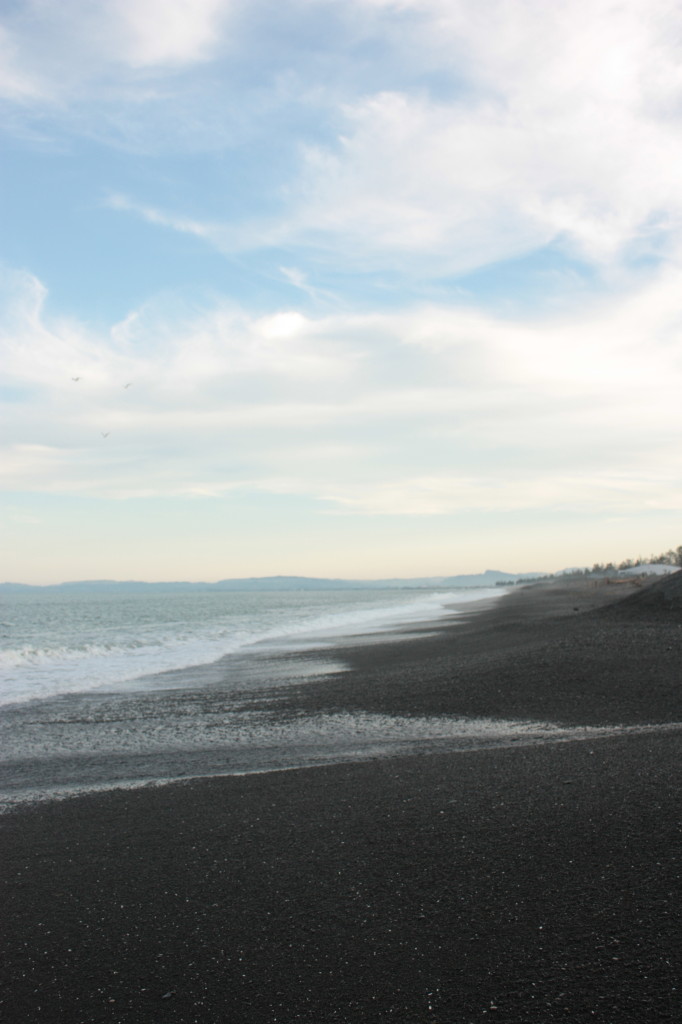 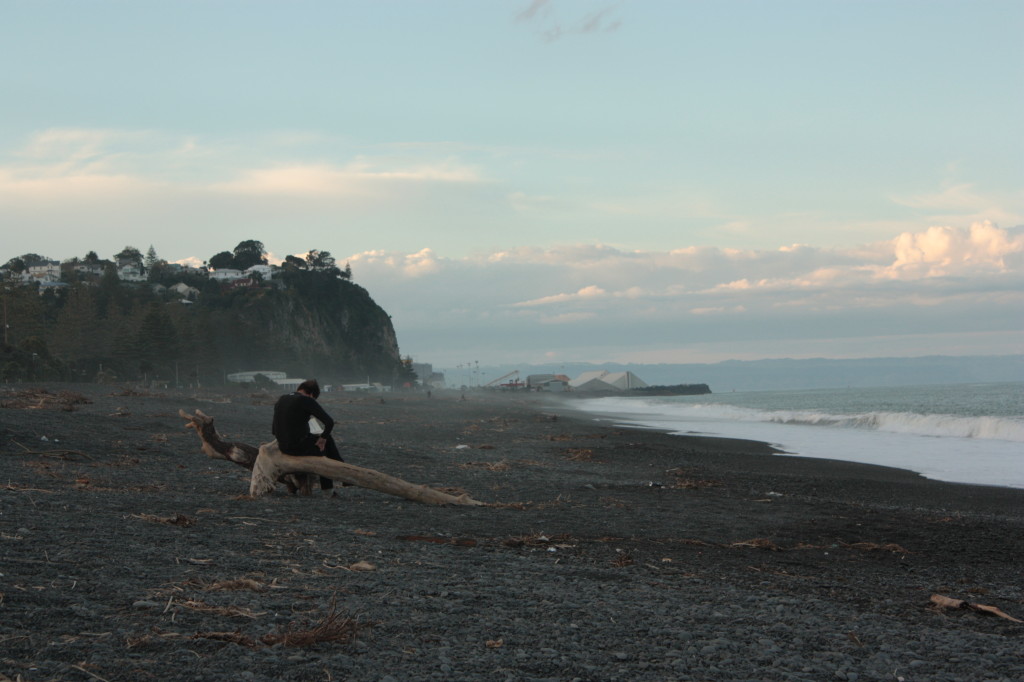 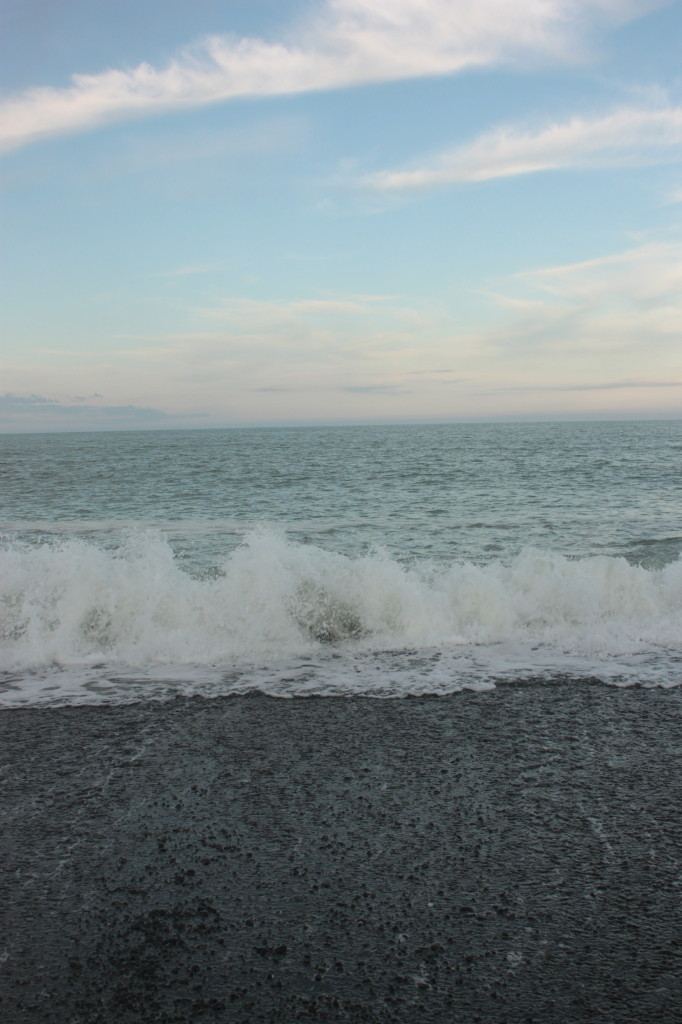 What a change from last time! The weather was awful when Kathleen and I came here in August. It was rainy and windy and just not good beach weather. Today was gorgeous though. Tank top and shorts gorgeous. I even went into the water; however, I horribly misjudged how far in the tide was and ended up getting thigh-deep into the water, which resulted in me screaming and making a buffoon of myself in front of some locals. Oops. 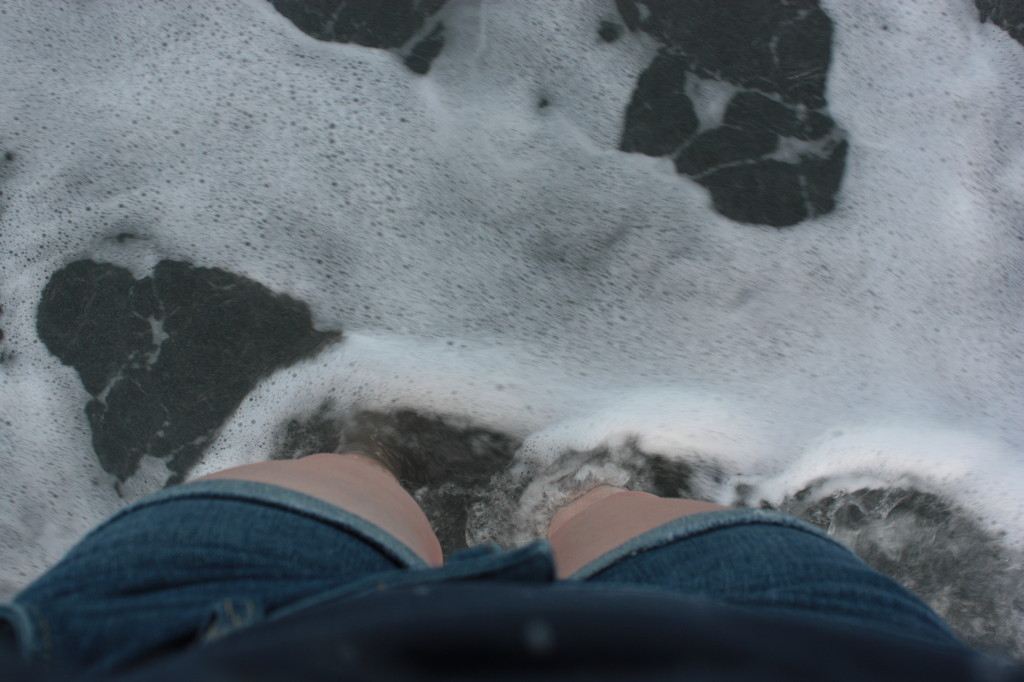 I walked around town a bit, happy that it lived up to the memory I had of it. Napier was the fourth place we visited, and it was so long ago that I wasn’t sure if my view of it would have changed. After all, I’ve seen so much more of New Zealand now. It would only be fair if I thought differently of Napier after seeing some of the other grand areas this country has to offer.

But nope, I still love me some Napier. I don’t think I could ever live here, seeing as there’s not much to do, but I could probably do a longer stay than just a couple days. It’s one of those places that I’d like to have a vacation home to visit, y’know? It’s so quiet and peaceful here, which therein lies part of the problem. It’s too quiet because of how small the town is. I think I romanticize small towns. Something about so many movies and books being set in small towns makes me think I’d love living in one, when in actuality I know from my time in Ashland that I can’t do small towns for long periods of time. I get jittery; I start to lose it. I am a big city gal through and through.

But that still doesn’t mean I can’t appreciate the beauty that is Napier. 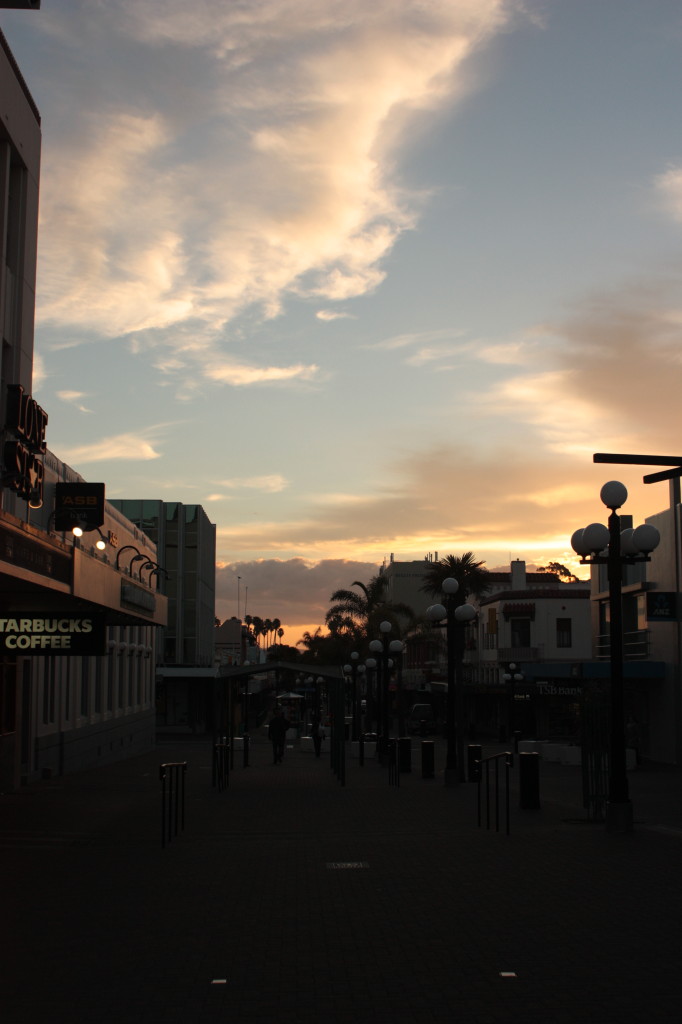 These past two days have been interesting. I’ve barely interacted with anyone in person, save for employees at stores/restaurants and the roommate I have here in Napier. It’s such a big shift, going from having someone to chat with 24/7 to having no one. It’d be a lie to say I don’t miss that; Kathleen at my side, prodding my butt and explaining her plans for kidnapping Richard Armitage. It’s impossible not to miss her. I admit, when I was riding the bus this morning I had a moment where I looked at the empty seat next to mine and just felt my heart wilt at the sight of it. That’s where Kathleen should be sitting, rang through my head.

BUT, despite missing Kathleen terribly, traveling solo hasn’t been quite as horrifying as I thought it would be. Sure, there’s a lot  more indecisiveness now that I don’t have anyone to discuss plans with, and there’s a huge lack on the conversation front. But it’s actually kind of… fun? I feel guilty saying that, cause it was even more fun being with Kathleen. I guess it’s just different. I find I’m now more aware of my surroundings. I look at people who go by and I listen to the sounds of the cities. It’s like I’m seeing New Zealand from a whole new angle; an exploration started fresh.

I’m not going to be alone for much longer though. As already mentioned, apartment hunting is happening soon, which means reuniting with Cheryl tomorrow afternoon in Wellington. I’m thankful that I’ll be with someone who I can have actual face-to-face conversations with, but I do want to make sure I spend some time in the city on my own as well. Just to keep that feeling of exploration going. 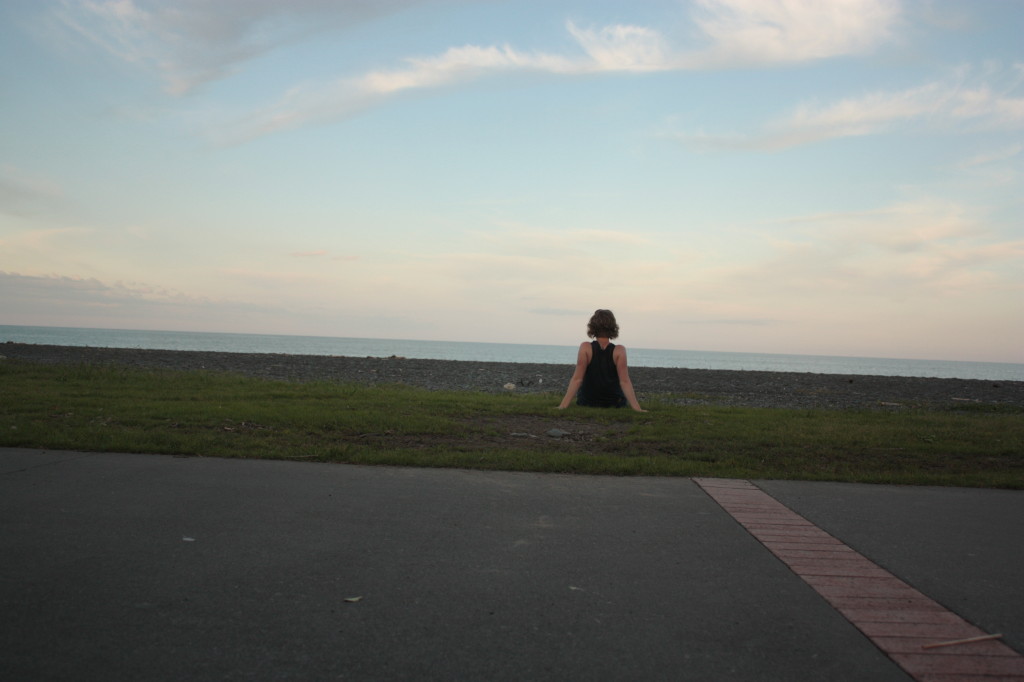 Before I wrap up this entry I thought I would share one last thing.

Back in June I wrote myself an email and then sent it to current-me through the web-site FutureMe.org. It’s basically a super long letter that talks about how past-me is about to graduate and how she’s feeling, and then advice for current-me about how to enjoy New Zealand once Kathleen’s left. I’m not going to share the entire thing on here because, hah, I have family that read this blog and it’s vastly inappropriate in many ways, but there was one bit at the end I thought I’d share. It’s the second to last paragraph in the letter, and it focuses on traveling by myself:

You’re going to be okay. Come on, deep breaths, girl. I’m gonna use the A word now, so, brace yourself, cause it might hurt. Adult. You are an Adult. I know you hate that word, but it’s true. Kathleen’s gone and you’re on your own, but you are an Adult and you can handle this. You’ve got credit cards. You’ve got debt. You know how to balance a budget. You can put on contacts without looking in a mirror. You sometimes get paid to write. You once successfully made a chicken pot pie. You’re the most kickassity adult around. Don’t let the world tear you to pieces with fear that you’re incapable of taking care of yourself and being on your own. Trust me. You’re going to be okay.

Not bad advice, if I do say so myself. 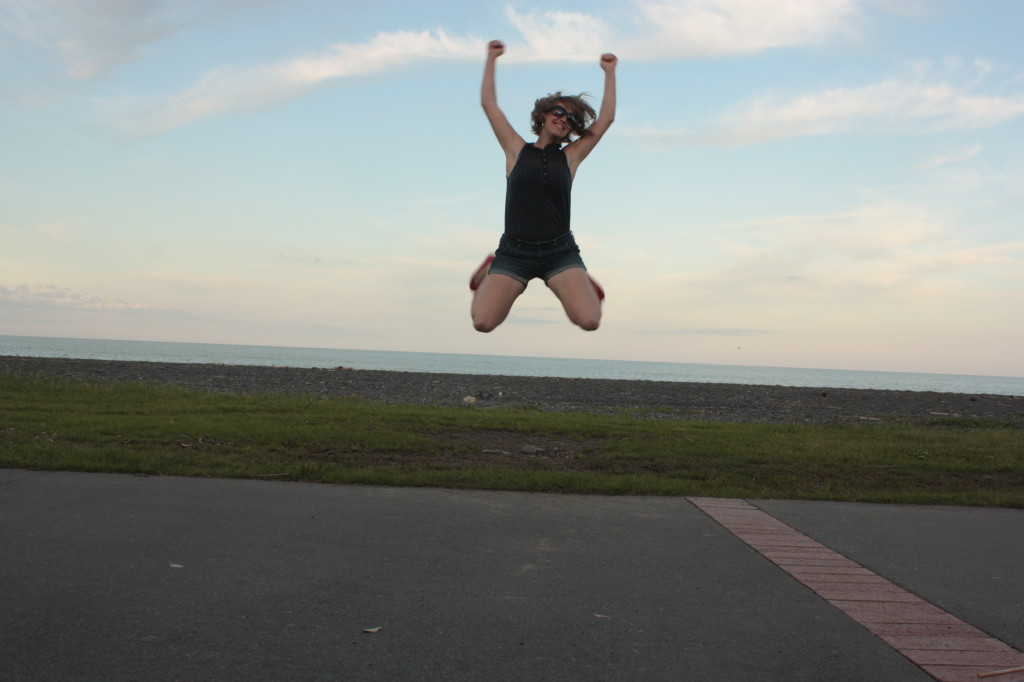